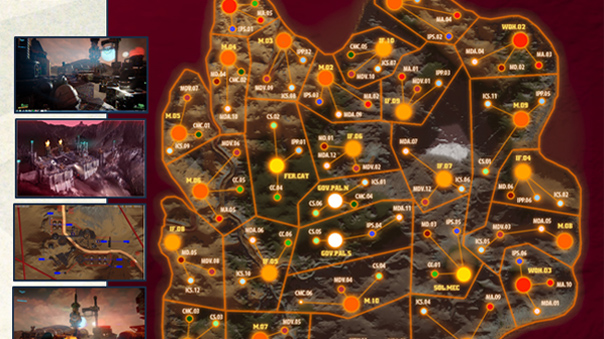 Behaviour has revealed an ambitious plan for their upcoming sandbox MMOFPS, Warhammer 40k: Eternal Crusade, detailing how matches deciding control of territory and resources will play out. While to understand the full details of the system, it’s best to check out the extensive overview below, we’ll do our best to sum it up for you.

The core concept is that Warhammer 40k: EC’s factions will vie for control of a 16x16km open world connected continent. These battles will be dynamically generated based on the terrain layout of the zone to create the potential for up to and beyond 120 unique battlegrounds for battalions to duel over.

Depending on the number of players contesting the zone, these battles will be fought over lesser outposts in 100 man skirmishes. If the invading force can successfully take two outposts, a new stronghold battle will unlock with much heftier defender bonus structures in place. If the assaulting force takes over the stronghold, the entire zone will swap hands to the assaulting team.

Beyond launch and as the playerbase hopefully rises, Behaviour intends to remove the artificial segregation between zones during battles to open up much larger 200-500 player battles for control over an entire territory or even multiple territories at one time.

For more information on the various factions and continued development of Warhammer 40k: Eternal Crusade, check out the official website.