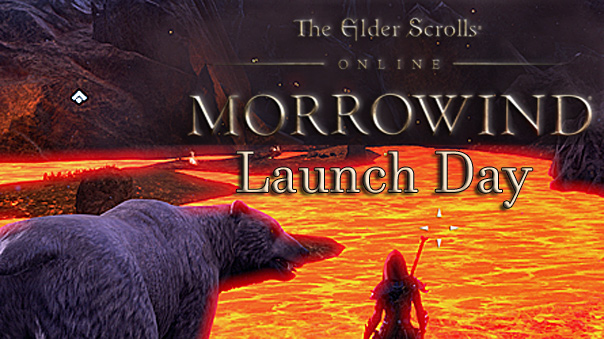 I remember when I first played Elder Scrolls Online. It was a chaotic, rough time. So many issues with the game, so many unhappy players that “wanted online Skyrim”. I made a pretty bold [some have said mean] prediction that it would go free to play. It did, though, and I think the model was a much better one for this game. So, time rolled on, updates came and went. Then, everything changed: One Tamriel happened. The whole world opened up! Now everything scales, everything became better. My interest was once again vested. Fast forward to my trip to Zenimax Studios, when I got to see first-hand what would become Morrowind. It was huge! I hated not being able to talk about it. Now personally, I did not play Morrowind when it was popular. But I know dozens of folks who did, and when the news broke, they exploded with joy! A high-resolution version of Vvardenfell, where they get to help unravel events that would lead up to Morrowind itself? Up until now, ESO had updates, mini adventures, things like that. Thieves Guild, Dark Brotherhood, content like that, but nothing on this scale. But the world of Nirn had been confined just to a certain amount of land. There are lands we have yet to explore. However, The gigantic island of Vvardenfell opens up with Elder Scrolls Online: Morrowind. This is far more like the original Morrowind, Oblivion or Skyrim. You have choices, you don’t have to just follow the one path that’s set before you. 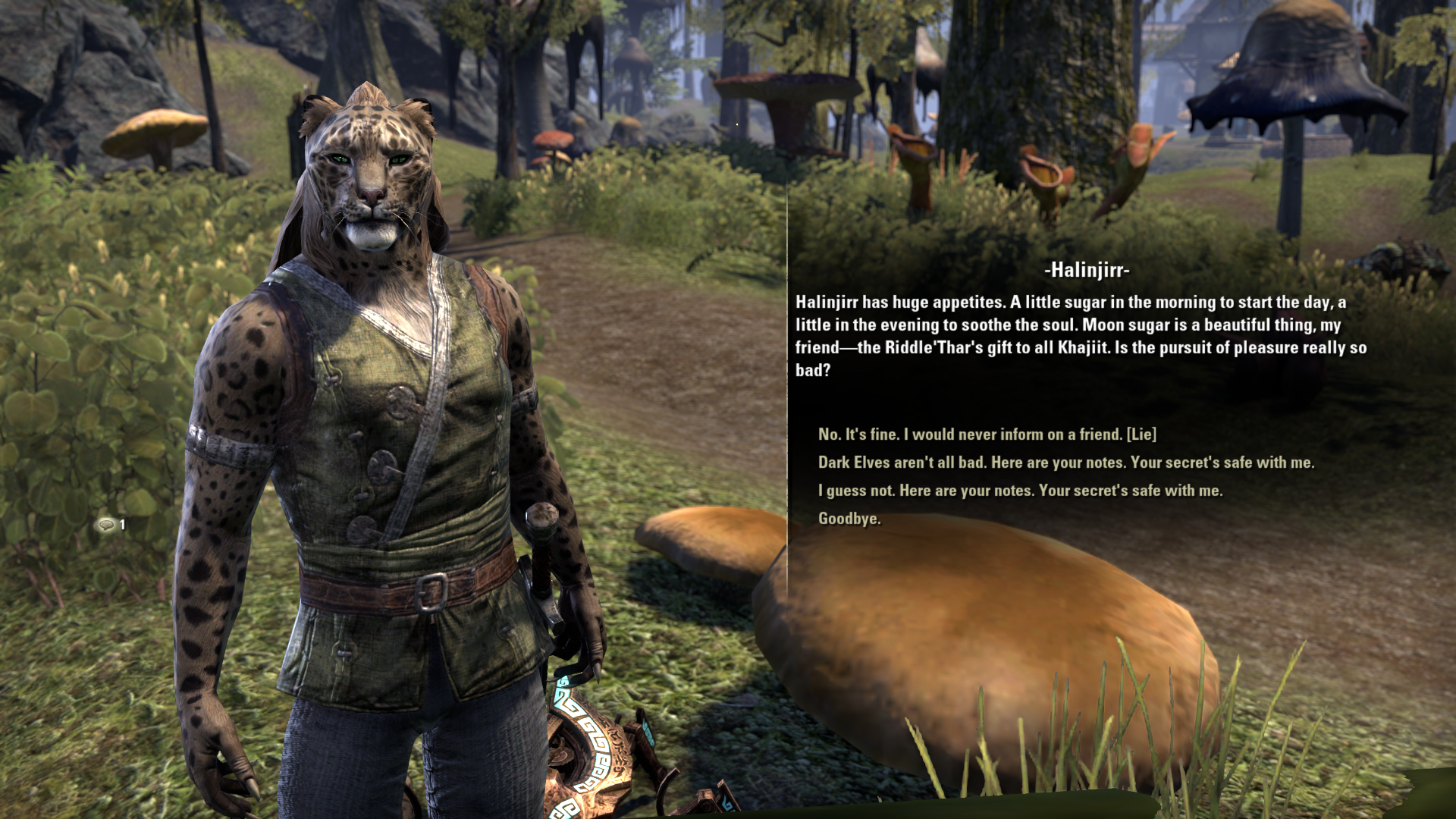 That’s what makes ESO: Morrowind stand out to me. You can lie to people, try to persuade them, pick sides and while yes, there is a main story, there are so many damn things to do all over the island. You might decide you’re bored in one area, so you wander off elsewhere, like you can in the main game, the pre-expansion stuff. One thing that I know Morrowind fans will appreciate is all the little nods to the actual game. Narya’s a main character, the lore characters all feel credible and it all makes sense. Even if you’re playing a Dunmer, they aren’t fooled that you’re from the mainland. There’s a very real feeling of insularity and xenophobia on this island, but somehow they wind up trusting you [because of main character reasons]. Your ultimate goal is to aid Vivec, even if you don’t want to. Even if you hate him, he’s basically holding the entire island of Vvardenfell hostage. If he should weaken, the island dies under that massive hovering rock. You as a character are essentially forced to help Vvardenfell, which is a sincerely interesting approach to an expansion. And that’s what this is: An expansion, not just a minor content update. 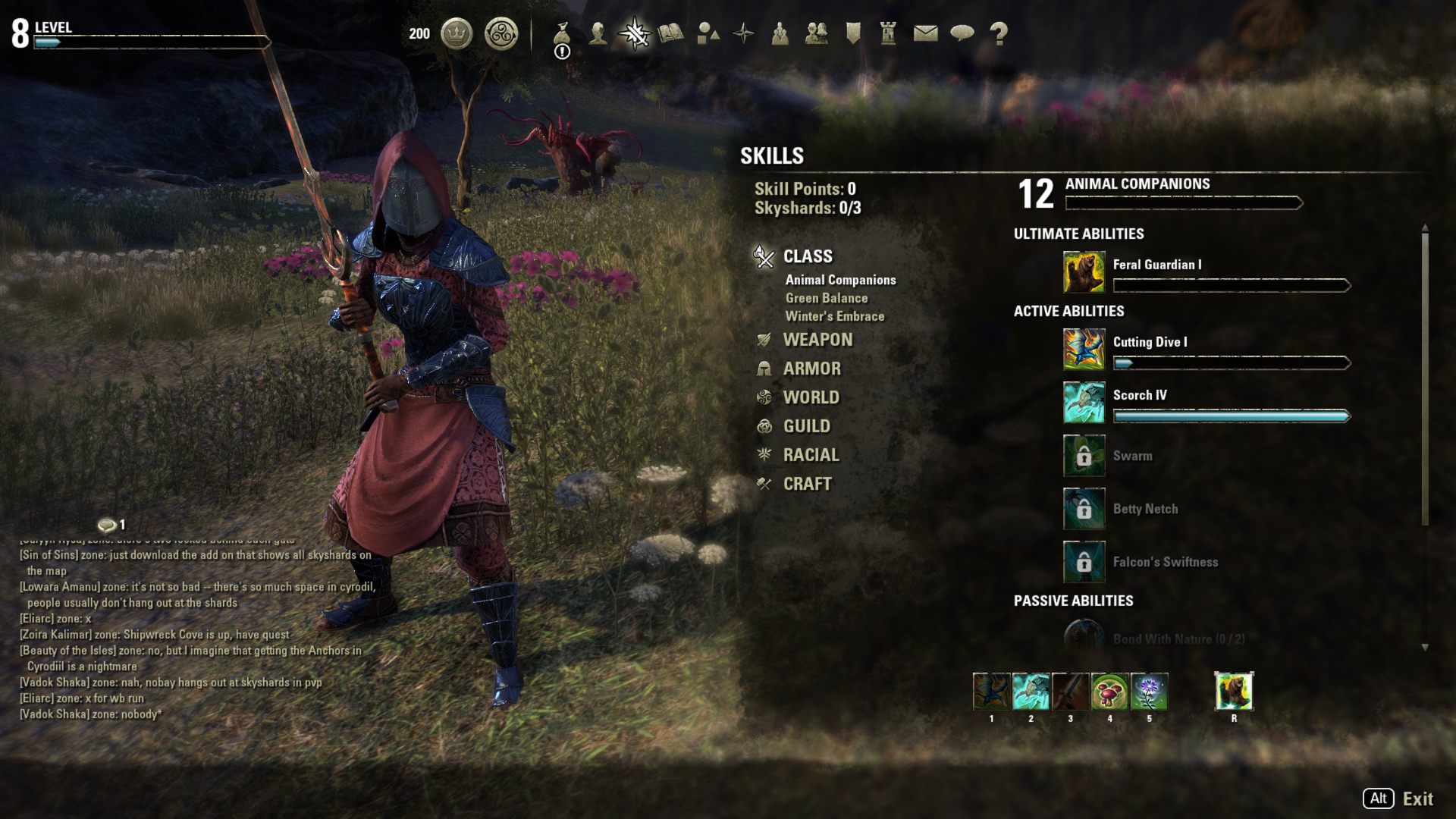 Come on. YOU GET A BEAR. What more do you want!?

MMOs don’t get new classes just every day, and any time that a new one is added, there’s always the fear of balance, making sure it fits – not only the world but the lore. Luckily the Warden is something that the ESO audience has wanted, something that fits, and frankly, does not feel overpowered to me at all. I’m still leveling mine, but I do enjoy the class. The Warden fits the Elder Scrolls style of “be anything, do anything.” It’s probably my favored class in Elder Scrolls Online so far.

Animal Companions are more of a DPS tree. You get a bevy of animals that show up and attack, harass, and aid you in your quest, not to mention a gigantic combat bear to fight for you. It’s your Ultimate, so hitting it once is all you have to do. However, it does have a second use to deal lots of damage, and even more to enemies under 25% health.

Green Balance though is a pretty ludicrously powerful healing tree [pardon the pun], culminating in a huge forest that heals everyone in it, that includes a very helpful HOT. I’m not wild about the ground heals as a DPS primary though. What I do like in this tree is Lotus Flower, which adds a heal to your Light and Heavy attacks [or an ally] for 17 seconds base. Now that’s useful, even if I do use a heavy weapon like me.

Winter’s Embrace is the tank tree, where you wield the angry forces of winter to protect yourself, slow the others, and protect your allies. Their ultimate power does all of these things at once. It’s quite potent as a Trial/Delve power. I have not used much of this tree because one of the things I try to do is figure out where I want my points as to not waste them, or pick skills I have no intent of using.

One of my criticisms about ESO is the small list of usable skills you can have at once, but at least they’re all pretty strong. They might seem pretty straightforward, but the powers have lots of customization, and the paths work well together. There is a lot of experimentation to be done and, speaking of skills, there is another fun change to the game along that path. One of the bonuses of ESO is that you can wear and equip what you like, and you’ll gain the skills of those weapons in addition to the other army of them. If you equip three pieces of armor that are of the same type, you’ll unlock the armor skills of that type, Light, Heavy, whatever. I do like that, having yet another way to customize my experience. 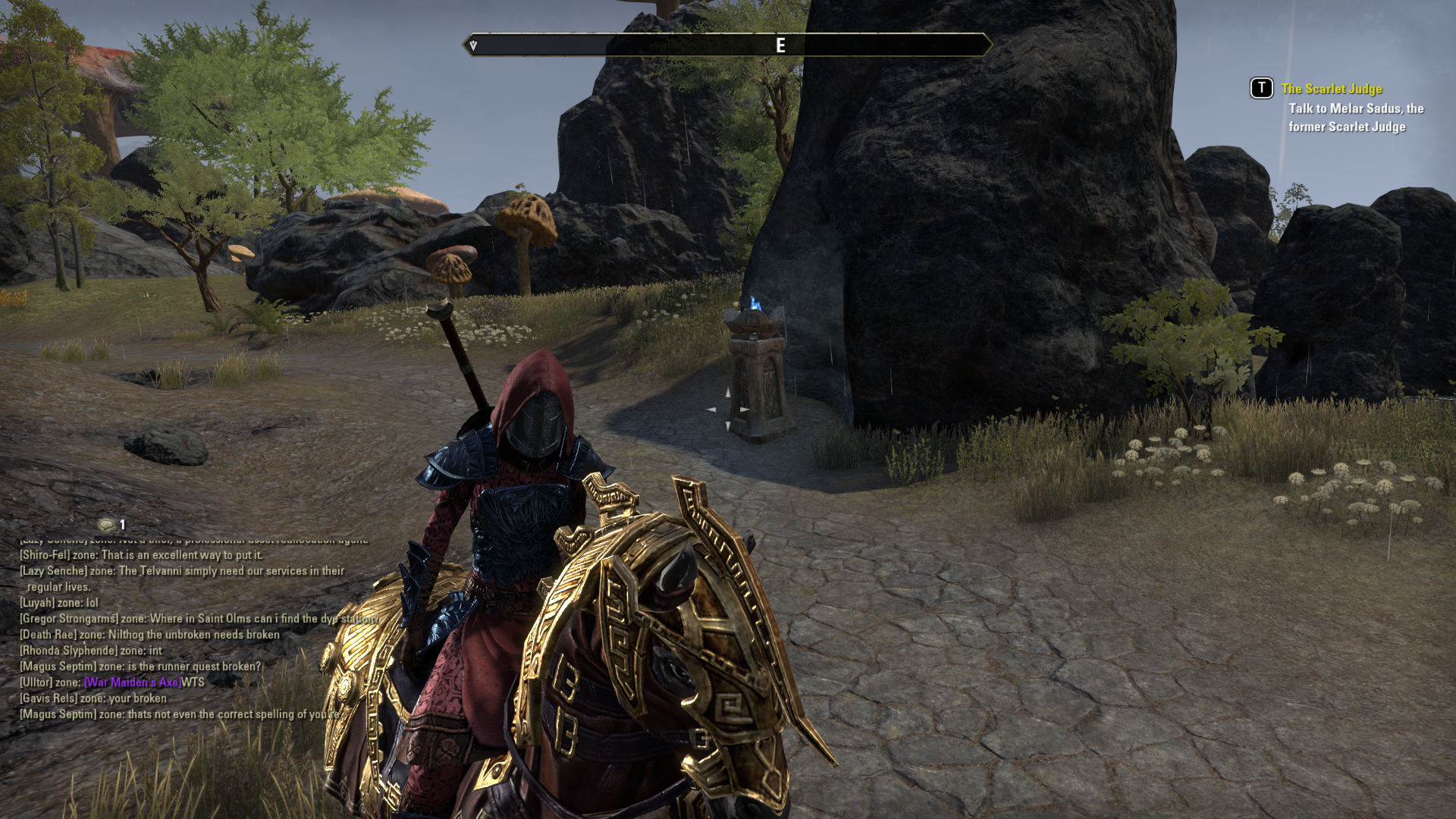 Sometimes you just have to show off.

So we have a whole massive island, filled with stuff to do. There’s a Main Story, with a goal of saving Vivec, and there is always meddling with local affairs that you have no business in. But that’s the perk of being a hero, yeah? There are literal mountains of quests to do while you travel this gorgeous land [and oh lord, is it ever a beautiful world we have], and in addition to that, you have little mini-dungeons, caves and such to wander through for quests and exploration. But is that all? Of course not! There are six new Delves, and two new Public Dungeons for you, in addition to amazing, intense world bosses that you can see on the map, just waiting for you. Delves, for those who don’t know or are new, are dungeons that typically have a quest attached to them, and you can do them on your own. Public Dungeons are for groups of players to tackle solo and feel more like a traditional dungeon in an MMO. Packs of mobs, several challenging bosses, et cetera. Some might think that is not enough, but I don’t really agree. There are tons of set bonuses for you to get just in the world, as well as plenty of content to do and for launch, six is plenty. Just remember, this is launch content. I could not see them just putting these in and nothing else forever. The story has to evolve from here. Figure I’ll help you find them too because that’s what I’m here for: 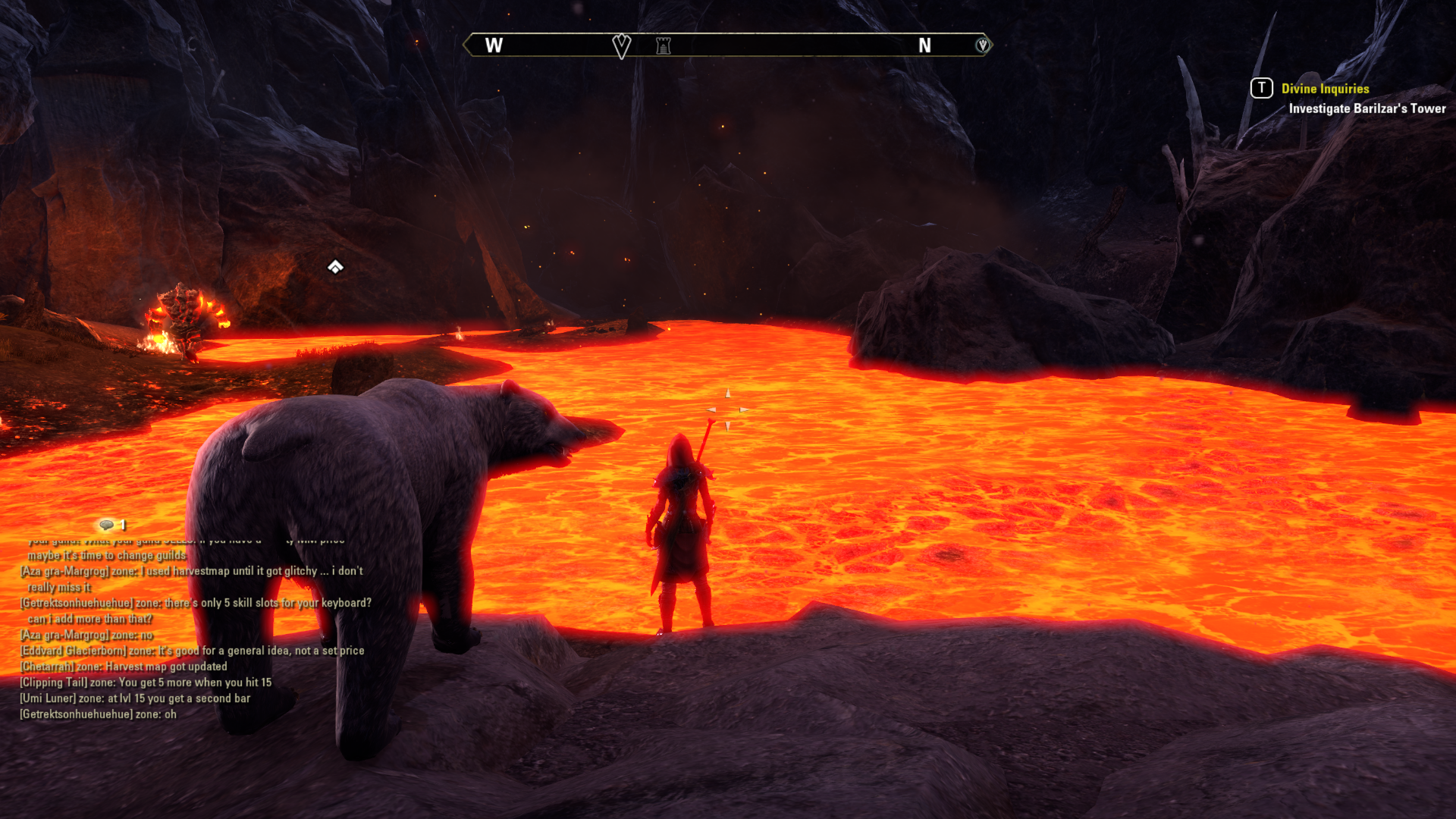 It's over Anakin! I have the high ground!

There’s also a new Trial coming at launch, which is basically a raid. Twelve players are recommended, and this one is the most visually appealing to me. It’s The “Halls of Fabrication,” and the goal is to uncover the secrets of Sotha Sil’s experiments, led by the famous [and totally not at all evil] Dunmer Sorcerer Divayth. I haven’t done this just yet because I’m not level capped. I’m spending too much time wandering and basking in the glow of this world. It’s such a beautiful expansion. From everything I’ve heard, Divayth will give you hints on the mechanics, and if you aren’t paying the utmost attention, you’re going to be in for a bad time. The focus is on the boss encounters, and learning them is key But don’t rush to it! This does lead me to one of the only things that I frankly don’t care for, is I do admittedly feel like Morrowind a bit of a slog. The exp grind has been pretty slow, and in a lot of MMOs I try to rush after having played for a while.

This is an experience though; I feel like taking my time to get to level cap and do the end-game content isn’t really so bad, but it can feel like a bit of a haul to level and figure out what the percentage is for a skill going up. It might be because I’m just not “good” at Elder Scrolls Online; I don’t take advantage of things I should like exploring for Skyshards for more skill points. It does feel like there’s a bit more gold going around than in the base game though. That is one of the common complaints I hear, that it can be hard to make money for nice things, but I cannot speak to that. My goal has just been to explore and figure out exactly what is going on. And it’s pretty positive overall. 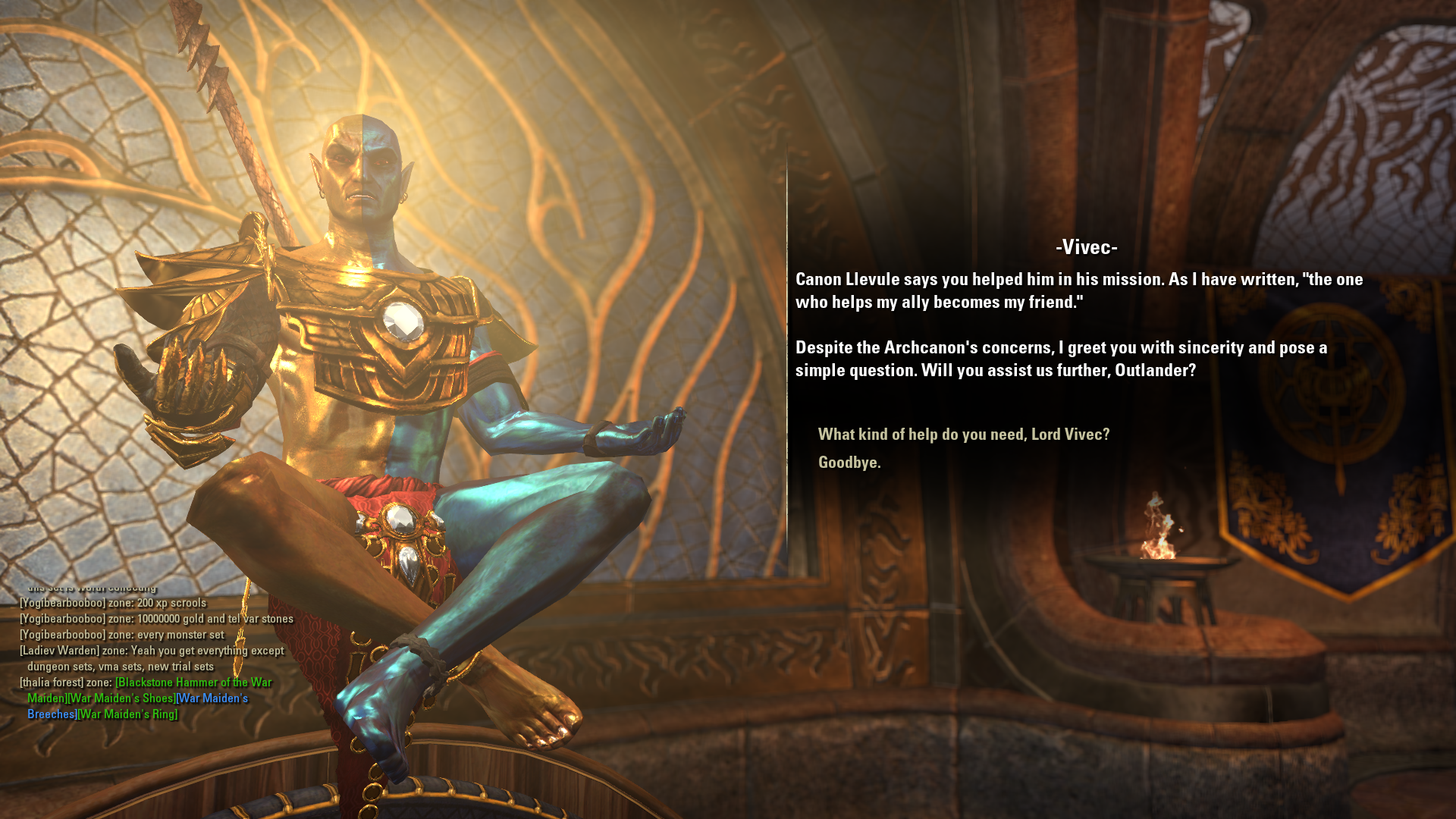 Bask in his glory.

2017 is apparently “The Year Jason Eats Crow,” and I’m totally fine with that. I’m not super familiar with Morrowind, but when I found out that it was coming, I took some time to really sit down with the lore and the game to try and see just how accurate this was going to be. Because I know that the hardcore players won’t be fooled if it’s not. It feels authentic. It feels like… ESO. Morrowind is what hardcore ES fans see when they put that Morrowind Disc in or turn on their PC with rose tinted glasses. They see this beautiful vision, a sprawling island. I of course missed things, because I did not do much in the way of PVP, but I do love that they added small-time 4v4v4 faction-based PVP. Vivec City does offer lots of crafting stations and will be a fantastic new hub. You have everything you could need on the Island.

And the best part? You don’t have to fulfill any prereqs to get there! You can just… go! Start a new character there, or wander there on your current one. Do the daily quests, get some great gear, explore, fight the wildlife, meddle in affairs that aren’t yours! I didn’t really find too many negatives, and I did go looking. Other than the slog of leveling, and the fairly high cost of teleporting [but I imagine that will be less stressful at higher levels]. ESO: Morrowind is the first expansion for the Elder Scrolls Online game, and they definitely came out swinging! As long as they keep producing fantastic content for the Island, I can see this being a huge success for them.