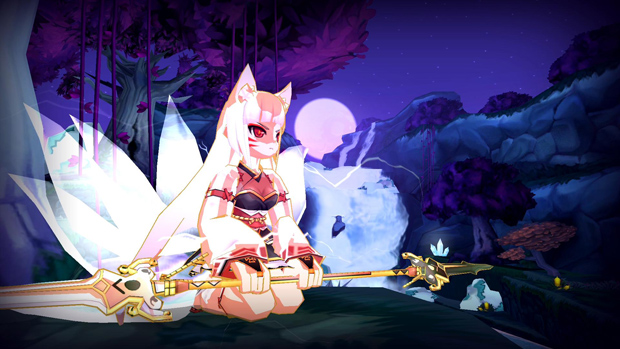 Ara Haan has spent every waking minute searching for a way to redeem her demon-possessed, disgraced brother. Obsessed with her goal, she’s overlooked the very power that has bolstered her immense strength: Eun, the Millennium Fox Spirit. Encased within the very hairpin that Ara keeps so close, Eun writhes inside an eternal prison. Ara’s ancestors confined the ancient spirit as a demon. Always striving to follow the right path, Ara finds the seal was made using the clandestine Haan family art of exorcism. The harrowing truth comes to bear… only a member of the Haan family can cast confinement upon the demons, and break that bond. The entire Haan family was annihilated by the demon army, led by her brother. Ara sets out to master the ominous art herself.

Relentless, Ara stopped at nothing to seek out the alchemist Echo, who became curious about the ancient fox spirit now sharing control of Ara’s body. During the alchemist’s experiments, she learned of a mystic apparatus that can project Eun’s memories. This allowed her to see the exact moment when Eun was captured in the hairpin. From this vision, she learned the secret exorcism technique that her ancestors performed to create the seal and how she might break it. Ara succeeded in cultivating Eun’s supernatural powers from the hairpin… and from within, an amalgamation of Ara’s martial prowess and a dark, ethereal ferocity grew, and in that moment, the Dark Fox was born. With her newly acquired skills, she became widely known as the Little Specter.

Unlock a Secret Skill: As Little Specter, Ara is dedicated to learning her ancestors’ Exorcism Arts. As a combo, players can combo 3 new, Job specific skills in succession in order to unlock the Secret Skill. Once executed successfully, Ara jumps and disappears, then quickly reappears above the enemy last struck by Darkness Sever before crashing down on the enemy, setting off a storm of specters damaging all foes in the area.

Ara Haan Level Boost Event!
For a limited time, you can boost one base-job Ara up to Level 35 instantly (one character per account only). Just bring Ara to the village or a resting area between fields. Wait for the message to pop up then click the Level Boost button. Once you’ve done this, you will also receive the Level Boost Cube thru the mail!

Ara’s power has grown immensely, but who is in control? The Dark Fox is only the first to cast this harrowing shadow across the land of Elrios. The beckoning howl of the Millennium Fox echoes across the underworld and shakes its denizens to the very core… Darkness is Coming!