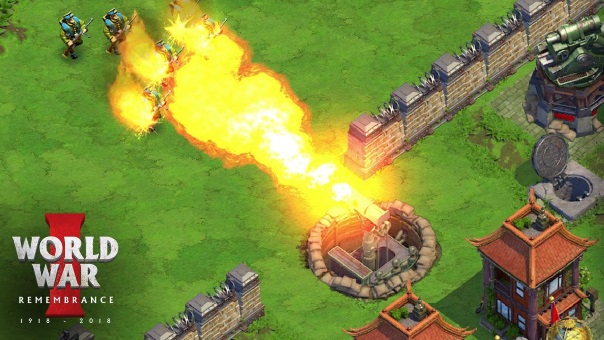 In remembrance of Armistice Day’s Centennial, Nexon and Big Huge Games commenced a series of historical in-game events in DomiNations to spotlight this. The DomiNations World War I Centennial General of Armies Event features the commander of the American Expeditionary Force, General Pershing, and the Supreme Allied Commander at the war’s end, Ferdinand Foch, as new Generals players can unlock. Players will also be able to deploy Big Bertha for long-range artillery, recruit Captain Rickenbacker, the ace pilot, and construct Whippet Tanks, the agile armored vehicles that changed the battlefield.

The limited time event, Thunder of Cannons, will offer players a chance to learn about the significant battles of World War I while earning powerful new technologies, such as the Livens Flame Projector, an experimental flamethrower used by the British to shoot fire at a great range. Newcomers to DomiNations as well as veterans will be able to explore, discover and craft artifacts that can be placed in the new World War Wing in the Museum. Each new craftable artifact from World War I placed in the museum will award a player’s civilization with unique economic or military benefits.

“From the onset, DomiNations has always been a game about honoring world history and the pivotal heroes, troops, technologies and events that changed the course of mankind,” said Tim Train, CEO of Big Huge Games. “Through the DomiNations World War I Armistice Day Centennial Event, we’re looking to put a unique spotlight on some of the iconic historical moments, great generals and decisive tactics from the ‘War to End All Wars.’”