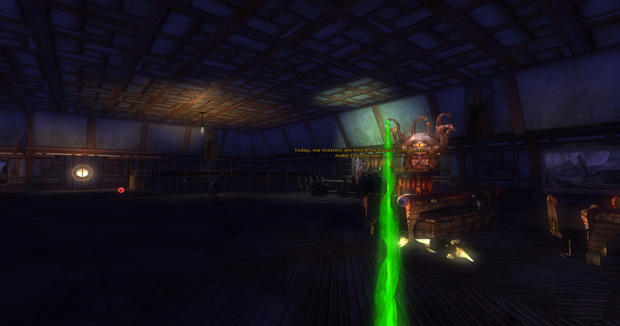 With the release of U24’s Heart of Madness, Dungeons and Dragons Online flings open the gates to Xoriat, the Realm of Madness, home of the Daelkyr, the Lords of Madness. It prominently features, as you may have already begun to suspect, madness. Lunacy, bedlam, dementia… it’s all there. That’s not all that’s there, though, as the update ships with a selection of weighty game updates aimed both at fans of specific classes and players of all persuasions. 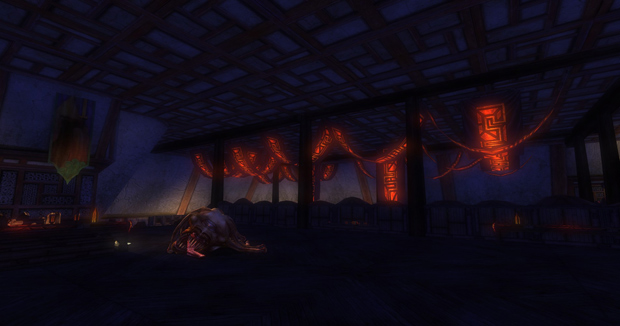 Well… okay, it’s really only one class that’s getting an in-depth facelift, but it’s a class that needs it. It needs the love because it is the undisputed (don’t dispute it, I’ll get angry. You wouldn’t like me when I’m angry.) king of all classes: the barbarian. The barbarian, for those who don’t know, is a very difficult class to get right in any game. Whether a MMORPG or a single player RPG, the challenge in designing a good barbarian is simply this: barbarians overpower their enemies. That’s not “overpower” in the gaming sense of “this is poorly balanced and/or I just got beaten by this class, please nerf,” it’s about literally overpowering the opposition. Barbarians charge, crush, slam and roar their way to victory, refusing to be encumbered by things like shields, spells, complex tactics, table manners, or subtlety. As a result, they’re very difficult to balance. Tilt them too far in one direction, they become way too powerful and, while that’s great fun for barbarian players, it’s not so fun for everyone else. Nobody who plays a squishy rogue, finger-wiggling wizard or shiny paladin wants to see the loud, coarse and possibly stupid guy with a big axe and questionable hygiene make them look bad. So, most games, over the course of their lifespans, tilt toward the other direction: the barbarian class falls behind the rest of the pack, wheezing and grunting as he tries to keep up.

The fine folks at Turbine have acknowledged this problem and, more than simply address it, they’re tackling it to the ground and slapping on a submission hold. Expect sweeping buffs to damage and survivability in every tree, not simply through boosted numbers but through improved ability design, utility and synergy. Long-time barbarian enthusiasts will find themselves at the helm of what may very well feel like a new class. A better, more responsive class. A class worthy of using to crush one’s enemies. 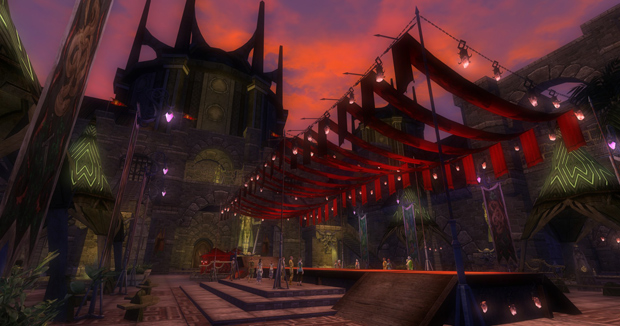 For those players whose interests turn to pursuits other than seeing their enemies driven before them and hearing the lamentations of their women (seriously, though, it -is- what’s best in life), there’s more. U24 introduces the next step in DDO’s equipment appearance customization system: cosmetic weapons. That might sound like some kind of bastard sword/hair curler hybrid abomination, but it’s actually pretty cool. Through a simple drag-and-drop interface, players can now completely customize the looks of their weapons. And by “completely” I mean -completely-, as this process includes things like weapon auras. That’s not to say you’re restricted to predetermined choices, either. Let’s say, for example, you find a +5 Holy Avenger. I have no idea if that sword is actually in the game, but it’s the most obvious D&D example I can think of. I’m an old nerd, shut up. The point here is that you could, if you so wished, make that sword look like whatever blade you want, and then, if you so desired, you could replace its holy appearance with, say, an unholy appearance. Or a fiery appearance. Or an acidic appearance. Or any other weapon enchantment effect in the game, really. It’s an almost startling amount of leeway. Other games (almost every other game, for example) could take a lesson from this. 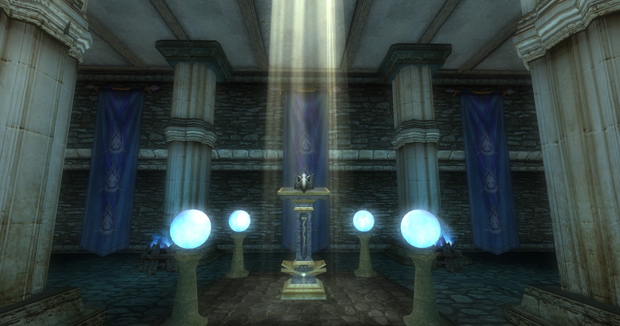 If that’s still not enough, combat itself is getting a new look with the introduction of monster champions. Basically, these are special bad guys that appear along with normal bad guys. They can appear in any dungeon on Hard or Elite difficulty. They’re marked with a golden crown icon, and they’ll be a bit stronger than the standard bad guys. They’ll also have some kind of unique ability or another, designed to make the player adapt their strategy a bit. A resistance to a certain weapon or elemental type, for example. They’re not intended to stop a player dead in their tracks, but they should provide a nice wake-up call for overly complacent dungeon jockeys.

If anything actually does stop a player dead in their tracks, it’s going to be the rampant lunacy that is the Heart of Madness itself. Out of respect for the story, I’ll keep spoilers and hard details sparse, but this thing gets all kinds of crazy. I mean that, too. One moment, it’s a Lewis Carroll kind of surreal-but-amusing, as otherworldly entities bicker and squabble almost harmlessly. Another moment, the scenery comes to life around you and attacks with intent to kill, exhibiting a darker kind of surrealism that would make Salvador Dali blush. If that’s not enough, try navigating a three-dimensional maze of gruesomely lethal traps. A young Clive Barker would be proud.

Don’t even get me started on the part where a certain mindflayer shows up and the whole thing turns into an episode of The Twilight Zone as written by Stephen King. 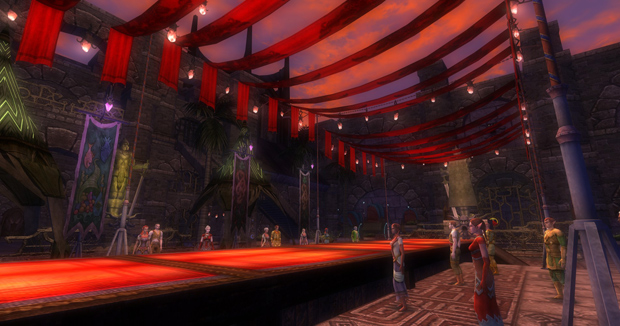 To summarize: the plane of Xoriat draws close to Eberron. You, the player, are going to try to stem the resulting tide of madness, but you’ll soon have your hands full with more insanity than you know what to do with. Barbarians are going to rock a lot harder, and what better way to break through dark mind-flaying oblivion than with a brute that’s too hard-headed to be reasoned with? You’ll be able to make your weapons look however you want, and then you’ll get to dazzle a bunch of new champion monsters with them. In the four new dungeons, preferably. Three of which are Madness-themed, the other one’s about taking down a dragon cult fortress. Did I mention that you can patiently infiltrate it or take it all down in one big smash and grab? I’m partial to the smash and grab, personally, but you “delicate work” types are people, too. I guess. Turbine certainly seems to think so. Good for you. Good for them, really. Player choice is a painfully rare commodity in MMORPGs, and the team behind Dungeons and Dragons Online clearly agrees.

Here’s to you, team.