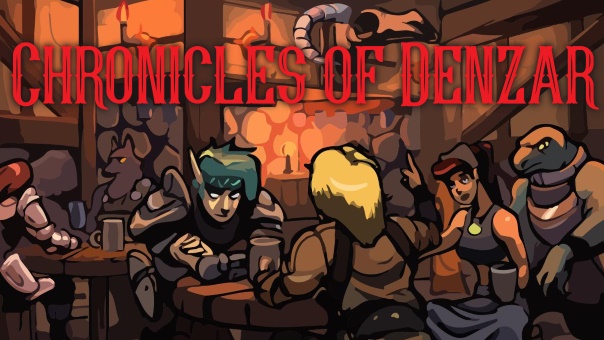 In between the popularity of MUDs in the late 1990’s, and the rise of MMO’s in the early 2000’s, a fairly large number of graphical MUDs began to emerge. These were typically 2D, tile based games where you had a simple “paper doll” style avatar that you guided through worlds on adventures. Most were run by a single individual, or at most a small group of friends. Typically they were free, but a few people tried to make a few bucks on them by selling in game currency, or, in the worst cases, the most powerful weapons in the game.

As MMORPGs such as Everquest and later World of Warcraft grew in popularity, these graphical MUDs (or GMUDs) faded mostly into obscurity. A few have clung on for dear life and are still in existence in some form or another, and there’s even the odd new GMUD appearing on the web. One of these, Chronicles of Denzar, I recently took some time to play, and thought I’d share my thoughts on it with you fine MMOHuts readers. 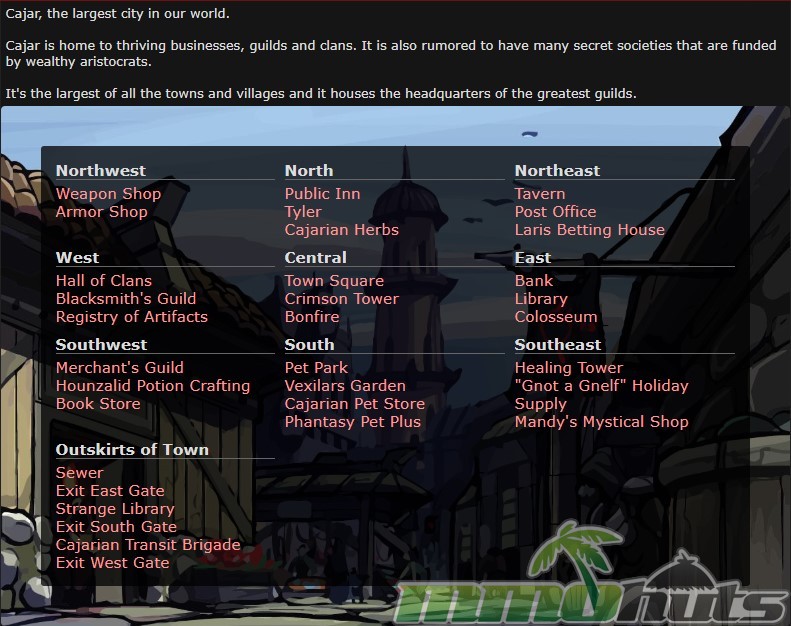 This is the central hub of the game, the town of Cajar. Here is where you can find the shops and trainers of the game, as well as a few other specialized locations.

Chronicles of Denzar is, in its current state, browser based only. It has the perfect sort of format for a mobile game though, and the game’s dev staff did express an interest when asked about porting to mobile devices, suggesting, “If we found the right app developer willing to work for a profit share, that would be ideal.” This sort of mentality really just fits in with the overall method by which the game functions. A lot of the material is crowdsourced by the playerbase, who eagerly participate in a project that they’re passionate about.

You begin the game by choosing your gender, race, and name. Upon reaching level 10, you achieve your first class, and at level 25 you’ll be able to promote to a more advanced version of that class, and again at 50 and 75. Finally, when you reach level 100 (this requires a rebirth, more on that in a bit), you’ll be able to choose a between two capstone classes, each further specializing in an aspect of the base class. For example, I began as a Tracker at level 10, which promotes to Scout, Strider, and Ranger. At level 100, I would be offered the choice between Sharpshooter, or Assassin. 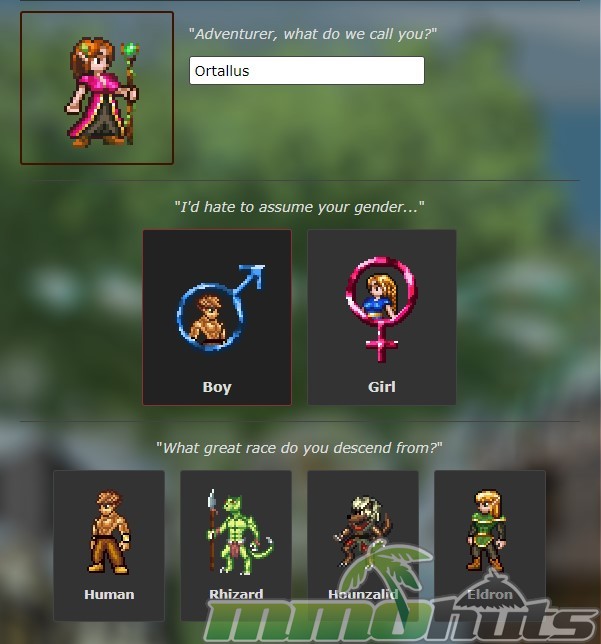 It may not feel like you have a lot of choice, but as you grow, so do your options.

Each class has an active ability and a passive ability. As you advance in tiers you retain all abilities from previous classes. Then, when you hit the level cap, you’re able to undergo a process called rebirthing. Rebirthing can be done up to six times total, and doing so comes with some inherent benefits. First off, you can choose any passive ability from first four tiers to keep. So as a tracker line, I could keep the passive from either tracker, scout, strider, or ranger. Rebirthing resets you to a level 1 adventurer, though, and at level 10 you can pick any of the four classes. So you can be a mage with tracker passives, if you so chose.

Rebirthing also comes with a variety of other benefits. Experience and crowne (the game’s currency) gains are increased, and so is the chance of encountering elite or boss monsters (which offer significantly more experience and better loot). Your inventory cap is increased, as is the stat cap, and most importantly the level cap. You see, before your first rebirth, the level cap is 99. Each time you perform a rebirth, it increases by 25, allowing you access to those capstone classes for the first time only after you have performed at least one rebirth.

The game has far more going for it than just leveling up, however, and rebirthing has additional benefits, as well. Really, the list is too long to enumerate, and you’re best off using the game’s extensive help file system if you want to know more. In fact, I suggest you become intimately familiar with the help system, as the game is pretty darn complicated considering its GMUD nature, and you’ll save yourself a fair bit of woe by trying to search keywords. 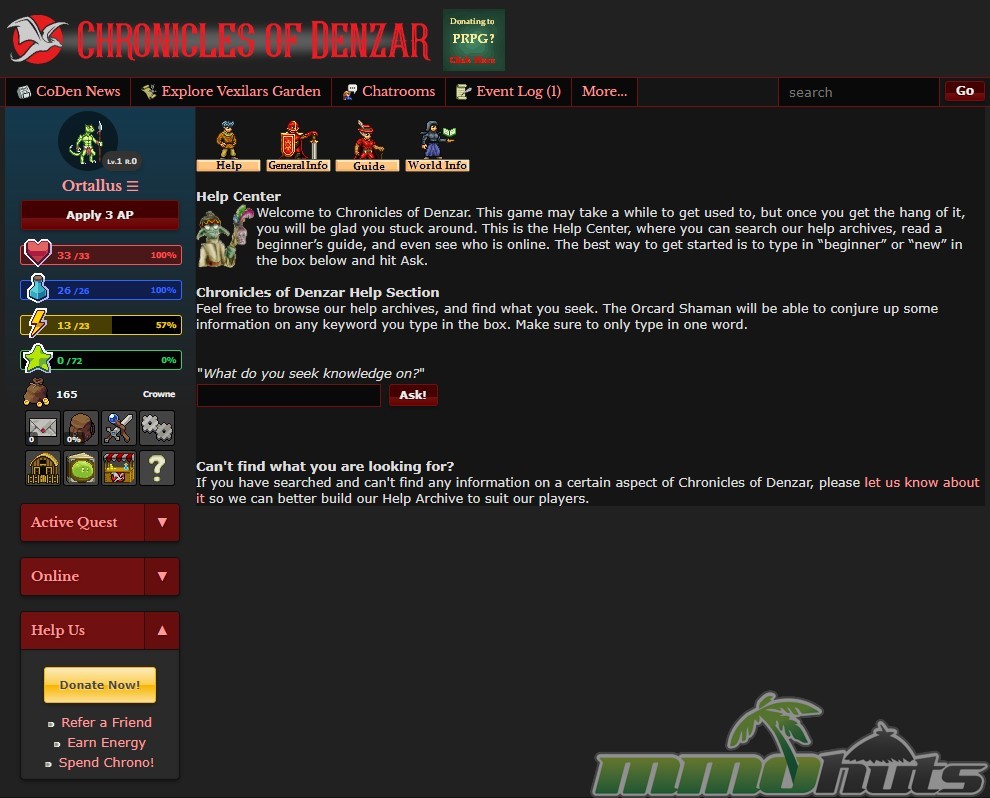 A very useful interactive help bank which links to topics you search.

Chronicles of Denzar also has a surprisingly robust gathering and crafting system. To my knowledge, you can currently mine and smith, as well as creating potions. Soon, in fact, there will be a new alchemy skill, and Chronicles of Denzar are planning on adding over 100 item recipes for that skill. There’s also fishing, cooking, and even digging for buried treasure.

Pets are another fairly big part of the game, it seems. You can “befriend” pretty much any enemy in the game by using a binding stone to make it your pet. This does include humanoids and sentient creatures. In order to do this, however, you must first acquire an entry for the creature in your bestiary by defeating it in battle. Sometimes it takes more than one defeat to gain a point in the bestiary, and the more knowledge-levels you have of the creature, which goes up to 10, the more likely you will be successful in your attempt to tame it. Each pet has its own stats, and can level up with you. When you rebirth, however, the pet’s level and stats will be scaled down to your level.

I think something that really stands out with Chronicles of Denzar is its community. It’s a very casual and laid back game, and the chat reflects that. Folks are friendly and helpful, and the game does have quite a surprisingly large and active playerbase. It’s entirely donation run, as well. They could easily have fit banners around their page, but chose not to, which is commendable in the extreme. There are rewards for donating, but nothing that can’t otherwise be obtained through gameplay, which means it avoids that pay-to-win trap that so many games fall into. Despite that, its fans have contributed a considerable amount to the game, which has earned many names a spot on the “wall of fame”. 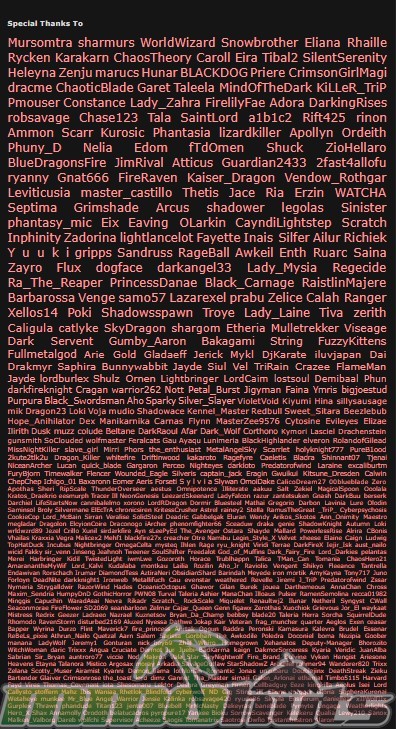 Folks who have donated to Chronicles of Denzar.

Chronicles of Denzar is a game with a lot of heart. The developers work closely with the community to develop a game that people want to play. The chat is actually called “The Tavern”, and it almost has that feel, except without the weird drunk in the corner trying to grope all the barmaids. Since it runs in your browser, the requirements are next to nothing, and several people mentioned playing with the browser on their phone, meaning you can take it with you pretty much anywhere you go. I’d say that it’s a pretty decent little time waster with a very positive community, and plenty of intricacy to keep even the most ardent theory-crafter busy.