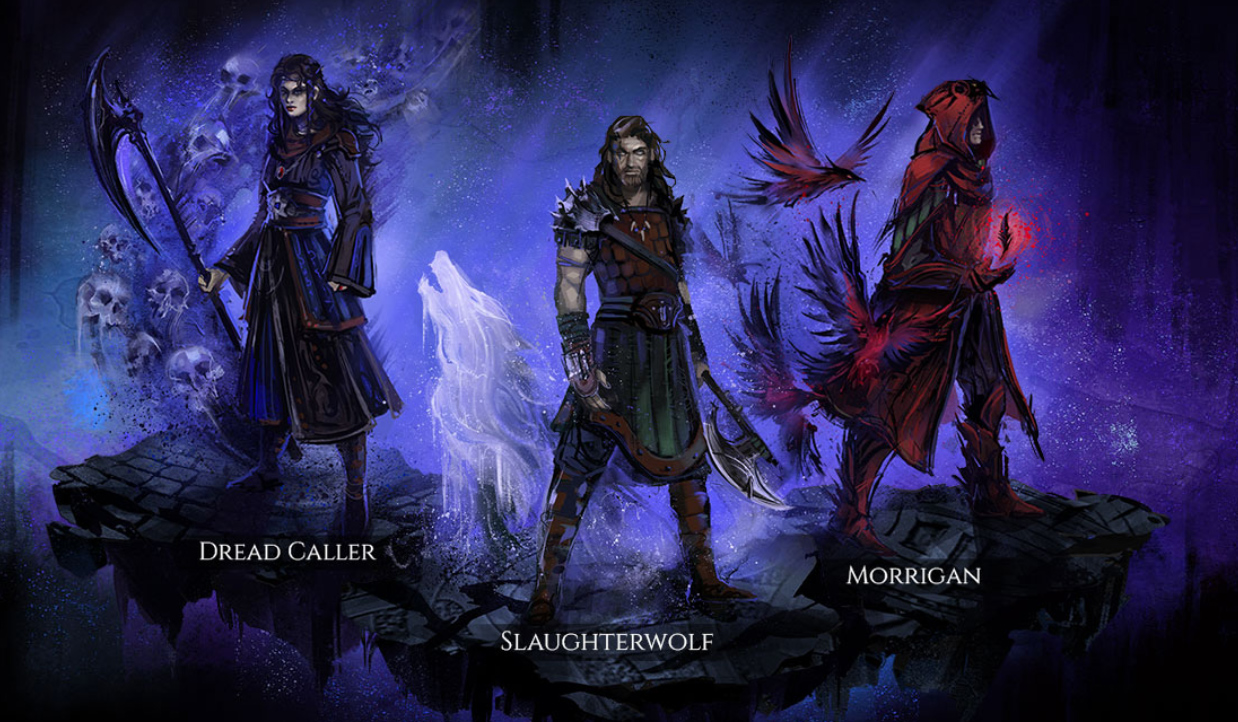 The eighth archetype reveal has just concluded from City State Entertainment for upcoming Tri-Realm PvP MMORPG, Camelot Unchained. And while official pets as most MMORPG users know them will not be in the game, this week we got a look at their substitute class option, the Spirit Mages.

Spirit Mages essentially function akin to an MMORPG pet class, with the exception that their pets are more of the destroyable projectile classification than active AI or otherwise controlled NPCs. This reduces the load on the server and on player machines by one, only having pets active during combat scenarios, and two, limiting pet visuals to more of effects in nature rather than having to render armor, and much of the textures a full NPC character would require.

This archetype also proves to be one of the most diverse among the three realms. Let’s break down the details.

Dread Callers bring purgatory with the hope of redemption. Their power draws from tainted souls of those in the realm that have lost their way. While not so much the case with its rivals within the archetype, the Dread Caller’s playstyle is absorbed almost entirely in the function of their summoned spirit. Their role is defined by their decision to summon more of a fighter or mage type spirit. Their most potent attacks will then derive from this spirit, and if a Dread Caller is trusting in their allies, then can even mind transfer their existence into their spirit, taking direct control while leaving themselves motionless.

There’s only two things in life Slaughterwolves enjoy. Wolves. And slaughtering. Thus their class is ready to oblige. The goal of a Slaughterwolf is to build up a pack of wolves for maximum efficiency. Wolves come in a variety of elements with their own strengths and weaknesses (frost and fire the samples given today), but when commanding your pack, wolves of the same element stick together. As you imagine each command comes at a cost, this gives you the most efficiency when managing multiple wolves of the same element!

Of course superior numbers comes with disadvantages. The wolves decay as soon as they’re summoned and can only regain their fighting strength through the consumption of corpses. Only one wolf may feed on a corpse at a time, meaning a large pack is going to require constant enemy deaths to stay strong for long. Plus, you’ll need to keep up with your pack, as wolves that stray too far from their master will go rogue and no longer obey your direct commands. This introduces an interesting synergy with other Slaughterwolves as if they command a stronger wolf of the same element, they can absorb stray wolves from another pack to add to their strength without wasting the cost to summon the new wolf.

In the wild if you come across natural wolves, you can even absorb their strength to allow your pack to reach full potential. A veteran slaughterwolf may even obtain the control to utilize two different element of wolves to unleash pincer techniques and the like. This class sounds quite skill intensive to play, but very rewarding to RTS masters looking for a challenge.

The Morrigan is the master of three as one. By this I mean their wolf, raven, and bull spirits can transition between forms should their master invest the power to do so. This combined with their ability to create portals in the veil to fast teleport their spirits makes the Morrigan the trickiest, and most unpredictable of the Spirit Mages.

This class compensates for the more AoE control the Druid offered to the TDD mage archetype. They offer more mage-like abilities with long range projectile summons meant to deal vast damage, swarming foes in an ugly torrent of spirits that will be harder to focus fire down like the other spirit mage archetypes. Knowing your enemy and mastering your spirit swapping will be key to take advantage of each targeted foe’s weakness to maximize your dps.

Like many other members of the TDD, the Morrigan is specialized for fighting in the depths of night. They suffer regeneration issues during daylight and gain boons to it while shrouded in darkness. A properly played Morrigan will survey the battlefield to choose their initiation to combat wisely. With the right spell components and creatures, one can kill two stones with one bird, so to speak. Their longer range may also be used for confusion as enemies might not immediately know where the spectral entities are coming from, particularly if one uses your veil portals properly to disguise your projectile routes. Should a Morrigan get on an early killing spree, their power only grows, snowballing into a true terror of the night for hapless ambushed foes.

The spirit mages are an interesting twist in the post-launch class roster. Like other magic, their creatures are expected to experience strange and wonderful impacts from the AIR system. Some powerful spirits will be targetable as well, making this a much more solo friendly mage class compared to the more generic mages out there. At the same time its a class that needs a clear head as you typically will have to focus your attention on yourself and your pets simultaneously to maintain your effectiveness. A lot of questions remain surrounding this classes’ implications, but as it was a stretch goal, CityState Games has time to balance and test their mechanics at launch before finalizing plans to implement this unique take on pet classes.

For the full reveal details, check out today’s archetype page.