It’s been over a week now since backers like myself gained access into the official alpha testing of Camelot Unchained, Mark Jacobs ambitious Kickstarted sandbox MMORPG attempting to bring back true PvP conflict, realm pride, and decisions that matter to the stagnant fantasy genre. But now with alpha access, real questions of game design and development direction has begun. I’m pleased to have an opportunity to connect to MJ to get a feel for where the game is likely to go from here as well as how the founders have influenced development decisions. 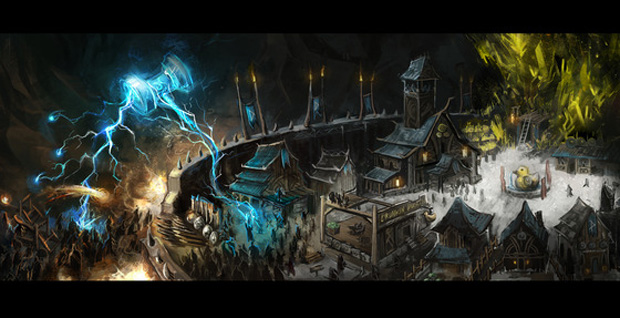 Dizzy: Mark it’s been roughly two years since last we spoke about the pending Kickstarter for Camelot Unchained. Did you ever have any idea this project would receive the reception it has so far?

Mark: Using one of the expressions that people around the office hate, yes and no. Yes, I thought a lot of people would be interested in this type of game. OTOH, no, I didn’t expect that our Backer community would turn out to be as awesome as it has. Whether it was during the Kickstarter or afterward, these guys and gals have shown generosity not only through their financial support but also of spirit. They are in IT chat all day and night, our forums have been remarkably flame war-free, and the way these folks have followed us during our marathon live streaming sessions has been incredible.

Dizzy: My apologies if I jump around a bit over the next few questions as there’s so many aspects of Camelot Unchained that interest me as both a gamer and gaming press. The sandbox elements are finally shaping up through the fast evolving CUBE (Camelot Unchained Building Environment) system. Can you explain to our audience what this program is and how you intend to eventually incorporate it into gameplay?

Mark: CUBE is meant to be a way for our Backers not only to have fun 24×7 (only testing an MMORPG’s features when servers are up is so 1999) by building structures, but also to help break and improve our game while doing so. They can build anything that you would expect from a “building blocks” game, and they can share their CUBE files with other players to work on as well. And, thanks to the magical coding abilities of Andrew Meggs, we can even build round structures. 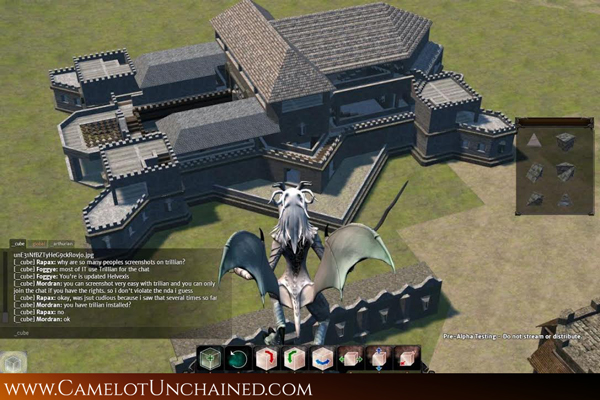 Dizzy: Do you envision CUBE being done in a real-time setting or is the plan to have players develop blueprints outside of game that they can then import and build automatically given access to the proper materials and location?

Mark: Some of CUBE will be available in the main game. Ultimately, it will allow players to not only practice their skills, but also let each of them create his or her own home outside the game, safe from the attacks of other players. In addition, if there is enough demand for it, we could easily give players different maps so they could deck out their own worlds, kingdoms, etc. in a different geographic setting. It really depends on our Backers and their interest in setting up their own small Realms. We will definitely use CUBE for blueprinting. We haven’t even really begun to explore what we can do with it long-term. We think that will be a fun project and maybe even worthy of a Stretch Goal for a post-launch Extender Pack. 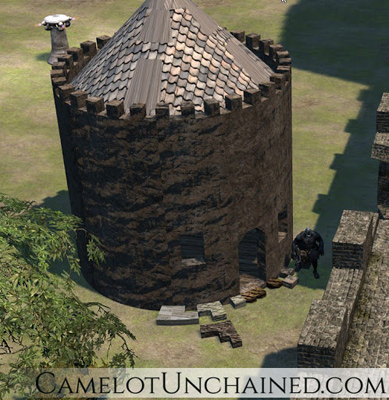 Dizzy: You’ve been teasing the updated design document for crafters for weeks now. Is there any tidbits you can offer to hold us crafting players over?

Mark: Well, the teasing recently ended for our alpha Backers as I uploaded it to our forums late on Friday. As to tidbits, sure:

1) 100% pure, non-watered down, crafter class. Our crafters can choose to go into RvR, but they can also opt to stay nice and safe, spending all their time crafting. They never have to engage in combat unless they decide to do so.

2) Choices matter, especially in crafting! Our in-depth, materials-based system puts the crafter in charge of the item itself. You can make alloys of different materials.

3) Crafting is meant to be a full-time occupation. We will also have “popcorn crafting”. This will allow combatants to craft, but not in the same way or to the same depth.

4) Our economy is almost 100% player-driven. We need to have some basic items for new players, but after that, you are on your own.

Dizzy: Sweet I’ll have to check that document out when I get a chance! Most of my staff is jealous that I’ve had hands-on time with the skill crafting system. However, I’m curious what direction you want to go with it. Considering a skill will eventually be built out of 5+ components, would you rather skill formulas be hidden from other players, or easily viewed by others (allied or enemy)?

Mark: We hope you are having fun with it! It is one of the systems that we hope will set this game apart. Enemy players will not be able to know exactly what items went into an ability, but you can always choose to share this information with your Realm. 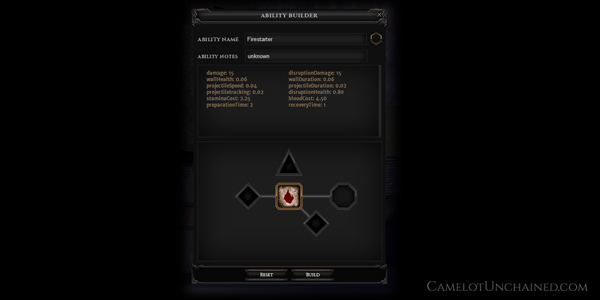 Dizzy: A personal curiosity but can you share your vision for the Founders receiving their own tavern? Have you kicked around any design styles? What do you imagine will be the draw for players to hang out in them?

Mark: The taverns are meant to be a great way for players to roleplay while still playing the game. They will be able to sell items made by other players. They will be able to offer a special line of food and drink, and we hope that one day, we’ll be able to add some entertainment as well. We also expect that the tavern owners will play an important role in ways we haven’t yet discussed outside the office. 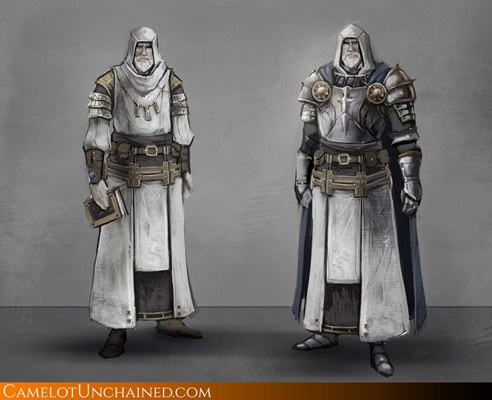 Dizzy: Outside of keep conquest and land migration, do you plan to implement any design mechanics that might offer a greater sense of urgency for one or both factions to capture a certain area? Perhaps powerful group and expensive group spells with long cast times that would need to be protected by their faction?

Mark: Normally, I’d say that would be telling, but other than mines, stabilized land, structures and access to The Depths, yes, we want to have many reasons for players to capture certain areas. From the beginning of the Kickstarter, one of our main goals was to discourage zerg-play from being the best way for players to succeed. We know we can’t eliminate it, nor should we since we do want large-scale battles, but we do want to make sure that the players have other, better options than just roving bands of locusts that never come in contact. And one of the best ways to do this is to make sure they have lots to do, not just by making design decisions that have “Anti Zerg Stuff” stamped on them. 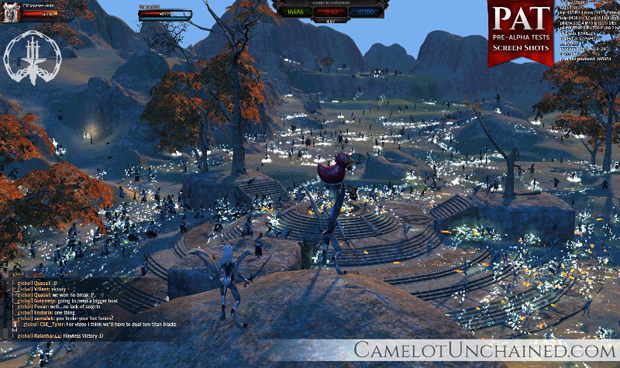 Dizzy: On the opposite end, do you envision needing hard features in place that limit how often a region can be invaded in a day to provide a safe period for the ruling faction to build sufficient defenses? Or will it be managed in less official means, such as the cost of a failed assault making a full territory conquest attempt a daunting affair?

Mark: Yes. We were actually talking about this just yesterday (we’ve talked about it a lot). Obviously, a number of games have tried similar things to what we are doing. We also know that if we just have a totally wide open world, the players who are on at advantageous times, better organized, etc. can do disproportionate amounts of damage. We need to set up a system for conquest that is not totally controlled by us so it feels like it is on rails, and we also have to put in safeguards so people just don’t quit after having their homes burned down several times. IMO, it is one of the greatest challenges for a game like this. 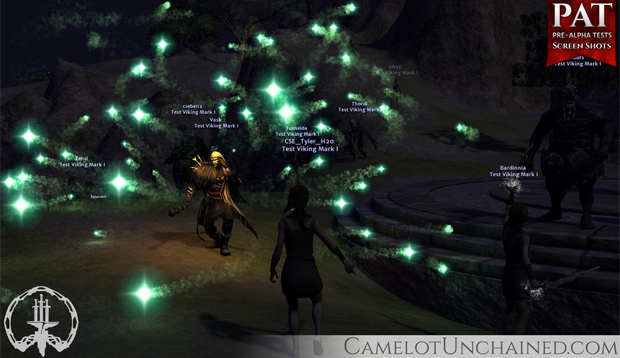 Dizzy: Something not brought up often is lore. You’re clearly taking lore very seriously with lore documents even being listed as part of your pre-alpha test checklists. Yet without PvE and questing, the typical system of imparting lore to the players in-game is missing. Do you have other plans for introducing lore to players apart from reading documents outside of game?

Mark: Yes. We want lore to be a part of this game, but not as a driving force behind PvE quests. The lore of The Depths™ is very important as players explore it. The lore of the races will give you clues and information about them. And, we hope, the lore of your chosen Realm will make you even more eager to get out on to the battlefield and slay all those nasty and misguided followers of the “other brothers” so you can help your own brother to save the world.

Dizzy: After meeting Jenesee and Guinness at a recent community meet-up I couldn’t believe on what friendly terms backers are that didn’t even know each other prior to the Kickstarter. What is it about Camelot Unchained that seems to bring people so close, even before the full game is available?

Mark: It starts with, quite frankly, me. I have tried to set a tone and direction for how our studio is going to treat our Backers as well as other games and companies. I promised anybody who would listen to me during the Kickstarter that once we funded, things were not going to change for the worse in terms of communication and openness with them. Fortunately, my co-founder and friend Andrew Meggs not only shares this commitment, but is also urging us to get even closer to our Backers by streaming more often.

Now, with the two of us setting this tone, the rest of the studio has happily jumped in. So, you can find us on our forums and Reddit as well as popping up elsewhere. And we are always respectful, honest and well, human. We don’t act like rock stars; we treat our Backers with respect on our forums, and are open about every aspect of our development process. All of that plus we are fortunate to have a community that is not based on constant e-peen waving. OTOH, we could just be lucky, but I don’t think so. J 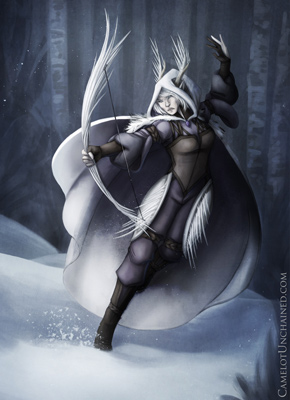 Dizzy: Let’s close out the interview on a positive note, more funding! For the next stretch goal, “Programmers, Where art Thou Programmers?” we were curious how exactly hiring these folks will help development. The team is already doing amazing without, but I imagine you have a theory of how to make things even better. Perhaps even involving Andrew getting some sleep between now and 2016?

Mark: If we can get two more senior engineers here, we will not only be able to speed up development, but let Andrew spend more time coding and less on being the only true senior engineer. This would make a huge difference in both his sleep and the amount of code that would emerge from his awfully skilled brain.

Dizzy: Thanks for taking time out of your busy schedule (I hear no one works quite the number of hours as you at CSE). We look forward to seeing new builder backers, huff, puff, and blow yet another goal down.

Mark: Thanks for taking the time to interview me too, Dizzy! In terms of the number of hours I work, yeah, I’m really bad that way. It was the same back at A.U.S.I, Mythic and even EA. Nobody can/could ever question my devotion to my studio/company. My sanity at times, yes, but not my devotion or work ethic. J
Catch you in alpha! Or, given my choice of play, burn ya with a fireball. 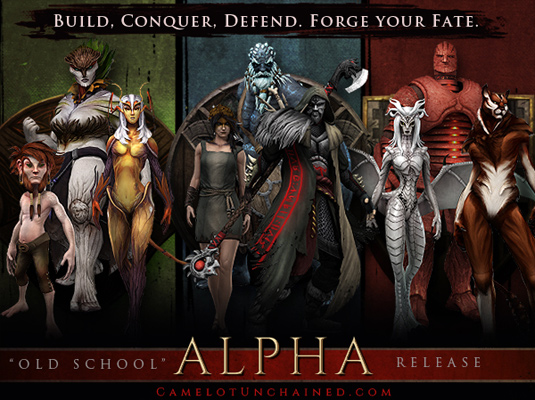 Dizzy: If you want to join us in the fun, it’s not too late. Check out the Camelot Unchained builders packs for more details.