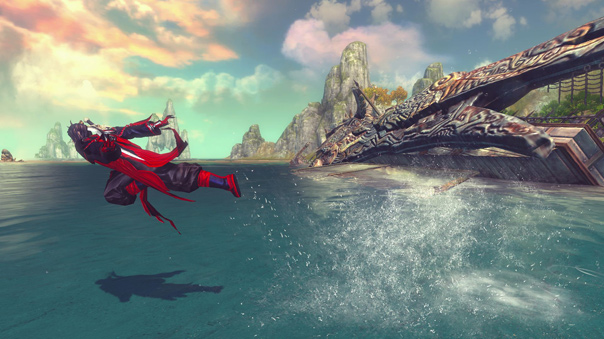 Oh baby, OH BABY! We did it. We got into NCSoft’s private Concourse booth. That PR people were guarding the door of at all times during the show. Honestly we thought they were there to talk about WildStar’s free to play conversion, as the core booth was set-up with banners for Wildstar when we managed to poke our heads in for half a second before hitting the bouncer. Yet with perseverance, pestering NCSoft four times during the show, and even once at the Daybreak Games after party, we at last locked in the final demo at the show.

But when we asked to confirm our WildStar appointment, they merely smiled and said they were not showing WildStar on Thursday. Our minds raced imagining every possibility from Lineage: Eternal news, to a demo of the Aion: Upheaval expansion. But of course our hopes were on getting hands-on with Blade & Soul, and some juicy news to boot. Considering the title, you should know luck was on our side, as James texted me to flat out run from west hall to make the meeting. Even with it being 4pm on Thursday, you wouldn’t know it by my top speed hitting the central hallway!

Before I share my experience, I have to point out the key reveals for Blade & Soul’s western business model and content schedule. This news should reveal some anxiety for those hardcore fans that have been following the Korean and Chinese editions of the game.

The game stands by its decision for free to play, but is set to do so in the fairest system possible. Like Aion, Lineage 2, and soon WildStar, Blade & Soul will adopt the NCoin currency for their cash shop currency. This can be used to buy a variety of items ranging from convenience items, to cosmetic clothing, to repair tools, food, and even costumes for your summoner’s pet! 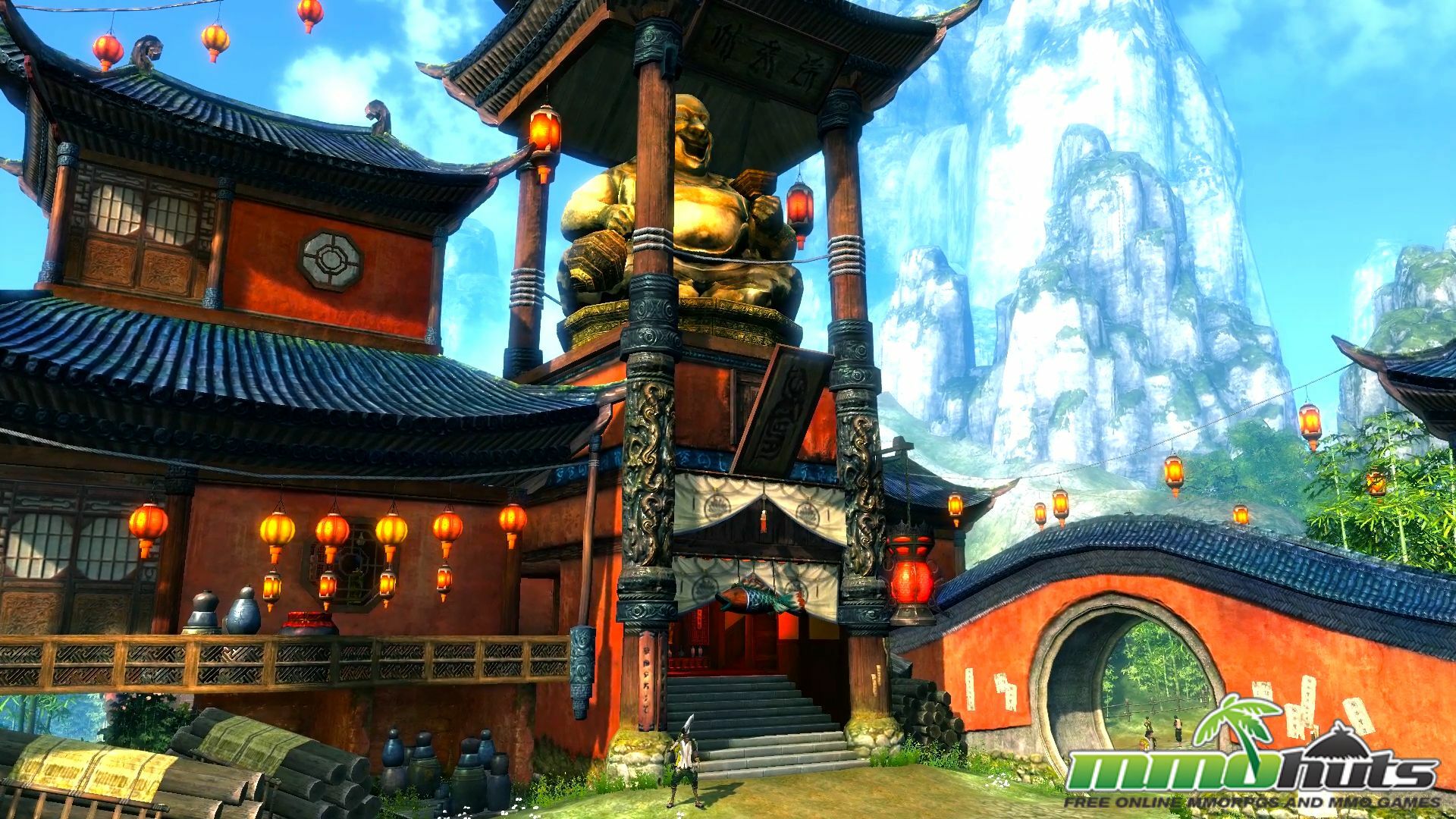 All I do is win. I'm paying to style and profile.

This coincides with a membership system reminiscent of Star Wars: The Old Republic membership system. As players maintain their membership, they over time can progress through four tiers of quality of life benefits including a special windwalk animation (unique to each class). As you progress through the tiers, your gold and xp boosts grow by 10%/15%/20%/30%. Unlike other version of the games, this membership system will not provide damage percentage boosts though. Also spending NCoin speeds up your membership tier progression, but active players that spend tons of the free currency can speed up their tier growth just as well.

Its worth noting that the free currency will be able to purchase roughly 95% of items NCoin can get you. There will be some rare exceptions, primarily for the shiniest most wanted costume sets, but nothing impacting actual character stats or skills. Of course with the rather long lead time in development since this game first hit Korea, there’s enough costumes built out now that free players will be able to play dress-up with the best of them.

One final note on the business model is that a pre-order aka Founders Pack program is coming. Anyone following the MMO industry in the past two years could have seen this coming. Details on how pricey or powerful these packs will be are still pending. What we do know is there’s going to be three tiers of packs, and all three offer you closed beta access. No more slacking off at work or racing strangers on your smart phone to claim a beta key, if you’re willing to pay for even the cheapest pack that is. Packs are set to go on sale this summer, with closed beta as soon as the fall, so we won’t have to wait long to know for sure.

As you might expect, Blade & Soul is withholding some of its most recent Korean updates back at western launch. This is due to a combination of needing more time to localize the game into English, German, and French, as well as limiting the more hardcore gamers from hyper grinding through all content at once. Essentially they’re hoping players will stop and smell the roses, since only the first three acts of story are available at launch.

Also of note is that not all classes in the Korean version will be available at launch. Though a quick glance at the westernized website hints that all four races (Gon, Lyn, Jin, and Yun) will be there, with six playable classes between them as listed on the official site (Destroyer, Kung Fu Master, Summoner, Force Master, Blade Master, Assassin). As previously hinted, cutscenes will be fully voiced in their localized language. Thus far this has been a mix of epic voiced moments of bad assery, to bad 70s/80s kung fu cheese dubs. Only time will tell if the final product will consist of either type of cutscene, or a mixture of the two.

Much to our joy, the hidden booth inside a booth had not one, but two laptops set-up for James and I to play co-op on. James jumped in as a male Jin Assassin, while I tested out the Yun Force Master, Blade & Soul’s concept of mixing an elemental mage with a Chi Psychic. Though after spinning a pre-made fox Yun in circles to admire his reactive tail physics, I had the sudden urge to build my own Yun out from scratch. My vision of awesomeness was cut short though as NCSoft’s rep assured me that the character creation on the demo would in no way reflect the final version. That could mean a lot of things! All speculation for now so I’m going to move onto gameplay.

The first half minute in-game left me breathless. I just spun around in circles looking up in awe at the massive vertical design of the waterfall covered cliff-side emptying into the massive frog pond I had logged into. Firefall is honestly the only other MMO I had experienced that level of scale in without losing out on overall image quality. After acclimating to my new surroundings, I did what any MMO player should do, and tried to kill the first thing that moved.

Combat in Blade & Soul is fast! I don’t want to say its quite Dragon Nest fast, but certainly its on par with WildStar. Abilities had real impact, and CC skills reflected their CC in glamorous visuals that made me sad knowing most MMOs still rely on simple icons. Seeing a giant frog encased in solid ice to represent they are immobile is far more satisfying. Even more satisfying though was force choking a foe into the air, before sending them flying as my personal projectile of generating further aggro. 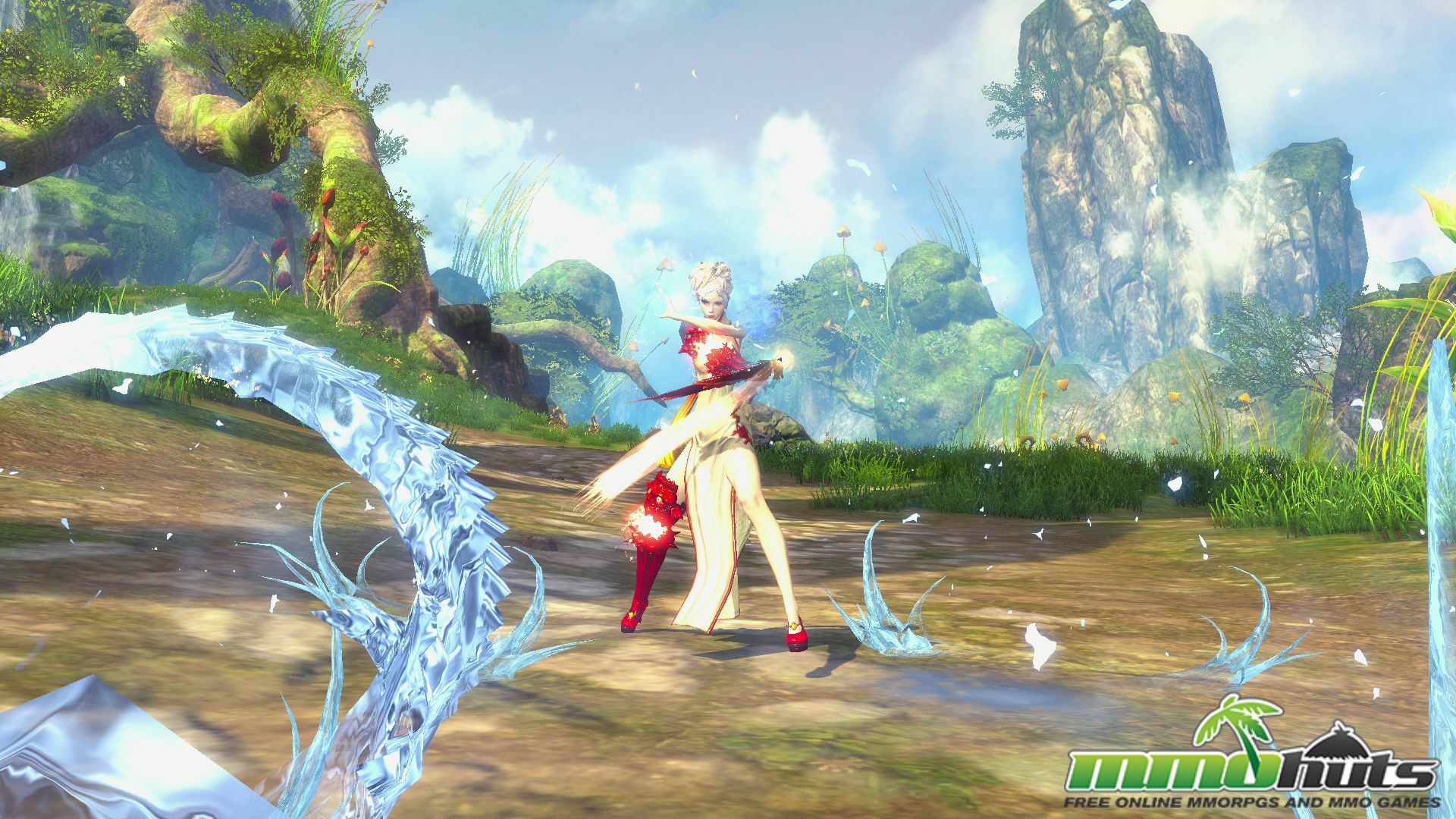 First-person camera perspective lets you appreciate the CC Hell of a Force Master.

The skill system feels like a combination of Final Fantasy XIV’s skill combo build up, with Guild Wars 2’s reactive skill bar that changes your options depending on your combat decisions. My Force Master operated on a Chi orb system rather than an mp bar, that encouraged more active offensive combat as my auto attack was the only method of building the orbs. My base auto attack was aligned with the fire element, allowing me to set ground based AOE DOTS as well as make the skies rain with fire. While the channel times on these spells are short compared to most MMOs mage class, the enemies faster movement and attack animations leave you very little downtime to get your stronger spells off.

This is compensated through an active dodge skill on a short cooldown (requiring a double tap on the WASD movement key like WildStar), as well as my right mouse auto attack offering an ice based stance swap. Your entire second bar swaps when you switch to your ice stance, giving you access to additional skills even if your entire opposite stance skill set is on cooldown. Here you can unleash the heavy ice CC skills that give you time to channel the more powerful fire attacks in peace.

While most gaming press were goaded into testing the dueling system at this point, I ignored advice to instead suicide against a world boss that would fit right in as one of Naruto’s Toad summons. Now in TERA as a lancer tank with my mystic friend supporting, we took down a variety of world bosses. Sure it was hard as nails, requiring minimum mistakes and long mental stamina draining concentration. But this was possible, while most MMORPGs put arbitrary stat based limitations on you that prevent players from ever utilizing highly skilled play to overcome impossible odds. Well after twelve minutes of one on one duking it out with the world boss, while drawing countless adds due to juking too far to the sides to avoid the bosses’ telegraph attacks, I managed to down the boss solo on a DPS character with 60 of my 2300 HP remaining! That’s how I spell satisfying combat. You won’t find yourself falling asleep in this grind. 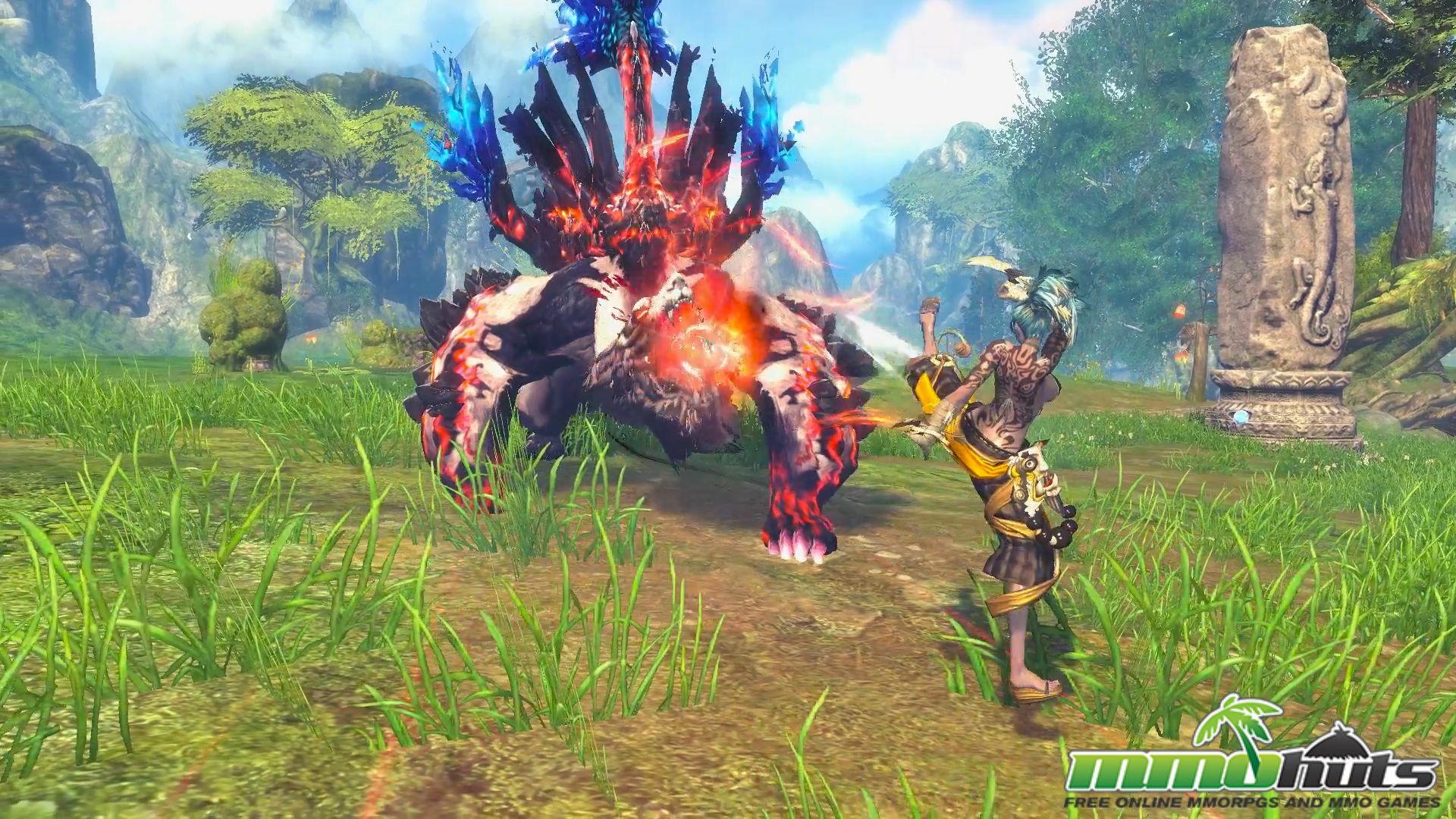 Can't solo a world boss? Don't tell me how to live!

Well OK, James showed up when 20% of the boss’ hp remained to help bail me out. His assassin utilized a variety of sweet attacks that offered location displacement to let him maintain his DPS while still dodging out of the way of telegraphs. Overall this reflection of gameplay has me believing advanced party play in tougher dungeons is going to be a blast to play, and a thrill to survive.

Afterwards we tested out the movement system, a mount-esque stamina based fast travel that will have you skipping on water, running up walls, and power gliding through the air. Despite the trailer hype, these systems are slower than I was lead to believe. Though I can’t say that’s a bad thing. Gliding at a decent pace three hundred meters about the cliff-side waterfalls was certainly a relaxing escape after three hard days grinding away at E3. With an action combat as intense as it is, and open world PK looming, I can see myself becoming quite fond of just running up a tree before taking to the skies like a flying squirrel to chill.

With our demo time at an end, I did the most professional act I know to do in Gaming Press. I pushed ALL the buttons. Not just some, I pushed them all. My expectations were to find a ton of broken user interface in various states of localization. This wasn’t so much the case. Blade & Soul seems very ahead of schedule given the amount of time left before western launch. But to my great amusement, I found the costume previewer menu loaded up with dozens of… unique outfits. Very unique… 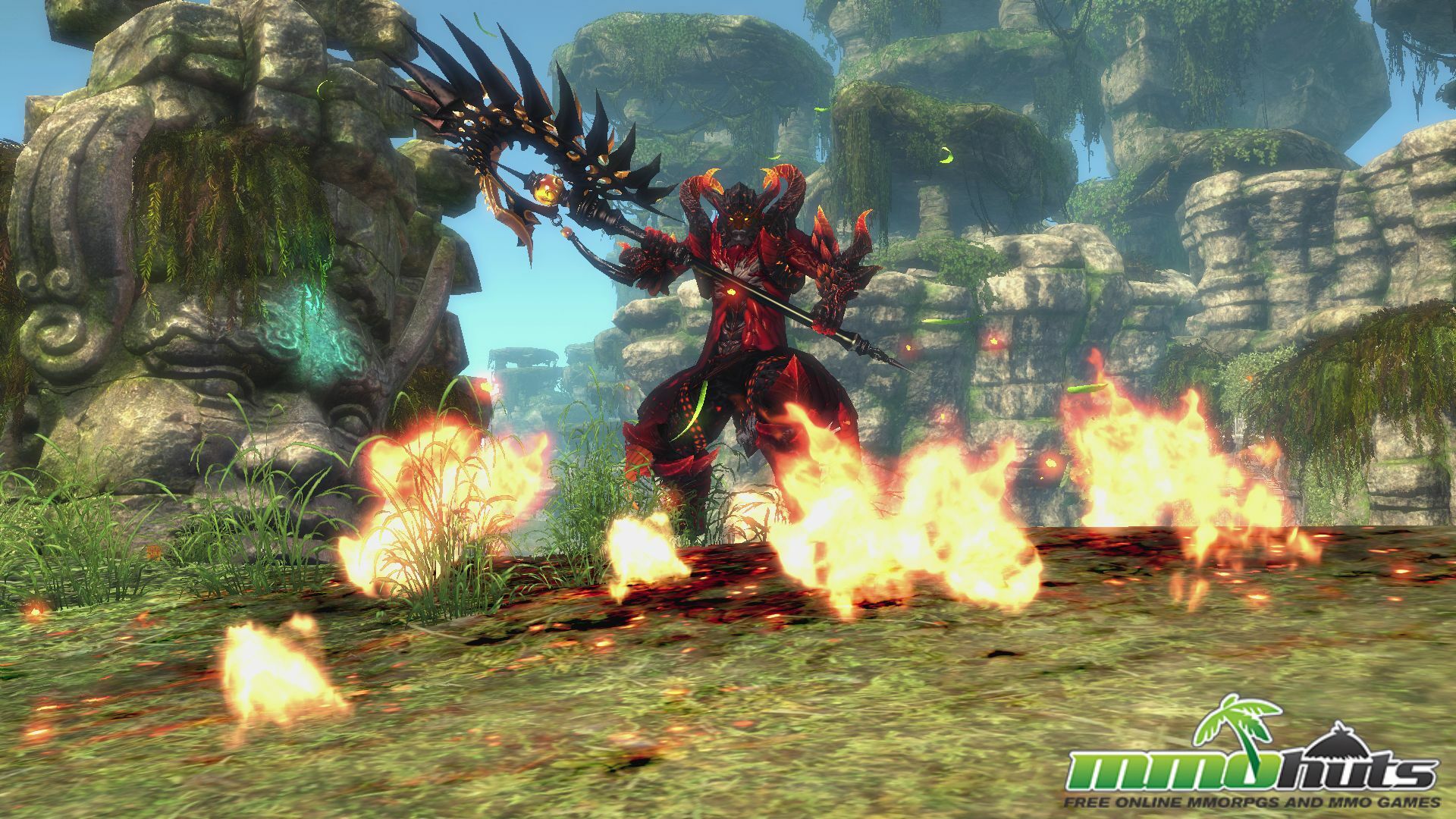 Hellfire costumes are apparently not the pk flagging costumes. Which leads me to believe pk squads will be coming at you decked in full Bronie sets.

After doing MMO and Co-Op gaming coverage for five years, I’ve grown to have a tendency of new games falling below my expectations, even though my expectations from the beginning are low. After fifteen minutes with Blade & Soul, I feel refreshed. This feels like a stepping stone to a more glorious future of MMORPGs. So many great mechanical ideas from other MMORPGs are merged into one complete package, with an art style still distinctly Korean, but unlike anything else on the market. Open world PvP enthusiasts get ready. This summer we have a new home!