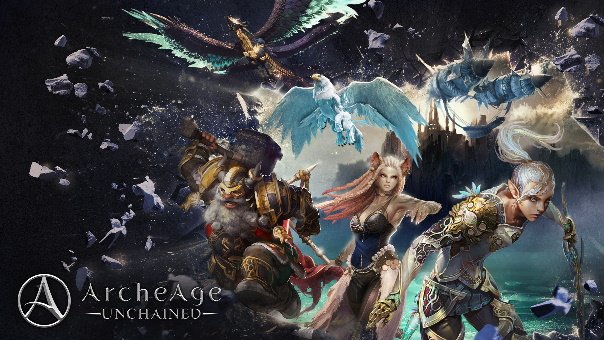 I’ve spent the past couple of weeks working on this ArcheAge Unchained review, playing almost nothing but. Despite the core ArcheAge being PvP-based, I had always intended to take a deep dive into its gameplay. Trion Worlds’ free-to-play MMO started off reasonable and balanced, but later began spiraling out of control into pay-to-win territory. Players could purchase real money items and sell them for in game gold, allowing people to spend cash on improving their gear. This naturally put a damper on the game, giving it a poor reputation among the MMO gaming community. Not all is lost, though: we now have ArcheAge Unchained. But what exactly is it?

Unchained introduces a new buy-to-play option for ArcheAge fans. Purchasing the game version gives you access to all the content currently available in-game. Any of the powerful items found in the cash shop are removed, now available in the game through quests, achievements, or the ArchePass. You’ll find no shortage of incredible power if you’re willing to put in the work to do so. This is not a perfect MMO, but it does let every player play on fair ground. It’s a breath of fresh air that I’ve been waiting for.

Before I go further, let me answer an important question: What is the ArchePass? The ArchePass is a new concept for Unchained, and comes in a standard version and an optional premium version. It gives a weekly series of challenges to players that can be completed for rewards, depending on the type of pass. These challenges require an incredible time commitment, but offer a large sum of potential gold as an offset. It’s a convoluted system with good intentions, and that shows in the fact that it is temporarily disabled at the time of this review. It will be interesting to see how it’s adjusted in the future.

Because of the system’s flaws (and its downtime), I’ve spent very little time with it. Instead, I acquired my fortune through labor and the auction hall, using my labor in the early hours to farm in-demand materials. Labor is a metered energy system shared across your characters, and if there is a way to buy the labor-recharging potions of ArcheAge, I haven’t found it. That, at least, seems in the spirit of fairness.

As the “pay to win” nature of ArcheAge had killed my interest, I went into Unchained with little information. I found that levels 1-30 act as the game’s tutorial. You spend this time in a series of safe zones, completing quests and deciding on your character class. You’re not bound to one class, either. At level 1, 7, and 15, you get a new skillset, each with its own abilities and passives. The combination of all three forms a character class, offering many incredible options. gamigo introduced a new class for Unchained, too: the Swiftblade. This class is a dual-wielding, mobile, quick-striking whirlwind of stabbing and slicing. I found it flimsy, though the damage was there. I decided to pair it with Defense and Archery, so I could kill at range and melee at will.

This means you have an absolute mountain of possibilities to play how you like. If you decide you don’t like the playstyle, don’t panic: you won’t have to reroll a new character. There’s a very easy in-game solution, and it’s free.  You can head to any of the Shrines in the open world and swap out skillsets as needed. The skillsets you have equipped will level together, and inactive skillsets will stop accruing experience. I started swapping mine around level 30, and I was glad to see the other skillsets start at level 15. As for rolling new characters: there is a 7-day wait on the deletion of characters, and with only two characters slots available right now, you would likely be enraged. I know I was! I’m big on creating alts, and when I couldn’t make a new one, I was ready to delete an alt I wasn’t happy with.

While these early levels are a tutorial, there are things you may not be wise to without having played ArcheAge. For example, you receive a set of gear very early on in the game that you should not ever get rid of. Synthesis items can be used on this gear, allowing for a constant set of evolving equipment. This makes every piece of random gear you receive in the game worthless, except for slots not covered in that first equipment pack. Don’t level it up too fast though, because you’ll wind up like me: having to grind three levels without a primary weapon to equip.

There is so much to do in ArcheAge, provided you enjoy PVP. There are dungeons for the PVE-minded, but the majority of content for the game is PVP. The world is divided into two factions, with each dominating a continent, and there are plenty of places in the world to dive into some good old fashioned murder of people that don’t look like you. In contested areas, the more PVP that occurs in the zone, the more its War meter grows. War for a territory lasts an hour, and controlling territory (and killing, of course) is the key to success. Once a war is over, there is an hour of downtime before you can once again rush to usher in a mountain of violence.

Are you getting frustrated because people in your faction are taking crafting nodes from you? How about jerks uprooting the trees you plant? Then kill them, too! This will give you criminal points, and you can end up jailed for it. This is a fascinating concept, especially in such a PVP-heavy MMO.

Visually, I like ArcheAge: Unchained. It does feel improved from the original on a visual standpoint. There are spots where the game’s graphics do not load in immediately, creating horrific moments. I don’t mind the graphics, but they are starting to show their age compared to other MMOs on the market. My other major qualm came from the audio. While the sounds of the game are delightful, there’s a technical issue: Anytime I streamed the game or went to record for any purpose, the audio would cut out. I’m aware that this is some kind of bug that will no doubt be ironed out, but I’d be a liar if I didn’t say it was exasperating to deal with.

Other than that, I’ve generally enjoyed my time in ArcheAge. My problems with the game don’t come from gameplay. It feels fair and I’ve been able to level and explore the game at my leisure. I have never had to worry about people who spent thousands of dollars showing up and obliterating me.

Beyond minor technical issues, and the server bloat during launch, I’ve had a blast in ArcheAge: Unchained. I love that I can level without going into battle if I set up the right homestead. I can put up a house, pay taxes on it, and use the resources from my farm to pay for it. This also gives me experience! The real gameplay is in PVP though. I didn’t expect to enjoy it, but going around with a random clump of my faction destroying people was a hoot.

With Unchained, I can level and improve my gear without having to spend real money to do it. I will grant you, this is the way ArcheAge started, too. Over time, it changed into the P2W mess we see today. I’m willing to give gamigo the benefit of the doubt. As I’ve no doubt said before, I understand the fear. Many of us have been burnt by games promising they won’t offer a pay to win experience. The experience has been a fun romp back through the past.

I may not have nostalgia for the game, but it’s satisfying for me to play. I can spend a couple of hours making money and gaining exp at the same time, then hop off to do something else. I can change classes at will, trying new builds and gameplay features. I had fun, and I hope you are willing to give it a chance too. For those of you that prefer the other version, fear not. It’s still around, and they’ll receive content at the same time. But for me? I’ll be Unchained.

A code was provided for the purposes of this review.