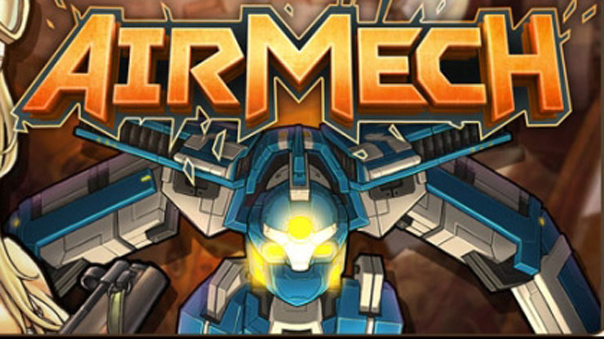 Recently I have not been playing many MMORPGs due to my tight schedule as a student. This has resulted in me playing a lot of RTS (real-time strategy) type games because they allow players to hop on and play without needing to grind any gear or levels. Naturally this led me to try out AirMech which turned out to be quite interesting. Read on to learn more about this new game.

AirMech or AirMech Chrome is an action real time strategy (aRTS) by Carbon Games that is played similarly to DOTA. Waves of creeps periodically spawn and march towards the enemy base in hope of destroying it but are often met by tower defenses. Alongside these creeps march powerful player controlled heroes to aid in this constant siege. The game is playable on your desktop either through Steam or a standalone launcher as well as through Google Chrome.

AirMech is not simply another skinned DOTA game as it offers many new changes and additions to the traditional DOTA style gameplay. Players pilot a mech capable of air and ground combat. While flying in the air, players will mainly be creating and positioning new units. Yes, that is right, it is a DOTA game with the ability to create and position units still intact!

There are different maps offering different game modes for all players with online and offline play. These game modes include classic mode, capture the flag and survival which can be played solo, co-op, or PvP. Classic is the simplest game mode and seems to be the most popular. Classic mode resembles the DOTA gameplay the most out of all the available game modes. 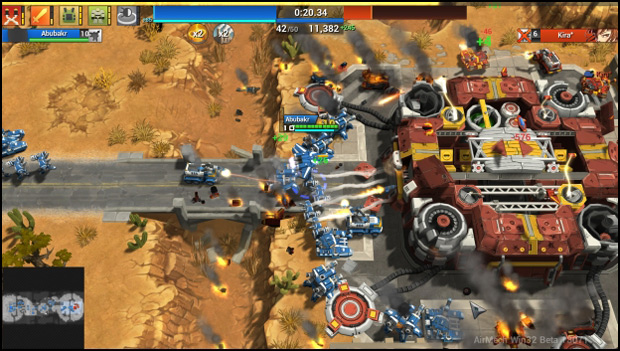 The beta AI really needs to be improved.

In this game mode players, either in teams or solo, fight alongside creeps hoping to destroy the enemy base. While in air mode, players can queue build orders for up to four units at a time out of the many available. These units can then be lifted with the air mech and placed anywhere players deem to be tactically advantageous. Units vary in cost and build time requiring players to carefully manage their resources. This is also very important because if the player’s own mech blows up, it will only respawn if resources are available.

While all units can be used to push or defend, only ground soldiers are able to capture bases. The bases are controlled using a simple system that allows control over bases if four soldiers from the same team enter the base in a row. The AI behind this system needs to be improved as I have found that simply parking a tank in front of base entrances makes it impossible for soldiers to enter the building.

The second game mode, capture the flag, is pretty self-explanatory. This game mode still includes the ability to build your own units but the main goal is to capture the enemy orb and bring it back to your own base. Every time this is done the enemy base loses 1/3 of its HP, meaning three captures result in a win. Capture the flag or CTF does not seem to be very popular as the queues seem to take forever. This is understandable though for a beta game with only around 200 players playing at one time.

Finally I’ll discuss the final game mode, survival, in which players are forced to defend their base from waves of enemies. It is very simple to begin playing but also provides a lot entertainment; definitely a mode not to be overlooked! The AI controlled waves of units start out easy but increase with difficulty as the game progresses. They aim to destroy your base while you are trying your best to keep it alive. This simple yet very fun game mode has got to be my favourite game mode in the game mainly because I play AirMech alone. I could see the other game modes being more entertaining if playing with at least one other friend.

Talking about playing with friends, the game offers a lot of customizability for all players allowing them to build a team of mechs and units that work together. I was rather taken back by the number of customizable aspects of the game as I did not expect a game playable in the browser to offer so much, especially this early in its release! 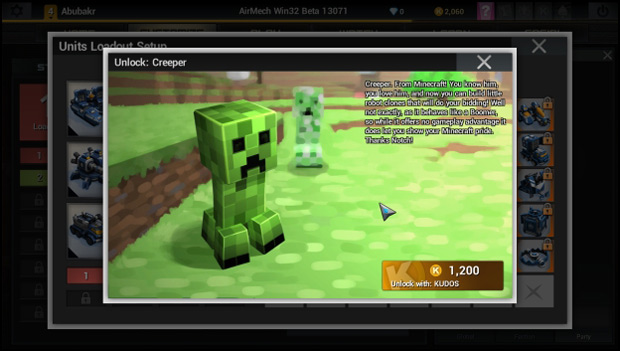 Players are able to customize their pilots which give bonuses ranging from unit repair rate to XP bonuses. There are a decent number of pilots available to choose between allowing for players to experiment for quite a while in an attempt to find one that matches their play style.

Along with various pilots, many different types of mechs are available to prevent the feeling of being locked into a traditional MMORPG class system. Mechs are easily swappable depending on the player’s mood or team members’ preferences.

My favourite area which is customizable is the unit load out. Players will not simply be restricted to building the same structures and units as each other, resulting in some dynamic and unique matches. Since the number of units in a load out are limited, players are forced to weigh the pros and cons of each unit based on their team composition and play style. A good mix of units can have a massive impact on the game.

While the customization options available are great, I am not happy to see non-cosmetic items being locked to players unless purchased. I am against the idea of a strategy game providing advantages to long time players or even players with a fat wallet as these items can be purchased with in-game or micro transactions. A game which focuses on the player with a better strategy coming out on top should not give an advantage to players with access to better items. We have all seen games thrive with revenue generated from only cosmetic items; AirMech should try the same. 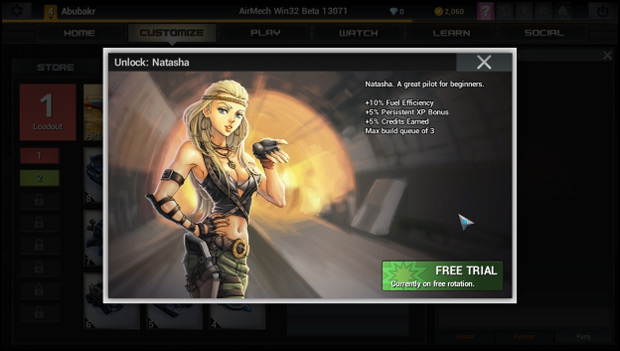 Items go through a rotation cycle, allowing for free trials.

The graphics are impressive for being playable in a browser. They might not be very realistic looking but the art style matches the tone of the overall game. The desktop client supports very high resolutions with nice options such as anti-aliasing to get the most out of its aesthetics.

The controls can be hard to get used to but over time I had become accustomed to them. At first I was not a big fan of the way units are controlled, created and positioned but once I learned all the hotkeys, the controls did not seem so bad.

To conclude, AirMech is definitely a game to check out and worthy of MMOHut’s Best Browser Award in 2012. It takes a unique approach to the traditional DOTA gameplay for an innovative and overall surprisingly fun game. While it is not a game which pulls me in leaving me wanting to play it all day, it is fun to play every now and then.

It needs to offer more to its players; some experimentation to find that hook that keeps players coming back again and again could push this game mainstream. The game is still new so hopefully we will see improvements in the future.