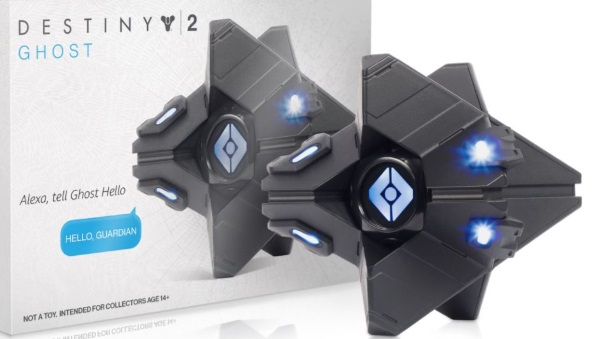 The Ghost Skill, voiced by Nolan North, is coming to Amazon’s Alexa in a free option to all Alexa owners. The main companion for Destiny 2 players, it will create a merger between the Alexa voice-activated system and the Destiny 2 universe. Players can say, “Alexa, ask Ghost to…” and follow up with a variety of queries, such as “tell me which friends are online” or “what should I do next?” and the Alexa will give recommendations for the player, based on the real-time current progress. It can also equip your Raid Loadout, PVP Loadout, and learn more about the in-game lore, such as asking about the Red Legion. There is a physical Destiny 2 Ghost you can pre-order for 89.99 and will be available on December 19th, 2017. It is not required to own the physical Ghost to use the Skill as well.

”The Ghost serves as your guide and companion in Destiny 2 the game, and now players will be able to bring that experience into the real world with them through Alexa,” said Eric Hirshberg, CEO of Activision. “The Destiny 2 Ghost skill is the first of its kind and the most innovative and immersive gaming experience to date on Alexa. We’re excited to give our community of players, who are among the most-dedicated fans in the world, new ways to play Destiny 2 with the Ghost skill and Limited-EditionDestiny 2 Ghost. The lines between in-game and out-of-game have been blurred in an incredible new way.”