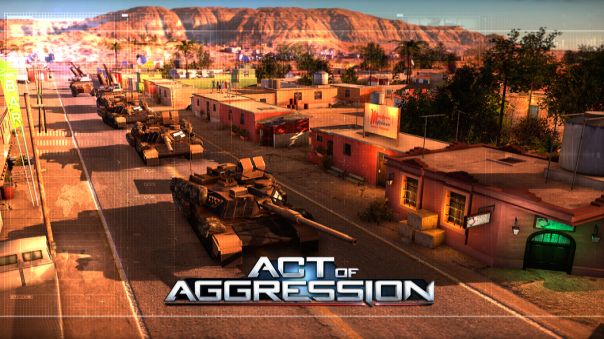 Set in a near-future setting, Act of Aggression – from Eugen Systems, developers of the million selling Wargame series – draws inspiration in its three unique factions from real life technology and cutting-edge prototypes. In a series of trailers designed to showcase the strengths and weaknesses of each of the three factions, let us introduce the US Army, battle hardened following years of conflict.

Take a look at the video below to find out exactly how the US Army deals with an Act of Aggression:

The US Army are a tough veteran force taking advantage of heavy specialization, with some of the strongest individual units in the game. What it lacks in versatility it more than makes up for in brute force – especially when it comes to the M1A1 Abrams Tusk, an upgradable battle tank to be reckoned with.

Next time, we’ll be taking a look at the Chimera – a UNO funded taskforce designed for quick, efficient strikes anywhere in the globe. For a reminder of each of the three factions, including the shady Cartel, take a look below.

Across large, authentic maps, players will harvest resources, build bases strategically, defend them, and produce all kinds of units to match the wit of their opponent. Extend your base network with off-base refineries for harvesting resources, and protect supply networks ensuring a stable income of cash and minerals. You’ll even fight other players for occupied banks as a supplementary income, and capture crews bailing out from tanks and planes or wounded on the battlefield to take as prisoners of war.