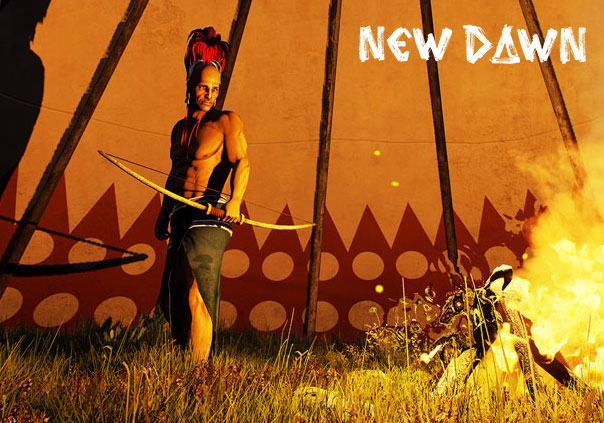 New Dawn is a buy-to-play survival multiplayer game developed by e-visualsoft for PC, Mac, and Linux where players will struggle to survive on an island in the pirate age. In New Dawn terrible pirates have landed on an outlying island in South America towards the end of 1800, filling it with immorality and brutality. The natives of the island will need to rise up against the pirate scum that are taking over their territory, but that will be no easy feat. Their tools are very much inferior to the pirates, so they will need to take what they learn from observing and fighting against the pirates and turn their own inventions and ideas against them. Remember, everything counts when your livelihood is at stake!

In New Dawn players will take on the role of a native who uses any natural resources they come by to build villages and survive. Pirates will continually raid the island in search of resources and riches, so you will need to be constantly on the lookout for any possible threats.

New Dawn includes a huge number of systems to help you combat the pirates and stay safe, some of which are a bit harsher than the others. Players will be able to harvest resources, craft their own tools, craft equipment, craft clothing, become a chief of different tribes, enslave captured pirates, create traps, explore other islands for resources, hunt, climb trees for observations, create alliances, and much more!

Whether or not you have to defend yourself from the invading pirates is not the question, but it is instead how are you going to defend yourself? New Dawn gives you every possible way to fight for your life, and it is your choice how you go about it!