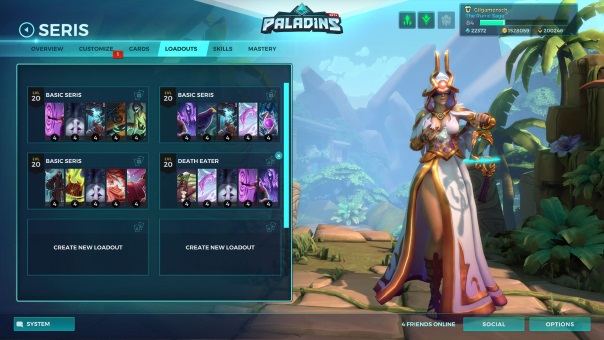 Paladins OB64 is a pretty divisive subject right now. But I made a fresh account and played around, and honestly? I had enough quests and matches to get through and make some progress. And I won matches with ease. Why? Because I have some measure of skill at this game. It had nothing to do with gems, cards, or their level. I was able to play, have fun, even with only a handful of champions that I had access too. That’s been the sentiment of a fair amount of people who have DMed or otherwise contacted me on the stream, asking me to play it live. I guess I’m going to have to. Honestly, I don’t even feel a need to upgrade my cards, since I primarily play bound and ranked. But I can if I want, since I’m willing to level champions, and play as them to get Champion Chests. The cards are there, and they didn’t feel hard to get at all. But I play modes where those level 10 cards don’t matter at all. And really, can a game where the card levels aren’t affected in ranked be called P2W? I say no. The competitive mode cannot be altered with money. It’s all skill, baby. It’s not difficult at all to complete quests, get a first-win-of-the-day on a champ to get cards if you want to play Unbound. There is a little bit of a grind for that mode, as I said, but not for me, since I play ranked/bound. So I’ve sat down and messed around with some deck ideas. I’m not going to do one for everyone because I do have other responsibilities, personal and professional. There are so many cards I feel are usable now in Competitive, and that’s beautiful. Not to mention the modes are split up, so you can still practice with your rank 4 cards and learn stuff. All told, I’m sincerely still happy with this mode. You still have to know team comps, the map, what to do and when. You still need communication.

These cards don’t feel insane to me, though. Maybe I’m wrong, I’m willing to accept that. But many of the cards don’t feel as insanely OP as they were at the start of the OB64 process. That’s definitely a positive for me. These decks are not tuned for Unbound, level 10 insanity though I probably could if there were a call for it. But that’s a mode I simply don’t plan on playing, with the exception of quests/first win of the day. I focus on what I enjoy more, and I recommend you guys do the same. But I actually have had more fun in this new landscape. Is it a little grindier? Sure, I can see that. But you do start off with plenty of cards, which did make me happy, so now I’m not going to have to buy Radiant Chests just to get the base cards everytime a new champion comes out.  I believe there’s a gold cap per day, and that’s something I don’t really like. One of the few downsides to me is it would feel like progress is being gated, and that’s a downside. Because if I’m not earning gold, I’m probably not going to play further. But for me, so far, so good. Without further ado, let’s get into a few decks!

Torvald (Into the Sea): 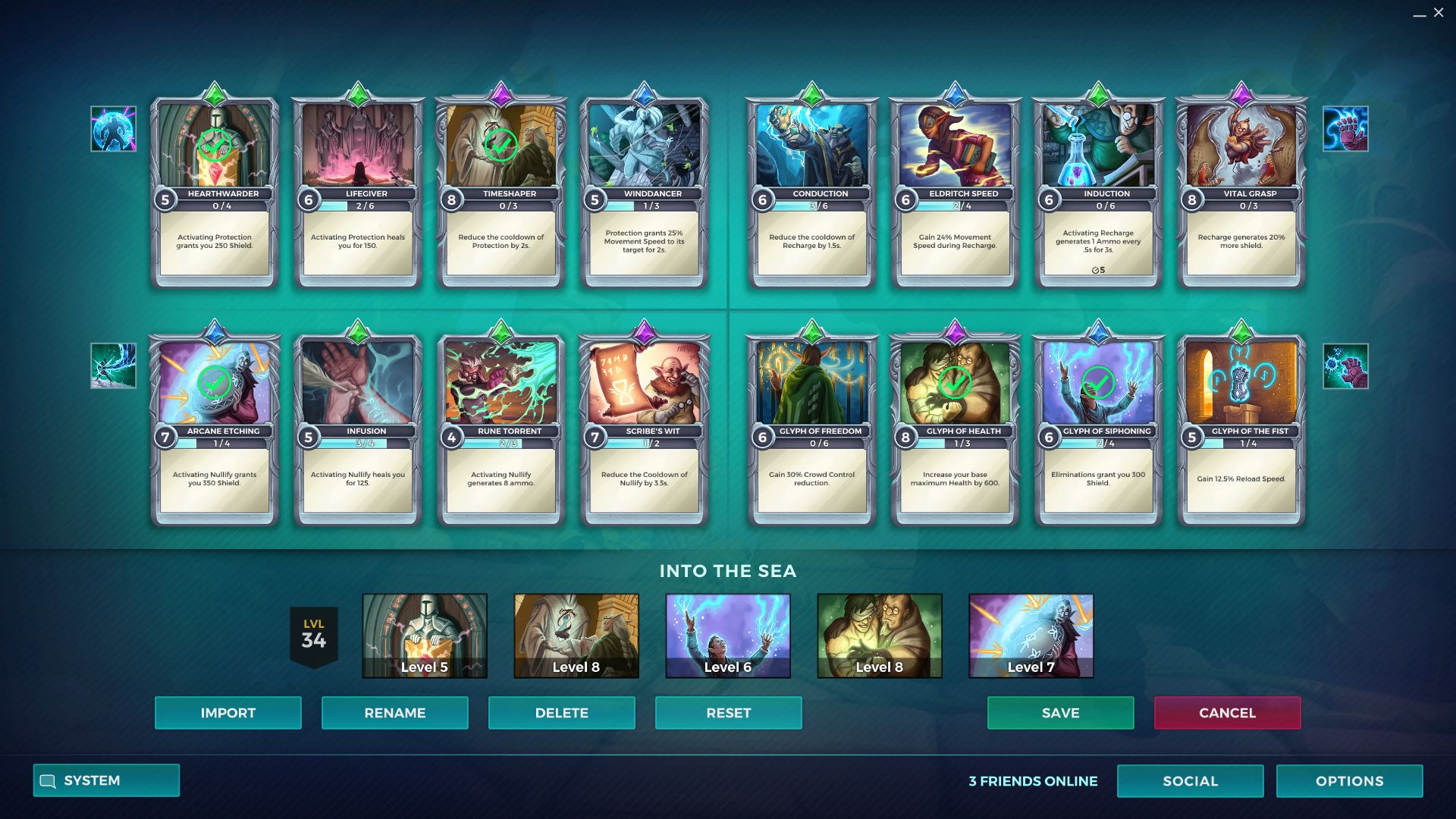 This deck is built around a bit of a balance.  Two cards from his Protection Tree, Two from his Auto-Attack Tree, and one from his Nullify Tree. I chose not to use any of the Recharge cards, because simply taking the legendary has been enough for me, thus far. The idea of this deck is to be using Protection all the time, and get a little something back for it. With Hearthwarder I get Shield for protecting others, Timeshaper to reduce Cooldown. The generic Glyph of Health for Maximum Health boost, and Glyph of Siphoning  to give me Shield for Eliminations. And honestly? I get a lot of them on Torvald.  Arcane Etching is handy to get shield for Nullify, which I try to constantly have ready for Ash/Terminus when they come dunking in to stop them just long enough to kill them.  There are lots of options here that I also considered like ammo builds, putting in Induction and/or Rune Torrent.  As far as Legendary Cards go, his are again, flexible. I use Field Study the most, to give my Allies with Protection bonus damage. In matches where I have no healer, I use Alternating Current (it happens more than you’d think), but I’m really starting to warm up to Thanks, Grandpa, against heavy CC teams. Protection granting CC immunity? Yes please. This build is not too terribly different from the deck I used before. So to recap:

Evie (R. Kelly): Oh come on, I laughed at that. It’s got layers. This is again, a balanced build. A lot of my old builds were really slanted towards one ability, which may or may not be good. They worked fairly well for me. This one is the epitome of balance since I have at least one card per tree. Flicker of Blink to give me health whenever I blink, Killer Frost to reduce the cooldown of Soar, letting me get away a lot easier. Then there’s Cold Blooded to reduce the cooldown of her most annoying ability (in my opinion), Ice Block. Finally, Cold Acclimation to make her weapon no longer do knockback/deal less self-damage. This feels like a Must-Pick to me. There’s also Teleport from the Blink tree, to give it more range, which in a pinch is great. Doubly so for me, because I’m a terrible Evie. Probably one of the worst ever.  I’ve also tried replacing Killing Frost with Swift Witch to increase flight speed, but personally? I’m a CD kinda guy. Her legendaries are pretty good overall, but if I had to narrow it down, it’d probably be Reprieve or Wormhole. I like Snow Globe, but the point of her ult I think, is to stay in the way longer than 2 seconds. So, I pick more defensive/utility Legendaries on her.

Seris (Death Eater): Seris is incredible. Her cards are all really solid in my personal opinion, but the new Legendary makes her other ones worthless. This particular build is around Restore Soul, Shadow Travel, and Soul Charge. Her “generic” cards don’t really appeal to me. That Maximum Health (Revenant) is only 100 hp, that’s not enough for me. So, I use Blood Pact  to heal myself whenever I heal someone else because I always put myself into dangerous situations. Soul Forge lowers the cooldown of Restore Soul, which let’s face it, it’s one of her best basic cards. Bane reduces Restore Soul’s cooldown for each Soul Charge you detonate, and if you can stack a bunch, you heal forever almost. Dark Whisper increases the Movement Speed while in Shadow Travel, but I tend to stay pretty close by and try and fool people with my shenanigans. Veil reduces the cast time of Shadow Travel, which I need because that start-up time on the Shadow Travel power is kind of slow.  Other possible cards are Essence Rip to heal more from Rend Soul, or Spirit Leech to gain ammo when healing people. But as far as Legendary Cards go? Why would you use anything but The Void Abides? It gives a single-target healer an AOE, healing for about 40~% of the original amount. Is it game breaking? Probably not. But would it let you heal both tanks at once? Yes, yes it does. Makes teamfights a lot easier to win on top of that. 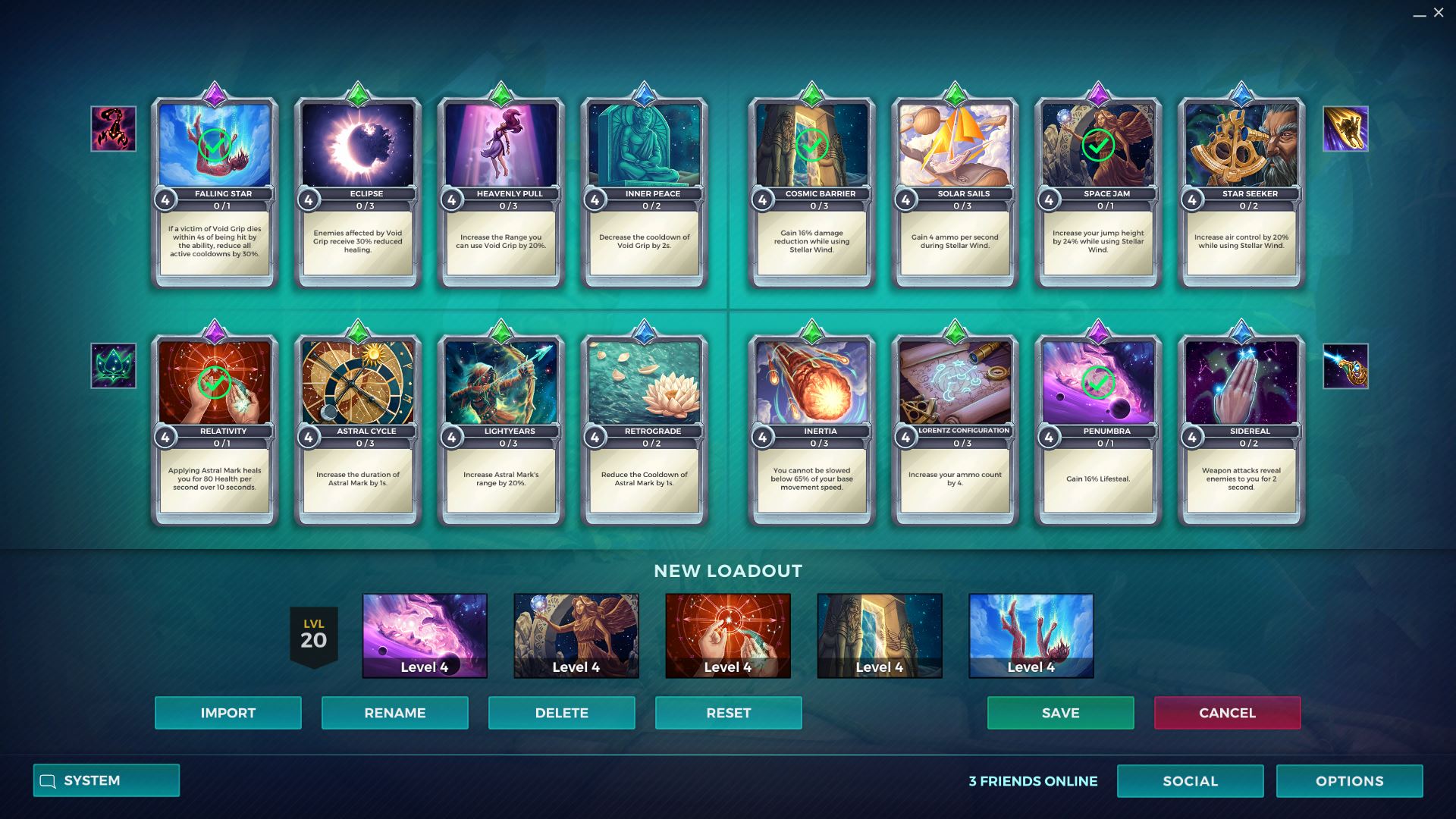 OB64 Has Changed the game. Damage Jenos is viable.

Jenos (Death Star): So, I don’t really play many damage characters. With the new Jenos changes, honestly, I could play him as damage and just ignore people that get butthurt about it. He’s got the tools to go from healer to damage with a healing power. This is mostly thanks to his legendary, Binary Star. Between that and Penumbra, you have everything you need. Penumbra for the lifesteal, Binary Star for bonus damage. Then I run Cosmic Barrier for damage reduction in Stellar Wind, and Relativity to get a heal whenever I heal someone with astral Mark. Space Jam gives more Jump Height during Stellar Wind, and finally, I pick Falling Star to reduce my cooldowns when a victim of Void Grip dies within 4 seconds of being hit. So you make sure to grab someone about to die, and get your skills back. Though I also really like Solar Sails to get ammo back during Stellar Wind, which can really save your ass in a pinch.  In this particular iteration of Jenos, you only use Binary Star. Use no other legendary, because this is damage Jenos, not healer Jenos. Please bear that in mind. Don’t do this if you don’t have a healer on your team. Don’t be “that guy”.  This build, along with some skills will let you dunk some dorks and get free gold.

Please note that these do not include skill. Even using them, you could still be awful, if you’re awful with a champion. But practice makes perfect, and this is at its core, still a skill-based game. And at the end of the day, play the mode that makes you happy, but I do recommend giving it a shot yourself and see what you think. So far though, I’m enjoying it. I hope you do too.