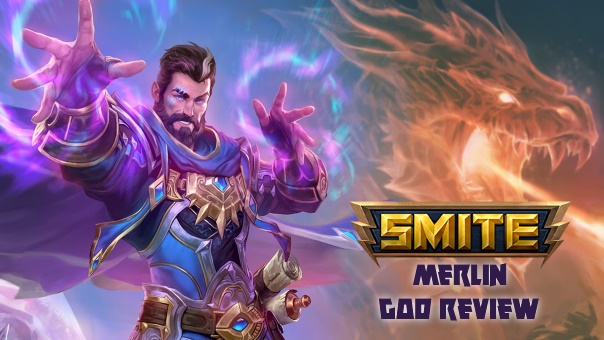 Editor’s Note: We also have a SMITE ‘2 Hot 4 U’ Battle Pass and Deadly Desire Da Ji Giveaway in the link below.

The second addition to the Arthurian pantheon in SMITE is a little-known-mage known as Merlin. Maybe you’ve heard of him in a book somewhere. Merlin is often credited as being a “Cambion”, which is a person born of a human woman and an incubus – which explains his supernatural/magical powers. He was King Arthur’s advisor until he was bewitched by the Lady of the Lake (and some say she killed him). He’s a fascinating figure and has been presented in a variety of ways across media. He’s also a pretty fascinating character in the world of SMITE, as he is the first god/figure who has three stances to switch between. This, coupled with the long cast time of his ultimate (stance switch), puts him in the “Hard” difficulty, and I’m reasonably inclined to agree. The difficulty comes from the range of abilities he has, and the length of time you have between stance changes. Were this number reduced even a little bit (outside of CDR), I think it would make him a bit easier to play.

I think Merlin’s kit has plenty in it without it feeling overly bloated, which is amazing. Most gods like this (King Arthur and Cu Chulainn are prime examples) have kits that, to me, feel very heavy and ridiculous. Each of his three stances has a particular purpose: Arcane Stance helps him escape or set up kills/team fights, Fire Stance is his primary big numbers/damage, and Ice Stance is all about Crowd Control. On a personal note, I’m least excited about Fire Stance. I feel like I need to be far too close to people in 1v1 situations to get the most out of it. I love it in team fights, but in duels, I tend to lean on Ice/Arcane. Once they’re low enough, if I can swap over, I certainly will in order to pelt them with fire damage. His kit does have nine base abilities though, so I’m going to go ahead and get started with those.

Passive: Overload (Special): When Merlin casts a spell, he gains a stack of Overload. When Merlin next uses a Basic Attack, it will be augmented with lightning, dealing extra damage (10+15% of your Magical Power). This can stack three times and has a duration of 5s.

Ice: Blizzard (AoE, CC): Merlin conjures up a Blizzard a location he designates, and after a delay, ice falls from the sky, dealing damage every .5s. Enemies hit take damage and become progressively more Slowed, while they stay in the area of effect. The blizzard lasts 4s, and the slow lasts 2s. Each tick of damage refreshes the slow, and is 8% slow per tick (up to 5 stacks). Damage per Tick: 10/25/40/55/70+20% of your Magical Power. Cooldown: 16/15/14/13/12s

Ability 3: Flicker (Teleport). Merlin quickly teleports a short distance ahead. It can go through walls. The Flicker cooldown is shared across all stances. Cooldown: 22/21/19/18s

In my estimation, Merlin’s primary damage comes from the Fire Stance, but the downside is that it’s fairly low-range. His 2 (Dragonfire) can be deployed at a nice range, but his 1 (Radiate) is a line of fire that pops out in front of Merlin. You can move with it, but it’s pretty risky unless you’re a pretty seasoned Mage. Most of the other mages are not casters you want to get close enough to, and so Fire Stance is not the one to start in. It’s the lead up/follow-up. Personally, despite Arcane Stance being regarded as his lowest damage, it’s my preferred poke, alongside Frostbolt. Frostbolt has a nice low cooldown, and the slow attached to Blizzard is also handy, and safe. That being said, Fire Stance is his best wave clear, between the 1 and 2. This leads back to my original thought: really planning ahead what you’re going to do. I cannot stress enough how key it is to think a step or two ahead on what stance you want or need to be in later. Popping 2+1 is a pretty solid go-to combo no matter what stance you’re in, to boot. Then if you’re feeling fancy, you can swap again to another stance, and hit them with yet another 2+1 combo.

As far as his abilities go, I’m grateful that both the 1 and 2 across all three are useful damaging abilities, which makes it a lot more reasonable to say which skills I would level up first. I tend to lean towards 1, then 2, a point or two in 3, and then points in 4. Merlin’s 1 is solid poke and damage across all three powers, though Fire has the least range. It’s still ideal to have points in it for solid damage in any range/situation. Merlin’s home is, of course, the mid lane in Conquest. He’s bound to be a monster in the lane for his mobility and the flexibility of his kit. But anyone who reads this column knows exactly what I thought of next – can Merlin support? Lord yes he can! Myself and one of my friends I regularly play SMITE with were talking about Merlin + Artemis. Artemis sets down her annoying trap, and Merlin uses Vortex to pull people directly into it. From there, swap to Ice, Blizzard+Frostbolt to prevent their flight, and by then Artemis should have obliterated them with critical hits. That’s one of the fun things about Merlin, that he can pull people into the annoying stuff you want people to be in. Janus Portal, within range of Ares/Cerberus Ults, within range of Da Ji’s Pao Lao – communication can create some devastating combos and team fights. I can also see Merlin having potential in the jungle. It might be a little slow, due to him being squishy, and his long cooldowns, but the potential I’m certain is there.

I’m not certain if I have made it clear enough yet, but PLEASE BUILD COOLDOWN REDUCTION ON MERLIN. Chronos’ Pendant is a Must-Buy on Merlin, and no matter what build I run, I want this and Shoes of Focus. I’m torn between Spear of the Magus and Spear of Desolation. Spear of Desolation is expensive, but as long as you’re getting kills/assists, your cooldowns plummet, and it becomes incredibly easy to obliterate anyone who is foolish enough to do battle with you. Another must-buy for me personally is Gem of Isolation. It has HP, Magical Power, CCR, “and” your damaging abilities have a slow. This is in addition to the slows he already has. It’s beautiful and disrespectful. If I’m going to build a defensive item, it’s either Breastplate of Valor or Hide of the Urchin. Chronos’ Pendant and Breastplate of Valor early mean I have less damage, but it means I have much better cooldowns. I’m a big fan of the long-game and am not as concerned with piling on a million kills by 15 minutes.

Sure, Support Mages aren’t tanky, and Merlin is “less” tanky than your average mage. You can supplement this with a Guardian Jungler. I’ll admit that it’s not ideal, and it’s probably not something you’ll see in many of your Conquest matches, but I like it from a conceptual level. It would probably run stuff like Breastplate of Valor, Gem of Isolation, Chronos’ Pendant, and from there a few tanky/aura items. Your goal isn’t to get all the kills, but merely to set them up for your friends to get. They are much better in the mid-lane, but I think it would be a fun experiment for someone with a bit more skill than me.

Honestly, this build is pretty much go-to for me, with an occasional defensive item slotted in. The first five items are musts for me, then the last two (counting shoe sales) will vary wildly.

I absolutely love Merlin. I think he hits good and hard, has plenty of variety, and can move around the map as needed with the greatest of ease. On a personal level, I would love to see the stance change lowered by about 5 seconds or so at the most, but I don’t really forsee that happening. I think Merlin’s in a good place and will have a home on pro teams as the competitive season kicks off. His damage has the potential to get out of hand, and I could certainly see his numbers being lowered slightly, perhaps on Fire Stance. I’m torn though because I think personally he’s in a good place, and is unique among the rest of the gods. It’s very hard to keep innovating and coming up with new ideas, especially with this many gods in the roster. I like how Merlin plays, and it’s pretty rare for me to play a non-Guardian and feel like I really want to keep going after new skills and practice with him. Merlin fits that bill without a doubt. One of the reasons I fear he’ll see a nerf is that I was successful with him. That’s a clear sign that a damage god is pretty strong. The Master of Magic is certainly not a god to be taken lightly.