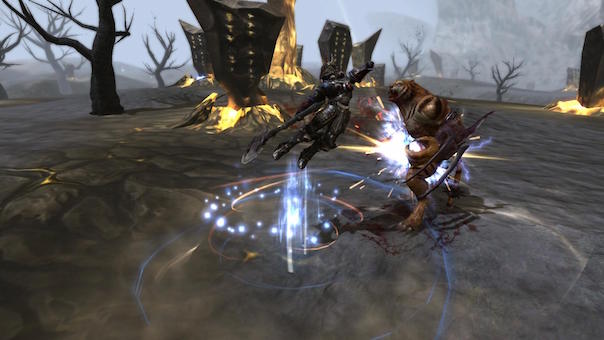 The launch includes the opening of the game’s cash shop, which will sell customization items, inventory space, and additional boosts to help with quest. Launch events include a max-combo screenshot contest, a boss monster video contest, an Easter Egg Hunt, and a 10% bonus to purchased currency until April 10. The game also offered a special April’s Fool event yesterday.

Los Angeles – April 2, 2012 – The fantasy world of Akkadia is now available to all players, as NEOWIZ GAMES invites everyone to take on the combat-rich challenges in its intense, combat-based massively multiplayer online role-playing game (MMORPG) Seven Souls Online. The sci-fi fantasy adventure officially launches today with the addition of a cash shop, where players can purchase items to aid with questing, such as additional inventory space, customization options and more. Gamers can register now to take part in the intense action for free at http://www.sevensoulsonline.com/.

In Seven Souls Online, fans unleash their inner demon in a fantasy world that combines ancient East and West with elements of science fiction. Players can choose from three character classes, the magic-enhanced Manatech Rebel, the savage Imperial Guard and the cunning Exiled Avenger, then fight their way through vast armies of enemies to defeat the mana-hungry Elysians. Open-world, free-for-all player versus player (PvP) combat means adventurers must be wary and forge in-game friendships and alliances to survive.

To commemorate the official launch of Seven Souls Online, NEOWIZ GAMES is offering several in-game events for players to participate in:

Anyone in-game on April Fool’s Day should also keep an eye out for giant Topos roaming the landscape. They’ve come out of hiding for one day only, and should be mostly harmless.

For full info on these contests and other GM events during open beta, fans can “Like” the game on Facebook at http://www.facebook.com/officialsevensouls for additional information and updates. Anyone can register to play for free on the Seven Souls Online website, http://www.sevensoulsonline.com/.