Forged by the efforts between the Soul Caibur and Tekken development teams, Bandai Namco has recently released their newest “fighting game” title called Rise of Incarnates onto Steam’s Early Access program. This offers up a 2 vs. 2 battle system where players form up unique team compositions against their opponents as they dash, fly and bash each other across a war torn battlefield.

Now, the reason why I put the words fighting game in quotations is because from the traditional standpoint, Rise of Incarnates is anything but a traditional fighting game. Rather, if you have ever played mech action games like Virtual-On or Gundam Extreme Vs, then you’ll have a much better idea of how Rise of Incarnates plays out. As a matter of fact: most of the gameplay elements for this title were taken straight from recent Gundam VS. titles that have been available in Japanese arcades from quite some time. While it certainly provides something uncommon to the fighting game genre, there’s still a question of how well it plays and how well it maintains itself as a F2P game while remaining fair for a competition focused game. 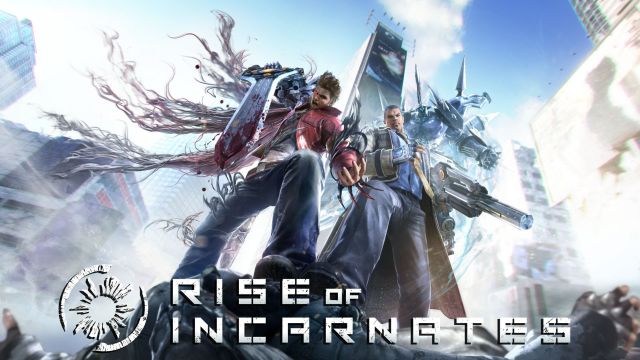 When starting the game up for the first time, players will be greeted with an opening cinematic video and instantly launched into a tutorial session that will teach players basic and advanced gameplay techniques. While the tutorial may be very clear and easy to understand, getting a hang of the controls is a whole different story. The game offers up two control schemes: one for keyboard & mouse, and one for gamepads. Attempting to play using the mouse and keyboard setup may be a bit uncomfortable at first due to the fast-paced and twitch-based nature of the gameplay. In Rise of Incarnates, timing and quick reactions are everything, so it’s almost necessary to have your fingers on or near every command possible. With this is mind, getting used to the mouse and keyboard setup is possible, but playing the game using a gamepad felt way more responsive and natural.

The commands that are available include normal and special abilities for melee and ranged attacks, dashing and jumping, defensive guards, target switching and awakening abilities. Switching targets is one command that players will have to get used to as soon as possible, as they’ll constantly be switching back and forth between enemies as they dash around the screen and prepare opponents for team tag combos (that can be performed by pressing forward + melee attack button twice), which is very satisfying to pull off in those close quarters situations. The different kinds of combo attacks that can be performed merely amount to holding a directional button and mashing the melee attack button at first, but once players understand dash cancels and attack cancels, they’ll be able to perform various custom combos. However, these custom combos do not allow much room for creativity due to the damage threshold that opponents can take before they plummet towards the ground and become temporary invulnerable to damage. 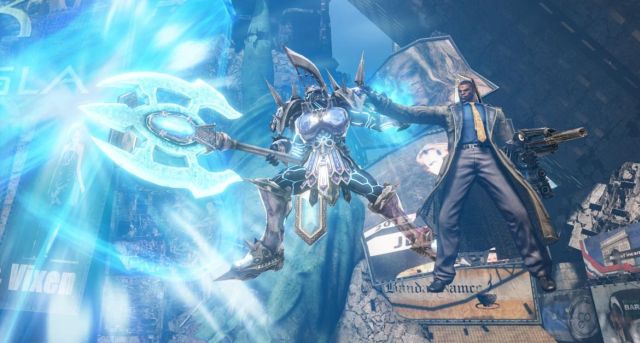 Rise of Incarnates features an adequate amount of game modes to choose from, including ranked matches, custom lobbies, bot matches and training. Both ranked matches and bot matches can be played solo or with a friend via Steam’s friend system, and training mode gives very simple on-screen guides on how to play each character individually. Each mode works the way they should, but the lack of players in custom lobbies and early ranked matches may be disappointing for newcomers. Ranking matches, in particular, will always try to find players of equal skill, which is all fine and good, but when the system doesn’t find active players of equal skill, the game will set players up against bots to make up for them. For many new players, they may have to go through a handful of bot matches in ranking mode before they’ll ever fight against human opponents, which is a bit frustrating to say the least.

There’s also only two stages to play one, however. Between New York and Paris, which both are very nicely designed and contain very noticeable landmarks, these two stages do not offer up much interactivity besides a few destructible objects and will become dull to play on very quickly.

One interesting aspect for Rise of Incarnates is the stock system: Each team has six respawn stocks that they share among their teammates and each character has a predetermined set of stocks from one to three, so if you were up against a team that has characters with 1 and 2 stocks, it means you would have to defeat each enemy opponent two times in order to win, while a team that has two enemies with three stocks would only have to be defeated once each.

The reason why some characters have multiple stocks while others have one is because some characters have more HP than others and are less fragile in combat, thus getting defeated in a match is more costly. This creates a unique meta between you and your teammate in order to come up with a solid tag team that balances out the risks and rewards of their abilities.

As unique as the stock system is, character imbalances are still noticeable between high and low stock characters. During the time of this review, characters such as Ra had so much HP and so many zoning and ranged tools at his disposal that he was fairly untouchable in 1v1 confrontations. While characters are continuously being rebalanced every week, it’s still very clear that some characters need to be tweaked more than others. 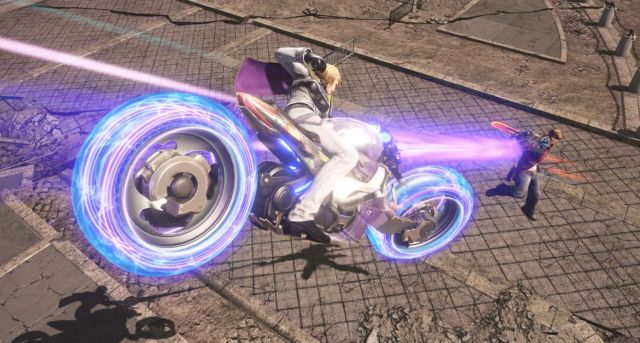 Bouts in Rise of Incarnates are an exciting mix between arcade mecha shooter action and fighting game combat, as players will need to attack fast and think even faster when dealing with two opponents at the same time. Players can set opponents up for various tag combos with long ranged attacks and animation locked melee attacks, and they’re both very hard to perform in heated matches, but very satisfying when pulled off. The environments that players battle in can also be used to their advantage, as they contain various structures to hide behind. These structures can also be destroyed, so players can’t abuse them by attacking from a distance and then hiding until their skill meter recharges indefinitely.

Speaking of skill meters: Rise of Incarnates features a skill meter similar to how skills work in certain RPGs: each attack has a set number of uses and, once depleted, players will have to wait a small amount of time for their skills to recharge which keeps the ranged attack spam down to a minimum.

Overall, besides from a few character balance issues as stated above, the core gameplay for Rise of Incarnates is actually pretty enjoyable. However, it’s the customization that comes beforehand that drags the gameplay down from a competitive standpoint, as I’ll explain in this next piece… 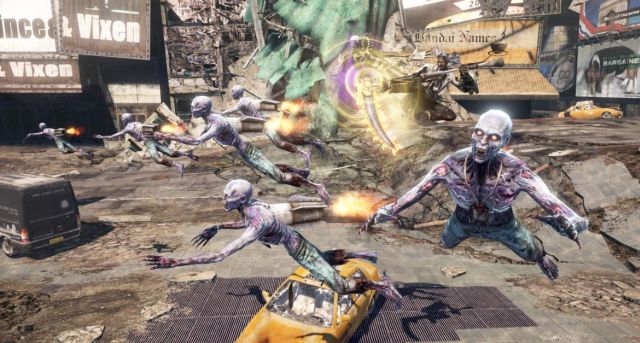 Rise of Incarnates features several different character customization options, some that are very acceptable and others that are not. Options such as character skins and cosmetic items are available for purchase using IP (Cash purchased currency) in order to give favorite characters an extra special look. But then there’s skill cubes that players can earn either by playing through matches and leveling up their character or by purchasing them from the shop using LP (in-game currency). At first, the skill cube system seems fair enough, allowing all players to access enhancements of sorts. Yet as you get more experience under your belt, players will realize that paying players can gain an upper hand on non-paying players by spending money on IP, including more skill cube grid space, faster enhancements and more. Players may also be able to purchase extra skill grid space using LP, but that will cost players a hefty amount which will take days or even weeks to obtain, depending on a player’s dedication to the game. Having any kind of statistical advantage over players in a competition-focused game already gives a rise for concern, but being able to buy stat advantages faster than players that only pay using in-game currency seems like it could create very huge imbalances in the long run.

The presentation for Rise of Incarnates gives off a very comic-book feel to it, which works out well considering that the promotion leading up to the game’s release had a very extensive e-comic series tied to it. The character designs are also very stylized, and very reminiscent of recent titles from PlatinumGames such as Anarchy Reigns and Vanquish. The sound design contains very generic rock music and above-average voiceovers for each character, which isn’t nearly as impressive as the character designs, but it gets the job done and makes the tone of the game feel appropriately serious. In terms of raw visuals: Characters and environments are very detailed, but the lack of anti-aliasing built in will make the game look like a very dated PlayStation 3 title. 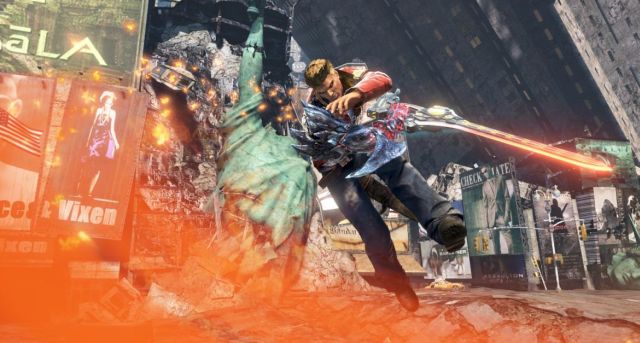 Rise of Incarnates also features various community features including rankings and circles. Rankings allow players to see how well they stack up against players all around the world, while circles allow players to start up a clan in order to participate in circle lobby matches. There’s also an option to watch live matches via Twitch streaming so players can watch and learn from experts on how to play. Besides from the option of watching live matches, both rankings and circles serve their purposes well.

The community is generally filled with experienced players that will not hold back against newcomers, so unless you’re confident, prepare to enroll into the school of hard knocks when participating in ranked matches.

If it wasn’t for the faster stat advantages that players can purchase using real money, Rise of Incarnates would have gained a very high recommendation from me. The core gameplay is very exciting and has rarely been seen in the PC gaming space, let alone the F2P gaming market. The enhancement system is the only thing I can see holding this game back from gaining more popularity, and I’m really hoping they’ll consider changing it in the future. Still, this game is certainly worth a try and will provide quick bursts of entertainment.