Three is a Party, Four is a Team Deathmatch:

Multiplayer is a large part of the “Ring Runner” experience, easily as large as the Single Player campaign. However, as of this writing, there are very few people playing online, as the game is new. This will surely change, and I will be able to do more than play with bots, which is an exciting thought. There are six modes you can choose from, two being co-op only. Ring Runner has Zombie Survival, Gladiator, Wave Survival, and Spire. You can start your own and have others join you, or quick search to find something that suits your needs. You can also make public and private games, for when you just want a few friends to blow stuff up with. I am by nature terribly competitive, and so these modes really fill a need in me; even if that need is to destroy my friends with rockets.

Space Defense League: This mode is a blend of games like “Silent Death Online”, and more contemporary MOBA style games, such as “DOTA2” and “League of Legends”. The goal is to destroy the enemy’s core, but to do that, you must get past a variety of other obstacles; these take the form of 9 defensive towers. Defeating towers confer a variety of bonuses, and getting kill streaks gives “veterancy,” which confers bonuses depending on what type of hull you pilot. These fade when you are blown up. There are also fleets of AI-controlled hulls that are much smarter than their counterparts in other modes, which is a relief, and a curse. They pick out weak links, and fly in for the kill. You are not confined to one ship in this mode, either. I recommend highly setting several up with a variety of abilities and uses in your Hangar Bay, so that you can switch after death. This is similar to custom classes in “Call of Duty” or “Battlefield”, and I am glad, personally, that I was not stuck with poor choices I may or may not have made. Crates drop after towers are destroyed, and these can give you shields, or other power-ups that will assist you in destroying the other team. This can be played in co-operative mode, or versus.

Zombie Survival: Who doesn’t like blowing up zombies? Nobody that I know! That was one of the big draws to the “Call of Duty” franchise. This mode is no exception. You and up to three friends journey to a map where zombified hulls continue to infinitely spawn, in their attempt to destroy you! It is your task to blow up as many of them as you can, in hopes that they will finally cease to exist once and for all, saving humanity. However, as the vast majority of zombie horror goes, there is no end to the threat. There are your average zombie ships that track you and shoot with undying zeal, but there are also special zombie ships. These range from the annoying Grabber that pulls you in, Shielders that help their fellow zombies, to the Pushers, opposite of Grabbers, who knock you into waiting hungry mobs. Then there are more dangerous ones, such as the massive Caretakers, and Vampires, who drain your shields as long as they can. The most dangerous that I encountered was the violent “Hunter”, so dangerous that it is given a warning when one is spawning. It has incredibly powerful laser weaponry, and will ruthlessly hunt you down. 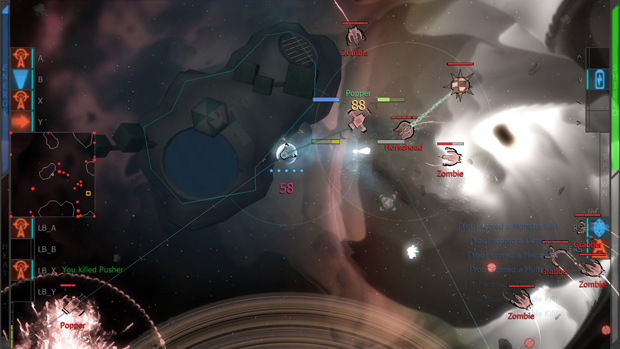 Wave Survival: Wave Survival is another blast from the past. It is reminiscent to me of “Galaga” and its fellow “Galaxian”, where wave after wave of various hulls try to destroy you and up to three friends. There are regular hulls, which just fly in shooting; swarms of weaker hulls, which come in large packs to try and catch you off guard, and then there are bosses. Boss hulls are the same ships you might find in the regular gameplay, but they do not adhere to the standard strengths and weaknesses. Boss hulls typically have stronger weapons and better shields. They also tend to be more aggressive. This was the first time I encountered a “boss” hull, since I tried this before Gladiatorial combat. These waves are random, and appear on a fairly large map. They do not all dive from the same area as in “Galaga”, but instead can appear in a variety of places, from behind scaffolding or asteroids, to right behind you. You never know what may occur, but know that it is always exciting. 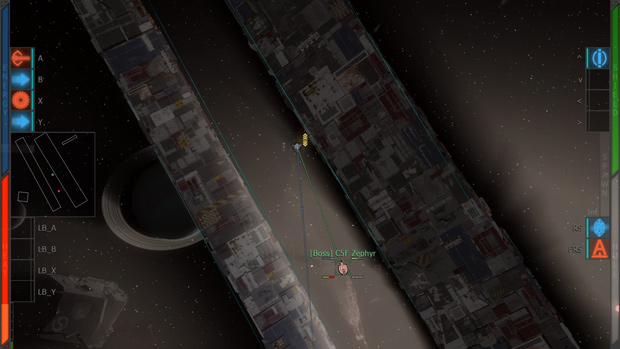 Gladiator: Though you can play Gladiator with friends, I personally played solo to truly get the feel of one on one combat. The ships vary, and are all built to normal mode specifications. You will not get something out of “Armored Core” where some of the boss suits break the rules and equip things that they normally could not on a Core. Bosses show up, which are much stronger than the average suit. Better shields, more health, more damage. But the challenge is great, and this is another favorite mode of mine. 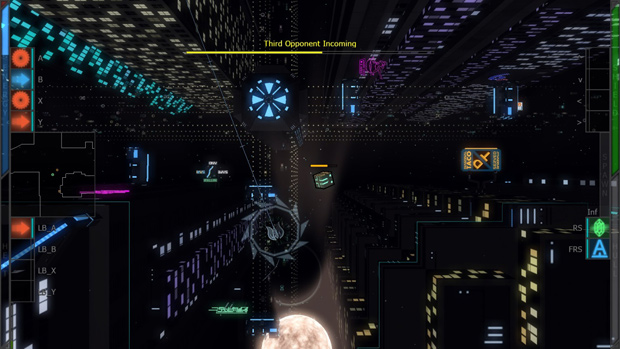 Spire: This is a mode similar to SDL. Playing either with friends or against them, your goal is to destroy the enemy core, much like in SDL. However, there are no turrets and obstacles in the way. There are however, four shield generators on the core itself that you must destroy. There is a variety of debris on the map though, to provide cover and clever ways to defeat enemies. While there are no towers to stop, there are other defenses on the map to contend with, and a little touch of chaos on each map to make each instance of Spire unique and fun. In Spire, when the match starts, you can select one of the two factions, and from there, the fun begins.

Deathmatch: Oh, the Deathmatch: a tried and true staple of any online multiplayer game. Instead of running around on the ground, using AK-47s, you pilot a hull, and use your weapons to blast the enemies on the map. Last man standing wins. There are no teams, though I am sure alliances could be had, if brief and heated. You can play against the AI as I did, or competitively online against other people. First to thirty kills wins! If the game drags on for ten minutes, the winning criteria changes to whoever has the highest amount of kills. Deathmatch was the very first thing I tried, as I perused menus. It was a blast! I love team deathmatch in other games, but this “Every man for himself” mode was very appealing. All in all, a great way to round out a set of multiplayer modes. 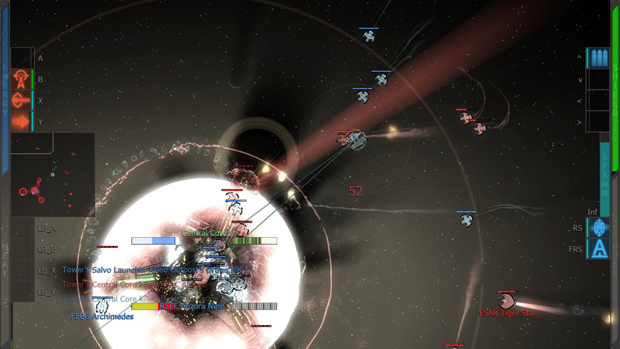 The graphics in the actual missions were of a minimalist style. The ships and debris themselves were pretty simple and uncomplicated, but the backdrop is where my breath was stolen. The background of each stage was a delightful scene of outer space, or planetary skies, luminous hues of violet and red and orange. Each one was artful and tasteful.

I am very appreciative of this game allowing full controller support, and the buttons are very easy to access. You can use the keyboard and mouse as well if you prefer. My big complaint with the controls is that there is a line from your ship to wherever you are aiming. I found it sort of difficult to get a bead on most of the ships, so I wound up blasting into empty space more often than not. But the controls other than that were responsive and fast. There was no button lag that I noticed, but the aim was something that really hurt my enjoyment.

Ring Runner has a great deal of features in this game in the form of game modes to play in. If you do not have people online that you wish to play with, there are always bots to side with or against. The features however, go hand in hand with Customization this time around, so I put them together. You can research parts and weapons, as well as hull designs throughout the course of playing this game. There are tons of things to do, and add to your ships. No two hulls ought to be alike.

The music changes quite a bit in the game, but it is always very enjoyable. Through the campaign missions I played, the music was of a piano variety, reminding me of Chopan. It was very soothing, and gentle, though I fear it is a bit out of place in space combat. The music is a delight, kudos to their composer. But when I think space combat and chaotic goofiness, I think a little something different.

Interested in trying Ring Runner for yourself? Tell us why in our forum giveaway event for a chance to win 1 of 5 steam keys!