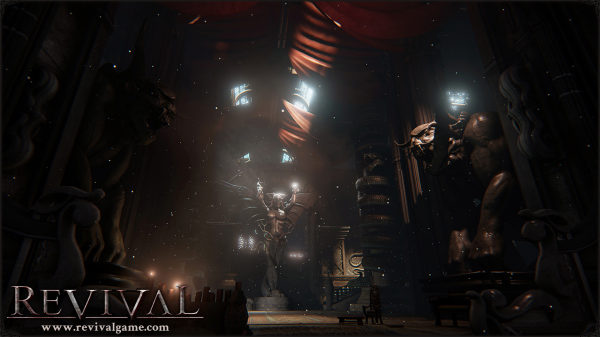 Independent developer IllFonic today announced that Revival will release the first stage of its development this February. The studio has announced that they will be utilizing the power of Unreal Engine 4 to achieve the rather ambitious goal of creating a living-world that provides an uncompromising dark-fantasy role-playing experience.

IllFonic will be releasing Revival in multiple phases, with the initial phase introducing player housing and rewards for in-game characters. In this first phase, Illfonic will open a small piece of Revival to its ardent supporters in the form of player housing. This unique development plan will give pioneering players the chance to be involved from the beginning as they explore their new homes, customizing and upgrading them in preparation for the limitless adventure to come.

“I’ve spent a decade working in the MMO space,” Chris Holtorf, one of Revival’s Lead Designers and Lead Lore added, “and Revival represents the lessons learned throughout the development of three previous online titles. My roots are in tabletop gaming, so the focus on directed play and the dynamic content, made possible by a Live Storytelling team, is right up my alley.”

IllFonic’s unique combination of old-school role-playing, Lovecraftian horror and live storytelling invites players to take their place alongside gods and heroes in an epic new world of exploration, magic, commerce, and villainy. Revival promises ongoing storylines and content that changes in concert with the players’ actions, directed by a 24/7 staff of storytellers and content creators.

“Revival is a passion project that is born from love and pain within this genre”, added Kedhrin Gonzalez, Creative Director at IllFonic. “Revival is insanely innovative and charges against the grain with trends in the MMO genre. It’s not innovative just to be different, it’s innovative because that’s what this genre and gamers need.”

IllFonic is realizing this massive endeavor with the help of the cutting-edge Unreal Engine 4. The studio is leveraging the next-gen features of the Unreal Engine to produce unparalleled visual quality and engaging gameplay in a rapid development cycle.

“IllFonic’s edgy vibe and dedication reminds me how the best game development often happens with a sleeping bag in your office,” said Joe Kreiner, head of Unreal Engine licensing for the Americas. “With their long history of technical excellence and hard core sensibilities, it’s about time we won these guys over to UE4.”

Revival promises an uncompromising vision for the ultimate online RPG experience, offering a world that is always on and always evolving. Every moment not spent in the world of Theleston is one that you’re missing out on, but don’t worry, keeping up with Revival will always be as close as your PC, tablet, or mobile device.