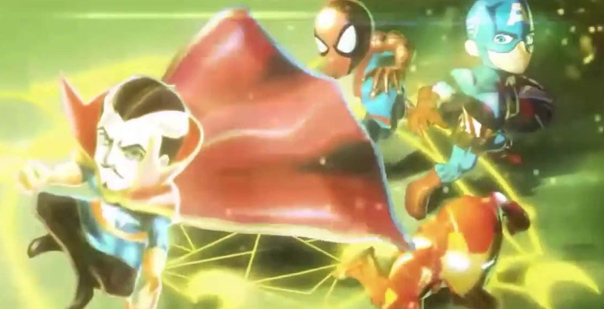 More often than not, we’ve encountered games that entice us purely out of hype. More often so is that it’s because it’s based on fandom we are obsessed with. With that criteria alone, it’s actually quite easy to be disappointed. If a game is mostly banking on the popularity of its source material, then you can bet that there’s nothing much to expect beyond its packaging. Such can be said for Marvel Mighty Heroes.

Marvel Mighty Heroes is a free-to-play real-time team-based tactical cooperative brawler. At first glance, is nothing but a cash cow. Though it does feature an expansive roster from the Marvel universe, it puts a lot of emphasis on characters that appeared in the cinematic lineup.

So then and there, you can tell that this game was made to either promote the movies, or earn a quick buck off the buzz of the upcoming Age of Ultron film. I mean, why else would Gamora of the Guardians of the Galaxy franchise (in her movie appearance) be in your initial party alongside the Hulk and Ironman? The game starts out by pitting the player directly into battle, which serves as a quick tutorial.

Gameplay isn’t actually that complicated, which is good for the mobile platform. The controls are that of any other 3D action mobile game out there. Tapping on a spot on the map moves your character to that location. Tapping on an enemy makes your character automatically target them and attack. The camera is fixed so even with the fully 3D environment, targeting isn’t as awkward as in most 3D mobile action games.

Each character you control also has access to a humble selection of 3 skills unique to that character. Each special has a cool-down period after using them, so it’s more of an automated manual brawling game wherein you time your skills to make the most out of it. You can also swipe the screen to make your character dodge according to the direction you swiped. Though you send out a squad of three members, you only actually get to control one of them at a time, and you can tag between any of them by tapping on their character portraits. 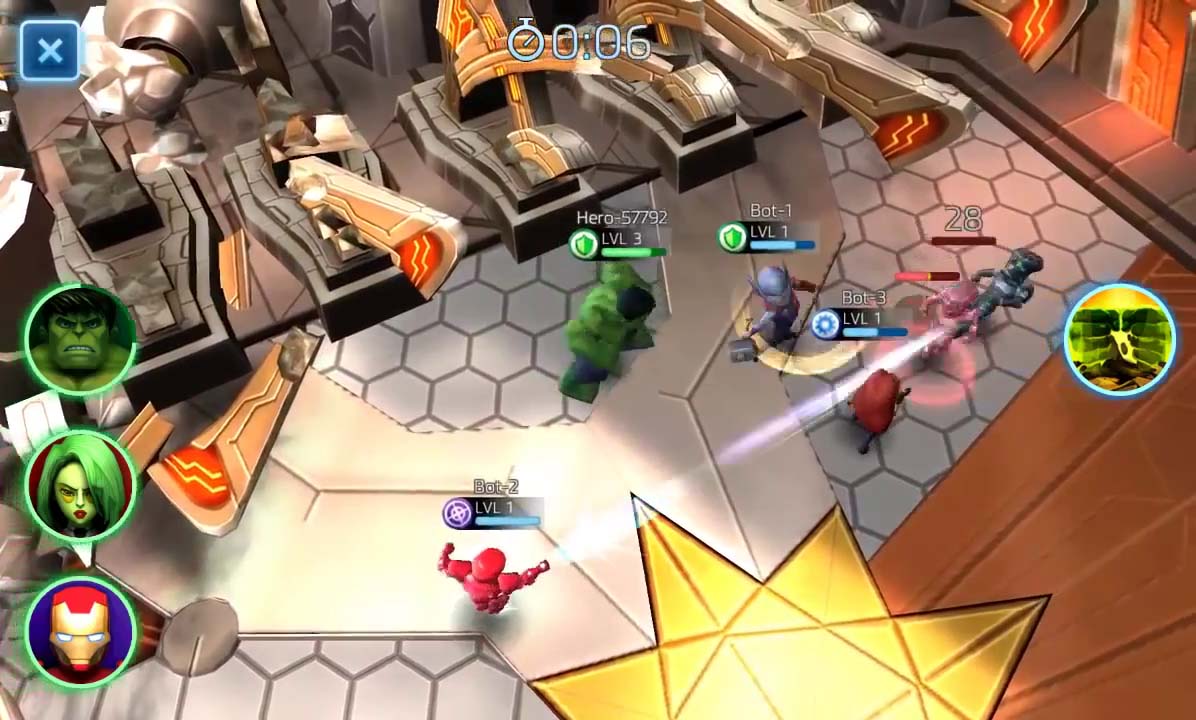 Characters are small but clearly distinct.

This is to make way for the 3 other players (or AI) that join you in real-time combat. So in effect, this actually leaves you with 12 characters available for a single mission at a time, which is a close and faithful reenactment of most Marvel fights, wherein teams face off against hordes of drones and villains.

It would also seem that most Marvel tactical games follow the same strength-weakness system. Characters are classified into different classes: Blasters, Bruisers, Scrappers, Infiltrators, and Tacticians. This classification serves as their “element,” meaning – in a gameplay sense – one type is stronger or weaker in relation to the next. So this puts the basic mobile level of strategic depth into play one would expect.

As I’ve mentioned before, Mighty Heroes appears to only be there to benefit off of the popular cinematic universe. This is evident in that the majority of the characters initially available to you are notable characters in those films, and they appear in their movie costumes as well. And the way they team up together makes no canonical sense. Though this necessarily isn’t a bad thing. Though it is shameless in the developer’s part to bait an audience with buzz hype, it still feeds on and satisfies the fandom as well. Each character’s appearance can be modified as you unlock and equip various other iconic costumes for them. 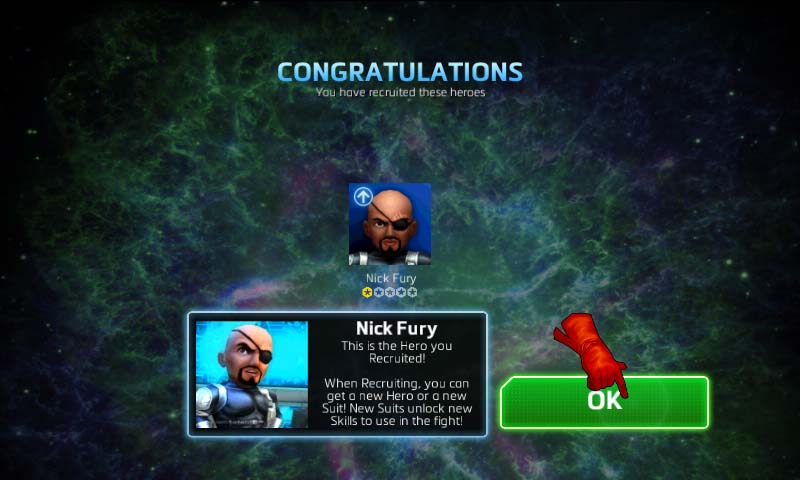 If you're not hardcore in Marvel, most unlockable characters won't interest you.

All models are rendered in a super deformed chibi scale. The detail in each model is very well done that you actually don’t mind them being in minimal ratios. I mean, you’d have to understand that this is still a mobile game, but even with the oddly scaled units, each is clearly notable and identifiable. Though the game boasts a large roster of collectible characters, each character has their own unique idle, walk, and attack animations.

Most of what I’ve said so far is that the concept of the game and the use of its source material is amazing. Somehow this isn’t quite enough to outright WOW people though. The map is actually very small despite how it looks onscreen, which is troublesome when it gets crowded – something that happens quite a lot in a brawler game. The gameplay is so simple that you sometimes just end up mindlessly tapping on the screen to achieve victory. 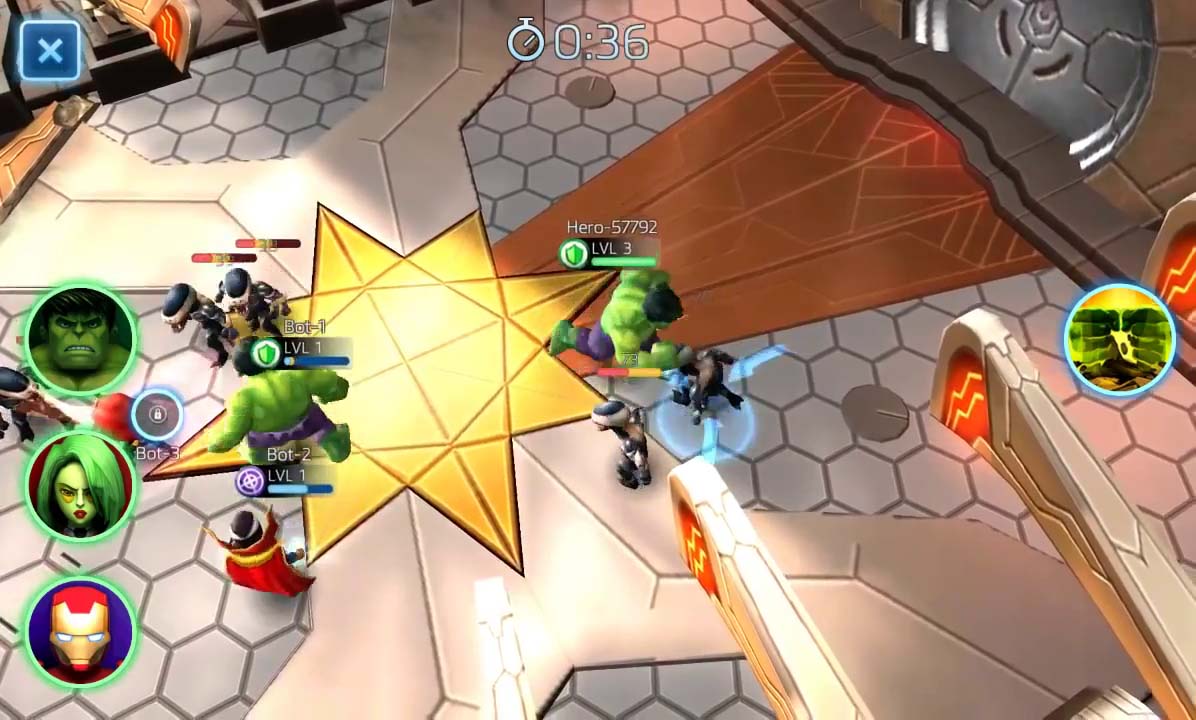 Lulled into a false sense of confidence. Truly dastardly.

This level of ease lulls you to sleep until you hit the boss stages that can be a jarring wakeup call in comparison. Timing of skill use and mastery of positioning now matter. What makes it worse is that you’re not actually motivated or challenged to play the game on any serious level.

Most missions are usually “survive for this amount of time,” “protect this area,” or “defeat all enemies.” And your only real incentives are getting credits to unlock more costumes, skills, and characters. That may be fun at the start when trying to build your epic roster of choice characters, but with no real plotline and shallow gameplay, the novelty of it all is bound to get old sooner or later depending on your level of fandom.

This is supposedly balanced out by the social nature of the game, but right now, no one’s actually playing. I had only played for a few days initially before dropping it for a week. After returning, I was still ranked 45 in the leaderboards. I guess most of the cons I’m saying right now is because Marvel Mighty Heroes is still in its soft launch.

Most features are understandably still in development, and the community has yet to catch on, so whatever the game lacks now shouldn’t be an indictment of how the game really is.

But as of now, Marvel Mighty Heroes feels a little lifeless and strictly just flavor of the week. If you’re a hardcore Marvel fan, you may want to keep it since collecting the characters and costumes is still fan service after all. But if not, then best wait for a full release.