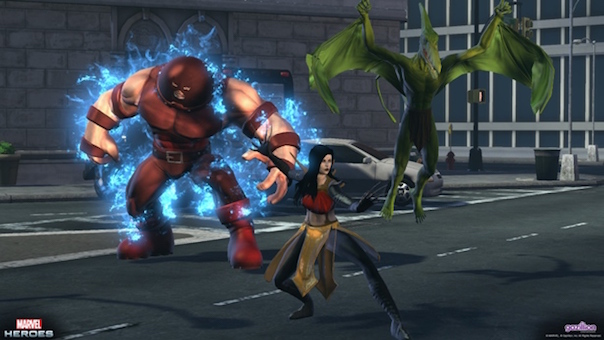 How do you troll a bunch of Marvel Heroes developers? Tell them your favorite superhero is Superman. This was how the Press Preview of what is coming up in Marvel Heroes started. I answered the question honestly, I am a long time fan of Superman. But even if he wasn’t I would have said him simply because they said “no Batman.” But you aren’t here for my amusing dev stories! You’re here to find out what is coming up in Marvel Heroes. Before we can get there we’re going to talk a bit about what has recently come out, including a surprise and what has been announced. So let’s jump right in! 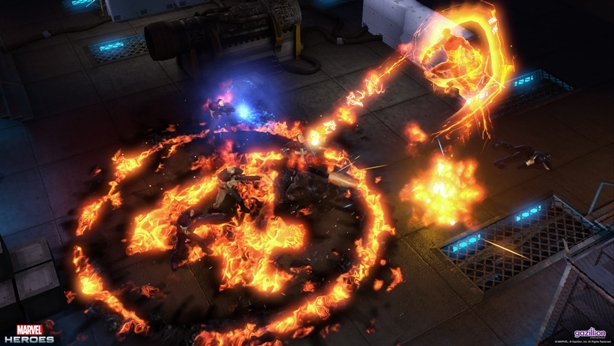 Johnny Storm, aka Human Torch is now available in Marvel Heroes. He flies, he shoots fire, and he looks awesome doing it. But getting him looking so awesome wasn’t easy. Marvel Heroes is known for having alternate costumes, so the development team had a bit of a problem on their hands. How do you make costumes for a man who is always a ball of fire? After a bit of time debating and experimenting the team came up with technology which would allow the costume to be seen through the flames while still leaving the Human Torch burning bright. And thanks to Gazillion 5 lucky readers will be walking away with the Human Torch Hero Pack.

Out with the old, in with the new. Have you ever felt like when it came to loot drops you have the worst luck in the world? Well you need worry no longer. Now you will be able to earn Eternity Splinters through playing which, when collected can go towards heroes, and more. Which means after about 20 hours of solid gameplay you should be able to purchase the hero of your choice instead of relying on the luck gods to look your way.

So now that we’ve talked about a couple of things already revealed, we’re finally at the juicy stuff. The reveals.

Though there has been some mention here and there of the desire for difficulty modes to be brought in since launch there hasn’t been anything concrete, until now! Heroic and Superheroic difficulty modes are incoming. Going with a higher difficulty will mean new ambushes you won’t be expecting and unique enemies you wouldn’t otherwise see. And these unique enemies will have unique bosses who will have unique powers. UNIQUE!

And if that uniquely unique uniqueness wasn’t enough! (Sorry, I’ll stop now) You can go kick some ass in PvP. This is something that the team has been working on since launch and they hope to have up on the test server in a little bit over a week. Two teams of five will go head to head using existing powers, existing gear to defend their base while beating eachother into a bloody pulp.

The first hour of Marvel Heroes is getting a bit of a revamp. By which I mean it will be a completely new experience. Oh, don’t worry about your favorite content from that first hour, most of it will still be available just in a slightly different way. The new zone will have you in action in less than five minutes and allow you to work with friends a colleagues to kick thugs in the face.

Emma Frost mind controlling a T-Rex. Yes, you read that correctly! Emma Frost will be able to mind control a T-Rex. She has a unique mind control ability which will allow her to summon people she mind controls as a pet. And if that isn’t cool enough for you she also has some other interesting mental abilities. And yes, diamond form.

Three new item types will be stirring up a storm very soon. Relics, Uniques, and Superteam items. Relic will be stackable items which give awesome bonuses and advantages. In one example there was a stack of 1,000 which gave an ever increasing crit chance though it does have diminishing returns. Uniques like Wolverine’s Leather Jacket, and the Daddy Deadpool Device will be brought in. Each unique will have…you guessed it, unique abilities. You won’t find a list of these items on any Marvel Heroes page though. The dev team wants the players to uncover them on their own.

The X Mansion is under attack and only you and your friends can save the mansion! In this neverending scenario the X mansion comes under attack from wave after wave of bad guys. Beat them up to move on to the next wave. The longer you play the better your rewards, and the harder the enemies get.

One last thing that didn’t fit in anywhere else, it has been said that in the future players will be able to play some characters which are NPCs already in the game. All of this is really just scratching the surface of what is to come. There is so much more planned for the rest of 2013 I could write a novel about it. Instead, I’ll leave you to process the awesome that just came and thank both Jeff Donais and David Brevik for taking the time to show us around.

Don’t worry! I didn’t forget about those Human Torch Hero Packs. Head on over to the forums by following this link to find out how to win. Good luck and stay safe hero.