Hand of the Gods: SMITE Tactics Interview with Austin Gallman 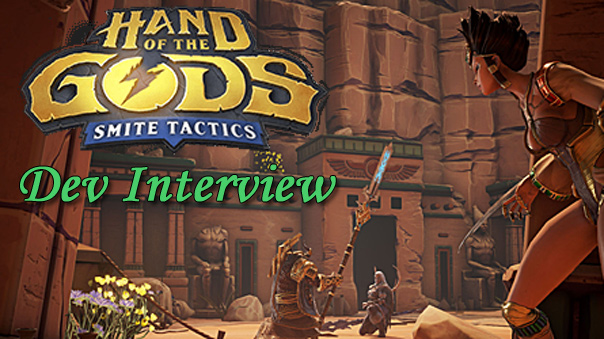 Hand of the Gods, formerly Smite Tactics, is a card+board game hybrid by Hirez Studios. It features the world of Gods they’ve already crafted, lovingly from actual mythos. A week or so ago, I contacted Hirez Studios to get a word in with them about Hand of the Gods, because I love card games, and wanted to hear some opinions and thoughts on the game itself. I wound up, with thanks to Hirez Adanas, talking to Austin Gallman, one of the devs of the game. With the production halt of Smite Rivals, I’m hoping that funding/time went instead into this game instead. It shows that they are putting a lot of hard work in, and the pantheons grow more and more, each with their specific style of gameplay! Maybe this interview will help enlighten people who are either new to the game, or stuck in a rut trying to figure out where they want to go in the game, in regards to their playstyle/decks. 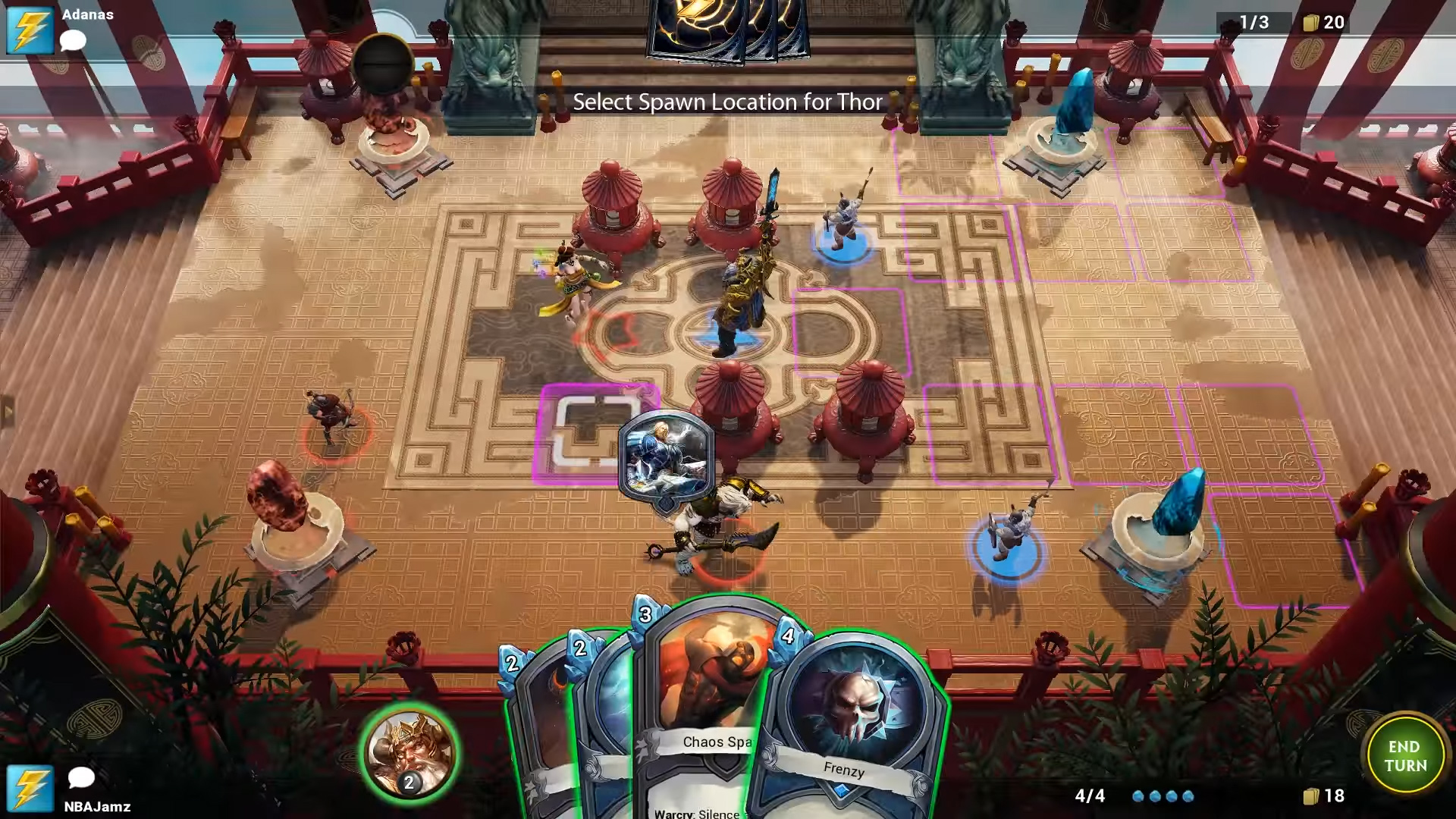 OnRPG: Hand of the Gods: Smite Tactics is definitely not a special card game. There aren’t many quite like it. It can seem daunting to get into! After all, you have to pick a God, build a deck, and learn about the chess-style gameplay. Any advice for someone who is simply new to the style of game, but wants in?

Austin: The best advice I can give to new players is to learn some of the core mechanics that differentiate us from others in the same genre. Movement and understanding how return damage works is crucial to your success in Hand of the Gods! We are still in Closed Beta though, and a majority of the scope of our development has been experimenting with different game modes, getting the amount of content in the game to a good state, and polishing the systems that are already in place before Open Beta. We do have plans to implement features that help new players have an easier time understanding the game, including an encyclopedia of some sort to break down each mechanic of the game and how they interact without having to look online!

OnRPG: One of the more challenging things [to me] is focusing on such a small deck size, similar to Hearthstone. Personally, I’m more of a Magic: the Gathering player. Have there been any thoughts of increasing the deck size?

Austin: The game actually started with 20 Card Decks and expanded to 25 as we added additional cards to the game a couple months ago. As additional Pantheons, mechanics, and styles of play are introduced to the game we plan to reevaluate deck size. That doesn’t mean we will increase it, but the smaller deck size was needed in early development and something that the design team is keeping a close eye on. 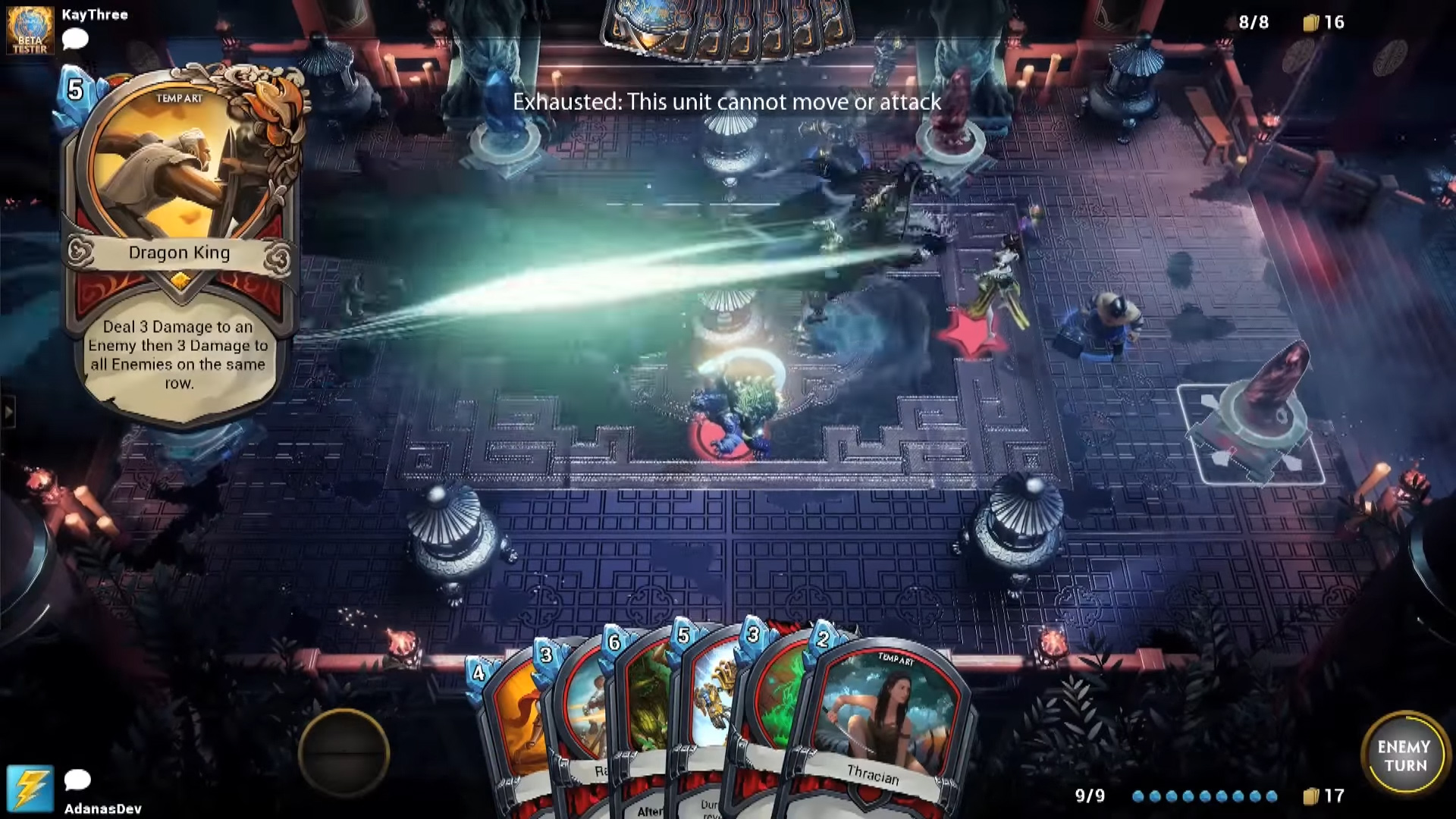 OnRPG: Each faction has their own playstyle and way to build/tackle victory. Do you have a particular style that suits you?

Austin: I’ve always been more of a control player when it comes to card games. Aggro can be fast and fun, but it always feels more satisfying to me when I’ve been able to slow down my opponent’s pace and grind out the win in a drawn out game. Book of the Dead is my absolute favorite card in Hand of the Gods right now, which fits incredibly well into my Egyptian Ra play style. Trade efficiently with your spells, and then resurrect 3 gods late into the game :D

OnRPG: Speaking of alternate playstyles, each board has its own special features or challenges. Have there been talks of alternate methods of victory? Such as in MTG where creatures that stay out for X turns equals victory, et cetera.

Austin: Alternative win conditions are certainly a possibility in the future but for now we are focused on having a single clear way to win a match. Once the card pool expands over time, that would be when we would look to get creative with different ways you could go about winning a game. 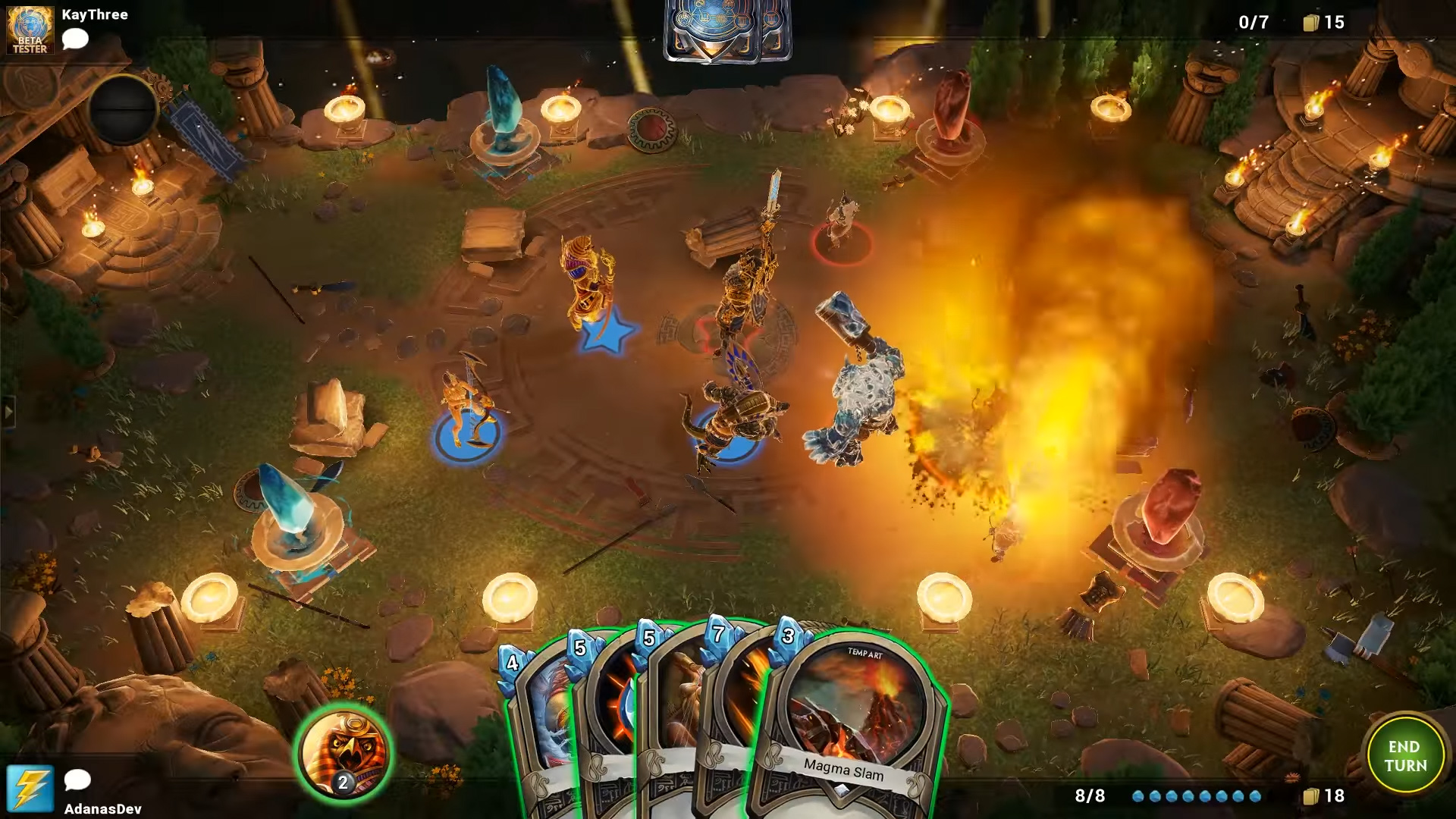 OnRPG: As of right now, it’s a 1v1 tactical board game. Have there been any talks of 2v2 modes or anything crazy like that? Something like a player plays the cards, and a player moves the pieces?

Austin: There have definitely been talks! The game has gone through numerous core gameplay updates to nail our primary mode down, but we’re always looking to push the boundaries of any game we make. We do not have anything to announce now, but Hi-Rez games have always found playing with your friends to be more fun.

Austin: We love doing cross-promotional content between our games so this is a definitely something we would look to do if a good opportunity arises. 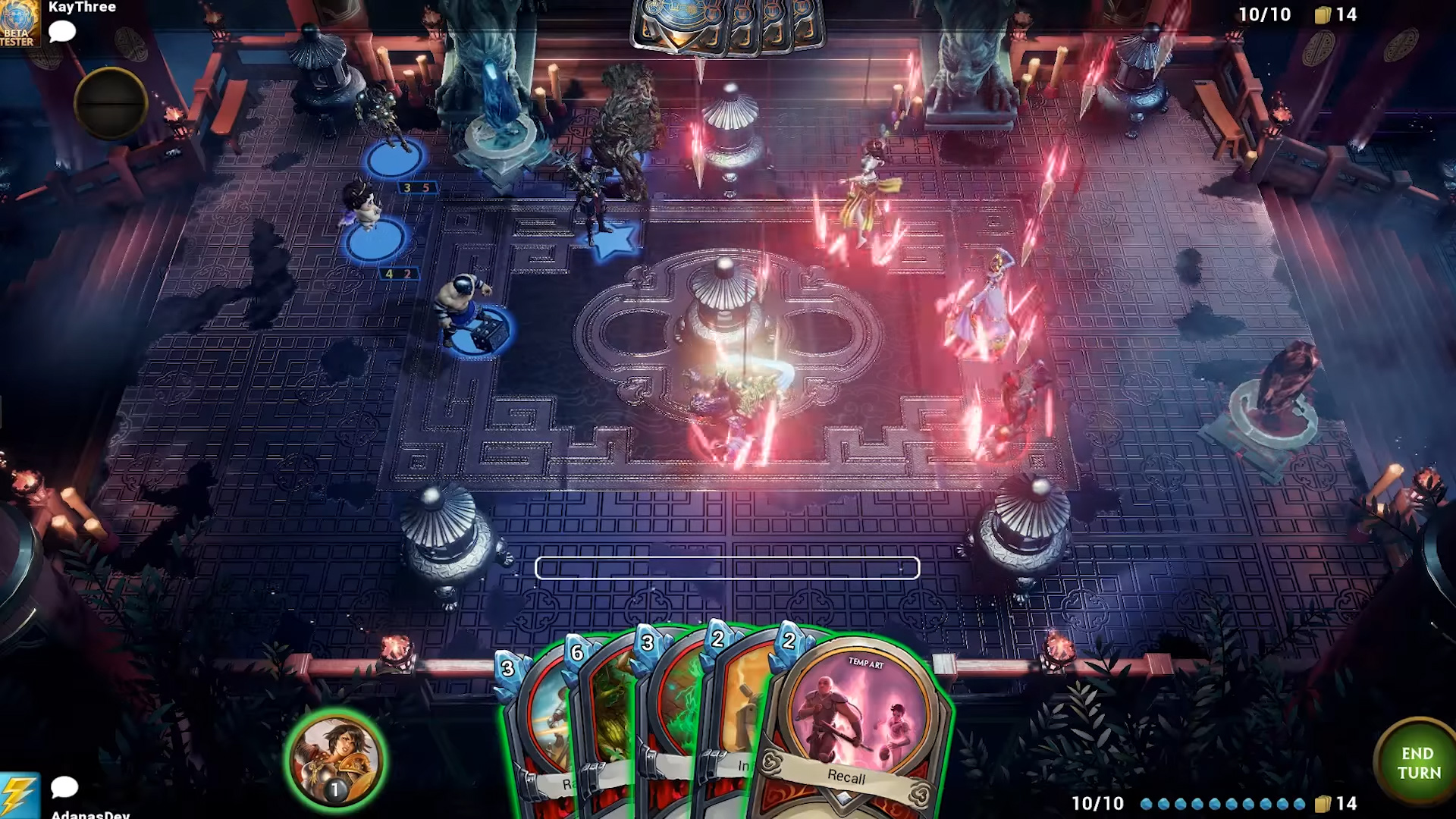 Austin: It’s awesome to see Esports Organizations already finding interest in Hand of the Gods while only in Closed Beta. I think most have recognized that Hi-Rez as a company loves supporting the competitive side of our games and do a lot to work closely with our players to make the best scene possible. HRX is a little far away, but we have some amazing plans for Dreamhack Valencia in July! We are going to be qualifying two players in June to be flown out and compete on our Esports Stage in a 4-Man Bracket. The other two players will qualify through an Open Bracket tournament, where anyone in attendance at the event will be able to signup and compete.

OnRPG: Any final tips or thoughts on deckbuilding, or approaches to the game in general?

Austin: Play the way you want! The game doesn’t always have to be about the best ‘meta’ decks or copying the top players. Find a style that suits how you like to play card games, and go from there. 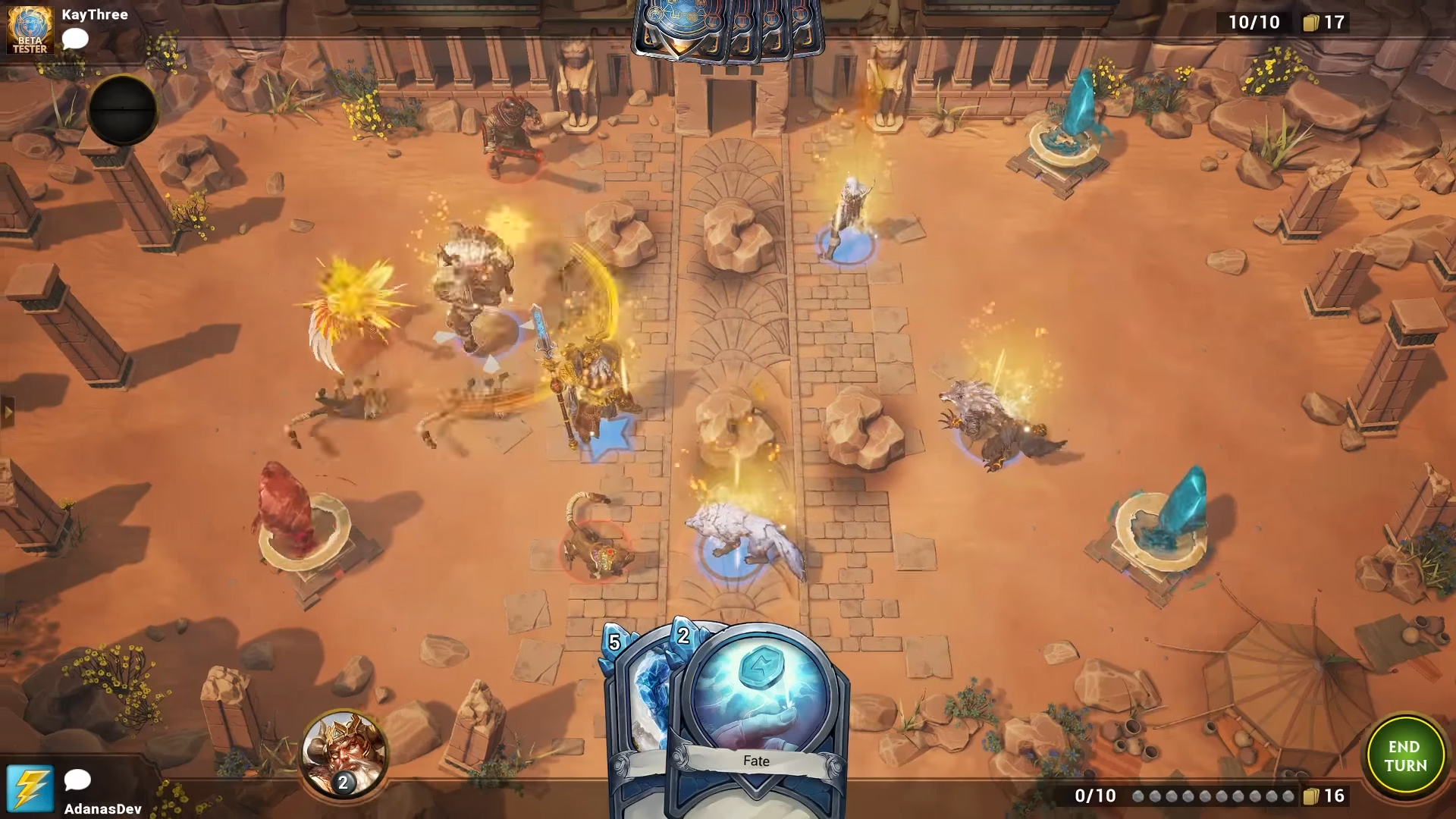 Want to learn more about Hand of the Gods: Smite Tactics? Check out our first look video here!