Heroes of the Storm Cho’gall and Towers of Doom Review 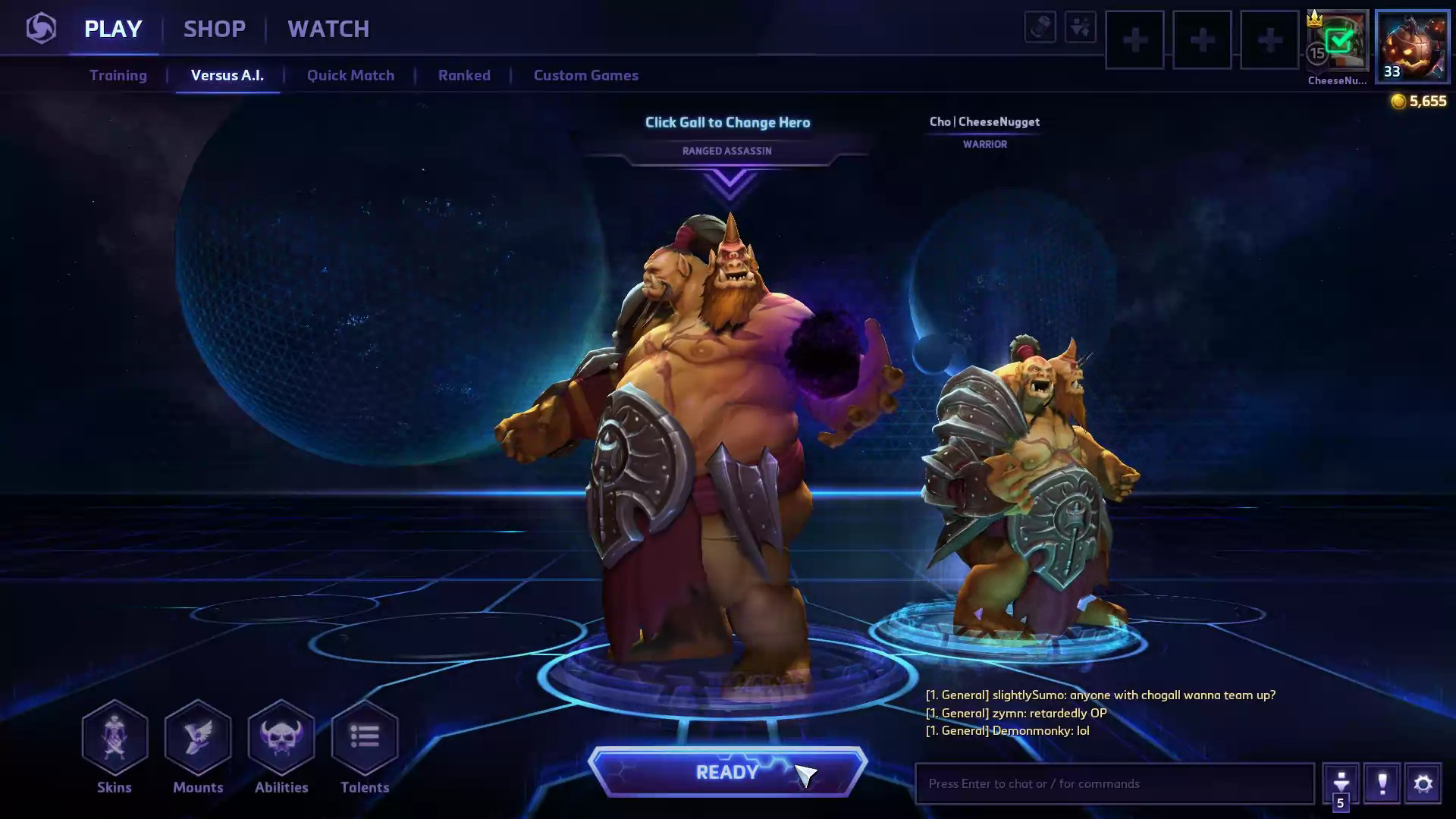 Anyone that knows me or has read some of my past articles knows that I love playing ARTS/MOBA games. For a player coming from Dota 2, Heroes of the Storm can seem very simplified and missing many features. However, what keeps me coming back for more is that Heroes of the Storm does not try to be like Dota. Instead, Blizzard has continuously offered players a new way to play this genre, it is not just the usual farm, build items, team fight, and push you find in other games. HoTS always has something interesting to offer in its action packed games. The latest update once again shows Blizzard’s creativity and desire to set itself apart from other games in this genre. Read on to learn more about the latest addition to Heroes of the Storm roster, Cho’Gall, and the latest battleground, Towers of Doom.

Cho’Gall is a two-headed ogre trained in the arts of the arcane by the warlock Gul’dan. He is an Initiate of the Fifth Circle of the Shadow Council and Chieftain of the Twilight’s Hammer clan. He is the first of the ogre magi. Cho’Gall is made up of two personalities sharing the same body: Gall is a cunning master of dark magics and Cho is a powerful warrior. If both Cho and Gall can work well together, he (they?) can be quite an intimidating opponent.

Being a two headed ogre, it would only be natural for Cho’Gall to be played by two players, right? Well, I certainly did not expect this mechanic to be implemented into HoTS but Blizzard is always surprising us with their creativity. In order to play Cho’Gall, you will need another player to control the other half. Cho is in charge of moving while Gall only has to worry about landing his spells. As crazy as this sounds, it works quite well if you are playing using some sort of voice communication.

Cho is a warrior that can charge into battle and take quite a beating. He has a lot of health points as he shares it with Gall, his other half. Cho’s first ability, Surging First, can be used to charge at enemies, damaging and knocking them aside. This ability is not very strong in terms of damage but it is great to close the gap or get away. His second ability, Consuming Blaze, ignites nearby enemies dealing heavy damage over 4 seconds. This ability is also useful to heal up as if you hit an enemy you regenerate a large amount of health over 4 seconds. His third ability, Rune Bomb, rolls a bomb dealing heavy damage to enemies in its path. This ability only works well if Gall is paying attention and detonates the bomb on time.

Finally, for those that are unfamiliar with HoTS, Cho can choose between two different heroic abilities (ultimate): Hammer of Twilight or Upheaval. Hammer of Twilight improves Cho’s attack damage and also adds an additional active which deals massive damage, pushes enemies away, and stuns – all on a very short cooldown. On the other hand, Upheaval is a more team oriented ability as it pulls enemies towards you, slowing them and dealing moderate damage.

I personally prefer Upheaval over Hammer of Twilight in most scenarios as I tend to play with a group and this ability is great with a well-coordinated team. It can be used to deal massive area of effect damage to clumped up enemies after pulling them in, pull enemies that are trying to escape, or simply peel off enemies from the group. However, if you are not playing with a group or are playing with a team that does not work well together, Hammer of Twilight may be the obvious choice.

Cho’Gall can be brought down quickly if focused on

Contrasting from Cho’s massive health pool and toughness, Gall is a spell caster. Unlike other spell casters, he does not have to worry about his health pool as it is shared with Cho. Instead, Gall only worries about landing his spells and coordinating well with Cho. His first ability, Shadow Flame, deals heavy damage to enemies in the area and his second ability, Dread Orb, throws a bomb that bounces three times dealing heavy damage to enemies. Both of these abilities can be spammed during the laning phase to harass enemies or push the wave. His third ability, Runic Blast, cannot be used unless Cho tosses his bomb. Runic Blast will detonate Cho’s Rune Bomb dealing massive damage around it.

His first ultimate ability, Twisting Nether, slows nearby enemies and can be activated again to deal massive damage. This ability, like Cho’s Upheaval, is great if your team works well together. If not, then Shadow Bolt Volley may be a better choice as it unleashes 20 Shadow Bolts dealing heavy damage to a single enemy.

If Cho and Gall are in sync, Cho’Gall can be very strong. However, he can easily be one of the worst heroes in the game if both players are not working together. He is a very rewarding hero if you play well but on the other hand, dying as Cho’Gall means your team is down two players. A lot of spells that take enemies out of the fight for some time work twice as well on Cho’Gall as you get to remove two heroes for the price of one.

When you are playing as Cho or Gall, it is important to never become scared and run from fights. You can take on two enemies at once and easily run over a single hero. However, make sure that both players are on the same page. Are we running, engaging, or chasing? If you both are on the same page, you can use your abilities in sync to deal massive damage or escape.

For those playing against Cho’Gall, his large health pool makes him an easy target for % health damaging abilities. This makes heroes that possess the Giant Killer talent especially strong against Cho’Gall. Do not attempt to fight Cho’Gall alone, remember that you are going up against two heroes, not one. Instead, group up and approach Cho’Gall as if he is a raid boss. With this mindset, Cho’Gall can be taken down and you won’t be running around screaming ‘OP OP OP’ (overpowered).

Cho’Gall was a great addition to the Heroes of the Storm roster with his unique playstyle and fun mechanics. If this wasn’t enough, Blizzard also included a new battleground, Towers of Doom, in the latest patch. On this battleground, the objectives are mandatory and cannot be ignored in some circumstances like on other maps. Instead of clearing waves and destroying the enemy base, you must capture the map objectives to deal damage to the enemy core.

When playing on Towers of Doom, both enemy cores start with 40 hit points. When you capture an altar, the enemy core is barraged with attacks from your forts. Both teams start off with 3 forts on this unique tug-of-war style battleground; you can lose or gain more forts by destroying them. The more forts you have, the more damage you can deal when capturing altars.

Once again, Blizzard is changing up how we play ARTS/MOBA games. At first they got rid of farming and item building, but with Towers of Doom, even the method of winning a game has changed. While this is a nice concept, I am personally not a huge fan of this map. Firstly, it does not fit my playstyle as I love pushing and farming. Once we get past that personal preference, Towers of Doom still feels quite unbalanced when compared to other maps. It is described as a tug-of-war style battleground but it honestly feels like if you let your rope get pulled too far, you can never get it back. All of the other battlegrounds, and HoTS in general, is great when it comes to comebacks. You never really lose the game until your core has been destroyed. However on Towers of Doom, it can be very difficult to come back if you are behind and have lost your forts.

This may be a good or bad design decision depending on the player. I personally love comebacks and never knowing when the game is over. I’m not saying that comebacks are impossible on Towers of Doom, they are just a lot more uncommon. This may change in the future as we all become more familiar with the battleground. The ARTS/MOBA genre is amazing because it is always evolving.

Forts on Towers of Doom can be recaptured

Conclusion: Blizzard continues to set HoTS apart from the competition

I was very pleased with the latest HoTS patch. Blizzard continues to set Heroes of the Storm apart from other games in the genre. It does not try to be the next Dota but instead takes the general play style of Dota, couples it with the creative minds at Blizzard, and creates a unique and fun game. I never expected a hero such as Cho’Gall to be released in any game; it seems crazy to have a hero controlled by two players in a serious setting but Blizzard pulled it off. I just wish there was some sort of in game voice chat to coordinate with other Cho’Gall players. For now it seems like you will have to resort to using third party options when playing with friends and usually avoid Cho’Gall when playing with random players.

Normally I would expect to pull out my wallet and spend some money unlocking the latest hero but with Cho’Gall it is different. Attendees of the latest Blizzcon have received Cho’Gall for free and winning two games with someone that already has Cho’Gall will unlock the hero for you. At first I thought I would have a hard time getting Cho’Gall, but with Blizzard rewarding players that help others unlock Cho’Gall, you can quickly find someone willing to help you unlock Cho’Gall. (Hint: Even wins against bots count towards unlocking Cho’Gall!). I would hurry and unlock Cho’Gall for free while you can, this event only lasts until January 1st, after which Cho’Gall will need to be purchased just like a regular hero.