Enforcers: The Unsung Heroes of PAX 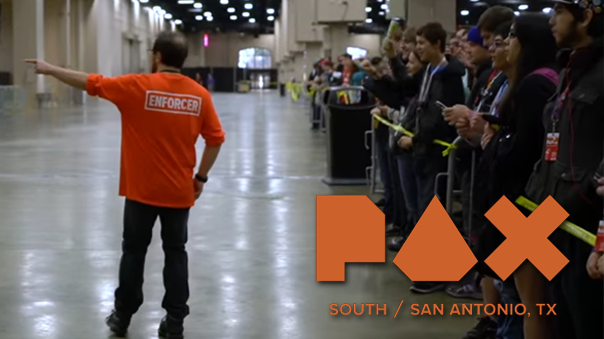 The Penny Arcade Expo is an exceptionally intricate machine focused on fan engagement and is held all over the world, but it couldn’t be done without the Enforcers. Participating on the panel are a few veterans of the scene with varying amount of years of experience under their belt including Trin, Carla, Andrew, and Chief Enforcer Kristin.

First off, what’s an Enforcer?

Kristin – Enforcers are the show’s staff, anything that needs to be done within the event is handled by the hand-picked crew; this includes customer service across the board like providing direct assistance on the show floor to helping manage the numerous panels, tournaments, and other activities.

What was your first impression of an Enforcer?

Trin – I admired the Enforcers because they had confidence while I had anxiety. I asked myself, “How can I do that?”

Carla – As the unobtainable elite. I took a long shot on an application and was invited to join the crew. I’ve been hooked ever since.

Andrew – I loved the comic. The comic is awesome, PAX is awesome, and as someone who reached the glass ceiling of what I could do as far as community interaction went I wanted more.

Kristin – I wanted to work with people that were a cut above the staff of other conventions like E3. It was difficult to build up the show from the ground floor with no experience, but it was worth it to have a fantastic community of helpers in the end. Our Enforcers also help out at other events like Child’s Play.

What makes you come back year after year?

Trin – I love being on the other side of game development. The fan expos are the best part of the industry and the Enforcer community is amazing.

Carla – I’ve worked with and have been disappointed by other shows and their staff, they just weren’t as friendly and couldn’t match the PAX/Enforcer energy.

Andrew – Because of the Enforcers. I have a lot of good friends here and will probably never retire.

Kristin – It’s my job! But more seriously I think of the Enforcers as my children.

How do you balance between professionalism and passion?

Trin – Enforcers cosplay all the time, I love the creativity, but I make sure to work hard to be there for the attendees. The fans come first, enthusiasm second.

Carla – Tone it down when necessary. I was assigned to help out a band I loved, but stayed professional regardless.

Andrew – Be passionate, but remind yourself when it’s appropriate and when it’s not. As far as cosplay goes, it’s welcomed with open arms – just make sure people know you’re an enforcer.

(Everyone points and laughs at a cardboard cutout of Shawn, an enforcer at the show.)

Kristin – Enforcer lore and stories. Lots of connections all the time about any number of things. Also, Shawn! There’s a Man of the Month calendar, but each month is Shawn, buttons of Shawn, but each day they get bigger, and there’s also a cardboard cutout of Shawn which we carry around. The goal is to embarrass him as much as possible. Lovingly of course.

Carla – Regional culture and recognizing each other by their handles instead of their real names.

What’s a specific PAX moment that you cherish?

Trin – When the enforcer community came together in a time of hardship.

Kristin – My oldest child has a learning disability and he had a stuffed guinea pig that helped him cope, but it was unfortunately lost on a trip to Disney World. It devastated him, especially since we couldn’t find another. No amount of searching or calling everyone and anyone involved with the production of the stuffed animal could help. I had lost all hope until I was reminded I had an army of helpers. With the assistance of the Enforcers I was able to get the guinea pig back to my son. When I needed help, the Enforcers were there.

Andrew – A guy at the convention had gotten all the scavenger hunt codes, but couldn’t get the shirt for whatever reason and was pretty distraught. It took 5 minutes to talk to him, get the shirt, and come back; it totally made his day and will probably be something he’ll never forget. It’s the little actions that change someone’s life for the better.

Advice on becoming an Enforcer and for incoming ones?

Carla – Don’t be afraid of being overwhelmed. It’s not a competition of who’s played the most games or who’s been to the most PAXs.

Trin – It’s okay to have knowledge shortcomings. You’re not a soldier, you can’t do everything everywhere, play your part and support each other.

Kristin – Human resource stuff like grabbing badges and shirts then reporting to your assigned department. After your 6 or so hour shift you can do anything you want.

Requirements to be an Enforcer?

Kristin – It varies, be alive, employable in the US, 18 years or older, take it seriously, be able to handle the customer service part, and be passionate. You don’t even have to be a gamer.

Kristin – Mostly learning on the job with straightforward tasks and instructions. High profile assignments watch webinars to learn the product and job expectations. However, we’re currently working on mentorship and streamlined training.

What would a PAX be like without Enforcers? Let’s hope we never have to find out.