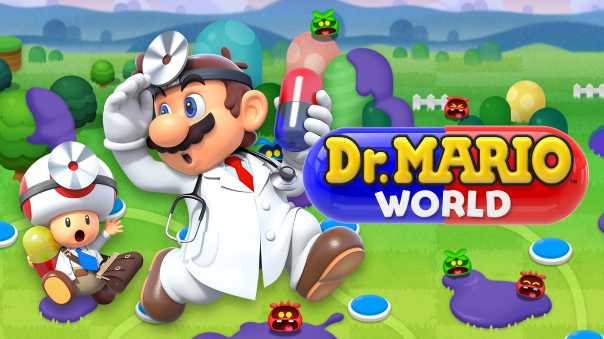 The original Dr. Mario game came out when I was eleven years old. It was one of the later games of the original Nintendo Entertainment System, which was succeeded by the Super NES later that same year (1990). As such, the graphics were great for its time, and it had a catchy little earworm of a song that played in the background as you attempted to match three like colors in any combination of pills and viruses. Match a red virus with two red pill halves? BOOM, dead viruses. Two blue viruses and a blue half pill? Just as good! Each pill had two colors of a possible three, red, blue, and yellow. It was all very primary.

Dr. Mario World, for Android and iOS mobile devices, follows largely the same formula. There are colored pill capsules and colored viruses. Match three or more and the matched colors disappear. There are no end of differences in how the game plays, however. In the original Dr. Mario game, pills dropped from the top of the playing field, which I always thought looked like a pill bottle, and proceeded downward.

For whatever reason, Dr. Mario World has the pill capsules moving upward from the bottom of the screen. DMW also has, as far as I can tell, five total colors: the three primary colors from the original game, plus purple and green. There might have been an orange too, but I don’t recall seeing one for sure.

You can also hold your finger on a capsule, or a broken capsule portion if one is left behind after making a match, and drag it where you want it to go. You can only move up, however; moving toward the bottom of the screen doesn’t seem to be allowed. The ability to control the capsule fragments is unique to Dr. Mario World, and was not a feature of the original game.

Another difference between DMW and the NES game is that you progress through various campaign puzzles. Depending on how well you score, you can rank from one to three stars for completing each level. This is a basic “Candy Crush” formula, and it would not be inaccurate to say that Dr. Mario World is essentially “Dr. Mario and Candy Crush having an illegitimate and ultimately ugly love child.”

The first twenty or so missions of the campaign are fairly basic, with the first being rudimentary tutorials about the various features and gameplay of Dr. Mario World. The tutorial will cover things like making matches, control and rotating pills, and the usage of the special abilities of each of the doctors you can select. Initially, there are three doctors you can choose from: Dr. Peach, Dr. Bowser, and Dr. Mario. Each has a special ability they can use after making a certain number of matches in a round. This ability will destroy rows or columns of viruses, depending on who you choose.

Each doctor can also “equip” up to three assistants. Assistants each have their own traits, such as earning more score, granting additional capsules to a round, requiring less matches before you may trigger your special ability, et cetera. The game gives you one free assistant, and additional assistants may be purchased at a rate of 4000 coins, or for the game’s premium currency, diamonds.

The monetization of Dr. Mario World is hardly the harshest I’ve seen, but it’s up there, and it has a large number of predatory monetization practices. As it’s a free to play mobile game, this shouldn’t really come as any great surprise to anyone I suspect. All the same, I wasn’t a huge fan of how heavily this game pushes you towards microtransactions. The levels after 20 become easy enough to pass, but getting three stars can be challenging. Unless, of course, you want to spend real money for the handy dandy “score boost” consumable item.

The campaign mode I mentioned earlier isn’t the only mode the game has. Branching off the campaign, you will periodically find challenge missions. Unlike regular campaign missions, which are limited by the number of capsules you can play, challenge missions are instead time gated. Reaching three stars for these missions requires finishing within a certain time, as leftover time will grant you score. Completing a set of challenge missions can result in a reward, but I never actually managed to complete a set, as they’re stinking hard, so I don’t know what that reward might be.

There is also a versus mode. To be honest, I was never entirely sure what was going on with versus mode, other than the fact that suddenly I’d get slammed with a bunch of extra viruses, and it would be game over. This happened several times, and I just decided I didn’t want to be bothered with versus mode any more. Sure, I could have devoted time to “git gud” but losing isn’t fun.

And that right there is the crux of the matter. Not only is losing not fun, but most Candy Crush clones, aka Match Three puzzlers, tend to have losing built into their very structure. It’s how they make money. Dr. Mario World just designs the levels in such a fashion that you’re going to lose early and often. They seemed to fail to realize that you have to have enough enjoyable levels to keep people coming back, and that if you burn them out within the first 30 or 40 levels, they’re just going to walk away and not come back.

Frankly, I’m getting tired of nostalgia driven cash grabs, and ultimately that really is what Dr. Mario World boils down to. There’s nothing innovative or keen about it. This has become a habit of Nintendo’s small fleet of mobile games. It’s not surprising, but it is disheartening, considering the quality of what the Switch is doing, that Nintendo mobile would just put out so much rubbish. Whoever is heading the department should be sacked.

Dr. Mario World gets 2 out of 5 pills. It’ll take more than just a spoonful of sugar to make this medicine go down.