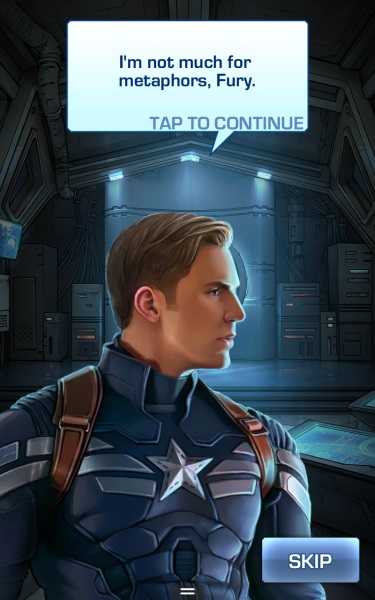 Ever since the release of The Avengers in 2012, the world has fallen madly in love with the Marvel universe. These iconic heroes have once again become part of our everyday language and culture, and it’s no surprise after the Captain America: The Winter Soldier release this March, a video game was ready to go, named directly after the film with ‘The Official Game’ tacked on the end. Published by Gameloft, the game has two missions available for free trial; the remainder of the game must be purchased.

Not a Perfect Soldier, But –

On the surface, CA:TWS is a tactical RPG. You control the main hero, Captain America, and may add a few recruited S.H.I.E.L.D. agents from four roles to your party to assist on each mission. An additional ‘role,’ Avengers, is also available, but only for cash credits. Missions are short, isometric excursions designed to only take a few minutes, letting you lead your team to victory (and earn bonuses for finding a hidden suitcase and completing special objectives). The storyline of The Winter Soldier unfolds with each mission, staying closely tied to the movie’s direct plot, and the graphics have been designed to offer an almost 3D comic-book feel. 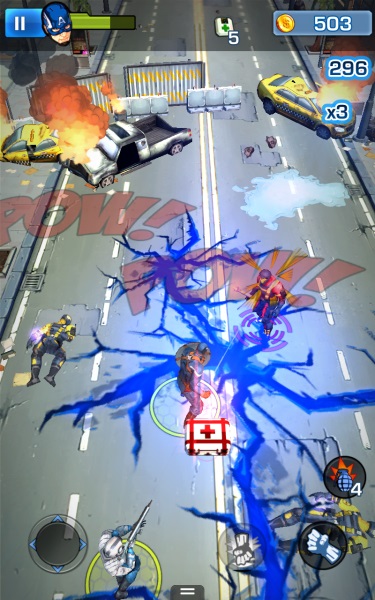 Every character has their own experience, stats, and progression, and while you’re stuck with just one Captain America, you can recruit different agents to get an ideal combination of stats for your party building plans. You can research additional stats for a specific role, and you can equip characters with special shards of ISO-8 that offer additional, specific stat boosts. ISO-8 can also be upgraded or crafted into new combinations to let you specialize Captain America or your agents to their peak performance. 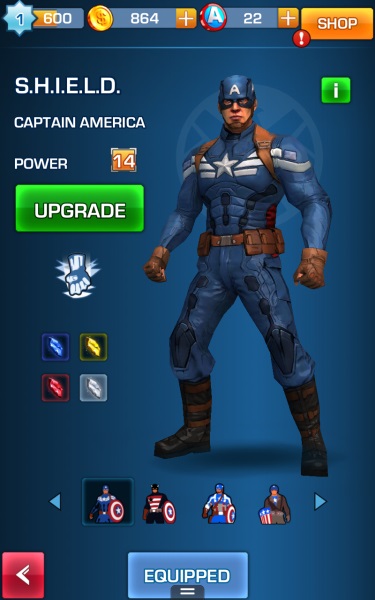 There is no equipment, but each agent role has its own unique ability. These abilities may be performed at any time during combat, but are limited to the number of role-specific items that you own, so stocking up becomes important if you want to fully utilize your team’s tactics. In addition, as you complete missions, new suits for Captain America will unlock. These new suits offer new abilities for the Captain to use and leave you with an element of strategy in determining which suit you’ll wear to battle. 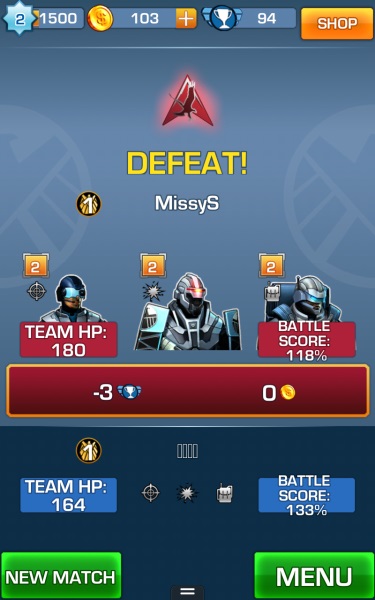 Finally, there are some multiplayer components: A.R.E.N.A. and Squads. A.R.E.N.A. pits your choice of three agents against an enemy opponent, in an automated, quick results battle. There is zero real time combat here: it’s simply select your agents, accept the fight, and then check the results to see if you win or lose. Squads, on the other hand, are like MMO guilds: join and have a network of players to chat with, assist, and embark on special missions. Unfortunately, I was unable to get any experience in the latter, as there were no squads on the list to join. The expense of creating a squad is one of many expenses that become problematic (as discussed later on).

At first glance, and through the first two missions offered through the game’s free trial, CA:TWS seems like a great mobile approach to combining Captain America and tactical combat. Once I started getting just a little further in the game, I was hit with a wall of annoyances built by poor game design. 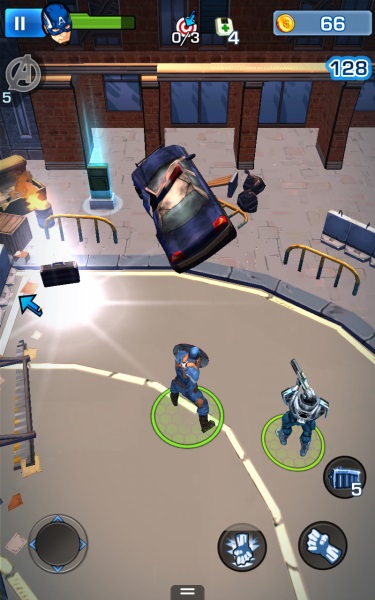 The most insurmountable problem in CA:TWS is its camera angle. Like many tactical RPGs, the game plays in a top-down, 2.5D mode, and relies on an auto-following camera to help direct the action. Mission maps, however, are filled with corridors that take sharp turns and enemies that can retreat, and the game’s automatic camera is limited as if stuck on a one-way rail. Because no camera control is offered to the player, it’s incredibly difficult to look ahead around the corner to prepare for the enemies in wait; it’s even harder to find an enemy that’s attacking you from behind. By the sixth mission, I was already nearly failing because gunmen were lurking in the hall I’d just come from and directing the Captain back that alley was no easy feat. In addition, the game can only be played in portrait mode, so it is impossible to gain additional screen space by flipping your phone or tablet. 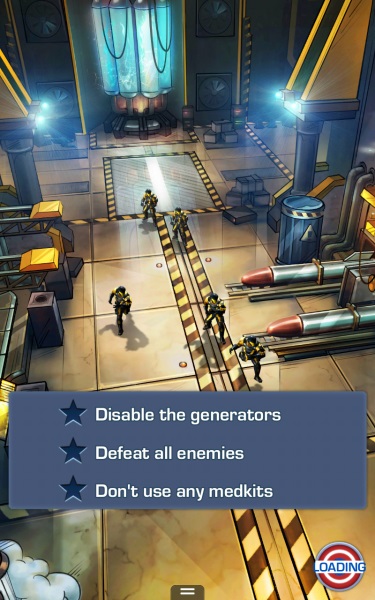 There’s also no viewable map. While the game offers a vaguely helpful blue arrow to point you to your next objective, it simply points on a straight line system, meaning you may often have to find the way around to the objective yourself. Additionally, maps are not completely linear: there are alternative paths and dead ends, meaning a religious following of the pointy arrow will often make you miss these extra areas.

To top off the annoyances, completing the map’s final objective automatically exits you out of the mission without a prompt. If you want to collect loot off that last set of enemies, or go explore for hidden areas, you have to make sure you do it before that last enemy falls – or suck up your loss and play the mission again.

The Price of Freedom is High

Because CA:TWS is a buy to play game, the cash shop is unobtrusive, merely offering cash as an option to get the items you need to complete missions. Despite this, the cost of playing is high when measured in in-game currency. As mentioned earlier, each agent’s unique skill is locked to the number of uses you have purchased. Everything costs coin here, and lots of it, which means you’re often forced to choose between making your agents stronger or using their skills to make missions more enjoyable. This shouldn’t be the case: your agents should be more than auto-attacks, but – with the exception of the Heavy class – you’ll be stuck with S.H.I.E.L.D. pets if you decide to opt to for progress. There’s no reason to not simply put these skills for free use on a time-based cooldown, especially when the game is already purchased. 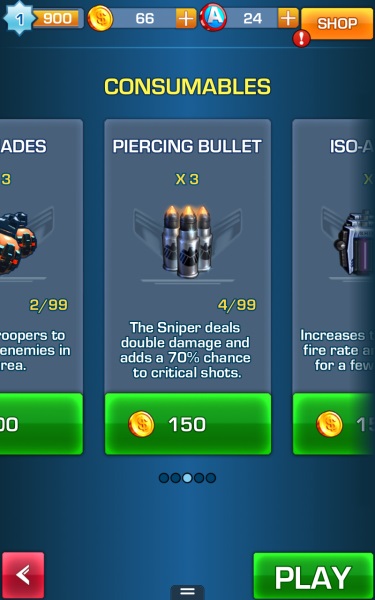 What’s it all mean? If you want to really keep up or compete, you will have to grind, repeating older missions to recollect coin rewards. Without dropping the time (or the cash) in, you’ll be struggling through missions with downed agents and a growing grudge against the low payouts from the lucratively rich S.H.I.E.L.D.

Captain America: The Winter Soldier – The Official Game is not worth the time or money, even for die-hard Cap’n fans. On the surface, the game teases an in-depth tactical experience for mobile, substantial social PvP and PvE, and a gritty tie-in with the movie. None of these promises fall through. The gameplay is clunky with awful camera angles and poor currency earnings; PvP is nothing more than a computer simulation calculated in seconds; and guilds seem to be either broken or generate zero interest from the community. On top of that, the “Captain America experience” is downright repetitive and childish, from the comic book “Ouch!” when you take damage to Captain yelling out trite, bossy phrases and comments about Uncle Sam – hardly the Captain you’d expect after watching the films. The Official Game is really nothing more than a kid wearing star-spangled briefs on his head and claiming to be a hero.