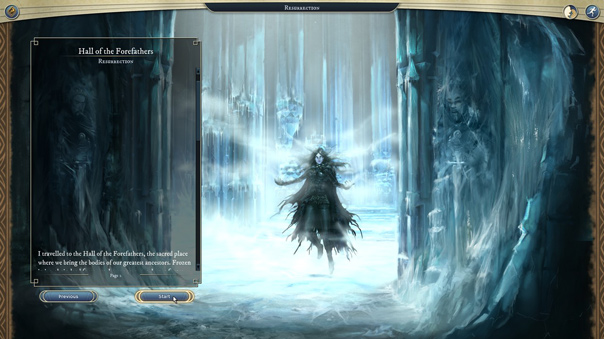 For those unaware, I have previously written on Age of Wonders III at the initial time of launch, a turn-based strategy game that follows the 4X Principle: Explore, Expand, Exploit, Exterminate. It is similar to the gameplay style of titles like Civilization. In it, you control a Warlord with your choice of race and class (with additional races being added in the two expansions I will be covering) with a typical goal of destroying your enemies. Of course, in the campaign you have a variety of tasks, such as keeping someone alive, building a certain number of Metropolis-sized cities, resurrecting cities from the ashes with dark magic, and much more. There are also scenarios to complete, with additional faction-specific scenarios added in these expansions. The scenarios will feel very familiar if you have played Heroes of Might and Magic or Warcraft, as they are structured similarly: X Map, Y characters/players, Z goals. 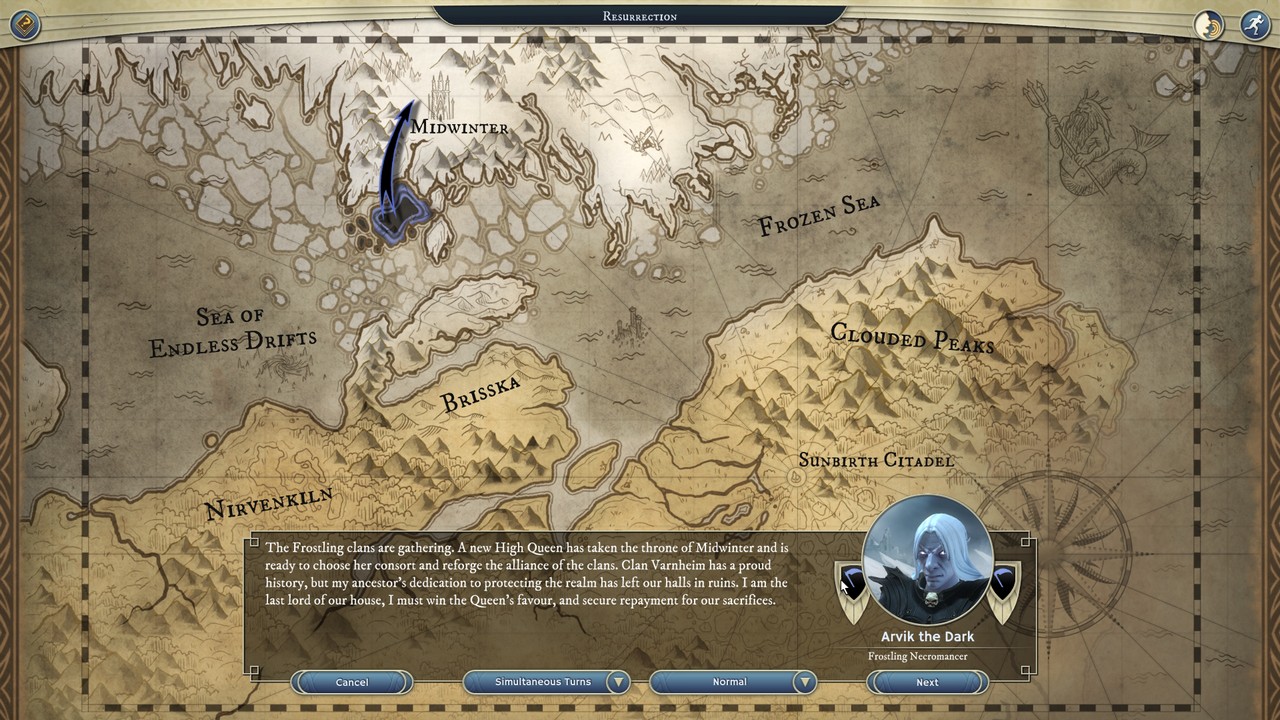 Winter is coming. It's always coming.

I love this style of gameplay. It’s challenging, but always offers a nice broad world to explore and dozens of ways to accomplish your goals. Plus with the forthcoming expansion, Eternal Lords, two races from prior Age of Wonders games (Frostling and Tigran) are coming back for another go around. Each race feels unique and special, and not a generic reskin of each other, which is a credit to this style of game. It will ultimately offer more replay value in the scenarios and online multiplayer. Age of Wonders III is no walk in the park and the expansions are proof of this. The game doesn’t slack nor does it give quarter. You work for every victory, and I love every moment of it.

A Golden Age for Hobbits. . .Halflings

The Golden Realm offers up Halfings, happy-go-lucky (literally!), clever, and peaceful demihumans who just want a tranquil existence. Even their units express their want for a life of jocularity, with Halfing Jesters being their ranged ground unit and their support unit being the Brew Brother. Much like the original AoW III, there is a campaign exclusive to this expansion that follows the tale of Ernest Thistlewood, a Halfing Warlord out to make his way in the world. One of the most interesting things to come to Golden Realms is the “Mystical City” upgrade system. As you explore, you will find treasure sites/ruins, and successfully acquiring these will either upgrade your buildings in unique ways, or make your forces stronger in a plethora of ways. Empire Quests make their appearance as well, which also come into Eternal Lords, proving they were at least interesting enough to keep around. Empire Quests are quests that are global; anyone can take part in them, and the first to complete it reaps the benefits. Some of the bonuses can be acquired even if another faction gained it first, for instance, if you defeat someone with the Imperial Residence and opt to not raze it to the ground. 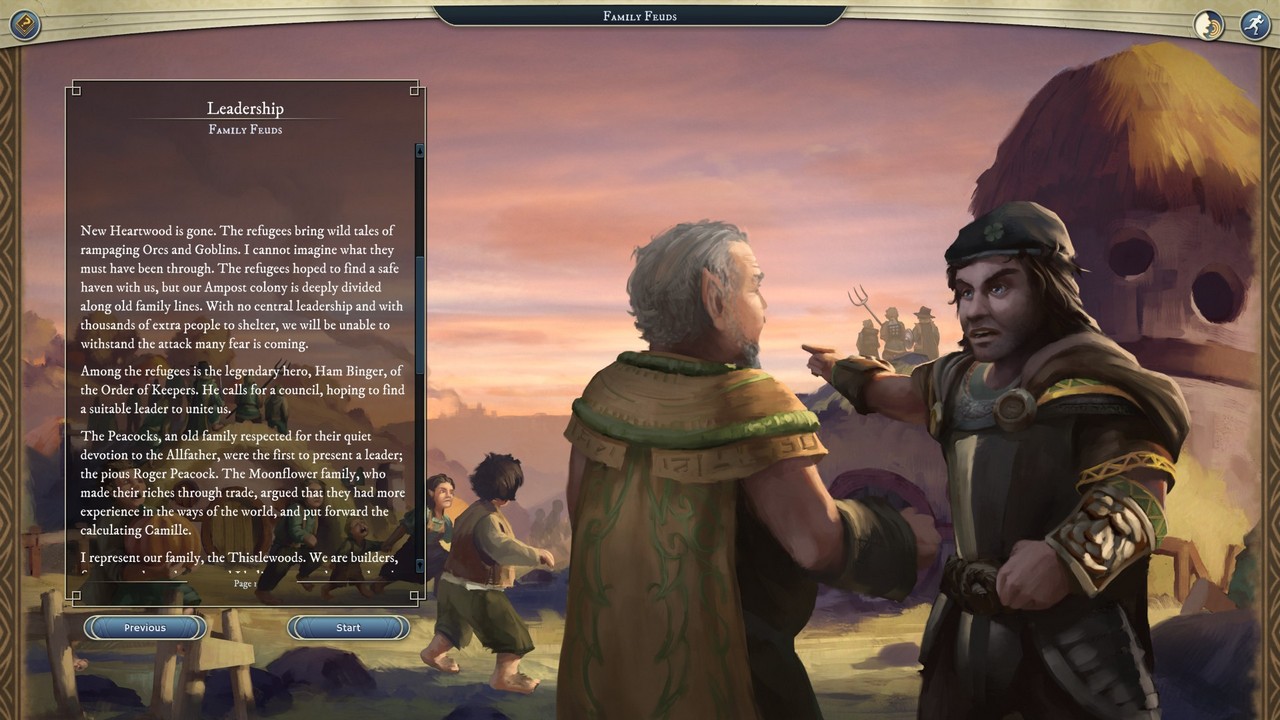 These ain't your Tolkien hobbits.

Magic! That is one of the driving forces of any fantasy game, and Age of Wonders III offers a new focus in Wild Magic. Wild Magic embraces the luck factor that Halfings use and grants fairly random magic effects, such as a type of elemental or a buff/debuff that comes from a list of potential ones. Halfings are not physically dominant like the Orcs or many other races, but they are very Lucky. Luck is a stat that comes in Golden Realms, and the “Lucky” ability gives a unit a chance to avoid the effects of incoming attacks. Having it twice does stack, making them “Very Lucky!” Luck and happiness are the keys to success in a Halfing faction, and can make for a very frustrating enemy to encounter in multiplayer. While luck is important to a Halfing, another specialization comes to light in “Partisan.” Think guerilla warfare, stealth, and cunning. There are a small pile of skills that come with this specialization such as “Folk Hero” and “Hide Out,” making it quite useful. I was leery, given that while I love fantasy, I’m not such a big fan of Halfing type races, but I found their campaign to be clever and interesting, and I found myself swiftly immersed in their lore.

Not really limited time . . . Eternal Lords is the expansion on the way for the Age of Wonders III title. In it we get to play a campaign focused around the Frostlings, and a Necromancer, starting with Arvik the Dark, a Necromancer getting his feet wet in the frozen realm he calls home. I feel like his name is more than a little silly, but the silliness stops there. The coolest feature (no pun intended, I swear) is the Necromancer spell “Animate Ruins.” Casting this spell on a ruined/razed city will turn it into an Undead city, which will allow them to produce Necromancer-exclusive units instead of whatever they had formerly. In multiplayer games this can be key, since you may not want the other units and instead, would rather have an army of ghouls to send to their undeaths; this can save a lot of money on Settlers, if you’d rather simply annihilate a city and take their smoldering ruins to make your own. You can also cast “Corrupt the Source” to corrupt Great Farms or Springs in your domain, making them another source for your undead powers. However you cannot normally absorb living cities. Instead, you destroy your opponents, or utilize your powers to corrupt. It’s all very grim and evil, but I do feel like I should note that outside of the campaign, more than Frostlings can play as Necromancers. 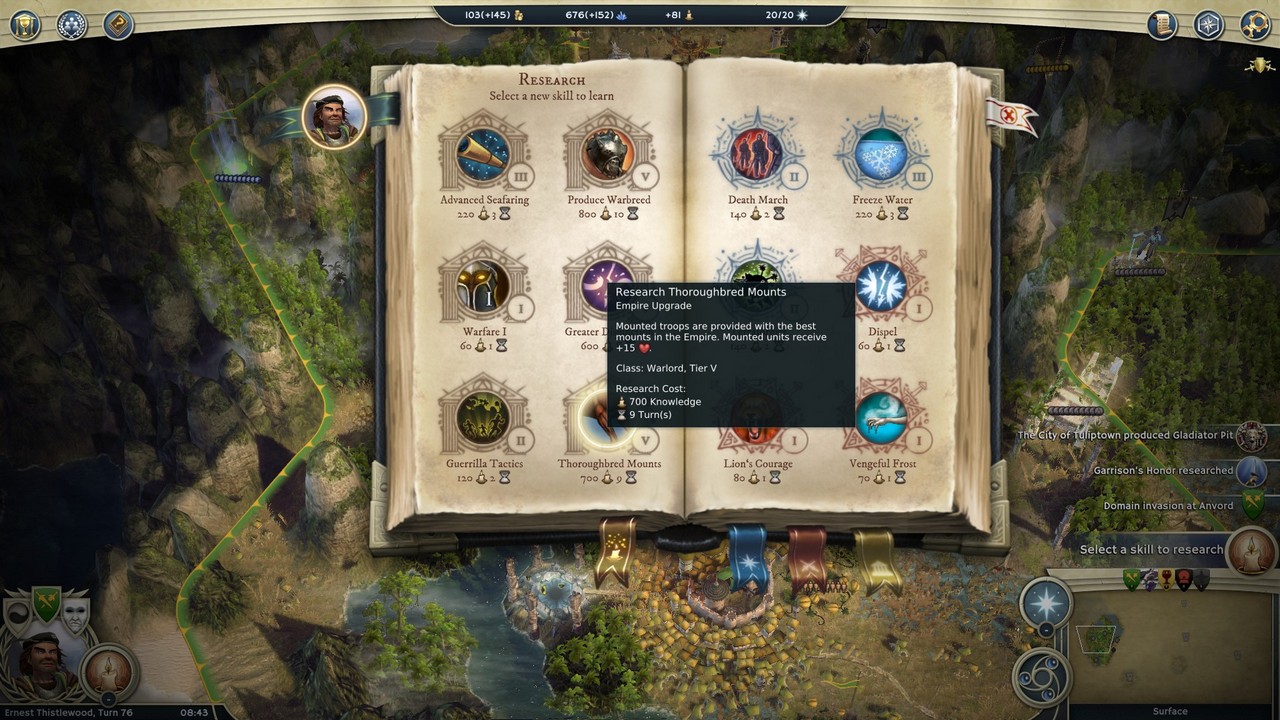 The tech tree is still one of the most unique in the 4x realm.

Another new concept in Eternal Lords is the idea of Race Governance. I really like this concept, quite frankly. The idea is that the longer you spend with a particular race in your empire, the stronger your bond/control over them grows. As this happens, there are tiers that provide particular abilities to enhance your units in different ways, stronger with each tier. It can be little things like enhancing your ability to siege, and more. Once you hit that final tier, you can create a Unifying Beacon, and if you build enough of them (depending on the game mode), you can win with Unity instead of simply conquering. Cosmic Occurrences or Happenings also exist now, which can devastate the course of the game, or set events in motion that will allow you to win rather handily! They will not literally change the game in one turn, but interesting things happen when the planets align…There are quite a few new places to explore, and considerably powerful new Specializations based on the three alignments (Torch Bearer, Grey Guard, Shadow Born). I’m excited to see what the high level play of Necromancers bring to the table, being one of my favorite fantasy archetypes!

Is The Same Old Really So Bad?
Score: 4/5 Great

I’m in love with Age of Wonders III all over again. It’s a terrific fantasy strategy game with something new and fresh being offered in both expansions. New victory conditions, new classes (or returns of old favorites), new characters, lore areas, lengthy and challenging campaigns! Sure, the game is unforgiving and difficult, but it’s a nice hearken back to older strategy games of my youth such as Heroes of Might and Magic, as I have probably said before. Kudos to AoWIII, they are really offering something unique, fun and suitably difficult. And I have to say, I love resurrecting cities in my own grim visage. That was one of the coolest points to be offered in the new expansion. Though I have to say that I still hate the controls. I do not feel they have gotten any better. Sometimes simply clicking on a unit is not enough and that drives me mad, but not enough to hate this title.

It’s a beautiful game, all told. The two expansions look radically different, and I found it pretty easy to immerse myself in the beautiful, lush forests and plains as swiftly as the dead, cold frozen wastelands. The units all look interesting, the heroes are well designed. All told, it’s a very pretty game.

The controls however, drive me absolutely damned batty. Sometimes (most of the time) simply clicking on one of my units does nothing. I’ll have to click again, or sometimes a third time, simply to get them to start moving. I also feel having a key to confirm auto movement is a little redundant. It’s supposed to be auto-move, not confirm-move. Other than that, controls are fine, but that one little thing can be maddening all on its own.

While there are just scenarios, campaign, and online multiplayer, the various abilities and general uniqueness of the factions really make up for that. Each group will feel different, and it will show in repeated gameplay.

I do like the sounds and sensations of this game. From the rowing of boats into the frozen waters, the hungry flapping of wings of dragons, and the thundering, rolling beats of the music, I really enjoy simply listening to this game. It feels epic and profound somehow, and that’s quite alright with me.

Want more Age of Wonders III? Check out my video review of the Golden Realms!