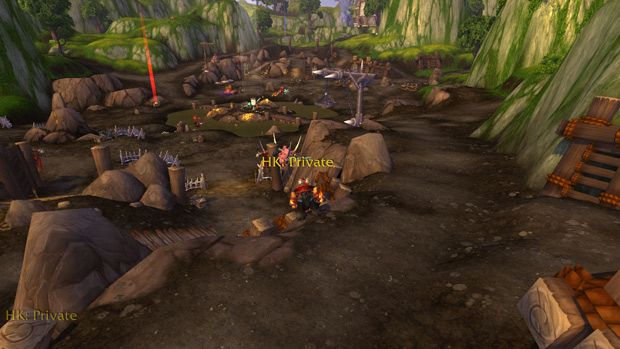 Look, they can’t all be winners. I do the best with what I can. PVP has been a part of the game since its inception, and for better or worse, it has always been a large part of the game. Not everyone is interested in the lore, or end-game content. Large portions of the player base are people who just like to PVP, and gain a great deal of enjoyment in being as good as they can possibly be at it, joining Blizzard’s PVP tournaments at any opportunity. PVP comes in several flavors, for people that want to do it in different ways. For those who are on PVP servers (such as myself), you can kill an opposing faction member anywhere you find them, except in the rare sanctuaries that exist. This can be a lot of fun, but more often than that, it can be a terrible trial, being ganked constantly by players several levels above you. New expansions on a PVP server, especially if your side is not dominant, can be an absolute nightmare. I personally died sixteen times trying to complete a quest during Cataclysm’s opening days.

For those not keen on that, Player vs. Environment or Roleplaying servers may be a better idea. There are of course, RP-PVP servers, for those who wish to be violent and PK (player kill), while enjoying potentially in-depth roleplaying. For those who prefer structured player versus player combat, there are several options, and each iteration of the game comes with more. These are not always balanced, or fair. A prime example is the battleground of Alterac Valley. This is a 40 vs. 40 player battle with the Frostwolf clan doing battle with the Stormpike. The map is huge, and there are many things to do to turn the tide to your side. But the most important thing to see, at least from the Horde side, is the Horde base is incredibly easy to get into. The Alliance base has one way in, along a bridge, guarded by towers. It is terribly slanted towards their defense.

There are a variety of PVP challenges, though. Each has their own amount of players and objectives. From Arathi Basin’s 15 on 15, where the objective is to hold a series of five choke points and gain resources, to Burning Crusade’s entry, Eye of the Storm, in which the goal is to hold several points while gaining bonus points by delivering a flag from the center of the map to one of your held towers. Choke points are popular on several of these maps. One of the originals is still one of the best: Warsong Gulch. Warsong is a 10 vs. 10 capture the flag style battle. There are minor imbalances in the PVP battlegrounds but all in all they are very enjoyable. If there is a tie, and the other side is feeling surly, they can fort up and wait the timer out so nobody wins, which can be a real downer after playing fifteen minutes. 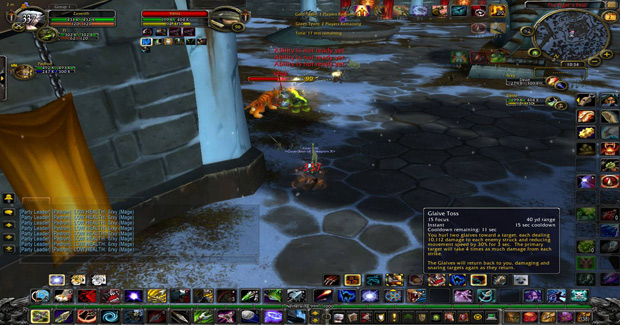 Truth as Hard as Steel

For those of you who want their PVP to be a little more direct and small-time, there are the Arenas. The Arena offers 2v2, 3v3, and 5v5 combat, and although you can no longer randomly queue up for it, it is nonetheless very much a part of how the PVP scene in World of Warcraft works. Each arena itself has its own layout and physical advantages to make use of, whether they are pillars, hills, or water traps to lay in wait in. These matches tend to be a bit faster than the battlegrounds, but that does not make them suddenly more balanced. While a great deal of video games have an eSports (Electronic Sports) following, World of Warcraft really does not. Perhaps that is because there is a great deal of imbalance in the game; or maybe Blizzard simply keeps a tight hold upon it. There are arena tournaments, but they are typically held at very large game expos, or at Blizzard events, such as Blizzcon. Sadly, there is still no word of a Spectator mode to view some of these amazing pitched arena battles.

There are two factors that create a problem with PVP: gear and class abilities. Anyone can get gear, in theory. Playing long enough will get you enough points to get PVP gear, or with gold these days, you can buy crafted blue (rare) PVP gear to use to get a start. Class powers, however, make it a much different beast. Some classes have very obvious advantages over others, despite what build they take: druids, for example. With their ability to shapeshift, it is nigh-impossible to pin one down with crowd control abilities. They can simply pop form, and get out of it. Some of their shapes are even immune to other shapeshifting abilities, like Mage’s Polymorph. They can also CC in any form, or swiftly shape out to one, cast a power, and shift again, making them very hard to deal with. Then there are Rogues. The old argument in trade chat was that Rogues are only built for PVP. They do lots of DPS (Damage per second) and have a great deal of single target burst damage, but they have fewer utilities for raiding and dungeons, unlike other classes. However, Rogues in PVP are horrifying. Having one on your team can be crucial with their plethora of abilities to slow, stun, blind, or disorient enemies.

All classes have some manner of control for players or mobiles, but Rogues and Druids do it better than anyone else. There are a variety of team compositions you can implement, and they will virtually always have a place upon them. These days, PVP gear and abilities have become so proliferate that people advertise wins for gold on trade chat, or people beg for carrying through PVP arena matches for gold or even real money! Things like this ruin the integrity and hard work that people who make PVP the basis on which they play less valuable. There is nothing wrong with someone on the team having far more skill than the others, but when you are paying for someone to carry you for a title or a mount, or even gear, there is something to be said about that. And I fear that it isn’t good.