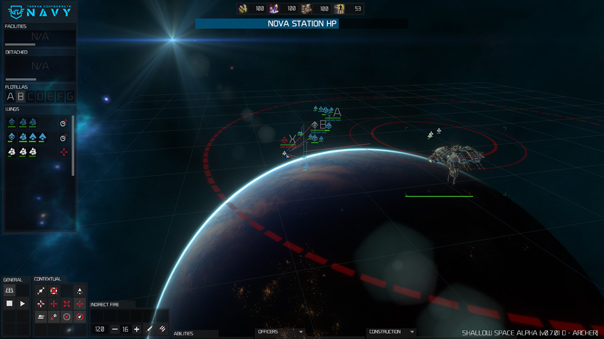 Boldly Going Where Few Have Gone Before

The RTS scene is not currently awash with stellar titles; the big one being Starcraft, but it only operates on a 2D plane. Shallow Space takes the road less traveled and reminds me of Homeworld, the first 3D RTS game. In a few ways they are similar, but Shallow Space is definitely its own game. The demo is pretty simple, you have a series of floatilla and wings of Spaceships, and the goal is to protect the space station they are from against an endless wave of opposing ships. While it may not seem like there is too much going on, the game is going to offer a great deal of strategy and thought to succeed! As they say on their indiegogo, you are a battleship commander, a “small cog in a very big wheel.”

This is a way to play RTS games that is not tried often enough, despite there being quite a few space strategy games. It is going to be more than a simple RTS though; Special Circumstances is combining many RPG elements with the constant decision making/action of a space RTS. With tons of customization, lots of interesting story elements, combined with an X and Y axis to maneuver upon, there’s going to be a lot to learn for players who pick this up, no matter what experience you have in the RTS genre’, Shallow Space: Insurgency is going to be offering a unique and fun experience, I can feel it.

Space Explosions May Not Be Scientifically Possible. . . 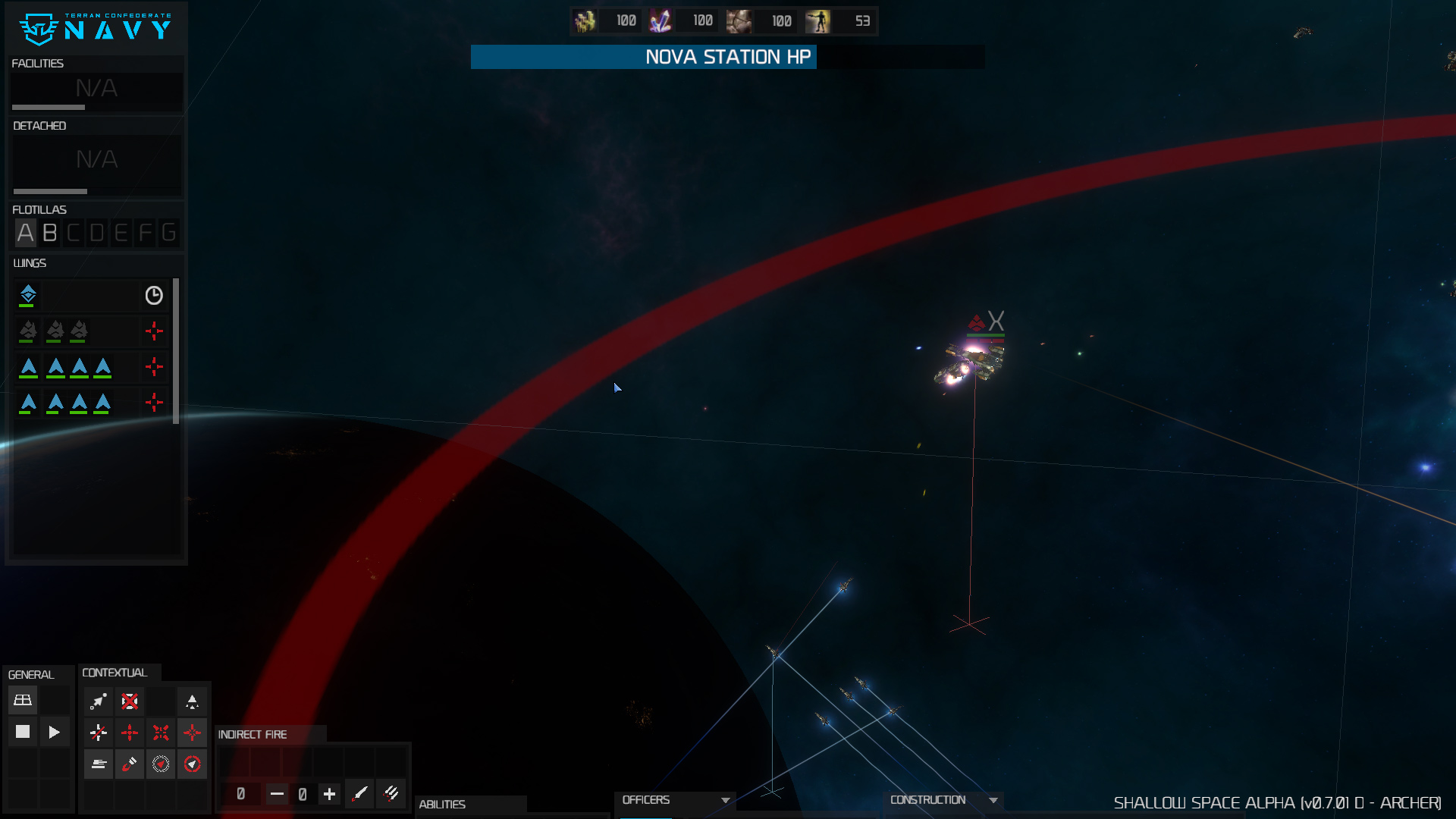 In Shallow Space: Insurgency, instead of simply having ships that are off by themselves where you left-click-drag to highlight what you want and order them around, the battleships and starships are organized into easy to use wings and flotillas, with a very clever UI. It takes a little getting used to since hovering over an icon at this moment does not tell you what it does, but the tutorial video included in the demo certainly does help a great deal. On the left side of the screen there’s a series of letters, A-G, and each will have a small series of blue icons under it. The letters are your flotillas, the wings are listed beneath. The icon next to the ships and health bars is an action icon, which lets you send them to do particular things. Heavy battleships can deploy small wings of ships to do battle, and lots of other fun abilities are coming.

There are so many more customization options on the way. From talent trees, ship customization down to turret placements and hull design, there is a lot of work going into this indie title. It will not be so cookie cutter as other RTS before it where you have X ship which can do A ability. Instead you have X ship which can be customized to do Y, Z, A, B, and/or C. In some ways it reminds me of what EVE could have been, with not only unit construction, but the ability to construct your own Space Stations. I can only hope they can be equipped with gigantic, terrifying death lasers to obliterate entire flotillas at once. That’s my kind of space battle. But customization in games like this is certainly exciting, and I’m looking forward to more than just this demo.

A Long Long Time Away

Though I do not know the story quite yet, I do know it will involve several factions, and they are vying for control of a planetary setting. To progress in battle you have to mine resources and acquire blueprints, which makes sense as it is still at heart an RTS, but I do wonder how much time it will take to customize and set up your ships, from hull to turret placements; can you do this in multiplayer matches? Or do you have to set this up well in advance? I feel like customizing during battle could be a very negative force, as someone who does not have to worry about this is just going to bombard your forces with vigor and aggression. Now, I do imagine it won’t be as strenuous during story/bonus missions, but against other players? It does not sound like it will work out if the player is indecisive/constantly trying to play the counter game versus whatever the opposition is bringing. 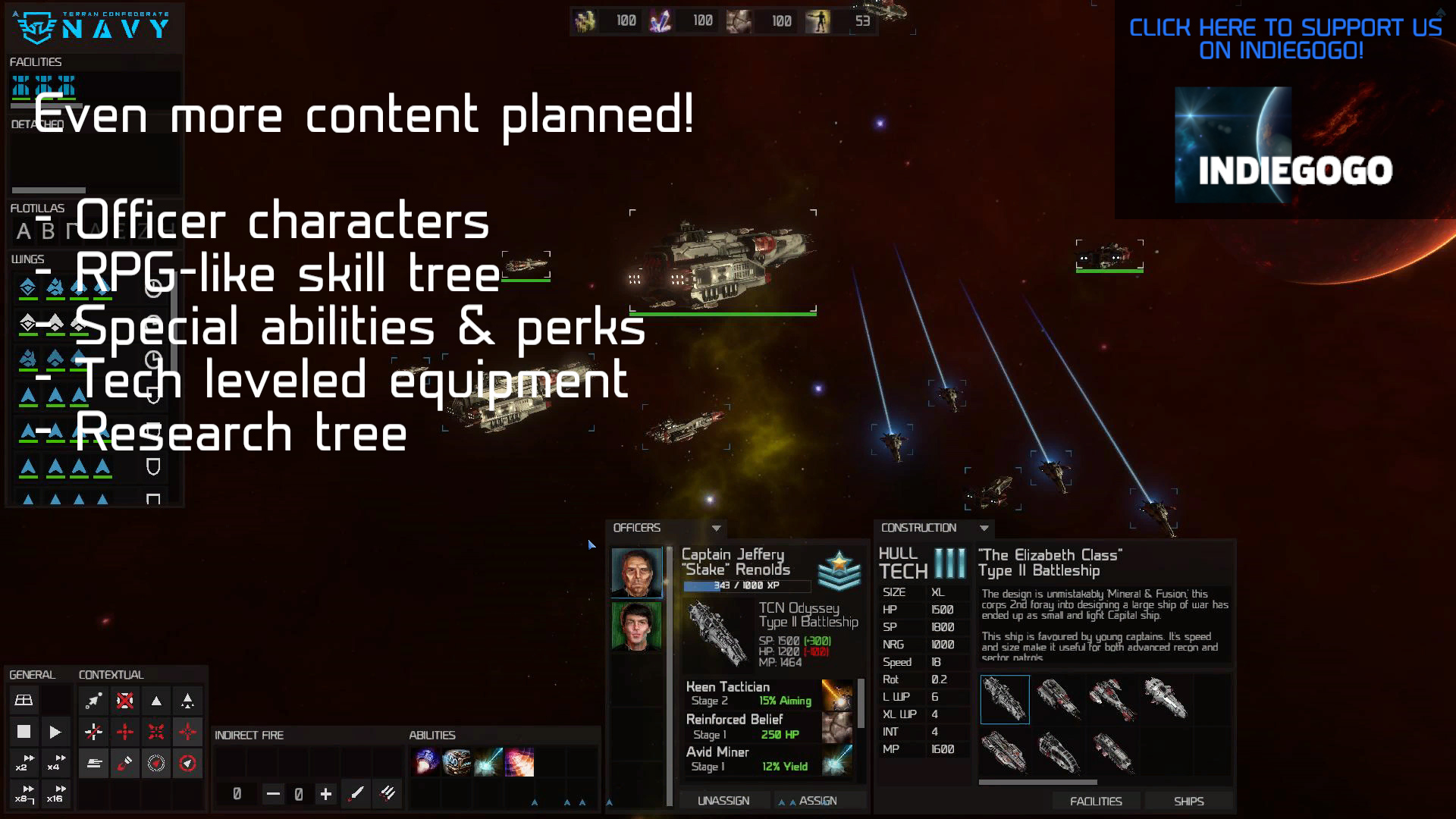 This is just the tip of the space iceberg comet.

I do have to say that the controls take a great deal of getting used to. There is an ability to slow down/stop/speed up time which makes me wonder how it will effect player vs. player encounters, if that’s even going to be an option. Since you have to move on the X and Y axis, you have the WASD to move the camera up/down/left/right, Q/E to move it up and down, and your middle mouse button to remove the UI and rotate the screen as you choose. The Z key zooms in, so you can see better details of what is going on in the game. Normally you are zoomed out which makes the ships a little smaller and less impressive. The actual controls of using abilities and moving ships can be kind of frustrating too. I had a bit of a hard time when I instinctively went to left-click to highlight groups; I found the ships weren’t always responsive that way. I suppose the UI is there for a reason, as sometimes these extra buttons would get my ships flying where I wanted and killing what I please.

The difficulty in the demo is not strenuous, since it is an infinitely spawning series of waves who have clearly labeled drop zones. Once you get used to them on the first wave or so, it becomes pretty easy to anticipate and demolish them. It doesn’t do a lot of justice to the game, but there are tons of videos on Youtube with more advanced gameplay. I was definitely hoping to get my hands on the customization options and explore some of the bigger ships, as well as officer talent trees. Shallow Space: Insurgency may not be the next Homeworld or Starcraft, but it’s definitely on the ball, and it should be interesting to see what they’ve got cooking for future updates.

Help make sure this becomes a reality! Support them on Indiegogo!