Online multiplayer 4X strategy games may be on the fringes of what we cover here, but that doesn’t mean I love them any less. After many convention shows where I practically had to beg 2k Games to let me inside their booth, I was pleasantly surprised to receive a direct invite at last to go hands-on for a full fifty turns of the current stable edition of Civilization: Beyond Earth. And speaking of fringes, this game is pushing more boundaries any title in the series before it. Here’s my take on why this one has the potential to be the best Civilization game to-date. 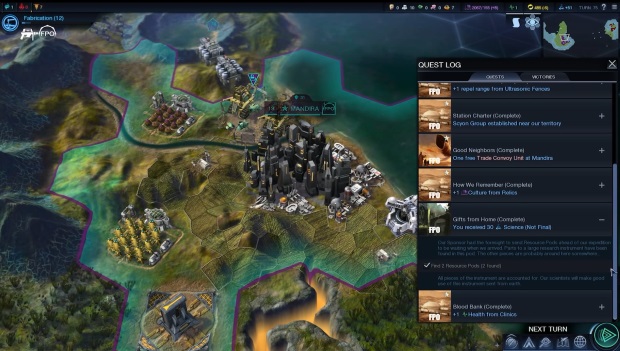 Well for starters, I sadly only made it through thirteen of my promised fifty turns. Coming from an MMO site background, they must have assumed I was a dirty casual to the series, as a true Civ master getting hands on time with the latest game in the series is going to have a lot of questions, and click through a ton of menus in those first few turns to get the best possible understanding of the game mechanics as possible. Thankfully this Civ features fully voiced over tutorials for just about every aspect you might not be familiar with, and with the unique take on ‘barbarians’ as alien creatures, excavation sites, quests, miasma tiles, and satellites you will have plenty to learn even if you’ve been playing since the first renditions of the series.

One markedly different element of gameplay is the emphasis on early game decision making. Typically in Civ you spend countless turns early on rarely picking research, occasionally deciding on a civic or whatever culturally driven function was present in that version, and gambling scouts and warriors in the hopes of finding the infamous goodie bags, aka ruins. But now you’re in charge of an interstellar corporate fleet that’s hundreds of years more advanced than anything we’ve previously seen in a Civilization title before, and the gameplay does a great job reflecting this. 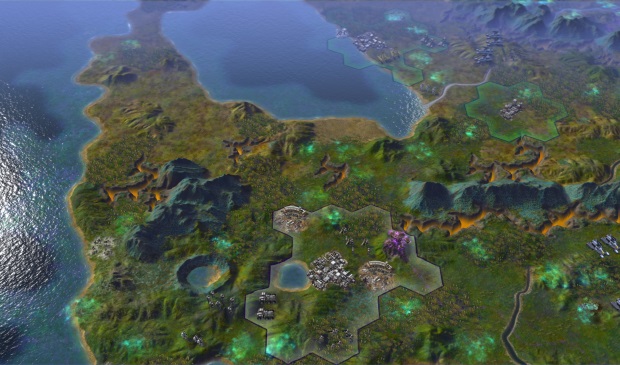 For starters, they’ve done away with the nonsense of not having contact with other major civilizations for thousands of years. As the game progresses, you’ll see visual indicators showing where other ships are landing. The leader of said group will immediately contact you, though you won’t have any further indication of their expansion until you physically scout them out with your units. While initial diplomatic options remain rather limited, people living in Megaman’s eternal 2xxx era at least have a grasp on open borders right from the start. I asked if the AI civilization’s starting turn was one of the ways difficulty levels were adjusted in the game, but they denied it. Apparently the later a civilization enters the game, the more starter bonuses they receive to immediately put them on par with their rivals.

The game is still very much about choosing your best city spots, only you will need to relearn your table of resources to understand what is what in this alien world. I stumbled on a nice little canyon free of miasma that was rich with fungus and tubers, seemingly the cattle and wheat of Beyond Earth in terms of resources given. After cautiously edging my scout past a rather powerful but peaceful barbarian wolf beetle I stumbled upon a miasma filled canyon between impassible mountains that was rich in copper. 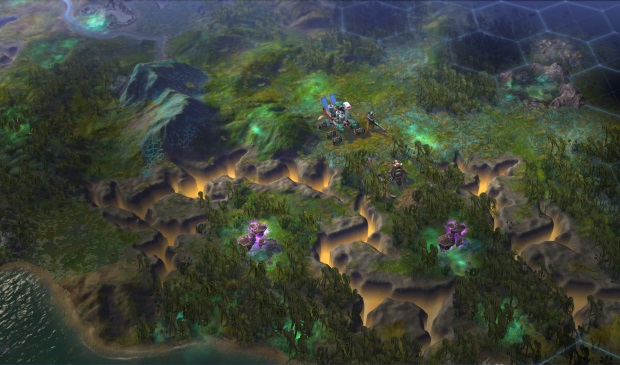 The miasma was quickly sapping the strength of my scout, which led me to two further questions. Can units heal outside of the boundaries of your civilization? The answer was yes but at a slower pace than past Civ games. My next question was can miasma be cleared manually or do you need to expand your cities’ culture to clear it out. Turns out miasma doesn’t give a lick whether it’s in your culture or not and will still persist should you build a city in the middle of it, like a much more devastating edition of jungle disease from past games. However you can research technology to train your worker units to clear miasma manually, or even build a satellite that can zap an area clean of miasma all together, which is vital for keeping your nation’s health in check. A city’s health resource seems to be a combination of happiness and healthiness from past games, and can impact your productivity, rate of growth, science, and culture if not carefully balanced.

While on the subject of satellites, my scout hit the jackpot of resource pods, uncovering a solar panel satellite. I immediately set it into orbit just outside my capital city, and gained the bonus of receiving a free energy resource on all worked tiles in the area. Apparently satellites have finite lifespans though so as awesome as this bonus was to my early economy, it apparently would have only been a temporary boon. I didn’t play long enough to get a feel for how long these satellites last unfortunately. 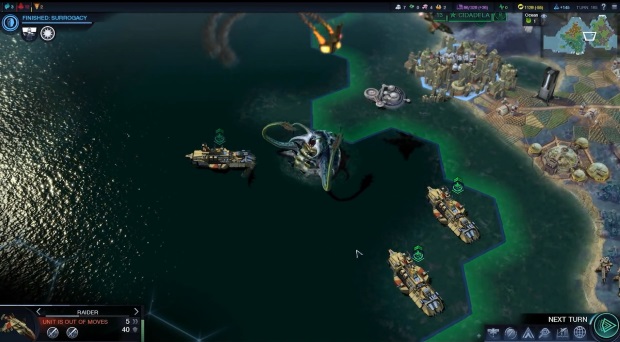 My starting point was rather isolated, so I didn’t get a chance to test out the neutral space stations I had read about that act as the new version of city-states, but I still dabbled a bit in the questing system even without their inclusion. It seems that quests exist as a driving force to put the player in moral dilemma situations that push you towards adopting one of the three national affinities: Harmony, Purity, and Supremacy. Supposedly one of your starting quests can eventually even build towards a special victory condition as each piece you complete unlocks more story for your nation as well as rewards to help you overwhelm your opponents. In my case there was a crashed ship near my capital that contained rare tech equipment that would help bolster our progress towards greater power, but it was contaminated with Xenomass. I was given the option to leave the equipment there to avoid possible contamination (purity route) but instead decided missing out on such an early game advantage could cost me in the long run, and sided with taking the equipment and bolstering my affinity towards Harmony and Supremacy. Before testing the game I was under the impression that you could only be one of the three affinities, so the possibility of ending up a mix of two seems quite intriguing. 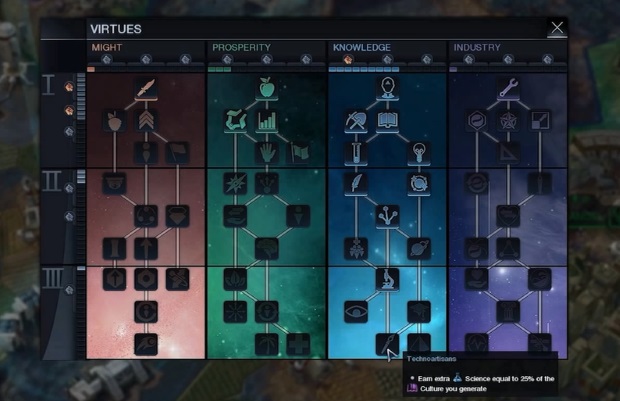 Offering more tactically viable options seems to be a major focus in Beyond Earth, which is most obvious in their rework of the culturally driven civics system into the new Virtues options. Virtues act as your nation’s guiding principles and hold massive sway over the progression of your people. Right at the start I had access to all four trees including Might, Prosperity, Knowledge, and Industry. The key difference between Civ 5’s civics and this is that here each tree branches far further down the page, with three segmented levels of progression for each tree. Virtues must be unlocked from the top down, and certain Virtues have prerequisites within their tree to block you from just picking and choosing any of the group. Another new element that encourages more tree mixing than the past is the inclusion of Synergies, extra bonuses that reward you for putting more points across one of the horizontal tiers than necessary to advance. This means you can go heavy into the early prosperity and might trees to get an early game heavy empire and snag a few extra bonuses to balance it from crippling your late game as badly as you might expect. 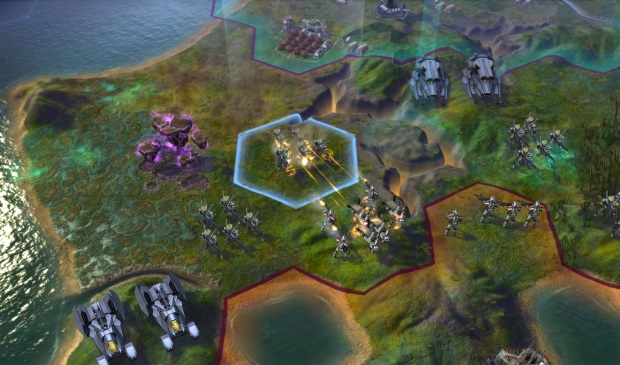 As my game time was coming to a close, I managed to stumble on a resource pod that sped up my first research project to completion. Nostalgia struck me as a narrative voice read off a quotation related to my discovery, but then it hit me. I had never heard such a quote before. I asked the developers standing by if it was a real quote, to which they replied, “of course it is,” followed shortly after by “well real in our game world anyway.” No doubt the minds behind this game are embracing a bit too much into the Harmony affinity. But that did lead to discussion that a Civilopedia will be present in-game with just as much lore rich information as past civs, painstakingly written to make this crazy future rendition of the game feel just as historically plausible as past versions of the game.

Long story short, don’t be scared off by the science fiction setting of Beyond Earth. From what I saw in my short time playing, this is without question the evolution of the franchise fans have been waiting for.