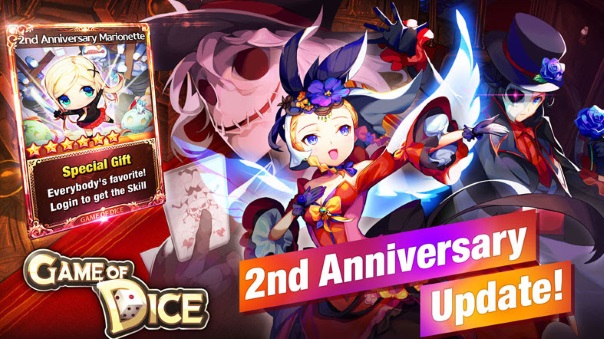 Happy Anniversary, Game of Dice! Joycity has updated the game to celebrate its second anniversary with some great new content! First off is the new map, Theatre of Fate. In this, players can choose either a Defense or Attack Tarot cards, and the Defense card benefits your ally, and Attack will give a disadvantage to the enemy. There are a variety of buffs that can occur, such as Toll UP, Take Random City, Pause, and Summon Random Property.  The Matching System is also being fixed. Ranked System is being added and matching via players current JOY. The “Lab” feature was also added, where users can play with an AI by choosing a character, skill card, and dice him/herself. Guild Safehouses have also been added so that Guilds can communicate easier and have fun together.

As if that weren’t enough, Game of Dice will be holding a variety of events after the update. Users that log-in will get the Marionette Skill Card, and any user who completes the new guide mission (until Oct. 26th) will get a 6-Star 2nd Season Card Pack.