Dawn of the Immortals Launch Review 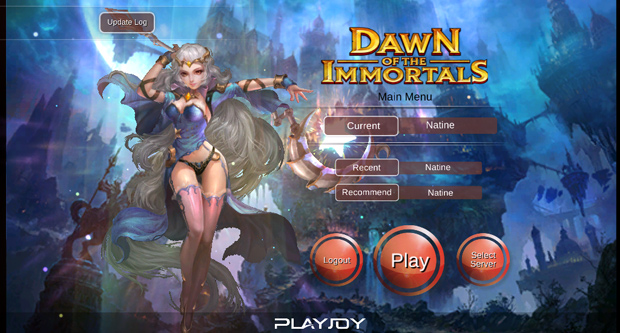 Yet another typical MMO with Dawn of Immortals

If you’re in the mood for some generic, glitchy MMO gaming for your mobile devices, have we got the title for you. The name of the game is Dawn of the Immortals, and like all titles that try to sound epically cheesy or cheesily epic, it comes off as a lackluster clone of something that was famous then, but failed to replicate its success.

In this case, it’s a copy of the many browser-based MMO games porting over from China lately. It’s certainly not a good base to start out with. It was merely reskinned for obligatory copyright purposes and served as a mobile port for downloaders that will try and bite. 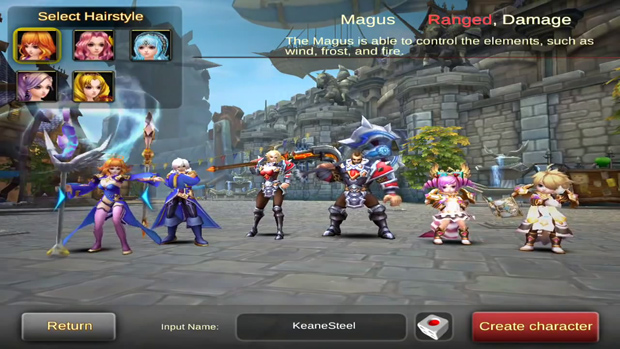 Dawn of Immortals is a 3D mobile MMORPG. The player chooses a character from the start from an array of three stereotypical RPG job classes – a melee type, a ranged magic type, and a support type – each available in both genders. The game is set to explore a world that’s inspired by both steampunk and fantasy designs.

It’s not really that expansive as the game follows a linear quest system. No side quests or optional dungeons or anything. So you can take your own sweet time grinding and exploring an area without fear of getting sidetracked or activating a scene or a boss fight you’re not ready for. But that too in itself is a bad thing as the creators only really add new content at the latest development of the “story,” so there’s no real option (or purpose for that matter) for backtracking. 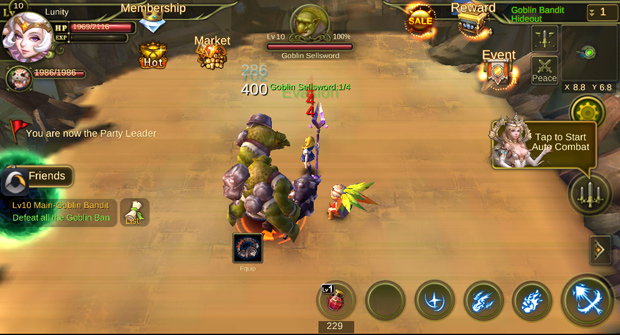 Thankfully, there is no stamina system. You are only limited by your health bar and how long you can stand repeatedly tapping on the screen. There is no mana bar as well. Your skills just follow the cool-down system, which is nice as it means you won’t really be bothered to manage a lot of resources in combat, and you have most of your moveset available to you right from the get-go.

Like other browser-based MMORPGS, it has a quest bar that you can click that automatically directs your character to the quest destination. So if you need to talk to someone or go somewhere or deliver something, just tap on the quest title and your character automatically dashes towards where you need to go. It’s convenient but also easily abused.

It also works on combat quests, meaning that if you need to kill 10 of a certain monster, you can just repeatedly tap and mash the quest, and your character will automatically hunt said creature. This is what ruins the game as you will feel that everything is on auto-pilot. 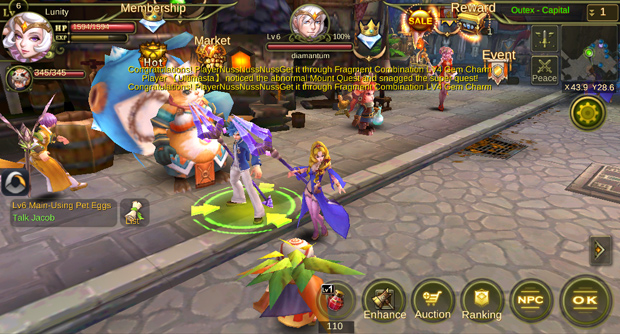 Most of the quests are dungeon-based instances, which means you get to fight wave after wave of different enemies, and it gets dull so fast as there is little to no challenge in the fights themselves. With good equipment handed out like candy and powerful movesets available very early in the game, you will rarely need to worry about breaking a sweat to progress. Boss battles stand as the only entertaining piece of the puzzle, as simple auto-attacking won’t cut it and a few attacks need to be manually avoided to succeed. Unleashing your special attacks as soon as they come off cool-down is vital to winning these drawn out wars of attrition.

Like most browser-based MMORPGs, the game has a reward system based on how much time you spend in-game. Rewards are bountiful in this game, and I guess it’s what they offer as incentives for people to keep playing an otherwise monotonous routine. 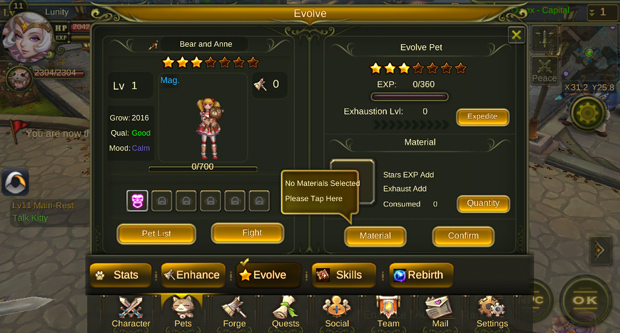 One of the signature elements of PWE’s Immortals franchise has always been the pets and Dawn of the Immortals is no different. Like everyone else here, pets can be unlocked very early on in your adventure. Pets fight alongside you and can be customized, collected, and evolved. Tapping into the tried and true monster collecting and evolving aspects utilized by so many other mobile games is one of the few features that likely keeps anyone playing. Some visual alterations are also available if you want to set your pet apart from its counterpart clones. 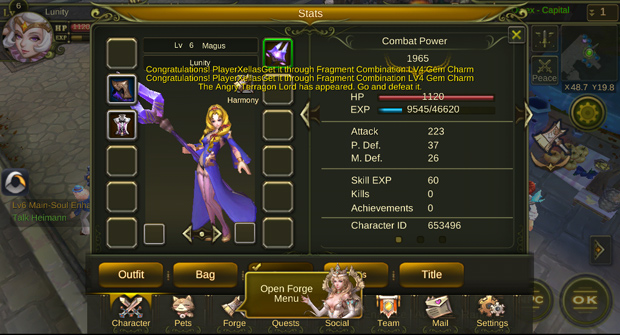 Unlike most mobile-based MMOs, anything you equip here actually gets displayed on your in-game avatar – weapons, headgear, shoulder armor, even certain special effects like auras and wings. There is a huge expanse of parts to collect and mix and match. This is quite notable because, boring as the game may be, the art isn’t too shabby. Character designs and in-game portraits are articulately detailed and well-done, and the 3D models are expertly rendered.

Another notable advancement for a mobile MMO is its support of a moveable and zoomable 3D camera. That said it’s kind of sad that this game would score more points with me as a simpler pet and fashion game than a standard MMORPG. But the game can’t even win based on aesthetics.

The interface is horribly cluttered. GMs and player shout outs often pop up in the middle of the screen and it gets hard to appreciate or even understand what’s going on when there are a bajillion things happening in-frame. Some text hasn’t even been fully translated as the game often displays loading info in Chinese.

One last good thing I can say about Dawn of Immortals is that it at least isn’t a “pay to win” business, meaning you can go through the entire game normally without having to succumb to shelling out real cash to access most of the game content and enjoy it (if you can).

It’s more of a “pay to spice things up” model type of freemium, where you pay to get more costumes, more pets to collect, and such – purchases that don’t really change your own personal meta of the game. And even though it’s an MMORPG, you are not forced to interact with the online community. 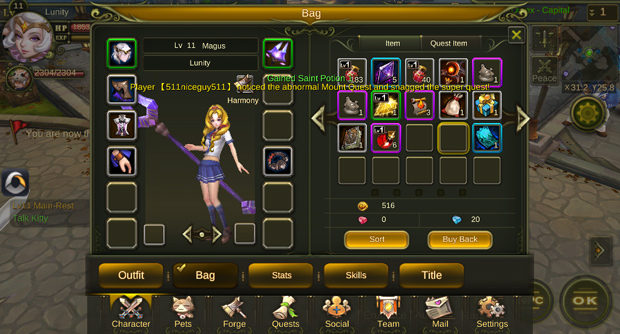 Though it doesn’t really hurt to try. Sure, the world chat box is annoying, but other aspects such as the auction house – where you get to buy and sell off your items and pets with in-game currency – are a good way to promote the online community feature of the game without having to bother you with social interaction. Because let’s face it, if you are playing an MMORPG on a mobile device, I am willing to bet this month’s salary and my left butt cheek that you’re not exactly the outgoing type. To some extent, Dawn of the Immortals can be considered as an online yet single player MMORPG, and that works well when dealing with the flexible needs of your everyday mobile gamer. 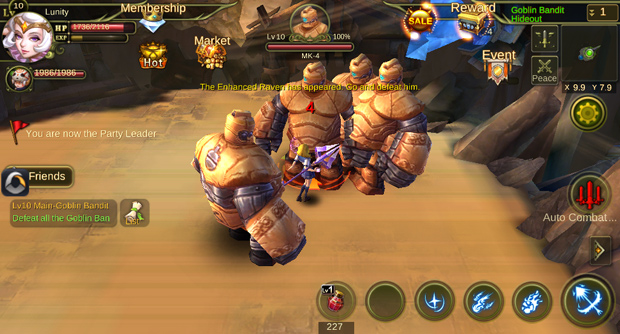 Conclusion: Fair (2/5)
As a game in itself, it leaves a lot to be desired, but that doesn’t mean its total trash. There are a few gems to be found while playing, though I really suggest that you pick this up if you want to get into the MMO scene but are really lazy or too casual to actually invest some hardcore effort into it.