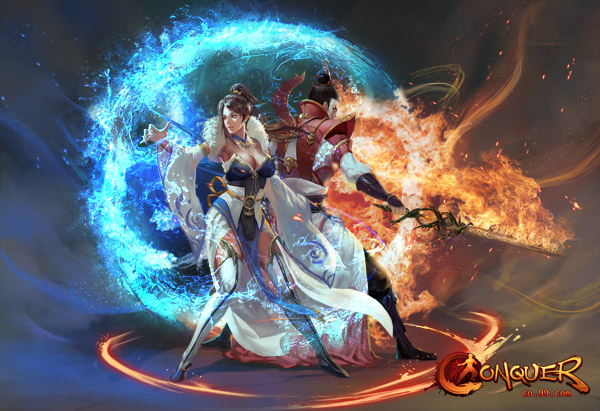 The CO team is welcoming the first big expansion of 2015, Taoists Ascending! Taoists are one of the most popular classes in Conquer Online (http://co.99.com/), especially to female players. Taoism is a religion of unity and opposites; Yin and Yang. The principle of Yin Yang sees the world filled with complementary forces – action and non-action, light and dark, hot and cold. As the master of abundant magic spells good at damage and buffing allies, a Taoist is needed in team battle.

NEW SKILLS:
The lotus is a powerful religious symbol of Taoism. Purity, divine beauty, resurrection, and enlightenment are all contained in this symbol. Man is rooted in the materialism, as Taoism believes, but with faith in the divine and adherence, he can emerge as pure and enlightened, just like the lotus. Therefore, the Lotus was chosen to name the two new skills for the Taoist: Aurora Lotus and Flame Lotus. When performing Aurora Lotus or Flame Lotus skill, a magical lotus will appear on the ground. The skill will be completely activated and give a deadly strike or give a strong buff if other players can’t wipe out the lotus in time. The third new skill is Nature’s Touch, a passive skill which needs to be performed with an epic weapon.

The Design Draft of the Nature’s Touch Skill

EPIC WEAPON:
The Taoist will be the third class receiving an Epic Weapon, following the Trojan and Ninja. The Taoist will get a new significant one-handed weapon, which is carried only by a master: the Lash of Impending Fate. The original weapon, the Backsword, will be upgraded.

The new expansion is set to be released in May. Let’s wait and behold the resurgence of the Taoist, with new prowess and an epic weapon! For more information about the new line, check out CO’s official website.