Black Gold is the up-and-coming title being brought to us by Snail USA. Using an updated and modified version of the engine that was used in Age of Wushu, we will experience a world where steampunk technology and fantasy magic clash. The game has two factions, the nature-loving and magic using Erlandir Union and the techno-steampunk Kingdom of Isenhorst. As opposed to Snail’s previous title, Age of Wushu, Black Gold will use a class and level system, with questing and other traditional MMORPG features playing a much larger role. The hope is that this more Western-friendly setting and familiar game mechanics will be more attractive to the North American/European crowd.

Before I continue, I want to stress that my experiences were within the alpha version of the game. This means what I write in this impressions article may not be true or accurate at a later date, and there’s a chance for changes to be made to the game.

Just like in Age of Wushu, you have quite a decent amount of customization. You can create the girl of your dreams, or that mutant guy from your nightmares. There’s pretty much a slider for just about everything you could think of. Heck, there’s even a boob size slider. About the only thing you might be able to complain about is the short supply of hairstyles to choose from.

That brings me into the races and classes. Right now, there are six races and four classes per faction (so a total of eight classes). The Kingdom has the human Buvont and Dwarf Lokemean, while the Union has the elvish Kosh and human Yutonian. The Upryian and Yuton races are not yet available in the Alpha version of the game. The classes fulfill the usual MMO archetypes: rogue-types, spellcasters, support, tanks, etc. If you’ve played WoW, or an other traditional themepark MMORPG, you’ll find the classes quite familiar.

Something you’ll notice is that the game looks great. Just like Wushu, there are a lot of amazing vistas to view, areas to explore, and you can have a lot of fun by just wandering around. However, I did feel that the Union areas were a lot more beautiful than the Steampunk zones. This is to be expected, as Steampunk is attributed as a dirty and gritty-type theme, but it also felt like the Kingdom zones were just of an over-all lower quality for the most part. I’m hoping Snail can do some touch ups to fix this. 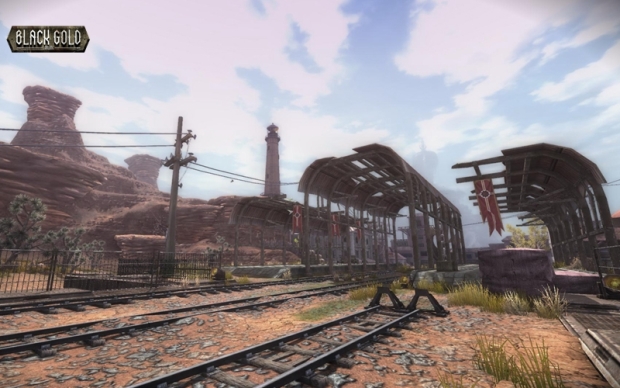 I really wish I could provide some screenshots, but due to the NDA, I can’t. When I first started playing, I rolled a dwarf assassin in the Kingdom and was a bit disappointed by the quality of the graphics. Later on, I rolled a human pyromancer in the Union and my mind was instantly blown as soon as I loaded in. The starting area for the humans in the Union is just plain amazing to look at. It definitely has a mystical fantasy feel to it, with a calm and homely nature. The architecture of the buildings in that area, combined with the music, remind me a lot of the Hobbit village in the Lord of the Ring films. 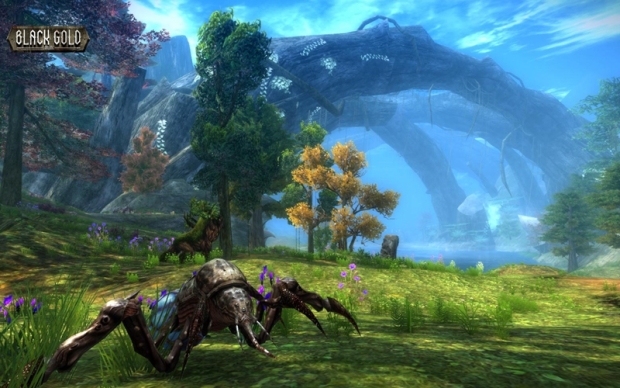 Something that will become apparent right off the bat is that questing is an important part of progression in Black Gold. Unfortunately, most of these quests are the typical-and-boring “kill X of Y” or “Gather X of Z” or a combination of both. The tediousness of these quests is slightly mitigated by the auto-pathing system in the game. There are also semi-spontaneous area quests that will appear that you and other players can participate in. For example, you might help hold off a horde attacking a city.

Generally, I was disappointed with the questing experience I found. The game is still in alpha, and there’s still hope that the Devs can take player feedback into consideration and change the game, but I don’t think that something that seems to be the core of the game will change much. I would have much preferred a modified Age of Wushu system, where you weren’t forced to do mind-numbingly tedious tasks in order to progress your character. I honestly think this new quests-driven progression will be something that a lot of former Age of Wushu players will instantly not like after having experienced the more fun and laid-back progression in Wushu.

Combat in Black Gold is tab-target with a bit of an action twinge. The “action” portion comes from the dodging function and the importance of facing your target, which means movement is a huge aspect of a fight. Other than that, the combat is quite similar to any other themepark MMO. Depending on what class you choose, you might be using energy, rage, or mana as your class “resource” for using your abilities. For example, as an assassin you’ll be using rage which is generated by using some attacks, such as your basic attack, and is consumed by using the more advanced attacks. Speaking of assassin, for those who like rogue-type classes, you can turn invisible. 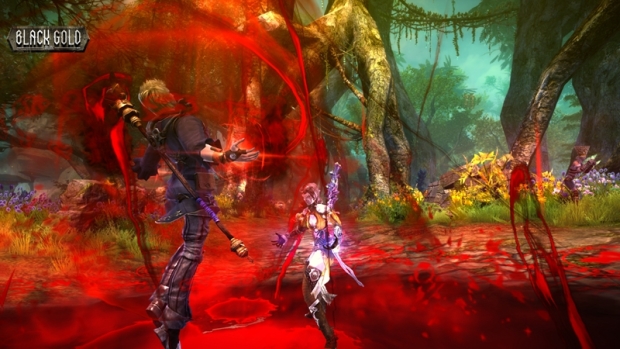 It seems like all attacks are “AOE” in nature. Even the basic attack of my rogue is capable of damaging multiple enemies in one swing. As long as they’re grouped up together and you can withstand their damage output, you can take out a group of enemies incredibly fast. This gives the combat a more intense feeling that kind of makes you forget that the combat is really just a tab-targeting system. Although, at least from what I’ve seen, the combat doesn’t have the same complexity as Age of Wushu, which is a bit of a let down.

Magic, and ranged combat in general, seems to be about the same as in other MMOs. It had a very nice feeling, and I found it a bit easier (and more fun) than melee. Of course, I tend to roll a mage as my main in a majority of games a play, so I may be a bit biased in that regard. There’s a mixture of instant, charged, and channeled abilities. One thing I instantly liked, and this is apparent for both melee and magic, is that enemies will sometimes literally be blown away when they die. It’s a bit mean, but there’s nothing more hilarious than hitting a rabbit with a fireball and watching it fly into a building or an NPC. 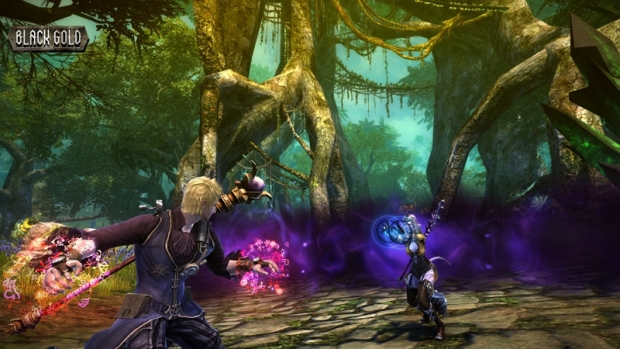 While I didn’t get a chance to participate in PVP during the alpha, I have been told that just like in Wushu, PVP will be a huge part of the game. It was even described as one of the primary end-game features. I wasn’t able to confirm it, but a few of the in-game alert messages I received gave the impression that there was a similar guild territory control system as Age of Wushu, guild bidding and all. It seems like the primary focus is taking control of special resource nodes. 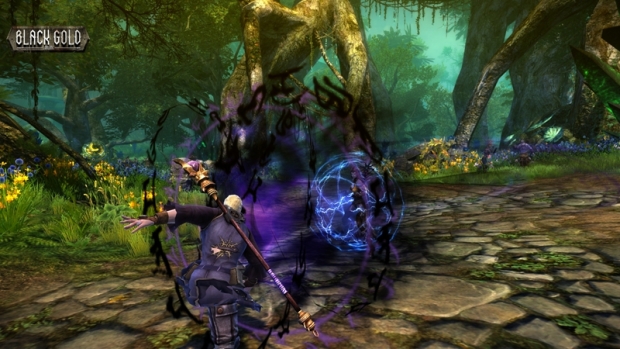 The crafting system seems to be similar to Age of Wushu in some ways. For example, there is a stamina system, which the professions in the game use. This means you’re limited to how much you can actually do per day which may promote the use of alts. It seems like high-end gear will make use of relatively hard-to-obtain materials, similar (once again) to Wushu. Crafting was one of my favorite experiences in Wushu, as well, so I’m looking forward to it in Black Gold.

In general, the gameplay in Black Gold had a clunky feel. The combat was difficult to get used to at first, as I found it sometimes hard to get my character to face the right direction in a fight. Sometimes, he would seemingly turn around in a fight for no reason (but perhaps that is some-sort of combat mechanic?). The mounts, especially the motorcycles (which you get very early on), seemed to be a bit stiff. Being able to do impossible turns, and even turning while staying completely up-right, on a motorcycle feels a bit weird and sort of breaks the immersion. However, this is an alpha version of the game and there will hopefully be a ton of polish done before the game is released.

Speaking of mounts, each faction has their own style of mounts. As you might guess, the Kingdom has steampunk-themed mounts, such as motorcycles or robotic wolves. On the other-hand, the Union has organic mounts which you might expect from a fantasy setting. These mounts do not allow for combat, however there are “battle vehicles” that do. 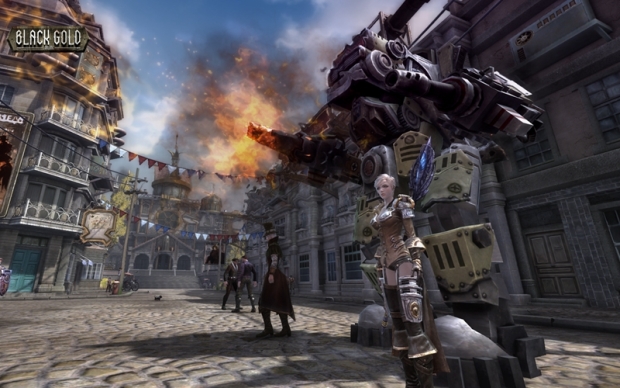 The level cap is currently set to 40, which doesn’t seem like it will take very long to achieve. I was able to get to level 20 in a relatively short amount of time. Perhaps the later levels will be significantly harder to achieve? Either way, the monotony of the leveling process will hopefully be broken up thanks to the hidden cave-dungeons, public events, and other similar features. More than likely, however, you will spend a lot of your time doing PVP battlegrounds, guild wars, open PVP, crafting, and instances.

Dungeons seem to be everywhere. There aren’t quite the same as instances, as they’re more like small caves that multiple people can enter to kill mobs and collect loot. There didn’t seem to be much story to them, at least in the earlier areas. I did like the abundance of them, as I felt like I was discovering something new quite frequently. You feel like an adventurer that is exploring a new place, which is something a lot of new MMOs fail to convey.

The Sands of Time

Some of you may be familiar with Snail’s experimental payment model for Black Gold. In this model, you essentially have to pay real money to gain access to some of the best stuff you picked up during your gameplay session once you log off. At least in the alpha, you got two free Sands of Time exchanges a day, which I guess makes it accessible to even completely free players. There were also hints of a “sand of time” auction, so perhaps players will be able to sell their sands to others for in-game currency. However, there also seemed to be a lot of different types of sands, and I honestly was completely confused about how the system worked.

A bit of tinkering made it seem like you could, depending on your accumulated “Treasure Value,” gain access to better items. Once you get your Sand of Time, you can right click it and either turn it into an enhancement item (which could be used on equipment) or a piece of equipment. Opening the Sands of Time interface lets you see what pieces of equipment of enhancement items you have a possibility of getting when you use the Sand of Time, and I’m guessing the higher your Treasure Value, the better stuff you have a chance of getting. There was a “Items in save file” list of items as well, but I had no idea how to actually get those items. Like I said, the system was just confusing and I wasn’t able to find any resources that explained it well, so all I had to go on was my own experimenting and best guesses.

Unfortunately, I wasn’t able to use any of my own screenshots for this impressions due to the NDA. Hopefully my writing will be enough to convey what I’ve experienced, and the screenshots I’ve provided will placate you. Black Gold seems to be shaping into a good game that fans of both the fantasy and steampunk genres can enjoy. Personally, I have great hopes for this game as I love the steampunk setting and I had a blast playing Age of Wushu. This is definitely a game to keep your eye on in the near future.