Aeria has had a whirlwind year of releases but perhaps they’re saving the best for last with their acquisition of developer X-Legend’s latest fantastic Anime MMORPG, Aura Kingdom. Drawing on the past success of titles like Eden Eternal and Grand Fantasia, and evolving with new technology that enables more advanced combat and customization mechanisms, Aura Kingdom is set to raise the bar on the kind of punch that an Anime-themed MMORPG brings to the table. In preparation for some upcoming pre-beta events we’re planning, I sat down with Spyra, Aura Kingdom’s Product Manager, to get a better grasp on just want kind of game they have in store for us. 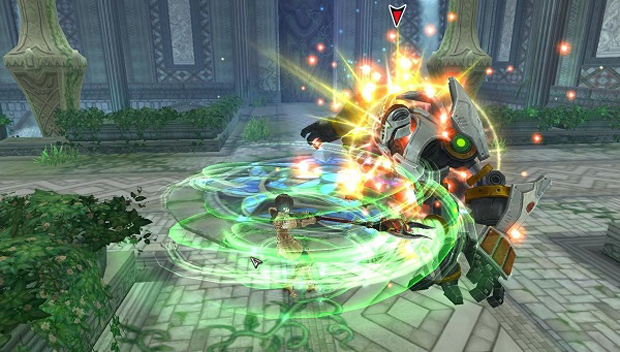 DizzyPW: Hey before we get started, let’s introduce who you are and what part you’re playing on the road to launching Aura Kingdom in North America.

Spyra: Hello, great to meet you! I want to first thank you for taking the time to talk with me today, and also thank all your readers for taking the time to read this interview. Within the Aeria community, I am known as Spyra, and I am currently the Product Manager (PM) for Aura Kingdom in North America. We actually hadn’t announced that yet to the community, but I guess the cat is out of the bag now! As a Product Manager, my primary focus is to help get Aura Kingdom up, running, and ready to be released to all our fans. We are well aware of the high anticipation from our community and want to thank everyone for their patience and support. 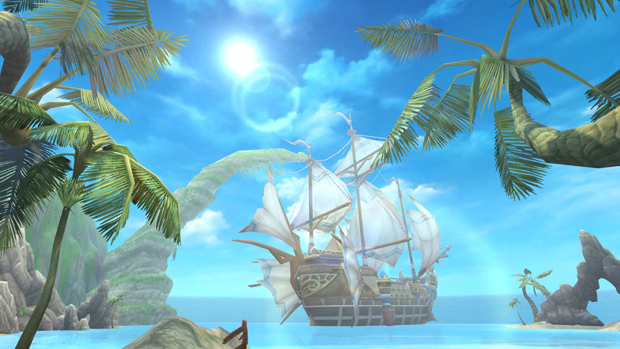 DizzyPW: Before we jump into the game, can you tell us a bit about X-Legend and their relationship with Aeria Games both past and present?

Spyra: X-Legend is one of the top game developers in Taiwan. Over the years, they have created some amazing quality titles like Eden Eternal and Grand Fantasia, both of which are still running very strong. Our relationship with X-Legend is great, and it’s because both companies passionately share a common interest: to provide the best gaming experience possible for all players. 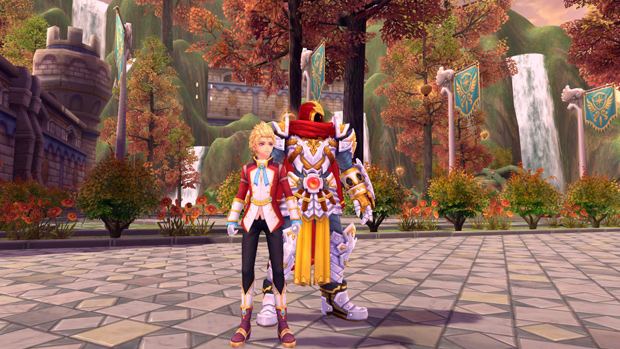 DizzyPW: Aura Kingdom seems to be the evolution of many of X-Legends’ past titles. The Eidolon system in particular reminds me a bit of Kitsu Saga’s pets. What are these critters’ role in the gameplay of Aura Kingdom?

Spyra: If you really look deep into the game mechanics, you’ll see how X-Legend has taken the best features from their past games, and made them work together really well in Aura Kingdom. The Eidolons are a great example of that. The Eidolons are not just pets, but more of a well-rounded companion. Not only will they fight alongside with you, but together the character and their Eidolon can create cool combo attacks, all with different animations depending on the Eidolon you battle with!

DizzyPW: Will players need to take part in actively building relations with these creatures? What kind of benefits will be waiting for excellent Eidolon trainers?

Spyra: Players will indeed have the ability to forge a bond with their Eidolon. Talking with your Eidolon can earn you points that you can use to get cool in-game rewards. Each Eidolon has its own unique personality that you’ll discover as you exchange dialog with them. As you adventure with your Eidolons over time, they will remember your past activities and will bring them up randomly during your conversation. For instance, I died once during an easy boss fight and since then my Eidolon has made sure that I do not forget that embarrassing moment. 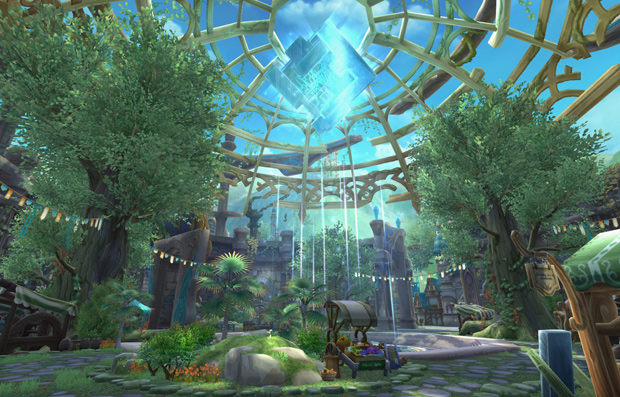 DizzyPW: Aeria’s forums are all abuzz right now over the Deity system. Are there any details you can confirm about this looking forward to the NA version? And are these different from the Eidolons?

Spyra: They are actually the same thing. The word Deity was used by Aeria’s community before our localization team decided to call these companions “Eidolons.”

DizzyPW: Ah that explains plenty. So these Eidolons seem to be inspired by mythology from various cultures. Will other areas of Aura Kingdom feature similar real world inspirations?

Spyra: For the most part, other aspects of the game besides the Eidolons tend not to borrow from “real-world” mythology. But as you mentioned, the Eidolons draw from an eclectic range of mythology from cultures around the world. For those who are more curious about this, our website is constantly being updated and we’ll be shedding more light on the Eidolon section very soon. 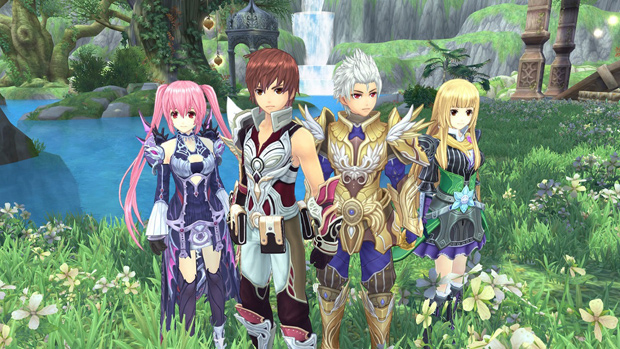 DizzyPW: Moving on to the class customization, Aura Kingdom seems to be reeling in the free form class system of Eden Eternal for a more structured base. Players must now stick to a primary class until a later point when they can begin learning a secondary class (and weapon set). How far should players expect to play before they can begin acquiring the secondary class?

Spyra: Whatever class the player chooses at the start will be permanent; however, every character can acquire an ability to learn skills from a secondary weapon. Currently, players will need to get their character to level 40 to unlock the ability to use a secondary weapon in Aura Kingdom. While it’s not quite the free-for-all of Eden Eternal, this still gives players a ton of versatility as they can essentially play the equivalent of any second class of their choosing. 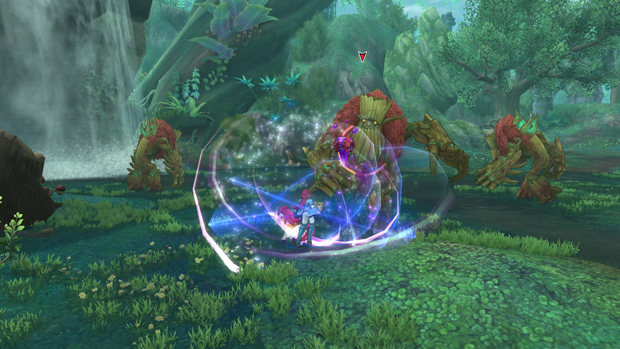 DizzyPW: Will there be limitations on how often a player can swap between classes? Or perhaps they can change between them in the heat of battle for more synergy?

DizzyPW: Let’s talk about the combat itself. Aeria has typically stuck to target and attack MMORPGs in the past. Aura Kingdom is branching more into the realm of an Action MMORPG. How is this being implemented into the game and how action intensive is Aura Kingdom compared to standard MMORPGs?

Spyra: Aura Kingdom is still a target and attack MMORPG, with a bit more action thrown in to spice it up. For example, certain mobs and bosses have different types of AOE abilities where players must move out of the way to avoid them or else massive amounts of damage will be dealt to the players caught in the assault. Another feature is that attacking the mob from behind will always do more damage than if you attack from the front, so being aware of your positioning is key.

DizzyPW: With this inherently built-in higher skill cap, do you see PvP playing a major part of the game? And will it be held to only arena-based combat or will more open world/faction systems be present?

Spyra: Since Aura Kingdom is not strictly an Action MMORPG, players do not need to have a very high skill cap to enjoy PvP. X-Legend is currently working hard to bring some fun and engaging PvP to Aura Kingdom, but since some of the major PvP content is still in development, we want to wait a little longer before sharing this with the community. 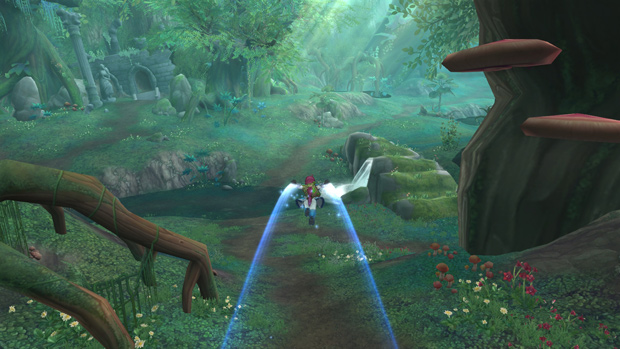 DizzyPW: With players having access to all this extra mobility, will you be implementing platforming elements to test their skill at getting into hard to reach places of the world map? Will certain classes have better mobility options than others in this regard?

Spyra: Every class in Aura Kingdom has the same mobility options. The gliding feature is a great skill not only for getting around the world at a fast pace, but with some ingenuity you’ll be able to reach places that aren’t accessible otherwise. We definitely have very important plans for the gliding ability, but we can’t quite share them just yet. 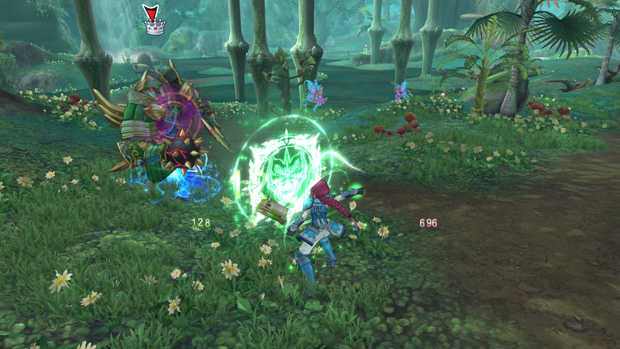 DizzyPW: Sorry to grill you with so many questions at once. I’ll wrap this up. One look at your community and its clear this game is going to have a more proportionately female population than your typical MMORPG. What elements do you think are driving this response?

Spyra: This is interesting! While the art style will naturally draw more players who are into anime, we have some cool in-game social features that are intended to keep all players engaged with the game. We believe that, as a result, the ratio of players will be more balanced.

DizzyPW: Thanks again for your time. On a related note, we’ve just opened up polling to choose the names of three important NPCs in the English version. Vote for your favorite now and Aeria will be choosing from the top ranking names and awarding the players fortunate enough to come up with these names. 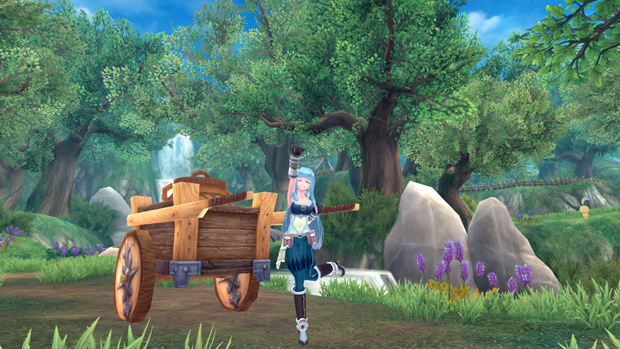 Spyra: Thank you Dizzy and everyone for your time. I hope to see you all in Azuria soon!