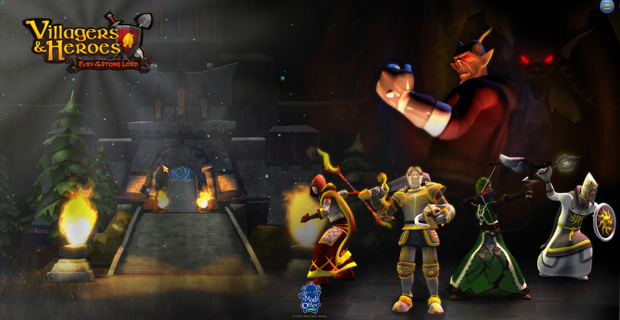 Villagers and Heroes is an MMO that many people have unfortunately never heard of. It doesn’t have the huge budget that Blizzard is afforded, or the commercial backing that DC Universe Online has with its long stream of comic book connections. It is its own world, both unique and interesting. With the emergence of a new graphics engine and its first expansion (The Fury of the Stone Lord), we have decided it needs a little coverage on the big things happening to the game. Villagers and Heroes has its own lore written, and I found a lot of what I saw to be entertaining, if a little hokey. Congratulations, Mad Otter Games! Truthfully, I had never heard of Villagers and Heroes (previously known as A Mystical Land) either until it was pushed my way for coverage, and I have to say, though the graphics still are not mind-bending, it was a sort of nice change of pace from all the high-dollar, time-consuming games that I have played lately. 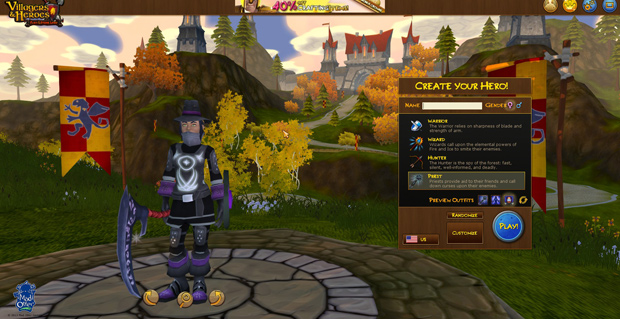 To give a little background on the game, you play as a person of high caliber that is one of four classes: Warrior, Hunter, Priest, or Wizard. Only Hunters and Wizards can attack from afar, but Priests and Warriors can buff their armor to combat this lack of range. Wizards and Hunters are fairly weak up close, but powerful from a distance. This is an active world with plenty to do, with a level cap of 65 that will increase again in a future expansion/patch. As with any MMO, there are also gathering/crafting skills you can gain, allowing you to expand your abilities. There are lots of options from Mining and Fishing to Woodcrafting and Cooking. These are pretty standard with any MMO, but I do like their approach. 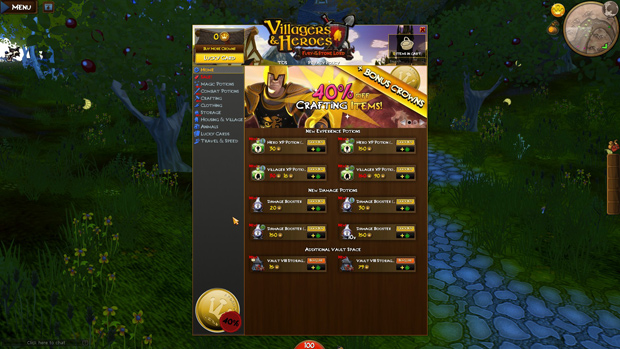 Now, as in most Free to Play games, there are microtransactions. The item shop is not something you necessarily need to spend money on, but if you are actively playing the game, and are getting something out of it, maybe it is not a bad idea. Are some things (such as crafting) a little slower? Yes, perhaps. You do not have to pay to win, but it is more like “Pay to Advance,” sort of like in a Facebook game where you spend a little money to make something build faster in your kingdom. I have heard a lot of talk on both sides of the fence. I have read on several forums that the game is pay to win; that you must spend real money on the xp potions, the crafting supplies, and the equipment in order to progress in certain zones, or else be forever stuck in lowbie zones slowly grinding in poverty. However, I do not know from personal experience playing, so I cannot be a judge, nor can I condemn something on hearsay. 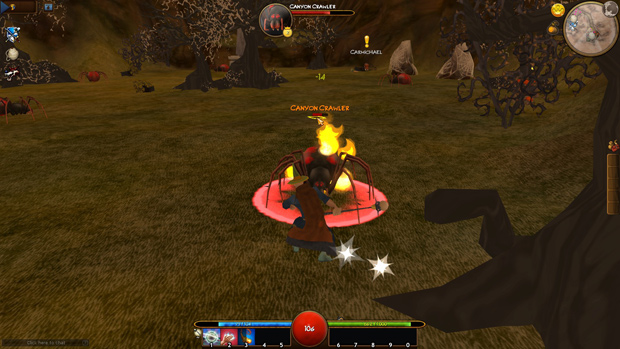 Originally, this was a game played in a browser. It had a fairly simple graphics engine, which allowed many people to play, whether they were on a Mac or a Windows machine. However, try as they might, the fine folks at Mad Otter Games could not make it work well enough on the Mac OS, so it was not an option anymore. They did apologize to Mac fans, and they did state they tried as hard as they possibly could to make this a reality. Now there is a client to download that’s relatively small by MMO standards. It loads pretty quickly, and while I feel bad for Mac users, I am certainly glad to be using a Windows machine! In some ways, this reminds me of other smaller games like Wizard101, but with more depth, and charm to it. 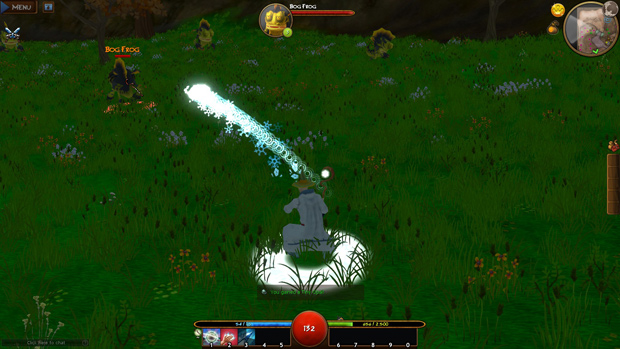 Let’s focus for a minute on one of the main draws of the expansion: the updated graphics engine. While graphics to me are not a big deal (I spend a fair amount of my free time playing retro vidya because I enjoy them), it represents a big step forward for this budding company, trying to make their mark on the harsh, unfeeling video game industry. Everything I read shows me they care about their fans, and are doing everything they can to make the play as enjoyable as possible. I will grant you the graphics will not remind you of Skyrim, or Final Fantasy XIV, but that does not appear to be what they are driving at here. 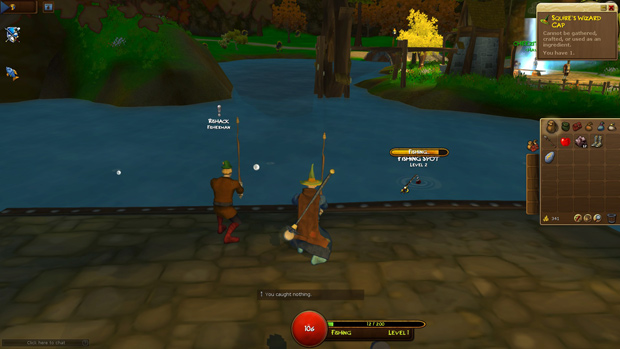 The character designs are even a little goofy, but maintain the style that sets V&H apart. They feel cartoony and light humored. I feel like the devs are trying to appeal to a more family friendly, casual environment with the style. Sometimes people just want a relaxing game where they can play and level with friends and family, without feeling like they are just at a second job, such as what World of Warcraft can feel like. But I do have to say, there are a lot of subtle additions to the graphics engine. For a simple game, they put a lot of effort in. Shadows extend as darkness spreads. Swimming animations got a little better. The flicker of candlelight is more pronounced. Leaps and bounds, Villagers and Heroes. Leaps and bounds. 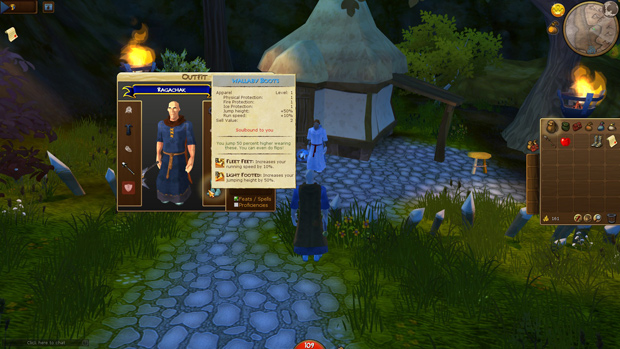 There are not a lot of customization options for your characters, but customization does exist. You can adjust between a few hair styles, skin/eye colors, and facial styles. It’s a pretty simplistic system, but I feel it lends itself pretty well to the style of game they are producing. The screen where you select your class/physical features also gives a bit of insight on to what playstyle will be like, and a preview of the types of equipment you will have based on what you choose (such as being a fire wizard or tending to go for ice magic instead). Again, it’s a simplistic approach, but one that can appeal to a fairly wide audience. Speaking of equipment, it does use a similar system of loot as many other MMORPGs by color-coding for rarity. It goes White, Green, Blue, Brown, from worst to best. Each piece is a little better than the last, with Brown (Remarkable) improving skills and spells by a rank. Crafted gear is better than the gear you might find in a dungeon, but not to such a level that you could not compete in damage. 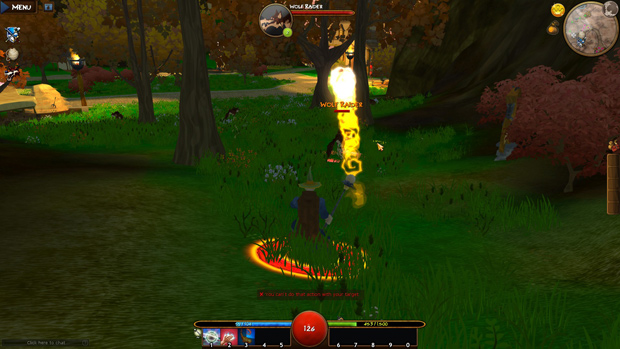 Combat is an important concern to anyone playing an MMO that revolves around defeating bad guys/mobiles. There are a lot of tweaks to the higher-level content new content that players should be aware of. There are new feats and spells offered to all classes with the new expansion, but while that is interesting, what really caught my eye was the changes to monsters of level 55 and higher. For each level above the player, the monsters have received a buff to their strength and intellect. If an enemy is two or so levels higher than a player, expect them to hit harder, resist more, and overall punish players attempting to fight something beyond their means. I really like this idea, so players cannot simply try and be sneaky, and make their way to the end a little faster. It forces players to have to coordinate together and fight with tactics should they wish to farm the big dogs.

The Pyrrus content will be more challenging than what the players have seen up until this point. In addition to simply being stronger, packs of enemies will start working together. Crowd Control like Wizards “Sleep” spell will become more prevalent and important, which to me makes it feel more like World of Warcraft, which is not necessarily a bad thing. In earlier iterations of the hit MMO, CC and order of kill was important; if a group did not control the stronger enemies, and take out what had to be taken out first, wipes were imminent. I feel like this is a fantastic change for the game. While it does still feel like a very relaxed, casual game, there is challenge awaiting people who wish to handle it. It is by no means necessary, but those who want it will not be lacking. The game still seems to care about focusing on its casual nature by making this massive packs stationary, allowing players to choose if and when to engage their challenge. Just keep your eyes open when exploring these new areas as it’s not always wise to leap into battle! 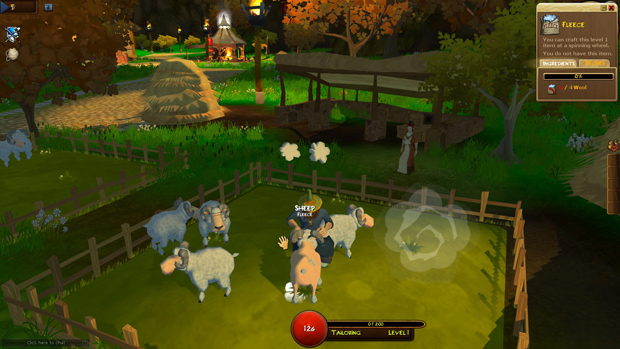 Conclusion: Up and Coming Hero

The debate of whether Villagers & Heroes is pay to win or not is pretty hotly debated. Doing a great deal of digging, I am still at a standstill. I hesitate to call this such, and instead label it as pay to advance. Sure, buying xp pots will help a great deal in any MMO, but from what I have experienced thus far, it has not been a necessity. I played WoW since Vanilla, DCUO since beta, and FFXI for years. The amount of time I’ve spent in Villagers and Heroes has been fun, but I really want to spend more time playing, as there is still so much to explore, and so much development awaiting the game in future updates. It has all the signs of one of those indie diamonds in the rough. I still feel this game has a long way to go, but I do applaud their effort thus far.

The graphics are a little goofy, a little cartoony, but I like the feel of it. It reminds me of a time when games were simpler, when we didn’t need 1080p, full 3D rendered graphics to enjoy a game. It’s nice to see someone using this style of graphical display. I’m certain if they could, they would probably choose something more powerful, but you get a comforting nostalgic feel as is. The graphics have improved significantly from the old engine as well.

The controls are solid. . . mostly. It is a standard MMO control system that is not terribly hard to get used to. Don’t fix it if it isn’t broke, I always say. However, I do have one major complaint. You use the mouse to hover over enemies and left click to auto attack. That has a tendency (for me at least) to have me stop attacking and walk closer. As a wizard, that’s not very good! It takes a little getting used to, but it’s not bad. I have never been fond of convoluted; fancy control schemes just to make something feel complex and intricate. There are times when you just want to Keep It Simple, Stupid.

I cannot really rate this so high just yet, because I have not seen all the features that it has to offer. There is no PVP, and from what I understand there won’t be anytime soon. They want the environment to be friendly and enjoyable; PVP tends to ruin that, turning people into savages. Their efforts instead are more focused than the typical MMO on crafting, gathering, and exploration, and it shows. I’m sure they’ll add more as time progresses.

The music is pretty catchy. The sound effects are nice and crisp, and the sounds of the game I’ve heard so far are appropriate for the areas. I’m a sucker for good music, and a good soundtrack can easily lure me in to play more. So, kudos to you guys. Even the login screen music is pretty fancy, and I found myself sitting and listening, taking my time in making my character to enjoy it. It does admittedly sound synthesized, but still, with a game that feels this retro and classic, I can enjoy it.