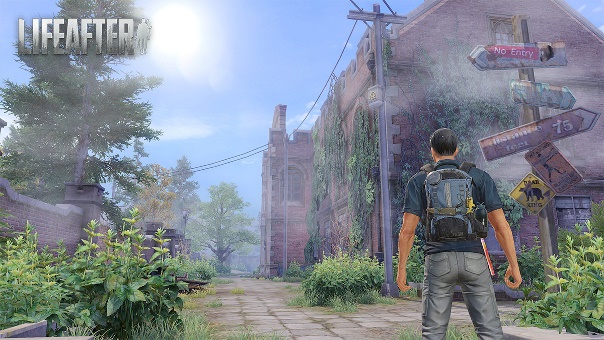 I know I don’t set any records with my boast of 1156 hours on 7 Days to Die, but I’d still say it’s a fairly respectable amount of time spent on a single title. It’s the game on Steam that I have the most hours clocked on. Suffice to say it is my love for zombie survival games that led to such an extensive playtime. I’ve never really taken enough of an introspective look at the game to decide why it is that I’ve spent so much time on it, but I will say that I’ve got some friends that I’ve been long in touch with because of 7 Days, so maybe the social aspect plays into it.

Whatever the reason that I enjoy zombie survival games, I do enjoy them. Titles like State of Decay and Dying Light have also kept me fairly entertained, and certainly have much better graphics than 7 Days, but they lacked the social element (for me at least, as I only played Dying Light’s single player mode). I’ve also played a few different zombie games on mobile, though if you asked me to name some of them, I’d be hard pressed. They all just blended into a sort of generic amalgamation of cash shop fueled ‘boring’.

Which is why I was pretty excited when the boss lady asked me if I wanted to review LifeAfter. This free-to-play mobile game from Chinese developers NetEase took the Asian market by storm, and released an English version late February 2019. It’s also the first zombie survival game played primarily as a third-person-shooter, rather than a turn based RPG style game, that I’ve encountered. Is LifeAfter everything I’ve ever wanted in a mobile zombie game? Not quite. However, I think that’s quite probably more of a me thing, and I’d encourage you to at least give it a shot for yourself, with some caveats.

One thing that sort of nettles is that this game, much like Rangers of Oblivion, leaves a little something to be desired in the cultural diversity section. Granted, the game was originally marketed by a Chinese company for a Chinese market, but you’d think that including more than two skin colors would be a relatively easy thing to do, and LifeAfter’s lacking in this department is fairly noticeable. All in all, the customization options are quite limited at character creation, but I think that’s because the developers want you to spend money on the extensive cosmetic selection available for Hope, their in-game currency which requires purchase with real currency. I don’t really know enough about Chinese culture to know if this omission is because of systemic racism, or just some sort of social blinders. Either way? Shame on you NetEase. Do better.

At least you get to choose your type of pooch.

The other thing that keeps me from being more enthusiastic about LifeAfter are the controls. Now, I’m primarily a PC gamer. I’ve played a few shooters on console, and I do okay on some of them, but for the most part I have a strong preference for keyboard and mouse in most scenarios. I mention this because I feel like the controls for LifeAfter would be much more familiar to someone who is acclimated to the use of a controller.

There is a virtual joystick, though you don’t have to thumb it directly in order to control your character, which I do like. Moving your thumb over most areas of the left side of the screen will engage in walking mode. The right side moves your targeting reticle. Now, something that makes this workable for a shooter is the fact that there is actually an action/shoot button on both sides. So if you want to run and gun you can tap with your right thumb while moving the joystick with your left. If you’re standing still and aiming with your right thumb, there’s a button to shoot with on the left. I found this to be a very endearing trait.

Additionally, you can fully customize your user interface. By going into the settings menu you can not only reposition every single button and panel, you can also resize most (if not all) of them. This gives you a great deal of luxury in setting up your screen to give you the most comfortable combination of view of the action and control. I find all of this very admirable, but it still just wasn’t a control scheme that I am used to, and so I think it largely put me off.

All I need is one big red button, and I’d be happy.

One final feature that I was rather pleased with in regards to the controls was the contextual tool/swap feature. You can click one button to open up a menu of all the tools you’re carrying on you, and then select the one you need, but if you’re out harvesting, you’ll find yourself switching a lot – especially if an enemy comes along. To this end, there’s a separate button which allows you to quick-swap between two tools/weapons. This is handy, but since you’ve got an axe for chopping wooden targets, like trees or tree stumps, and a pickaxe for breaking rocks, that still leaves you having to swap without a weapon in the rotation. Unless, that is, you use the contextual swap feature.

Whenever you go to harvest a wood or stone node in the game, that node is highlighted with a white outline. If you target such a node while holding your weapon, you’ll switch to the appropriate tool. If you finish chopping trees, switch to your weapon with the quick swap button, then point at a rock and you’ll equip your pickaxe with your weapon in reserve.

Alright, so, let’s go back to the beginning. After customizing your character, you’ll also pick from three different breeds of dog, each of which has its own customization features, such as markings and collar. Once this is done, you enter the game. You can choose to play through the tutorial, or opt out by answering some questions about the game. If you’ve done the tutorial before there’s really no reason at all to repeat it, as I don’t think you earn experience, and you don’t keep any of the gear you find. That being said, it is definitely good to go through the tutorial experience at least once. For one thing, there’s useful instructions on how to play the game.

There’s also a fun bit of prologue type story, though I’m still confused about the name of one character. He’s called alternately Razarove and Lazarov. I mean, this is a pretty silly little thing, but it’s jarring trying to figure out who they’re talking about when they start mentioning him as Lazarov after calling him Razarove for the first several times, and kind of “amateur hour”, all things considered.

This is just one example, but it actually goes back and forth between calling him Razarove and Lazarov throughout the tutorial.

After the tutorial you find yourself in Hope 101. This is a small settlement of survivors who have banded together to stave off the “infecteds” as they’re called. You meet a woman named Rachel, who you find out was the one that organized your rescue during the tutorial, as well as a few shop owners, before making your way to Justin, the town’s mayor. Justin explains that the town needs you to be a sort of pioneer out in the development region, and offers you land on which to build your homestead, if you’ll help keep the zombies out of that area. 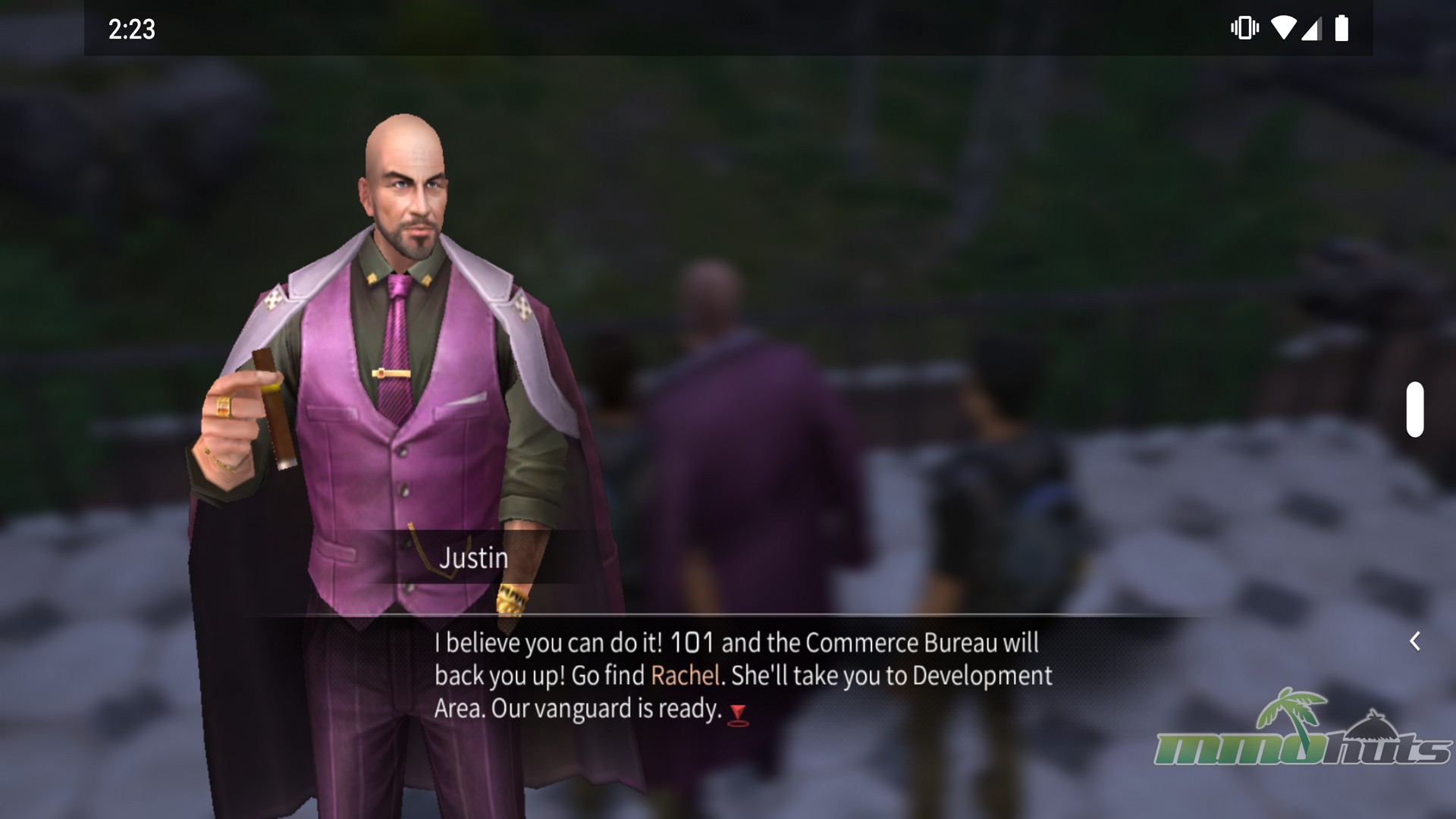 If it looks like he’s about to make you an offer you can’t refuse, it’s because he is. Unless you just don’t play the game, that is.

You do some building in the tutorial, but it’s here that you’re given autonomy. You can’t build a very large place initially, but as the game progresses you can upgrade both the size of the grounds you can build on, as well as the quality of building materials you can use. You can also grow plants here on your base in small garden plots, if you can find seeds for them. This is also where you’ll set up workstations that allow you to construct structures for your base, cook food to sustain yourself, build weapons, including firearms and ammunition, and even to research new formulas using formula shards.

After a little poking around the base, you’ll be raided by zombies. This is where you can reach out to fellow players for help. They’ll show up during the fortification phase, while a countdown timer ticks on. Then you’ll fight a few infecteds, probably with a bow and arrow at this point, before moving on with your gameplay. It is also at this point that you’re given a survival manual, which works as a sort of extended tutorial.

As you follow the steps you learn about the nuts and bolts of gameplay in LifeAfter which basically amounts to, “Stay warm, stay fed, harvest materials in the wilderness zones and air-ship them back to your base so you can build better defenses.” And yes, staying warm and dry does matter. Failure to do so results in gradual health loss from hypothermia, and being wet can make you unable to sprint. It can also result in catching a cold, which will extend the lack of being able to sprint, even after you’ve warmed up and dried off.

I will say that the graphics on LifeAfter are pretty impressive. In fact, they’re better than games like H1Z1, 7 Days to Die, or Rust, by a pretty long sight, which is amazing for a mobile game. Unfortunately, this leaves it in the realm of “all flash and no bang” for me. There’s also an integral VOIP system within the game that relies on your phone’s speaker and headphones. The time that I was teamed up with another player, however, they were speaking a language that wasn’t English, or even Spanish. Given that I’m on a North America server, this was a bit frustrating, but, well, welcome to the internet, I guess.

Again, seeing as I felt like I was fighting against the controls, which really reduced my engagement, I’m loathe to suggest to anyone else that the game isn’t fun. I think for some people that LifeAfter is going to fill a much needed niche in the mobile gaming world. For me, however, it just leaves some boxes unchecked. Despite this, I give it a solid 3.5 out of 5 brains. It’s got some impressive features for a mobile survival game.