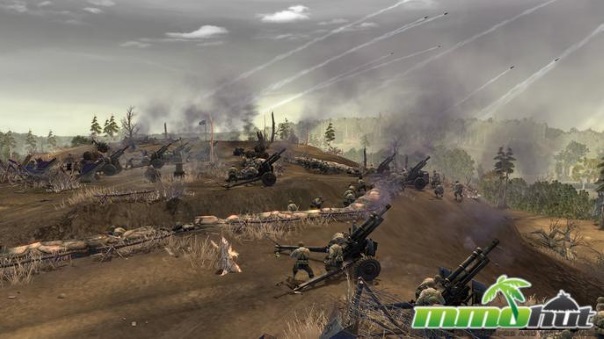 Console gamers have grown accustomed to the never ending deluge of World War 2 games, but now free to play MMO fans are getting a taste of the Third Reich. A string of new free to play MMOs set during this time period are about to be released. These games are developed from all corners of the world, from North America to Russia to Korea so its not just one studio planning the conspiracy. No doubt the era holds plenty of gaming potential. A huge war that engulfed all of Europe (and the Pacific) and gave us history’s first major aerial and armored battles is the perfect setting for a variety of genres including FPS, and RTS. Below we’ll take a look at some of these upcoming games then discuss why some other major wars don’t get their fair share of video game love. 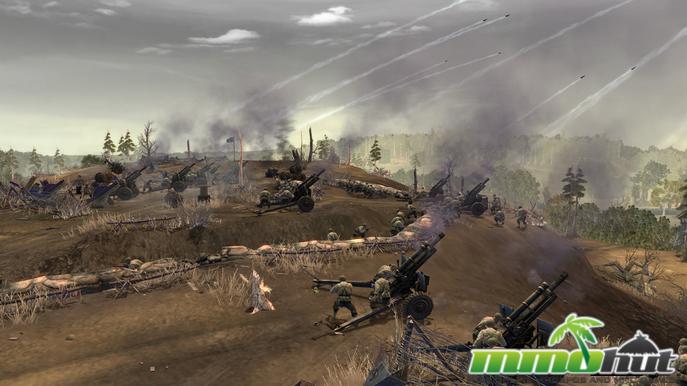 When most gamers think ‘real time strategy’ they imagine resource gathering and slowly building up a base. Relic Entertainment has shaken the genre with its Warhammer 40k Dawn of War and Company of Heroes series. Their fast paced take on the RTS genre focuses on units vying for control of strategic points that continuously replenish resources. Aggression is encouraged and turtling only leads to falling further behind. Company of Heroes has earned high marks and won a large following using this gameplay method and now free to play gamers will get to experience it! Company of Heroes Online has the same high production value and graphics of previous CoH titles, but will be free to play! The game is scheduled for release this fall, check out more on COHO on our preview page. 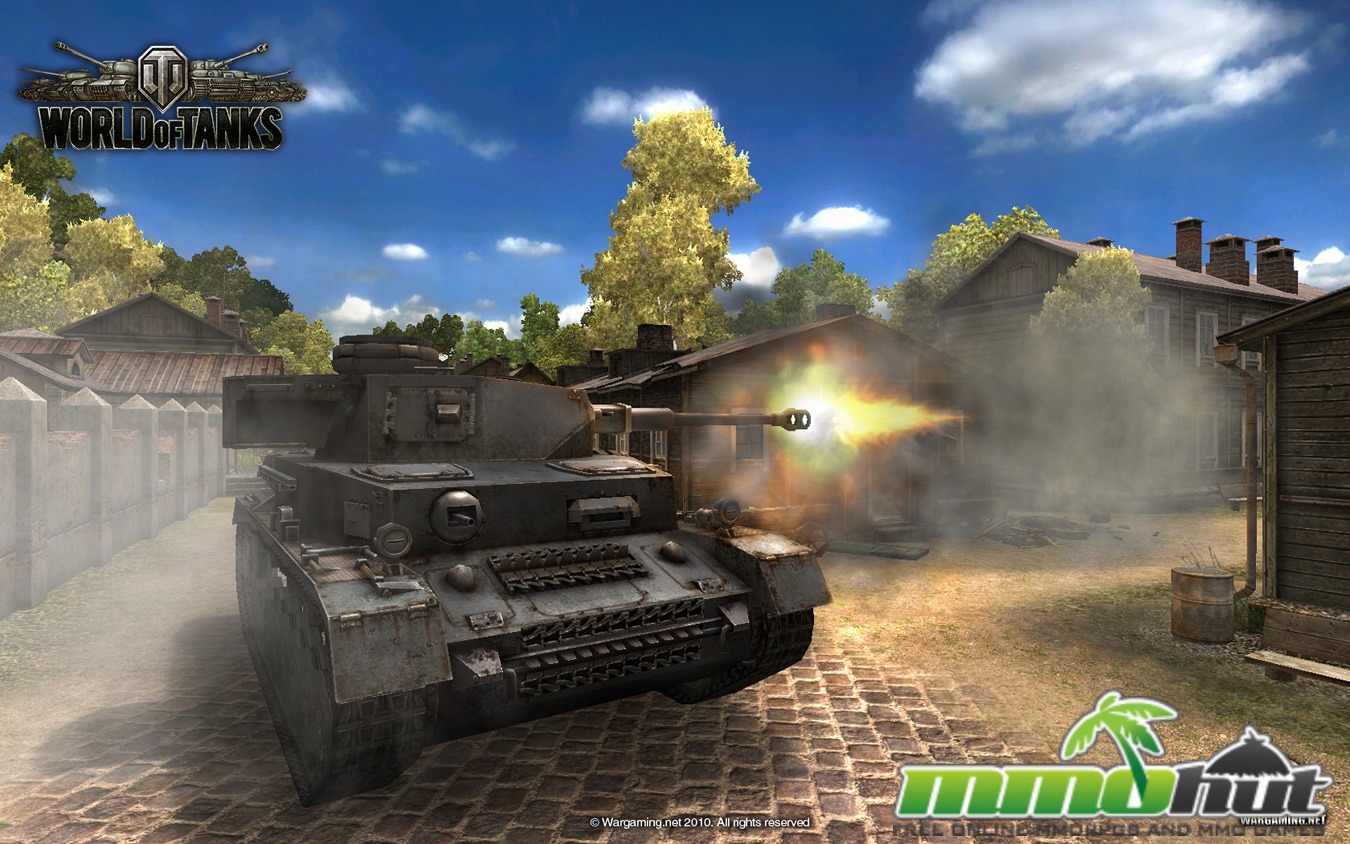 Many shooters like War Rock allow players to drive tanks, but they usually play a periphery role. Not so in the upcoming World of Tanks. WoT puts armor in center stage by allowing players to relive the large-scale tank battles of the second World War. World of Tanks is a team based game that offers over 150 armored vehicles from the American, German, and Soviet arsenal. Historic accuracy and high quality, realistic graphics set the game apart from the competition. But historic accuracy won’t get in the way of gameplay. Players will be able to upgrade their tanks with new parts and weapons as they progress. Each type of tank will handle differently, and the massive 30v30 battles mean each team will need a balanced composition of light, medium, and heavily armored vehicles. The studio behind World of Tanks has released several other historic war games in the past, but this is their most ambitious project to date. As a huge fan of the tanks in Battlefield 1942, I can’t wait to give World of Tanks a test drive. 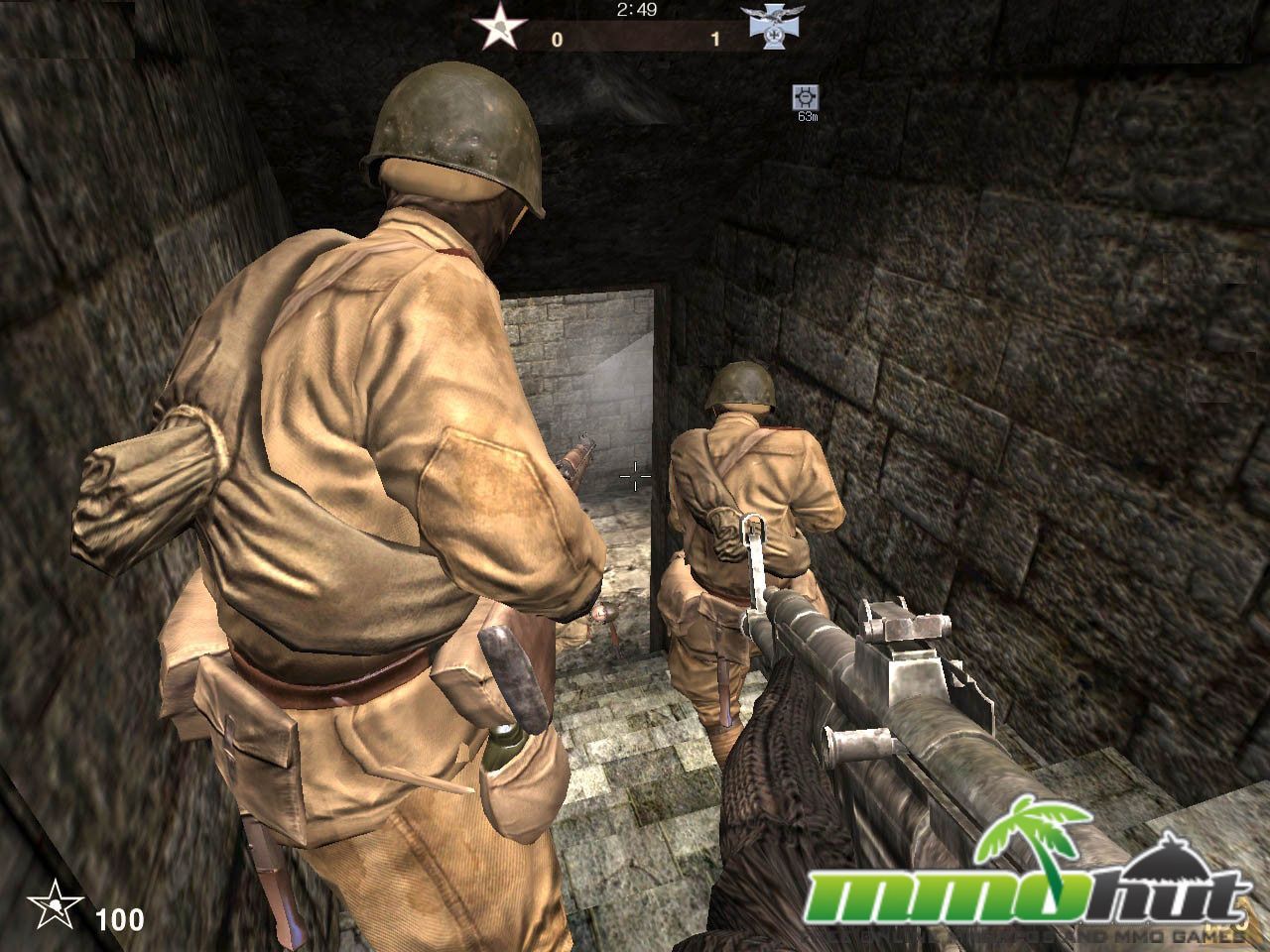 The War in Europe takes a strange twist in the Korean developed KARMA: Operation Barbarossa. The Germans never lost the war, and continue to ravage the continent. Players from both sides have to contend with the opposing nations, but also with the undead! That’s right, zombies roam war-torn Europe and don’t seem to discriminate between Axis or Ally. The game offers four classes or roles to play as, and players can switch between them between rounds. Karma: Operation Barbarossa is a team based first person shooter, so its important for each side to maintain a balance between the four available roles: Sniper, Assault, Heavy Weapons Specialist, and Support. Expect varied maps and game modes. The whole zombie aspect means we can expect modes like Quarantine from Combat Arms or Mutation from Cross Fire. Karma was scheduled for release back in 2009, but seems to be in deep freeze like IJJI’s other coming-soon MMOFPS, Huxley the Dystopia.

4. Heroes in the Sky 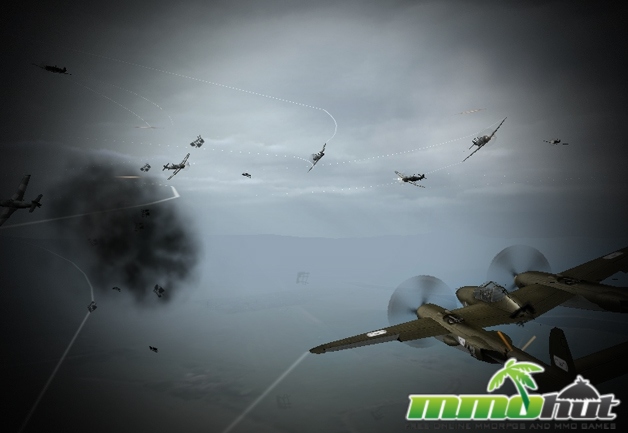 In Heroes in the Sky, the fight takes flight! Dogfights, bomber squads, torpedo planes, its all here. Since Aeronauts closed down, the sci-fi Ace Online has been the only free to play aerial shooter. Heroes in the Sky will change all that. The familiar WW2 theme means plenty of planes of British, American, Germany, and Soviet design will find their way into the game. Heroes in the Sky boasts realistic graphics, and allows players to fight on massive maps. Some battles take place over land while others are set over the ocean where player will have to contend with war ships. While several past war games do allow players to fly planes, Heroes in the Sky is entirely focused on aerial combat. The game entered closed beta testing on June 10, 2010. MMOHuts has been giving away beta keys so grab one and earn your wings soldier! 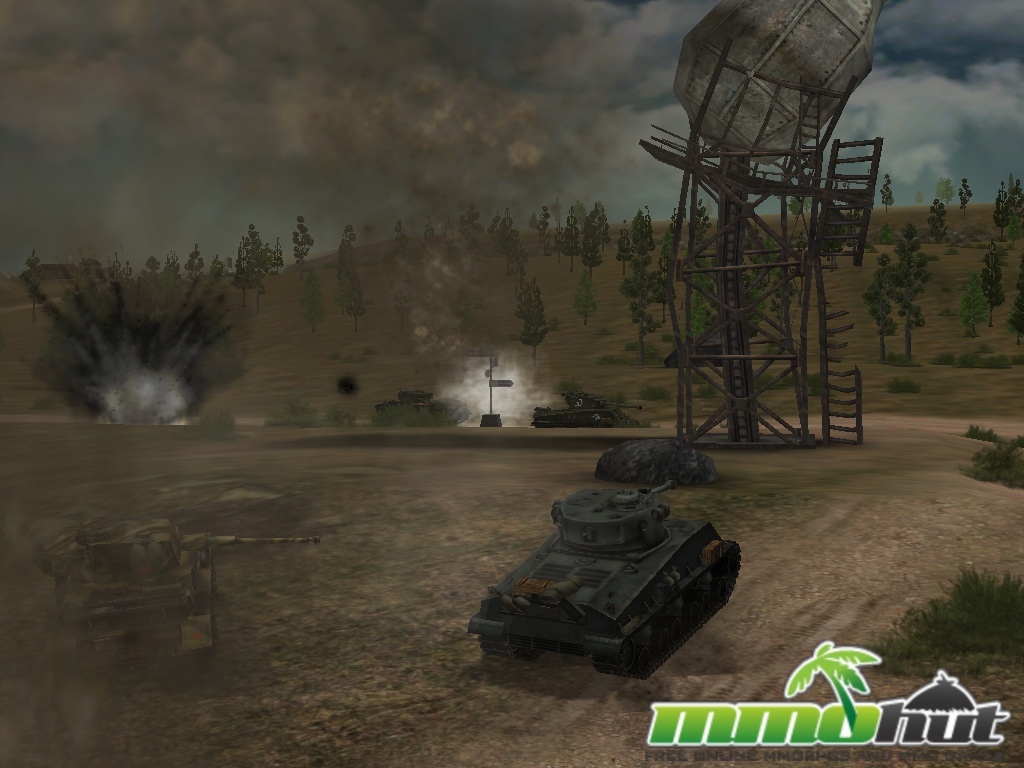 GamesCampus is a free to play portal best known for their sports MMOs like Shot Online and MLB Dugout Heroes, but they have recently made a big push into war games. Tank Ace is a 3D WW2 tank shooter that strives for realism. In many ways, it is similar to World of Tanks so tank fans will surely be in for a treat this summer. Players will be able to customize their vehicles with individual parts such as turrets, tracks, and armor for each individual part of their tanks! Features include over 10 different hit boxes on each vehicle, and support for various camera angles including driver, commander, and scout. Individual skill plays a large role in Tank Ace, but the massive battles also require teamwork. While still in development, Tank Ace has already gone through a first round of closed beta testing and a second should be on the way soon. 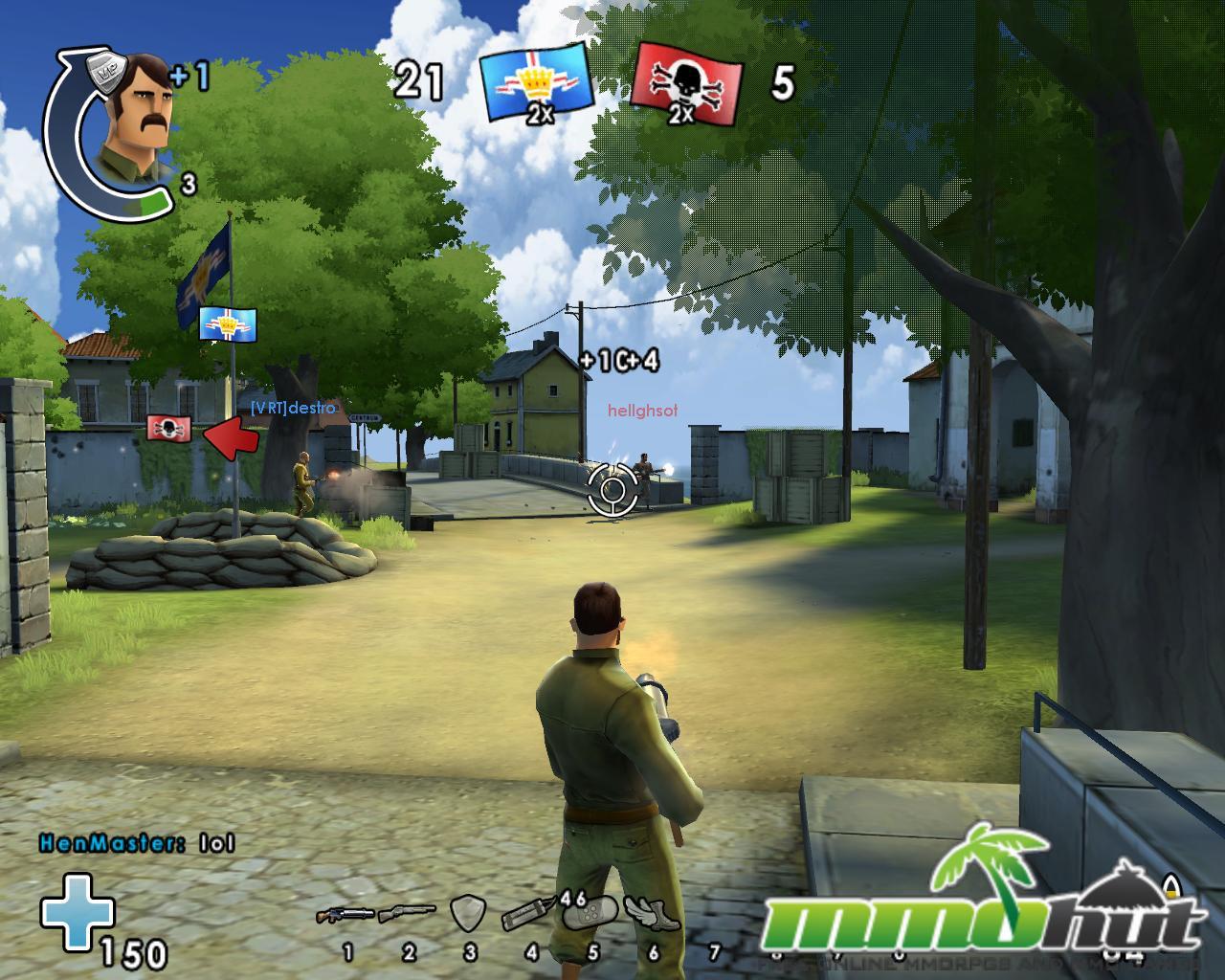 Those are some of the upcoming free to play World War 2 themed MMOs, but let’s not forget the ones that are already available. Battlefield Heroes fits the description despite the animated graphics and humorous atmosphere. Also included are Navy Field and Blitz 1941, two 2D MMOs. Surprisingly few FPS games made the list. Am I forgetting something or have modern tactical shooters dominated the F2P scene? When will we get a free to play WW2 Call of Duty game? 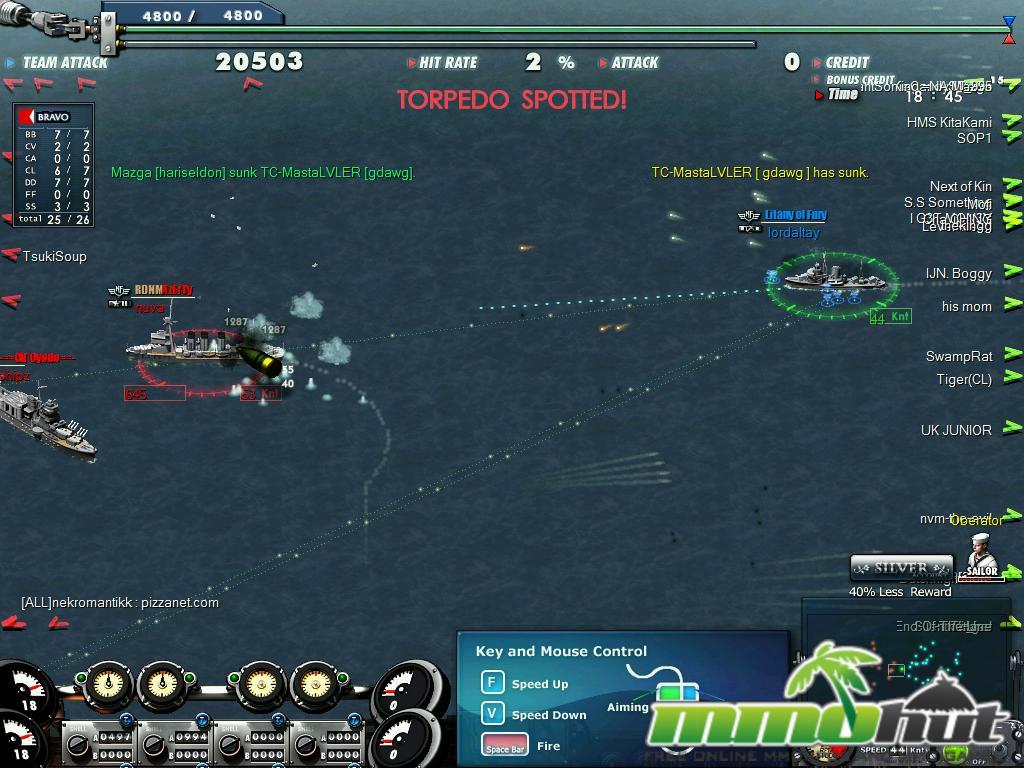 And now to the question on everyone’s mind, why WW2? Why do we see so many games based on this war? What’s wrong with World War One? The Germans were still the bad guys and the Americans, Brits, and Russians were the good guys. Trench warfare would be pretty cool, but I suppose ‘camping’ would be an even bigger problem than it is now. So what about the American Revolutionary or Civil War? What do you guys think, what war would make a good MMOFPS, MMORPG, or MMORTS? Or should developers stay away from ‘real’ wars and stick with pretend near-future conflicts like the one between Russia and the EU in Alliance of Valiant Arms?