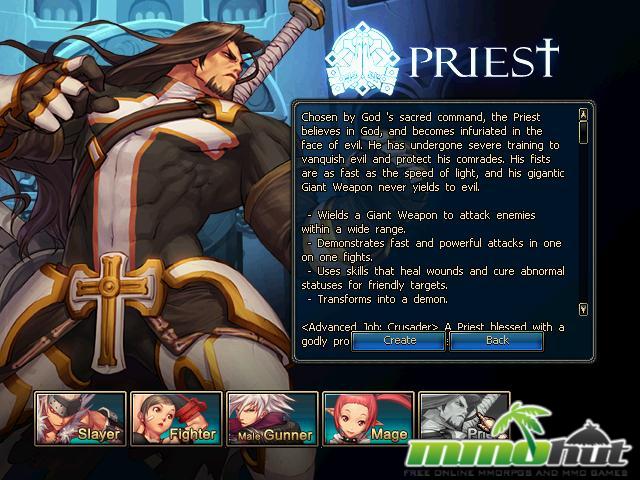 Dungeon Fighter Online was developed by the Korean studio Neople in 2005 and originally went by the name ‘Dungeon & Fighter.’ More recently, Nexon has picked up the game and has decided to bring it to the North American audience. The game entered closed beta testing in July 2009 and has opened its doors to all players as of September 15. Dungeon Fighter is an interesting blend of old and new concepts; it has many of the traditional fantasy MMORPG features we’ve grown accustomed to, but mixes them with fast-paced, classic beat ‘em up style gameplay found in oldschool console titles such as Double Dragons and Streets of Rage. The game is similar to the now defunct Pi Story, but has a more mature art style.

Oddly, Dungeon Fighter Online must be launched from the official website. Clicking the desktop icon that’s created during the install process only opens the browser and takes players to the site where they can log in and click ‘Play Now’ to launch the game. There is currently only a single server available titled ‘Cain’ with over a dozen channels. As with their other titles, Nexon can be counted on to add additional servers as the need arises. The character creation process in Dungeon Fighter is very simple; there are six classes to choose from with no appearance customization options available. Players can’t even select their gender; Fighters, Gunners, and Priests are male while Slayers and Mages are female. The thief class, has not yet been added, but will be available after a scheduled update. Each class has a unique introductory story line presented in comic book form, which is worth reading through. 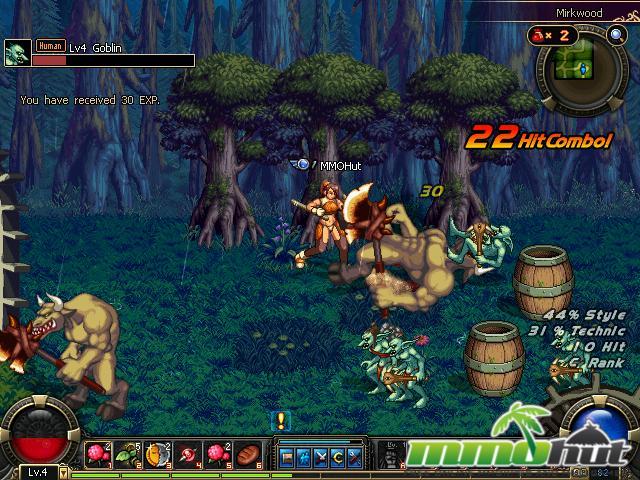 After the intro story, players find themselves in a forest and must save a young woman from a group of sleeping goblins. This simple task serves as the game’s tutorial by explaining the controls and introducing players to the gameplay style. The keyboard takes center stage in Dungeon Fighter, the arrow keys control movement while hotkeys activate attacks, abilities, and consumables. The graphics are two-dimensional, but players can move up and down as well as left and right. The best way to describe both the visuals and the gameplay in Dugeon Fighter Online is by imagining an old console side-scrolling beat ‘em up like Golden Axe for the Sega Genesis. Those who have played Lunia will feel the familiarity between the two games despite radically different art styles and a different camera angle. Dungeon Fighter’s resolution is stuck at a paltry 640×480 and with no option to play the game in windowed mode, players with large monitors are forced to endure severely stretched out graphics. The few options available in the settings menu allow players to disable the sound, music, and dialogue but little else. Players walk quite slowly but can double-tap the arrow keys to dash inside dungeons. A large town serves as the central hub from where players accept various quests from NPCs, train their skills, and form parties. This town is broken into several areas with the starting area called Elvenguard. The type of quests players are exposed to here serves as a good sample of what to expect throughout the game. It’s always best to talk to all NPCs nearby and accept their quests before heading into a dungeon, since most quests can be completed simultaneously. One NPC may ask you to kill 10 of a certain monster and another may ask you to collect 10 items from the same dungeon. Efficient quest completion in this manner is the best way to level up, especially as a solo player.

The first few dungeons are repetitive both in appearance and with respect to their inhabitants. You wouldn’t believe how many shades goblins come in. There are standard green goblins, red goblins, blue goblins, stone throwing goblins, mage goblins, dark green goblins with short scythes, and so on. Several other monster types make an appearance (including minotaurs!), but the forested environment stays the same for the first dozen levels or so. Before long players will graduate from Elvenguard and make their way left towards Hendon Myre, the next major area of town. Here there are a dozen NPCs with quests that revolve around the Grand Flores area, which has many dungeon stages available. Each dungeon can be thought of as a stage or maze depending on your perspective. Like in NosTale, a grid-like minimap is available on the top-right of the screen that helps players guide themselves towards the boss at the end of the level. Players receive large experience bonuses for completing stages and are also graded on their performance. Technique and Style are two important factors in determining a player’s grade and are even requirements for certain quests. Many of the missions require players to complete dungeons within a certain time limit, achieve a minimum grade, or avoid getting hit more than a certain number of times. From my experience these sorts of quests are extremely difficult to complete alone since dungeons are designed like mazes with several dead ends. A party is much preferred in these situations and comes with several other advantages; including vastly improved experience bonuses. 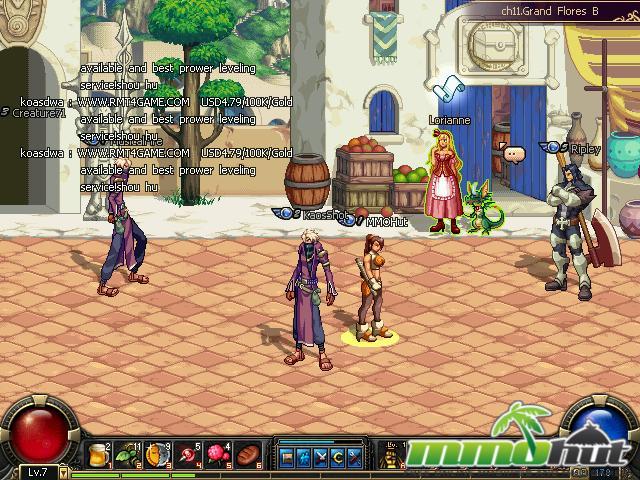 Play Together or Die Alone

Dungeon Fighter Online is an MMORPG, but new players may forget that fact during the first few stages of the game. The game’s quest system does a good job of keeping players moving along from one dungeon to the next, perhaps too good of a job, since players won’t want to take the time to form a group. Obviously there are exceptions to this – if you’re playing with a group of friends or if you’re a serious completionist who doesn’t want to skip the few quests that require multiple players. There’s no problem with playing alone for the first dozen levels, at least with your first character, since it serves as good practice. Eventually, teaming up becomes much more attractive since the solo experience rate grinds to a halt. The bonus experience players receive at the end of a stage is multiplied depending on the number of players and larger groups can even access special ‘super bosses’ in certain dungeons. Most importantly, grouping with others allows players to complete dungeons much faster and keep the game from getting stale. For those looking for a different kind of player interactivity (namely PvP), Dungeon Fighter Online offers an arena feature. Players must be at least level 10 to participate in the arena, though there are several channels each with a different level range to keep matches competitive. Dungeon Fighter’s main attraction, however, is the fact that it can be played in small bursts at a time with friends or alone. Gamers looking for a bit of nostalgia or a quick fix should definitely give the game a try. Dungeon Fighter Online may be another side-scrolling game by Nexon, but it plays very differently than MapleStory.

Dungeon Fighter is a fun, action-packed game with low system requirements. The retro gameplay is a treat for fans of classic beat ‘em ups, but players craving more modern visuals may be disappointed. A robust quest system keeps the game well-paced, but repetitive stage designs can cause the game to get tedious.