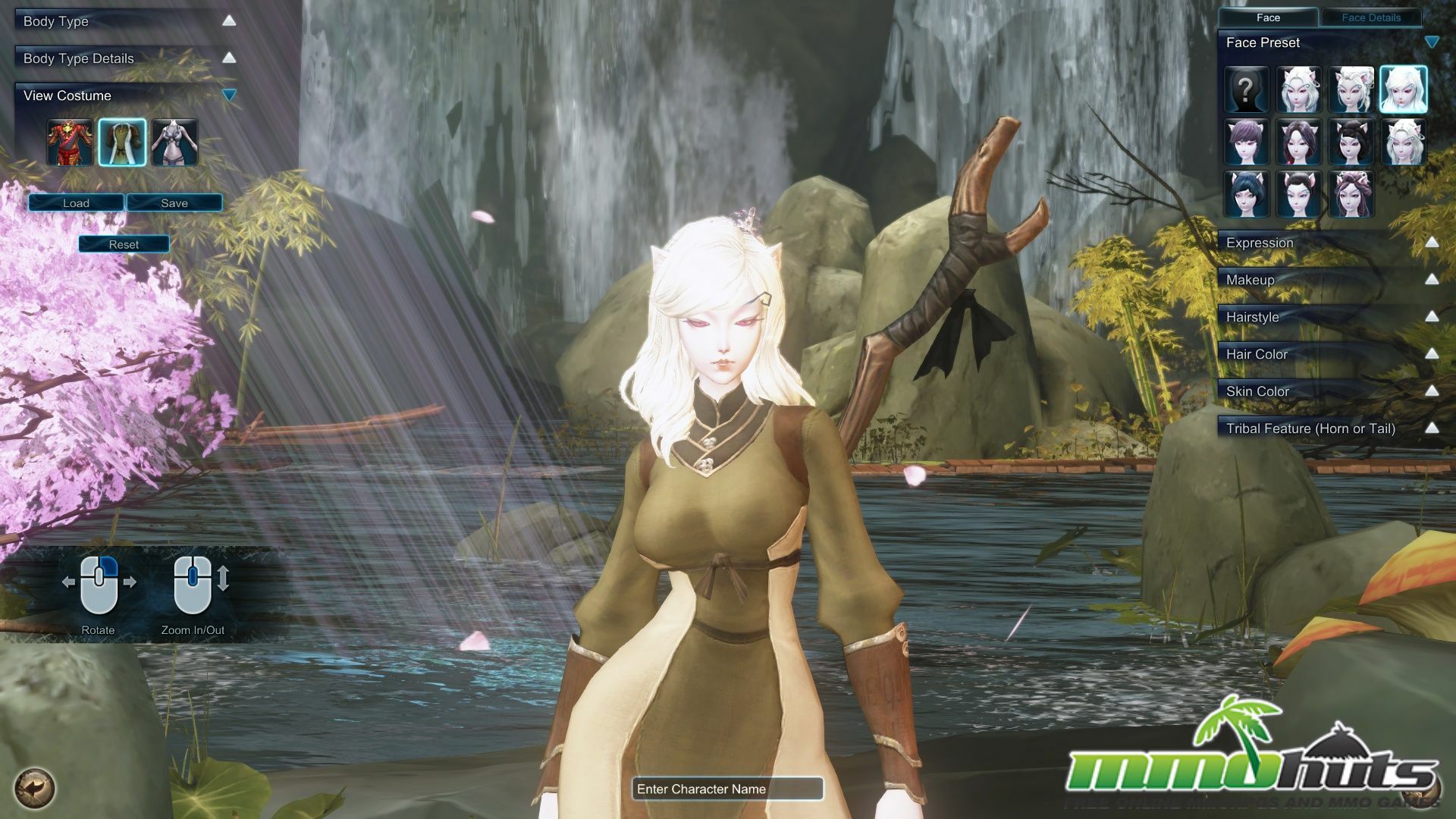 I have no idea what ASTA means. It’s been really bugging me, too. A few years ago, ASTA was being called the Asian World of Warcraft, but apparently it didn’t do so hot. That’s neither here nor there; I didn’t play it in Korean, so I can’t say one way or another. But, it is coming to America where maybe it will get a different shake. Webzen’s working on it as we speak, preparing it for an American audience. One thing I think will do well over here is the Asian Mythos overtones. That sort of style is pretty popular among a variety of people, and it will stand out among the other MMOs for that reason; sure, it is similar to WoW in that it has two factions warring against one another, but it is visually different with the bright colors and distinctly Chinese/Japanese art/character styles. I definitely see roots of World of Warcraft and Guild Wars 2 in it, but those are wildly successful MMOs. To want to emulate things that made them successful is no crime. 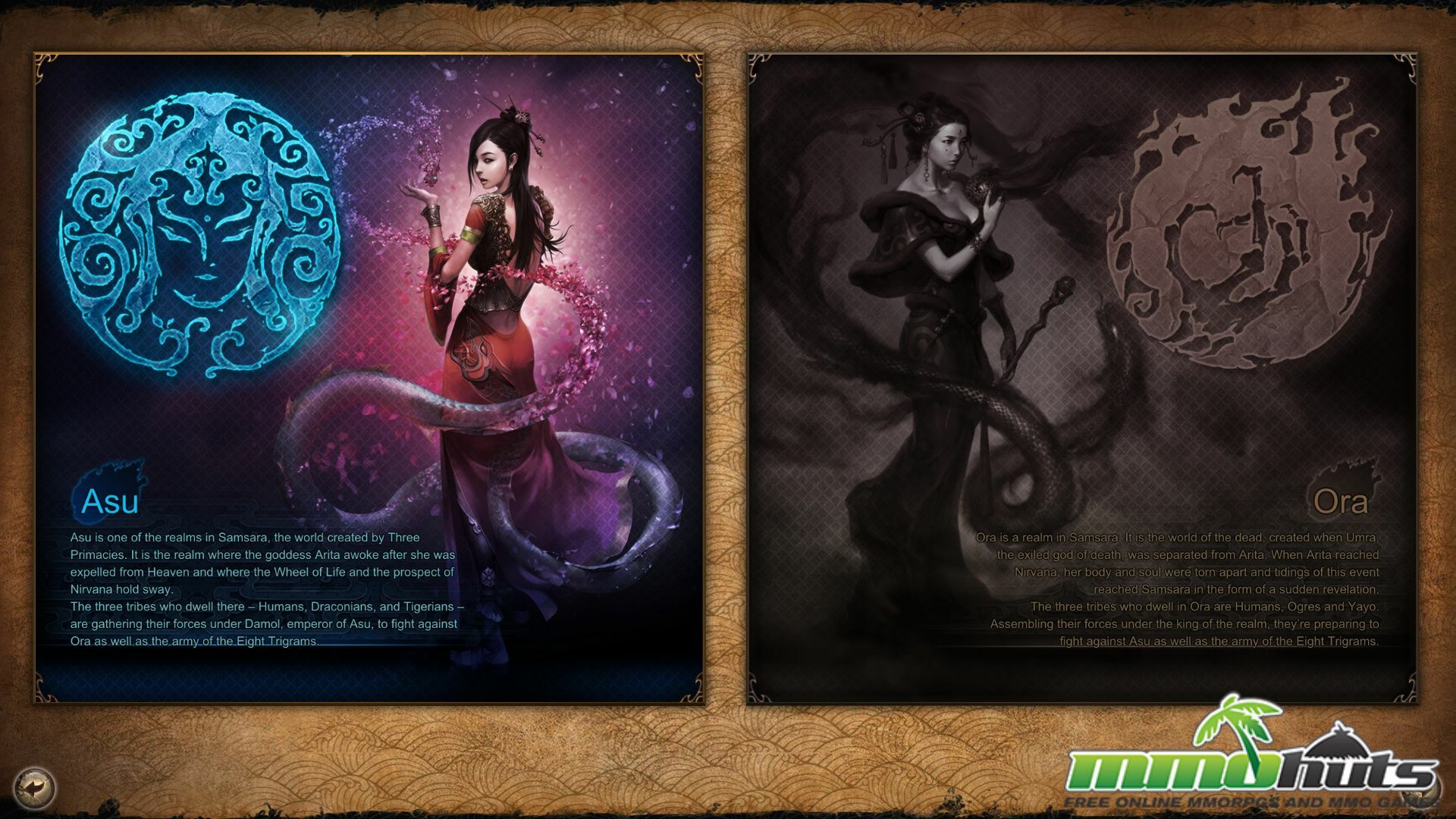 The most obvious form of imitation is the heavy focus on Realm vs. Realm and Guild Battles. They offer two warring factions with decidedly distinct races (both sides have humans, but the humans on each side of the battle are different). The whole conflict is explained through a series of discoveries in the game leading you down the rabbit hole towards ancient mythology, based on actual Asian Mythology at times. Warcraft does this similarly, though with a European flair (minus Pandaria, but let’s just ignore that shall we?). Seeing a similar build-up off Asian Mythology done well was a pleasure.

Each race can only be certain classes and some of them are incredibly restrictive. Draconians can only be Warriors and Rogues, while Humans on both sides can pretty much do it all. I was kind of hoping for a different flavor on the classes, but these are more recognizable to pretty much any audience. 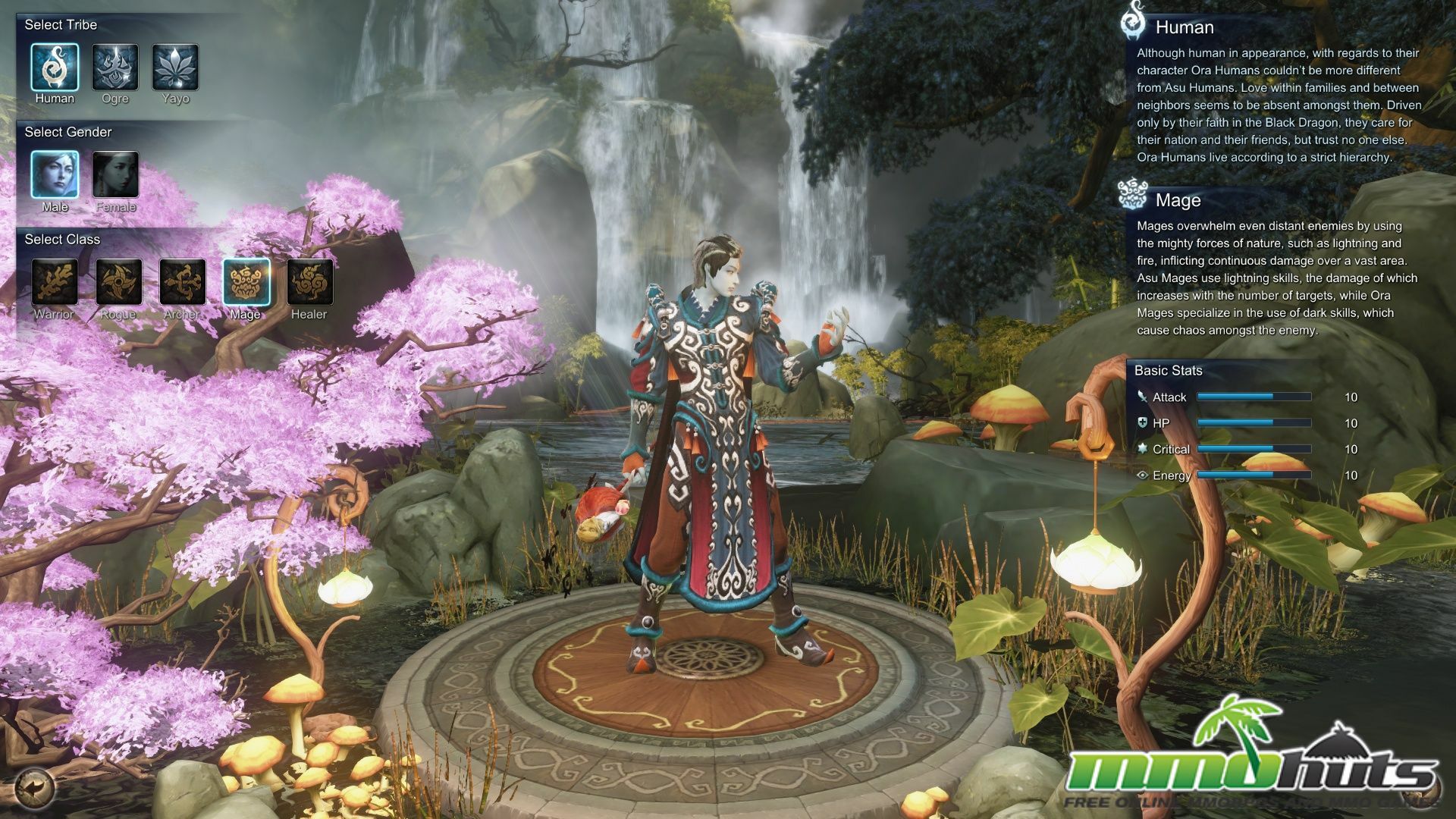 Where this game really shines right out of the gate is character creation; you can change virtually everything about your character, from the style of horns/tail your character has, waist, calf, thigh, foot, breast size. And unlike previous games I have reviewed, though yes you can increase your characters’ cup size, they don’t jiggle like freshly prepared Jell-O. I may or may not have tried everything I could to test that theory. Character customization? Fantastic. It goes along with the fact that this game is so damn vibrant: The pinks, greens, blues – they’re all so bright and vivid so far. The game defaults to Windowed (Full), which forces the game into a rather crappy resolution. So you have to swap to Full Screen, change your resolution, then swap it back to Full (Windowed) if you’d like to see the game’s true beauty. I like it because I alt-tab a lot and there’s less delay that way. 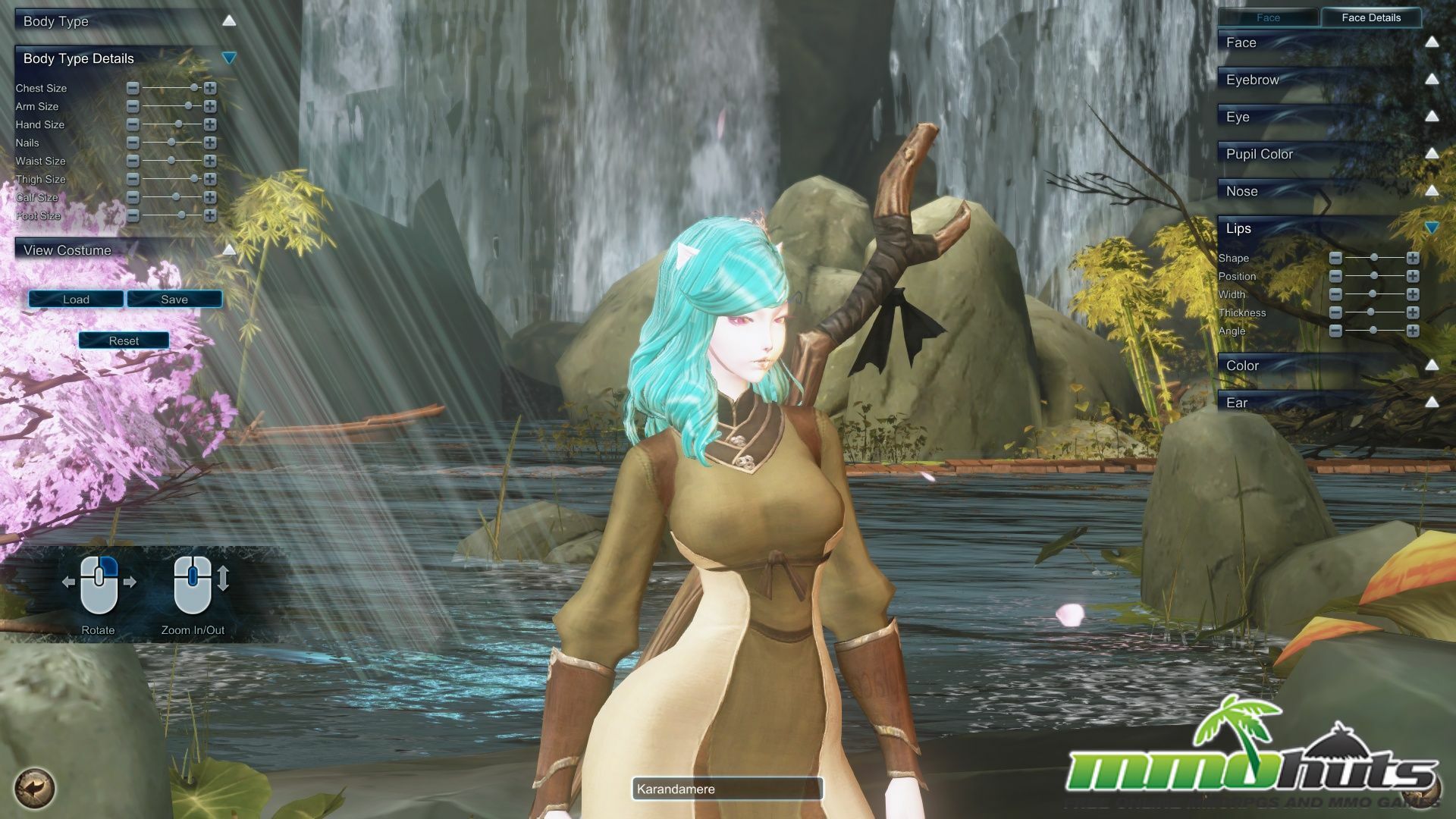 Sliders allow for some fun exaggeration in character creation.

You also have three sub-professions that are different as well: Bounty Hunting, Treasure Hunting, and Fishing (Okay, Fishing’s not that new. . .). Bounty Hunting is a lot of fun, but challenging. Sometimes you have to fight an elite monster while others involve scouring the ground for lost items. When you’ve accepted bounties, you can click the Magnifying Glass icon to show you a rough area where it might be. Treasure Hunting lets you search a zone for items. There’s a map you can get from a variety of sources like mob drops, and it will show you a tiny portion of that map with an “X” where the spot is marked. You dig like in Archaeology (WoW) and when you’re close an aura pops up with a direction. When you get the chest, you’re assaulted by guardians. Defeat them and the booty is yours! Fishing? Well, it’s fishing. I can’t say too much about that. But the first two are a lot of fun, even if they can be ridiculously frustrating. But I like the idea of being a Bounty Hunter more than I like a lot of other games’ sub-professions. There’s also crafting but I haven’t messed with that too much yet.

Items and skills get a major focus in your character’s development in ASTA. Lots and lots of mechanics, equipment slots, talents, and item enhancements going on! There’s a talent system similar to World of Warcraft’s Vanilla talent system, or League of Legends’ Masteries. You can also make macros similar to the FF MMOs, but considerably easier to use. You name it, Select “Target”, “You”, or “Target’s Own Target”. I have a feeling this could be considerably helpful in making healing/burst dps macros. It isn’t automatic, you have to hit the macro button each time to cycle through the abilities you put on it. You have also “Divine Summoning,” where you bind a spirit to your character. The game gives you one a day free and they have rarity and a variety of abilities. Every x levels you can equip another; you also have a choice to merge them for exp to increase their power. They also use another Guild Wars 2 mechanic – the open world quests. When you reach certain spots in areas, you see a series of quests pop up, and everyone contributes on their own. When the quests are completed, if you’re in the zone, you can get a reward for it depending on how much you worked on them. 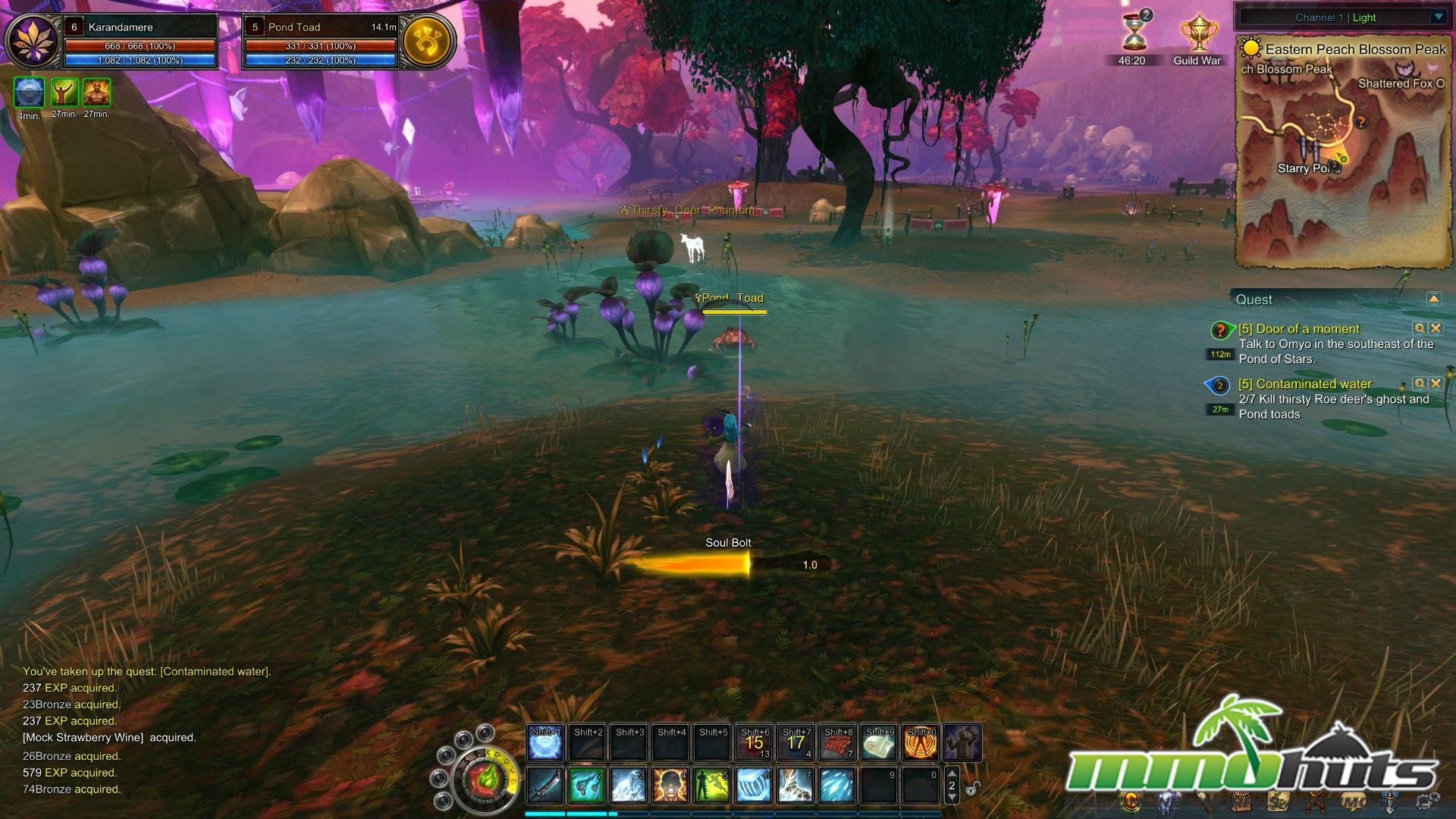 Visually the art style seems to fall somewhere between RIFT and WildStar.

You can also enhance items and more importantly, your character: Once a day for free you can roll new stat points. Normally when you level, you get five points to distribute how you see fit, but you can also use the free daily roll, or “Stone of Strange Fate.” That item lets you have a Normal Enhancement roll for each time you use one. Now, bear in mind: When you make this roll, you do not have to keep it. You can hit cancel, but it still uses your roll. Each stat gets rolled, and it can go from -5 to +5 in each of those stats. YES YOU CAN LOSE STATS. If you’re super greedy and unlucky, you can really take some big hits. Thankfully you aren’t locked into them. Also you can use your currency to do it, called a “Gold Enhancement”, or if you have Soul Stones, you can do “Advanced Enhancement.” It feels like the Gold Enhancements were higher rolls over all, but I can’t prove that. Soul Stones are acquired from Daily Login (which starts at 20 minutes from log in, and increases; the longer you’re in, the more you can get a day). Of note: they are shared across your characters. You can also use them for other things like inventory expansion. 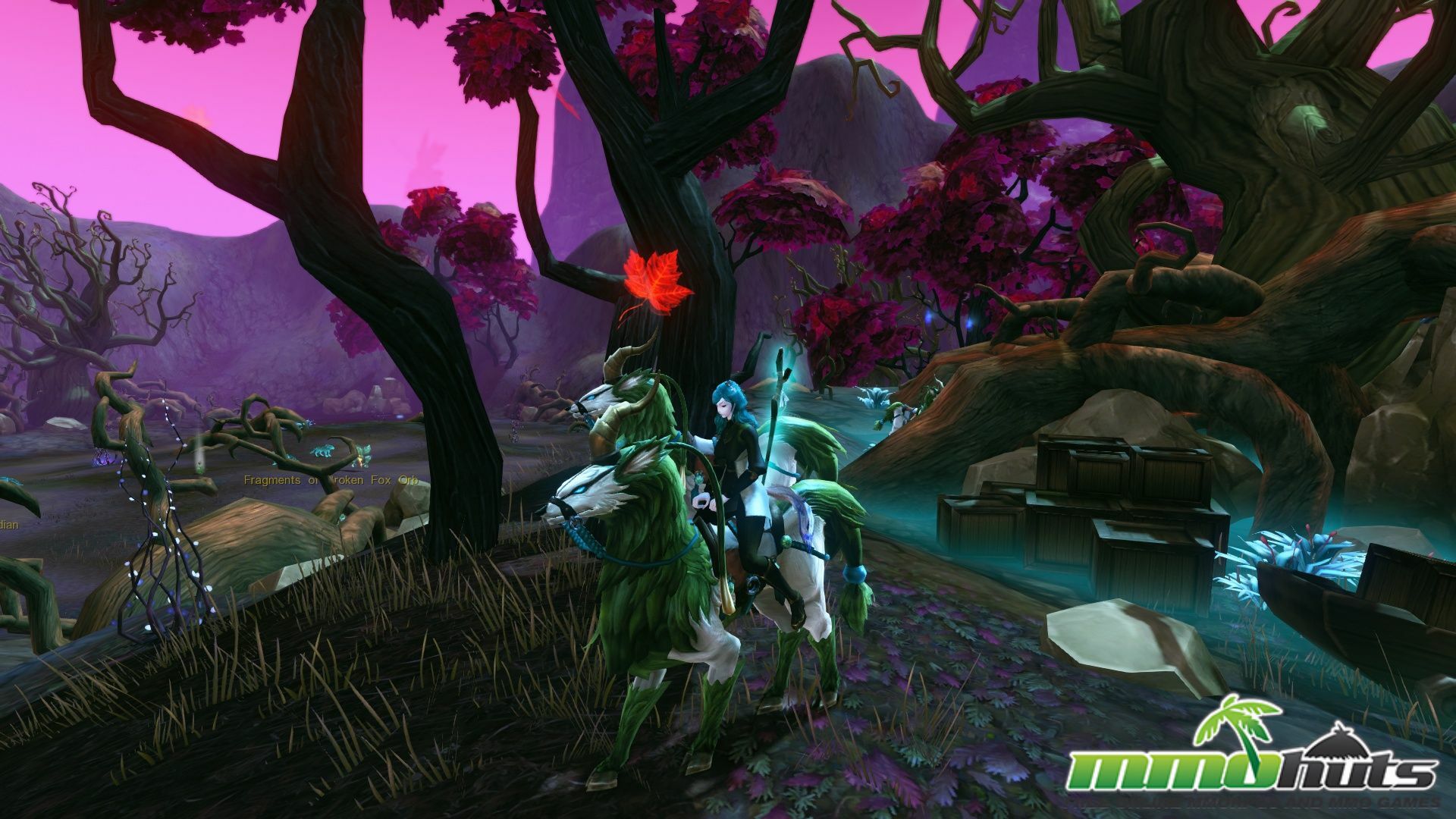 ASTA is certainly feature rich, and I imagine there's quite a few secrets I haven't had time to discover yet.

When it’s all said and done, there’s a ton going on here: an interesting story, dungeons, raids, battlegrounds, class arena, team arena, crafting, world exploring, so much to see and do. It feels pretty linear, but that’s not so bad when you get down to it. I tested the game in its initial beta phase, but it looks like more testing is starting up right now. It’s fun; not too easy, not too challenging. The classes offer a different enough experience to make alting fun. I tried a few and didn’t come across any I disliked. While it may or may not have been a success in the Asian market, I have a feeling it will have a decent reception here. Is it a “WoW Killer”? Anyone who has read my work knows I don’t believe such a thing exists. Not because WoW is the best game on the market, but because any game that seeks out to kill another game invariably fails. I can see the argument for it being the Asian Warcraft though. It won’t turn the world on its head, but it will be fun, vibrant, and entertaining. It does have a “Cash Shop” button, but the only thing that showed up were some Stones of Strange Fate that I didn’t grab earlier. I suppose it will have items to buy with real money later, but I can’t report on that until it happens. Until then, look forward to the Open Beta!