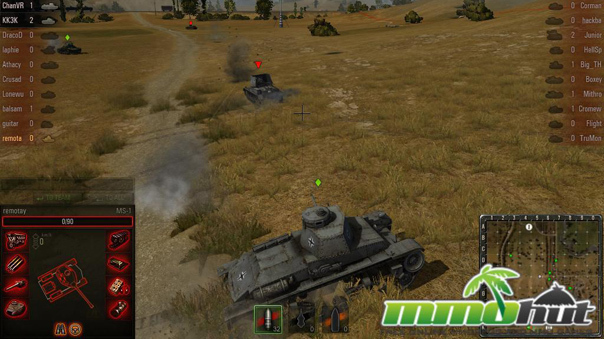 World of Tanks was first commissioned in 2009 and put into service in the second half of 2010. The tank-based shooter is developed by Wargaming.net, a Russian studio behind several other historically themed video games. World of Tanks is their first free-to-play title, and they’ve come in swinging strong. World of Tanks boasts great graphics, ease of play, and plenty of customization features.

World of Tanks is set during the World War 2 era but also encompasses the years preceding and following that infamous conflict. All of the vehicles, equipment, and environments are historically accurate and are drawn from the 1930s-1950s period. The client size comes in at a bit over 1 GB, but won’t take long to download since multiple direct download links are provided. Players sign in using their email address and don’t have to worry about character creation. All new players start with a Soviet MS-1 and a German Leichttraktor. These are light tanks and won’t put up much of a fight, but they are versatile and enough to learn the ropes. There’s no tutorial or trial round to worry about, either. Players can simply click the large red ‘Battle!’ button towards the top of the screen and get started. 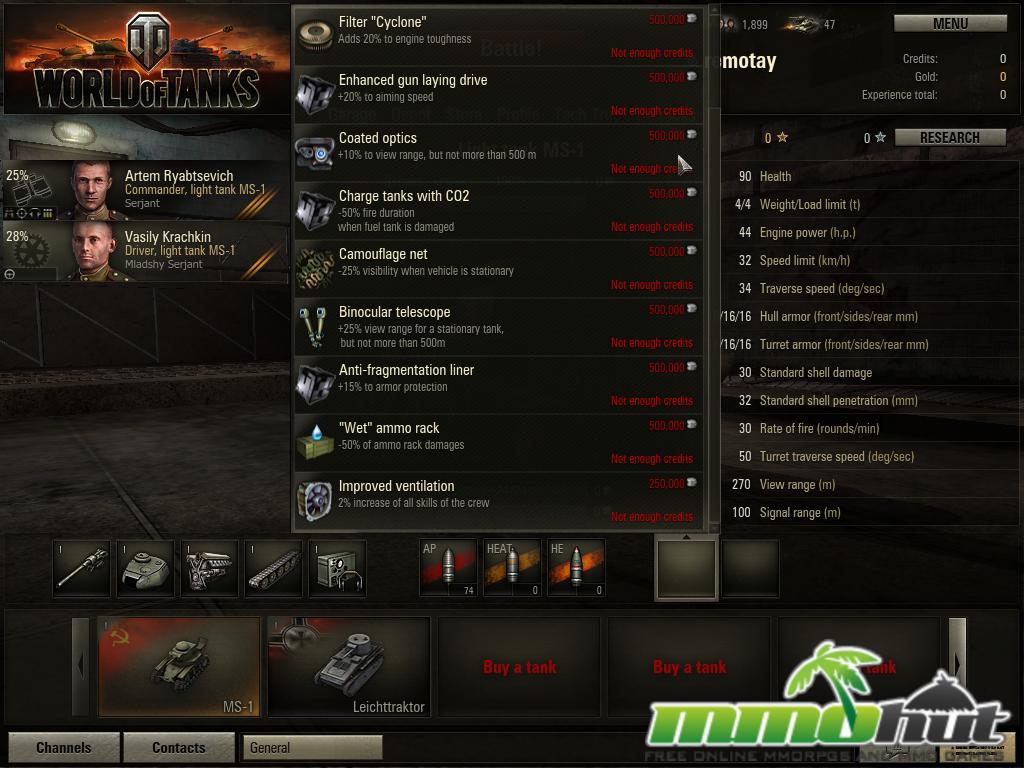 While World of Tanks is proud of its historic accuracy, it doesn’t let history get in the way of gameplay. The game is easy to pick up and play, but difficulty to master. All matches involve two opposing teams of up to 30 players, for a total of 60 players per round. The most common game mode is team deathmatch, where players are randomly assigned to a team before the round begins. Other modes include capture the flag and clan deathmatch, but new players will generally find themselves in the standard random team deathmatch mode. World of Tanks supports a range of resolutions and gives players four graphic settings. There’s also an option to play in either full screen or windowed mode. This is very helpful, since new players will spend a lot of their time dead, waiting for the round to end. Having World of Tanks open in a window will allow players to cruise the web during down time. Like NavyField, another war-themed MMO, newbies will find themselves dying in one hit, often unexpectedly. This can be frustrating, but remember that World of Tanks is striving for realism. This means driving full speed ahead at the enemy base by yourself is not a viable strategy. Instead, the game requires teamwork, making use of terrain, and ambushing opponents. 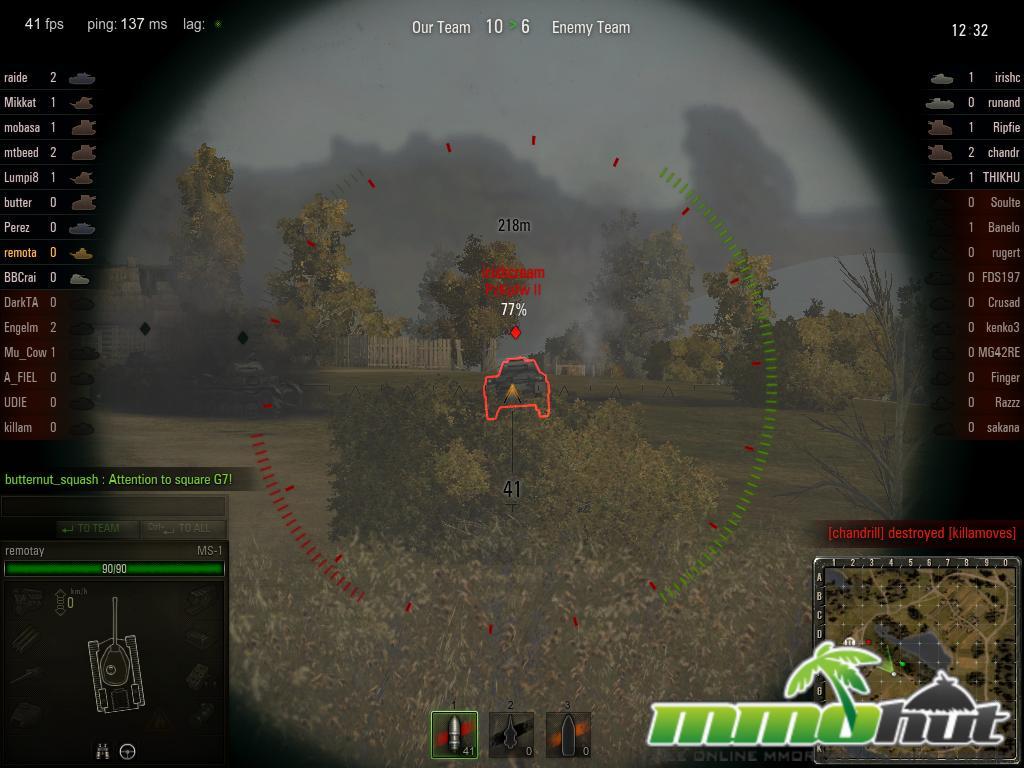 The gameplay in World of Tanks was inspired by the tank-based combat in World War 2 Online, a subscription-based MMORPG several years old. Fans of the Battlefield series will see similarities. Tanks played a large role in Battlefield 1942, and are present in the more recent Battlefield Heroes. In the Battlefield games, tank mechanics were almost arcade-like, and WW2 Online was a bit too complicated. World of Tanks strikes the middle ground between those extremes. Tanks are easy to control, but there’s a lot of depth to their customization and stats. Players move their tanks with WASD and control the camera and their turret with the mouse. The default view is third-person, but can easily be changed by using the mouse wheel. The game utilizes an interesting aiming system where the crosshairs shrink or expand depending on the action of the player. While moving, the crosshairs expand making it difficult to hit a target. After entering a stationary positions, the crosshairs start to shrink making it much more practical to fire. The beginner tanks tend to move slowly, so it may take a while to make your way around the map. Maps themselves are large enough to allow depth of movement and ambush, but not so large that it becomes impractical to get from one end to another. A match ends either when one side is wiped out or if one team manages to capture the other side’s base. There are no respawns in World of Tanks. If a player’s tank is destroyed, they must spectate until the round ends. 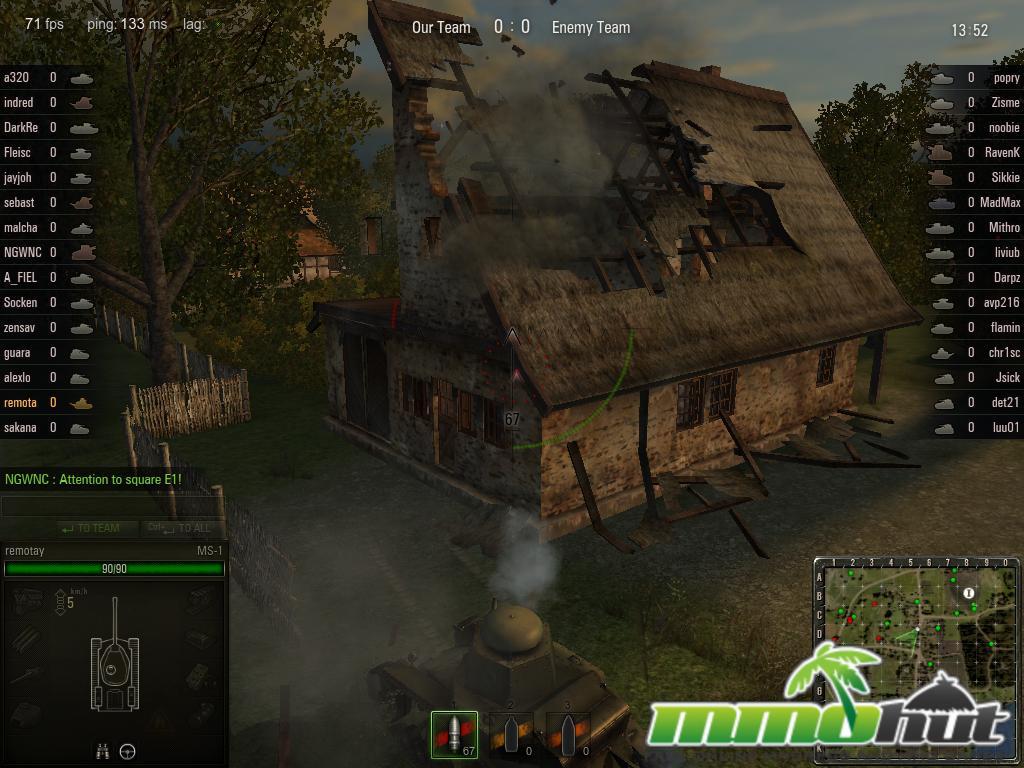 At the end of each round players are rewarded with experience and credits whether they win or lose. Credits are the main in-game currency and can be used to purchase new tanks, NPC crew members, or new parts for your current tanks. There are five types of vehicles including light, medium, heavy, tank destroyers, and SPGs (artillery). Additionally, each individual vehicle has multiple slots including turret, chassis, engine, and gun ports. There are 2-6 versions of each part for each vehicle. Just purchasing these parts or vehicles isn’t enough, as players must first use their accumulated experience points to research the appropriate technology. Each faction has its own tech tree. This means its best to focus on either the American, German, or Soviet tank lines. Distributing points across the three trees will just make it take longer to access powerful tanks and parts. Even after their first round, players will have enough to start upgrading their starter tank. The best place to start is probably with engine and track upgrades since these effect movement speed. 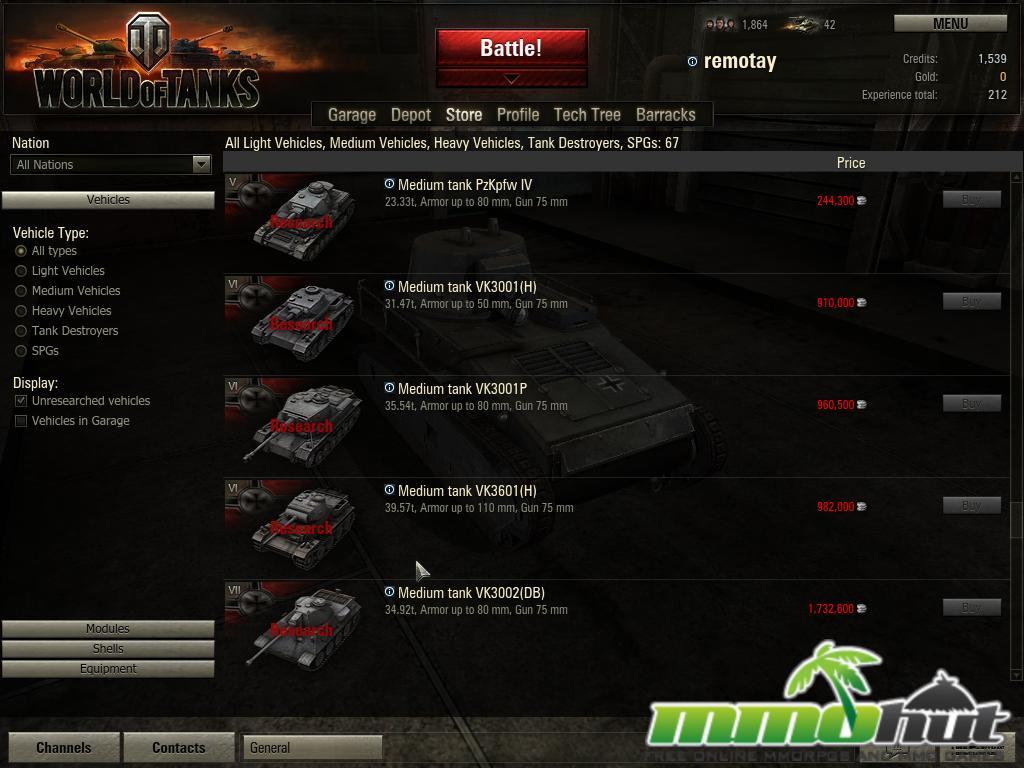 Besides purchasing tanks and parts, players must recruit crew members to populate their vehicles. Crew members come in four types, Commander, Loader, Radio Operator and Driver. They gain experience with use and become more effective at their roles. The loader helps lower the cool down time between shots, the driver speeds up movement, radio operators increase the range at which the minimap displays enemy units, and the commander improves aiming. Players start with a full crew for their starter tanks, but must hire new recruits to populate additional tanks. Crew members are free to recruit at the lower tier, but premium ones cost either credits or gold, the game’s premium currency. There are also multiple types of ammunition such as armor piercing and high explosive. Each type of ammo has multiple variants, some of which cost gold. Ammo is not infinite in World of Tanks! Players will have to replenish their stock after each round or risk running low during combat. 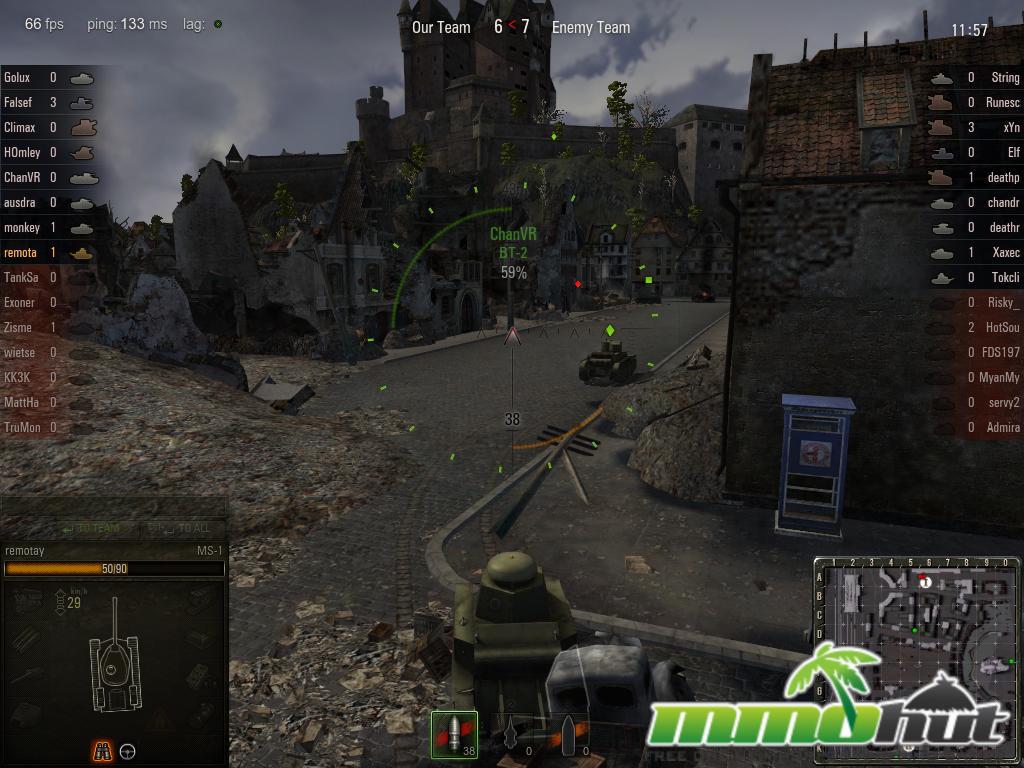 Like in Battlefield Heroes, it can be difficult for friends to jump into the same game in World of Tanks. Sure, players can add each other as friends and try to join the same game, but the trouble with this is how fast matches fill up in World of Tanks. That’s a testament to the game’s popularity, but it can prove frustrating. The lack of a traditional lobby system definitely streamlines the process of finding a game, but comes at its own cost. Another small complaint concerns shooting. It’s difficult to tell where a shot lands, and this may be realistic, but it makes aiming that much more difficult. If I knew where my last hit landed, I could better calibrate for my next shot. New players should expect to die a lot, and to die a lot without scoring very many kills. Enemy artillery can prove especially frustrating since their range allows them to kill while remaining unseen by most other tanks. It’s great to see the three major nations represented in WoT, but it would have been nice to see some tanks from the side of the British, Italians, or others. It remains to be seen how the Russian World of Tanks does against the similarly themed Korean Tank Ace. The two games will see final release at around the same time. What ever the outcome, 2010 will be a great year for free-to-play gamers who also happen to be WW2 buffs.

World of Tanks is an easy to approach, tank-based shooter that has layers of depth to unravel. Quickly jump into massive 30v30 battles, or take the time to customize one of the hundreds of tanks available in World of Tanks. The game can be enjoyed in short bursts, or more competitively as part of a clan.