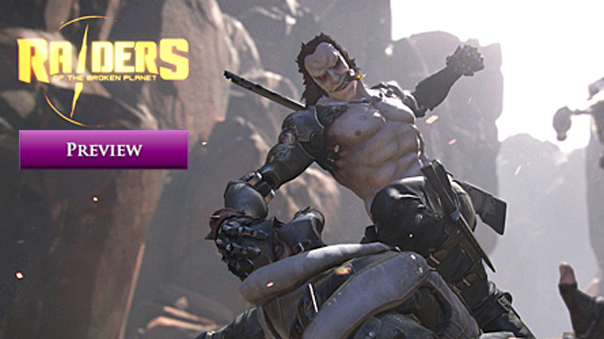 There have been a whole host of action RPGs that “could have been.” Games that were remarkable on paper and even inception, but somehow, for some reason or another, fell short of the mark. The one that Raiders of the Broken Planet reminds me most of, is a more serious Battleborn. Battleborn fell into obscurity for a variety of reasons, but one of the major ones in my opinion is that they dropped it with Overwatch, and Blizzard crushed it with its mighty boot. It lacks the comical, bright colors of Battleborn, and instead feels very much like a grindhouse film. But there’s something that makes Raiders particularly special. You have two sides, because of course, but if you get tired of playing as the titular Raiders, you can pick “Antagonist” mode. That was probably the most fun I had in the game, which I’ll cover shortly. Raiders of the Broken Planet is an asymmetric online ARPG, but it’s not just a run-and-gun fest like you’d get in games like Borderlands. Instead, it’s a more tactical, strategy-oriented game which you will discover in the tutorial. You play as Harec, a man in a skintight black suit, a’la Batman, though one of his eyes looks corrupted by some sort of virus. He’s a sniper and you’ll sneak around, using cool QCC combos, and sniping people as you go. 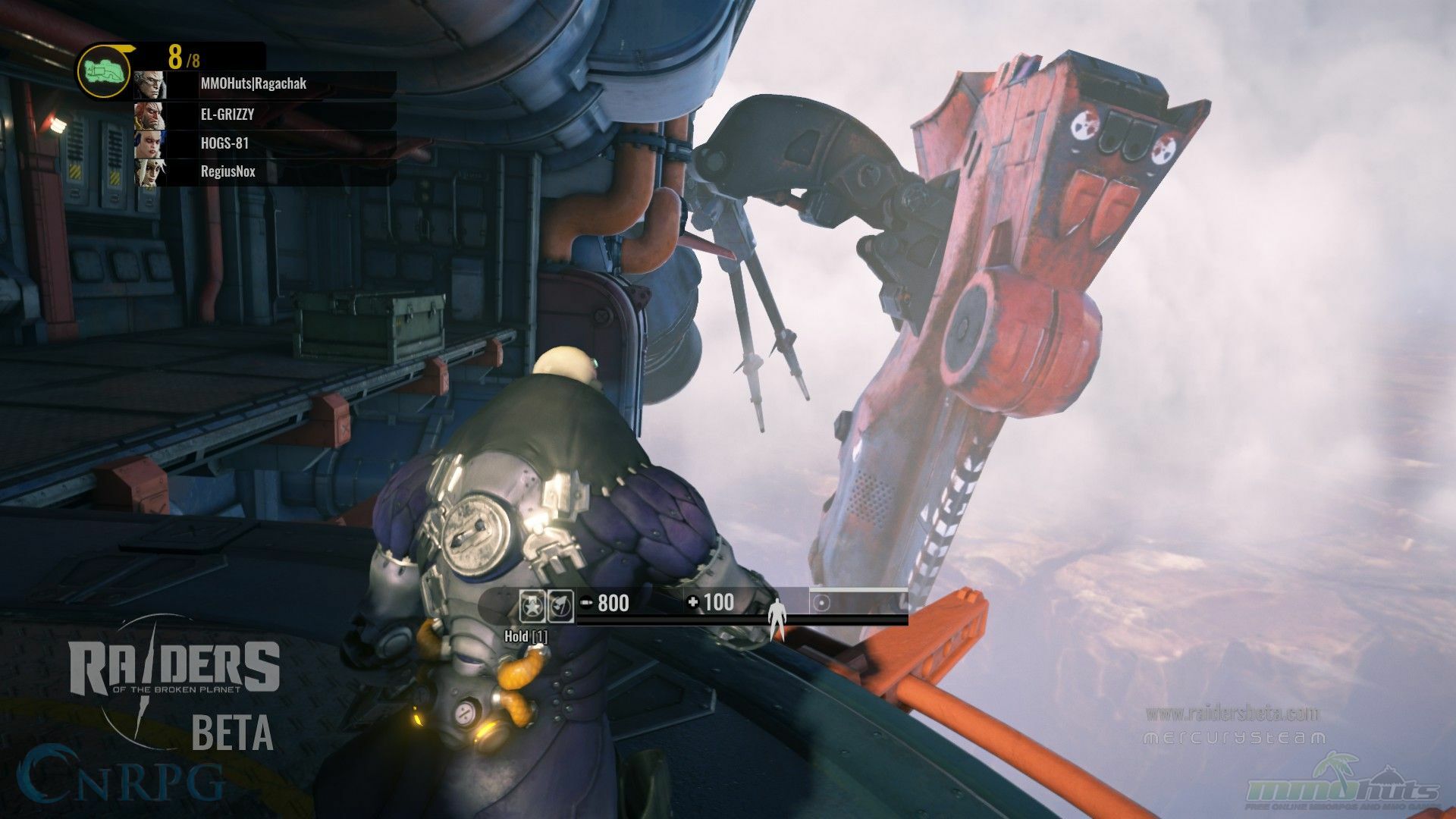 So when you join an adventure with other players, you have a limited number of “lives.” The main resource that we’re all fighting for, Aleph, is what brings us back to life over and over. It’s a ridiculously powerful source that was found on one of Saturn’s moons. Your operator, the guy who sets up the missions, will occasionally tell you in a stage/level, that he can’t get the Aleph to you, so don’t die. If your whole team dies in one of these spots, it’s game over. I only got to play one stage, really, but I played it a lot. I couldn’t seem to get a queue for “Alien Myths,” the next part of the story. I can’t tell if that’s because nobody was queueing for it, or it simply isn’t in yet. The story is set in Seasons, and the 2017 Season has four stories, which are the stages. “Alien Myths,” “Wardog Fury,” “Hades Betrayal,” and “Council Apocalypse.” Now, if these are the only stages on offer for the 2017 season, I’m going to be admittedly a bit worried. I suppose it also depends on when this year it comes out, and how early in 2018 the next season will begin. But what I will say is that these stages are long. Good lord. This is both fantastic, and kind of tiresome, because after three or four shots, I got really tired of doing the same level over and over again. But you know what broke it up for me? 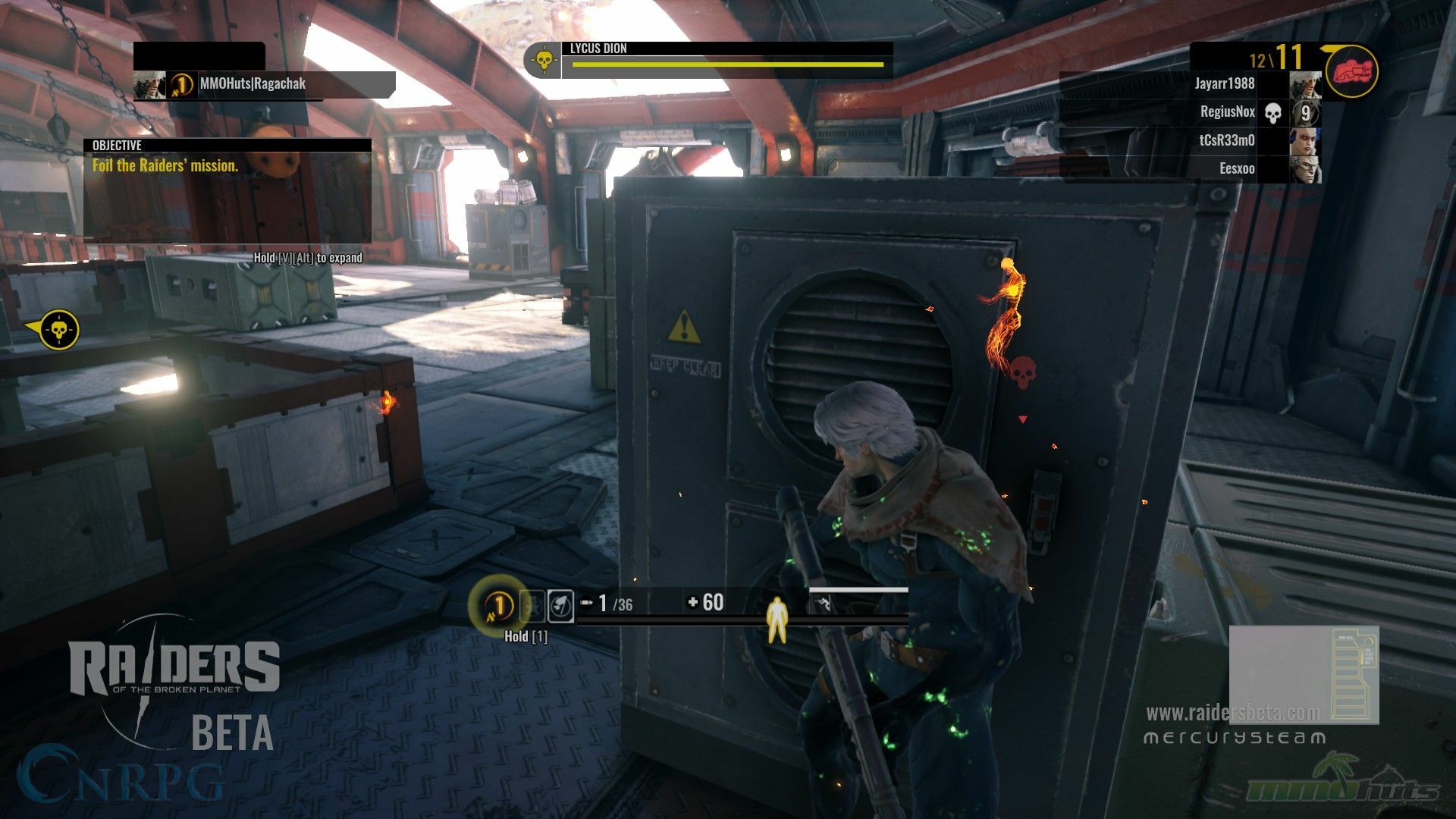 Antagonist Mode. You play in a one-on-four situation, where you pick one of the Raiders who has been lured to the dark side by the villainous force who also craves Aleph. You’ll revive faster than normal players and with unlimited lives. You also have the enemy soldiers fighting by your side, but you have no control over them. You’ll be doing battle with actual players trying to complete the mission, and your goal is to make sure they don’t. My favorite character to do this with was Harec, thanks to his sneakiness and ridiculous snipe damage, and coming out of nowhere with his combo was very satisfying. I never succeeded, making for a combo that enemy players often didn’t live long enough to counter. One time I managed to kill off an entire enemy team save one survivor who broke line of sight before I could finish him off. People who are better snipers than me [and that isn’t hard] will have much more luck than I did though. 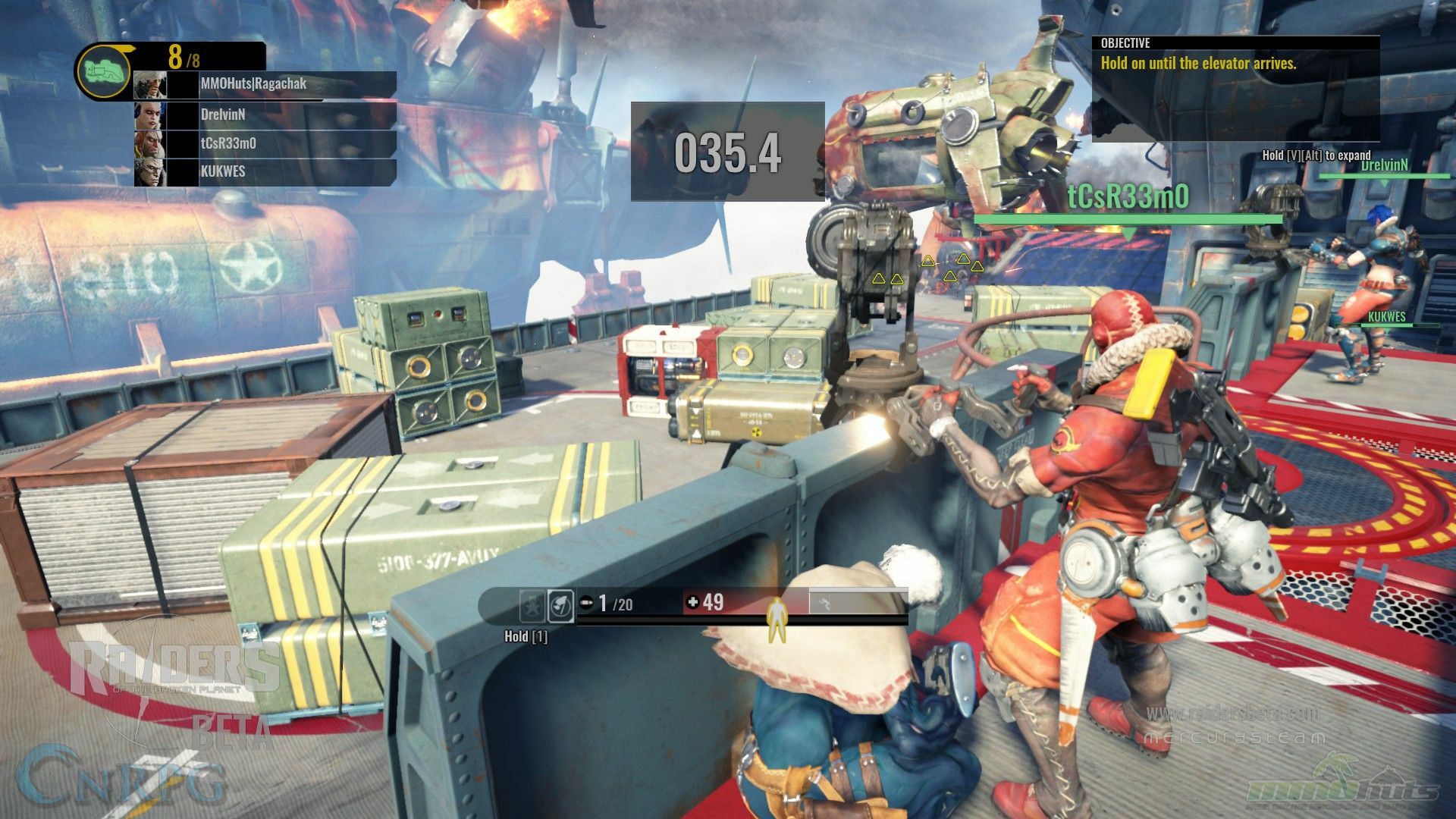 The marriage of PvP and narrated missions is a pleasing presentation.

This is one of the coolest modes I’ve had the pleasure of playing, and it’s apparently becoming popular. Friday the 13th will feature it heavily [because it kind of has to, yeah?] As you do well, the mysterious voice will laud your efforts, and failure will cause him to mock you. No matter which side you play on, you will be ranked from 1-10 on the difficulty of the stage, how much you died, how many people you killed [Soldiers or Raiders], and a few other things. I think my highest was… 6.6 or something like that. It wasn’t high. But I still had a lot of fun doing it. I’d have had more fun with a few friends working together though. What I think is great, is that it seems like every mode will feature this four-on-one mentality and each map will change according to what Raider the Antagonist fields. There are definitely different choices, and I doubt everyone will pick the same person for each map. That’s what will give the game replayability. However this is not a Monty-Hall Loot Run. You won’t accrue thousands of guns in various colors for rarity. When you win a stage, you have a chance to grab a new gun for certain characters, or blueprints for weapons. From what I saw, they don’t add stats, just a new cosmetic look. But that might not be in the game yet, or they might avoid highlighting stats. 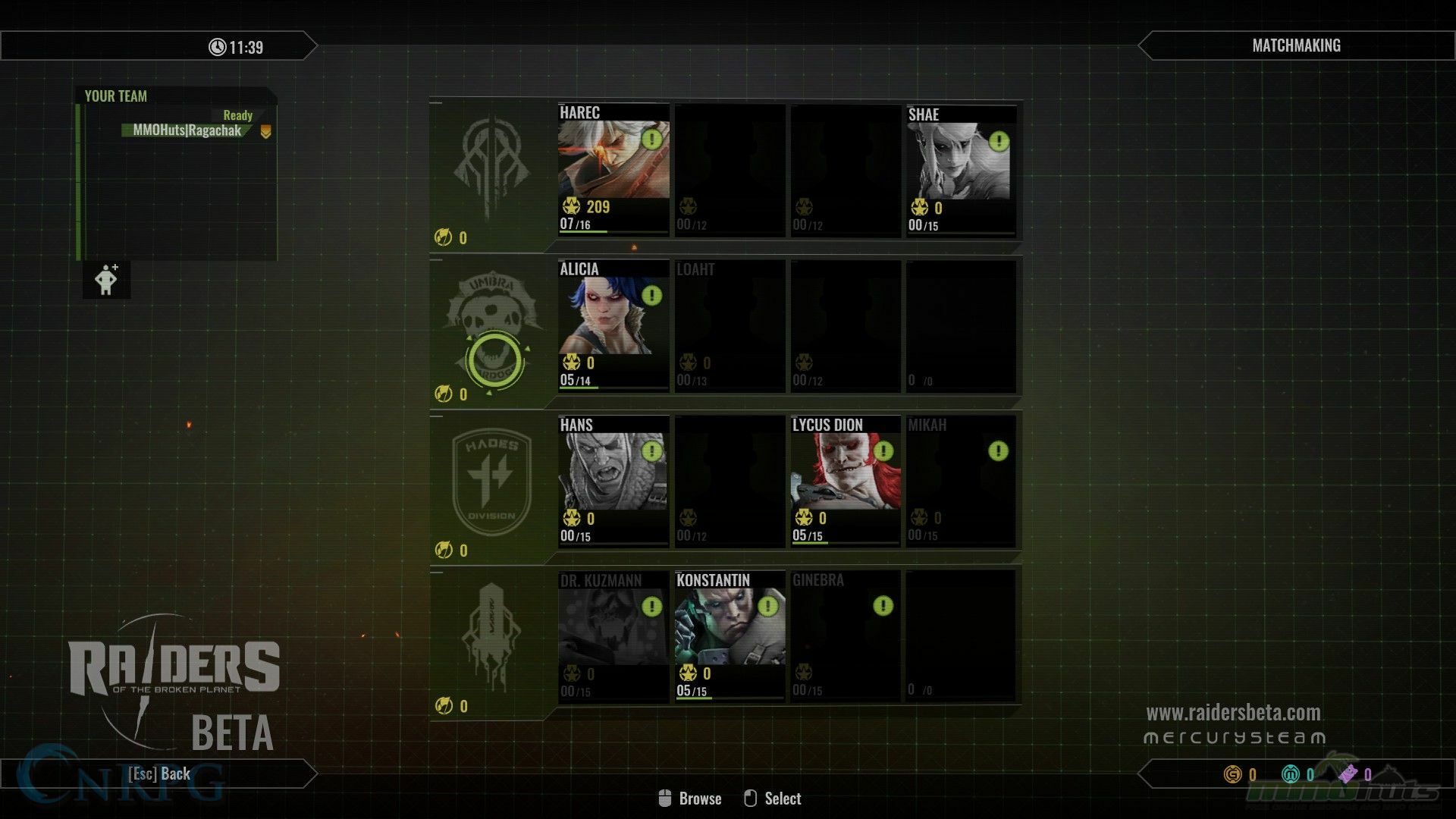 You start with a few characters, but as you complete stages you’ll acquire Gold, which you can use to recruit new Raiders to play as. There are three factions of characters, working with and against each other for domination of this Aleph force. You certainly don’t have to play as other people if you find characters you like playing as, but you might not always get to play them. Though each character is special in their own way. For example, Harec is a cool, edgy sniper, and Konstantin is a super-slow, super big man with a gigantic chain gun he can spin up to do lots of damage. Though he’s a liability when trying to run to an elevator or platform before a timer runs out. Playstyle is up to you, and each character has their own goals and desires, and they are all incredibly well written. The stages themselves are incredibly well designed, and require thought and tactical planning. If you don’t act smart, you’ll get blasted, respawn, and run out of lives. That can, and probably will happen. You have melee moves and also your gun, but when you attack and kill someone with a melee move, you’ll get their ammo. You do not have unlimited bullets friends. You have to go in occasionally and punch a fool into custard. Fortunately, this is very easy to do. You have an attack and a dodge button too. 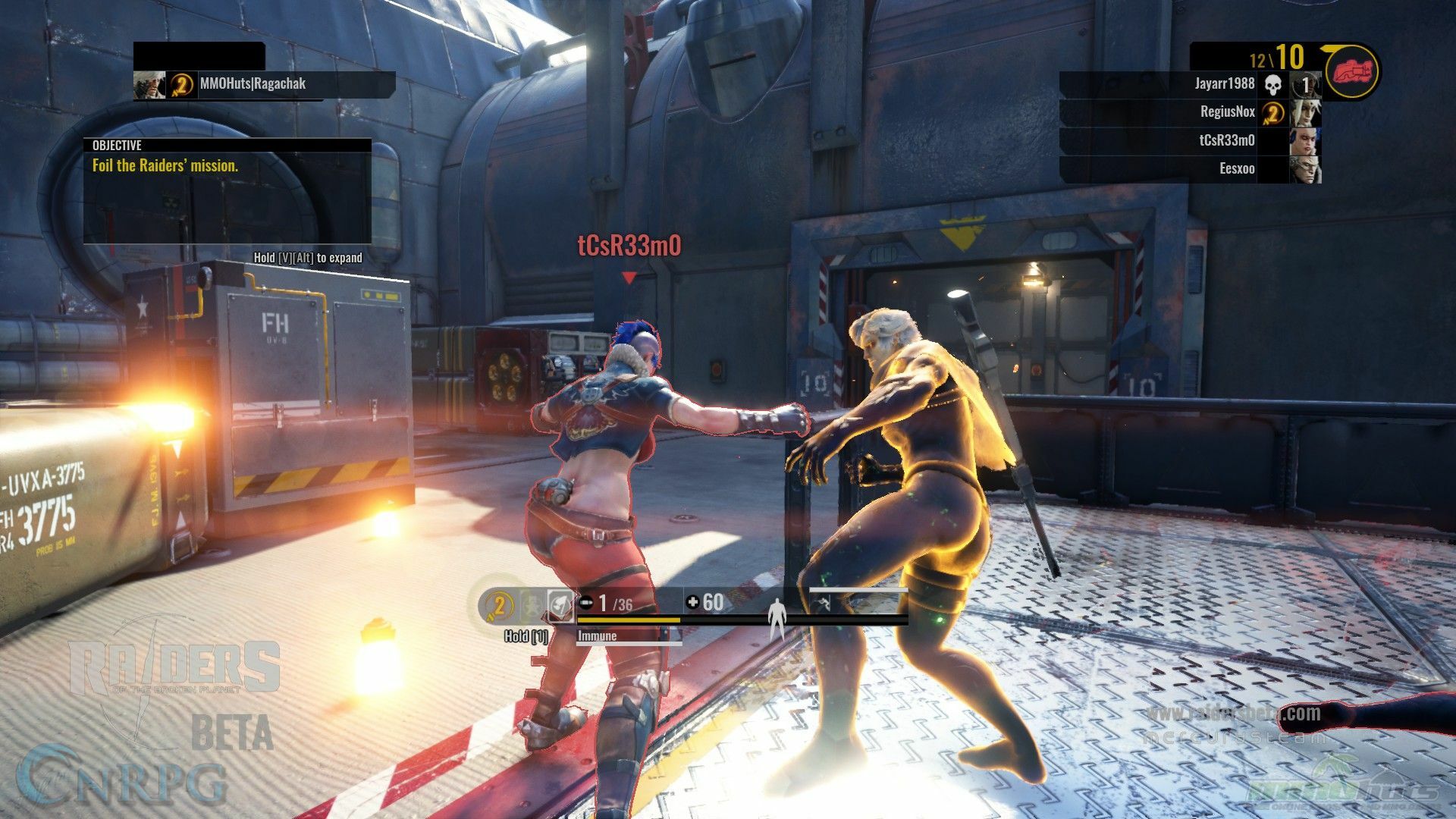 Then there’s also the matter of your deck of cards. Instead of a talent tree, you have a deck of cards, and the cards drawn from it can be put in a loadout for you to enhance your abilities. You have to use your Gold to do this though, so you’ll probably have to succeed a few times to get new cards for your loadout and for new characters. So I feel like it’ll probably have a bit of a grind to it, unless there will be other modes to play other than Adventure and Antagonist. Challenges to complete, et cetera.

Okay, so I love playing this game. It’s fun, it requires me to think, and the characters are all interesting with genuinely different playstyles. But from what they have on offer from the story, I’m a little worried people will burn out early, completing all the content in the first few weeks and then wind up bored. I don’t know what their tentative schedule is, so I can’t comment on that. If they have a way to keep this lively, it will surely succeed wildly. And you do have the Antagonist mode, but I don’t think everyone’s going to love it. Not everyone wants to be that asshole that prevents the hero from succeeding. I sure do though! I wonder if people queueing up for that mode [or not] will affect stage wait times, also. Does each Raiding party have to have an Antagonist? I think at first more people will flock to the regular stages, but then people will find the joy of Antagonist Mode. It’s a really unique way to play an action RPG like this. I worry about the story only offering those missions for the time being, and while they are long, it might get tedious after a while. 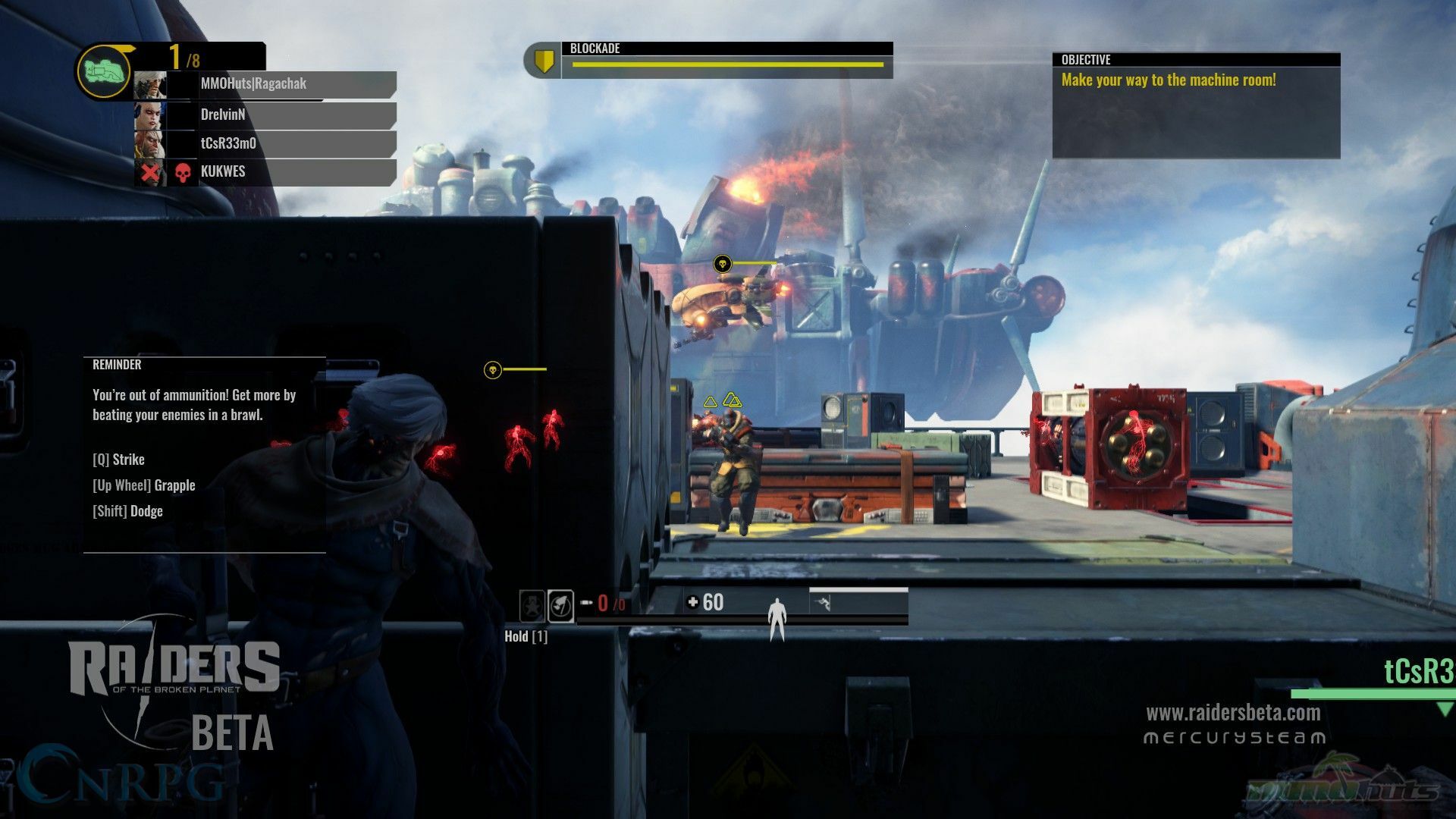 Planning an assault in a 1v4 situation really gets your adrenaline going!

However, with those minor offenses aside, this is a fantastic, well put-together game. Visually and musically it’s quite appealing, the designs of the characters are reasonable. They all look like they belong in this setting, that they’re all there to try and strike it rich in such a dangerous environment. It all makes sense, and that’s important for the sake of immersion. I do hope that they give losers currency also, to make it not feel so crippling to fail. I don’t recall winning much if anything on a failed stage, but I only failed once. This is an intense game, and definitely a fresh way to look at the Action RPG shoot ‘em up. I have very high hopes for Raiders of the Broken Planet, and I’m looking forward to more Beta Weekends to see how it develops and grows.