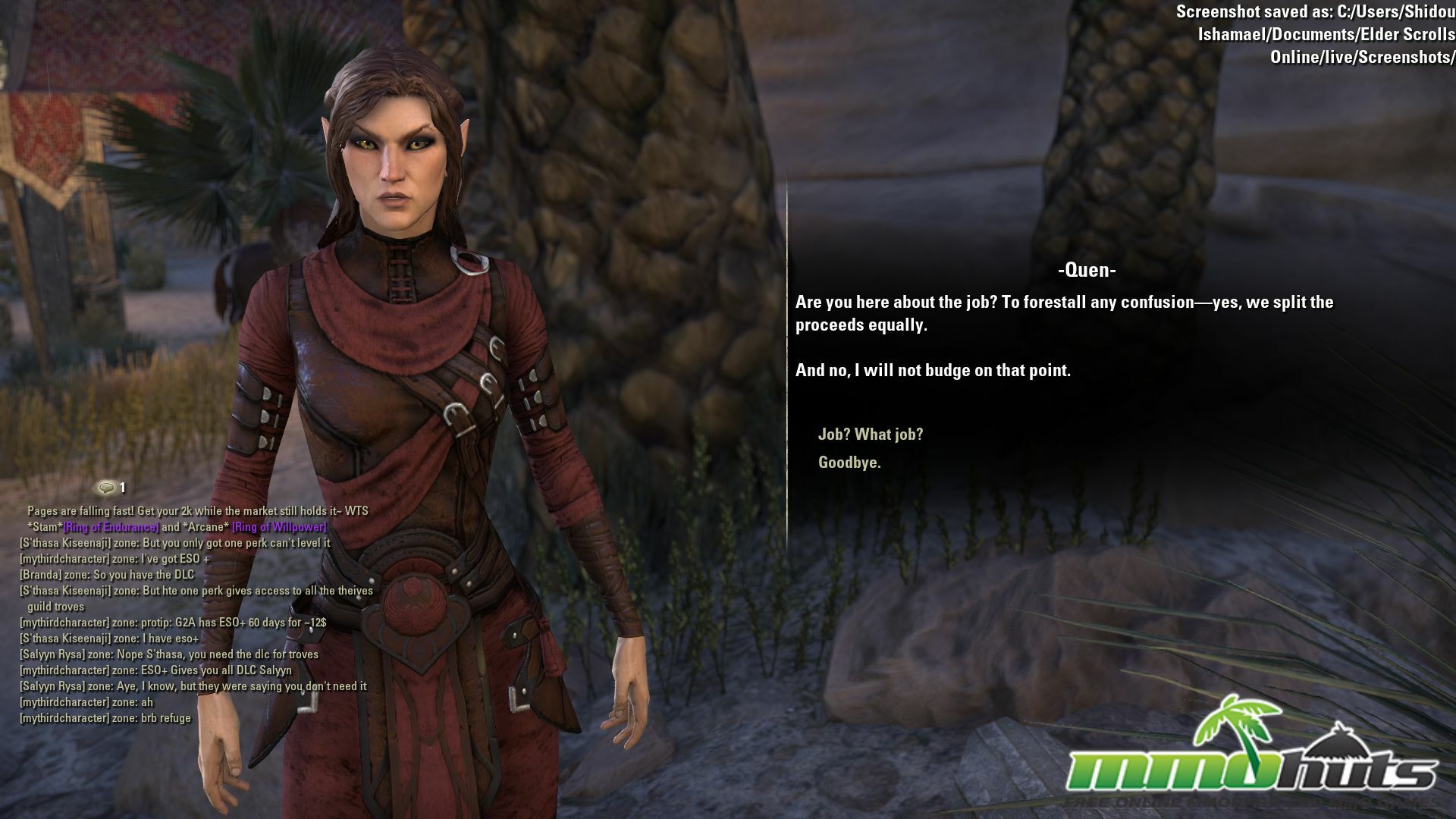 Elder Scrolls Online saw fit to give some love to those paying the optional subscription this month with the release of a new and long anticipated DLC – The Thieves Guild. Otherwise this must have update will cost you 2000 Crowns. But as far as the actual gameplay, I was pleasantly surprised. I know I have lampooned the game kind of hard in the past, and admittedly, some of that might have been unfair Skyrim biased rage in action. The Thieves Guild DLC is proof that Zenimax is working hard to fix the problems of old in ESO and create a better product for the Elder Scrolls fanbase. This DLC might not be for everyone though; it requires espionage, stealth, timing, and sneakiness. You really get into the Thieves Guild style of gameplay. Sneaking into areas you don’t belong, fencing items, creeping around and diving into hiding spots to avoid patrols! It’s pretty intense. It reminds me of Thief, or Metal Gear Solid in a bunch of little, but good ways. You don’t have to be a particular level to get into this DLC either, which is good for me; I was. . . very low level coming back to the game. 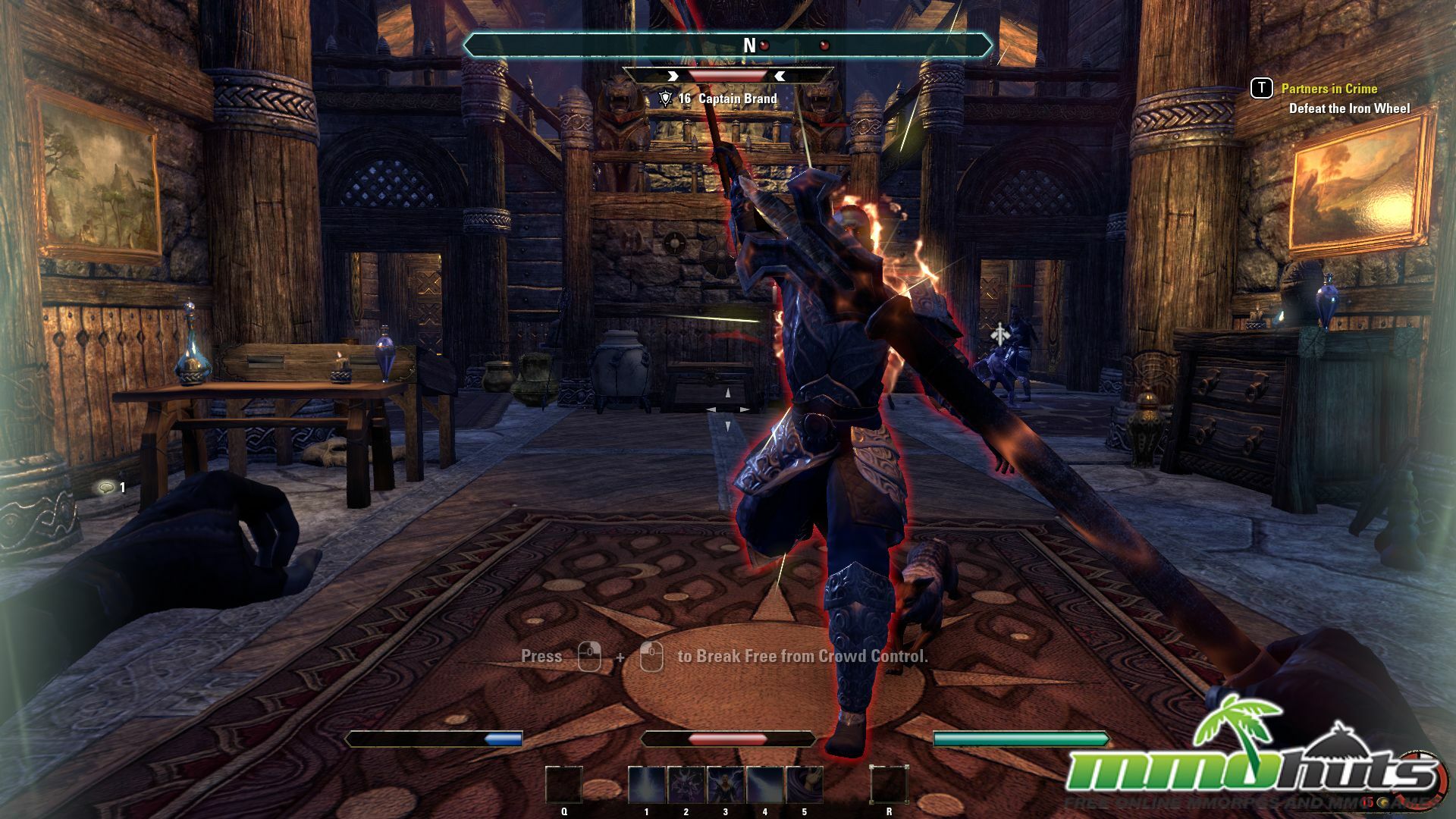 Just because the emphasis is on sneaking doesn't mean epic battles aren't in store should you mess up.

This DLC is a huge departure of what I’ve seen in ESO, and I honestly love it. One of the features that I found that I enjoyed was you can “fence” items you steal while on a mission. While you’re out performing a job, there are always other items in peoples’ homes, warehouses, etc, that you can also pilfer. There’s a fencer in the guild that will sell these stolen items for you, which you can do X amount of times a day. This can lower your bounty, but it is not the only way to get away with not paying what you owe the government. One of the new features are the Guild Traits, perks/passive abilities you can pick up using Skill Points. One of my favorites is “Swiftly Forgotten” and it is pretty powerful in that it increases the speed at which your bounty/heat fall off. I love that, because I’m not always so stealthy and being spotted in a place you shouldn’t be compiles your total bounty quickly. Eventually you can get “Clemency” which lets you basically tell the guard “I know powerful people, this was taken care of” and you walk away like a big shot. I don’t know how far this goes though. Can I get away with murder using that? That’d be pretty awesome. 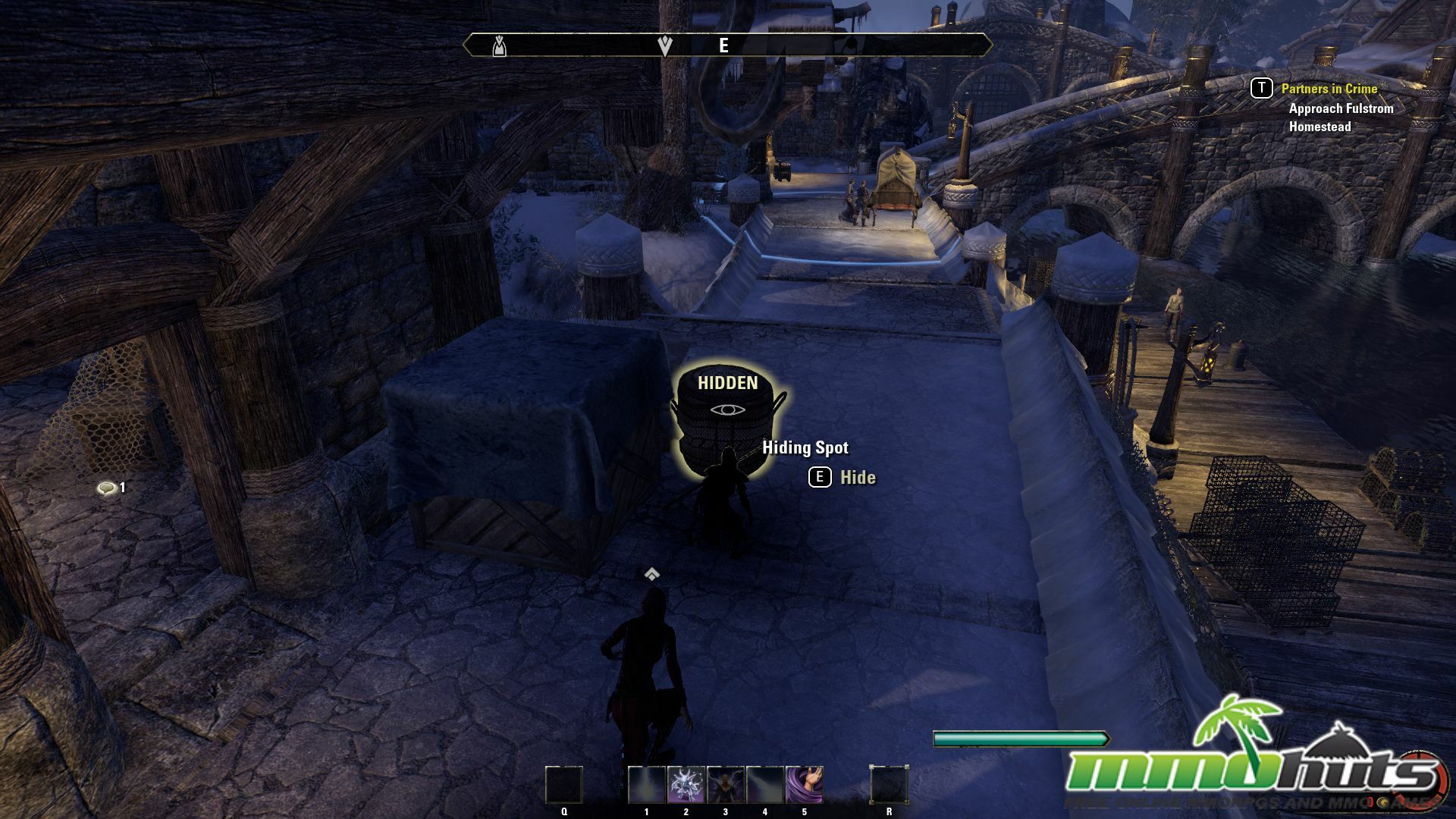 The Thieves Guild offerings are rather sparse at first, especially for a low level novice like myself, but the more missions you do, the greater the infamy of the Guild and the more NPCs that begin to populate it. With more members comes better activities to keep you interested in the DLC longer. You get a cool costume to boot to show your dedication to the cause. I’m very grateful again, that it scales your level up so I could really enjoy being a bandit in the desert. It comes with two delves, two bosses, and three crafting locations, but that I haven’t fully explored yet. I’m not that wild about crafting in general. I just wanted to get my sneak on! I love the blue set pieces I got from doing missions, and there is even better gear in the Trial, “Maw of Lorkhaj.” There’s seven different sets of gear in total, between normal/veteran, and there are even BOE sets for those of you who farm to sell these to others. This new locale also features Tip Boards for tons of little missions to do.

There’s also Heists! You get to go breaking-and-entering, performing timed Heists. The more optional stuff you do during these, the greater your reward. I loved doing all the stealth stuff, even if I’m not really good at it. It’s a break from the normal grind, and I appreciate that. The final really fun thing included are assistants: Smuggler [fence on the spot but he takes a cut], Banker, and Vendor. The Smuggler can’t be seen (besides by you), but the others can. 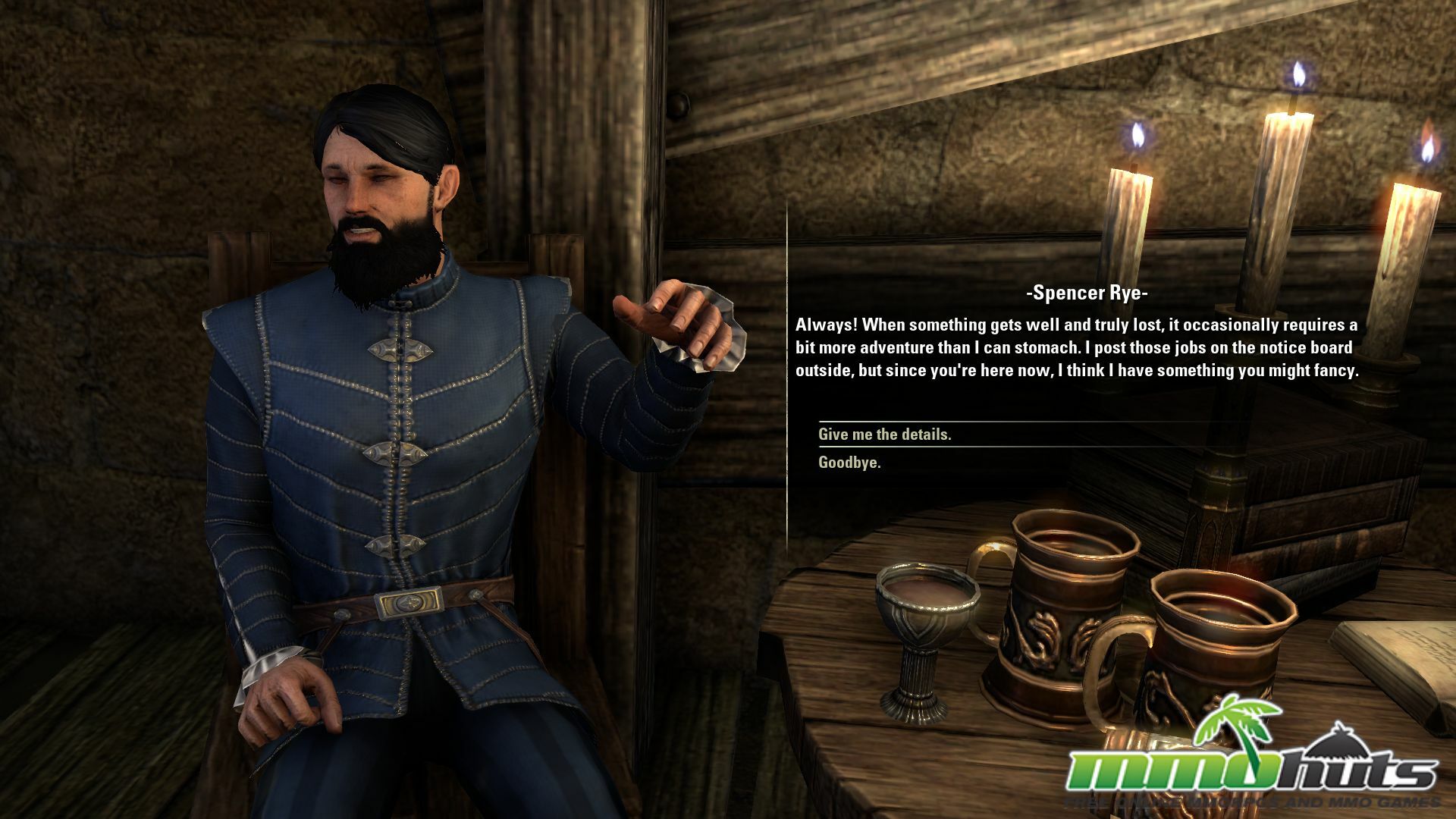 Do enough quests and a colorful cast of characters will arrive to entertain you.

There’s lots of stuff for budding thieves to explore across Tamriel! The area for the Thieves Guild is kind of small, but it’s a beautiful desert region. But I really love the way you can play the game with this DLC. It offers a much needed distraction from the core grind! I’m hoping that Zenimax will offer more guilds if this is popular, and make ESO feel more like a real Elder Scrolls game. That’s the big take away for me; the Guild feels like the first real step to transition the elements of the single player series into the MMO genre. It’s ideal for a solo player expansion. The content is fun and engaging to return to multiple times, and even people who aren’t really interested in theft in game could probably get something out of it, like the passives, or the sweet Camel mount. If you’re a fan of the Elder Scrolls, you owe it to yourself to check this new content out!

Want to see the Thieves Guild in action? Bottom Tier offers a first look of the DLC! 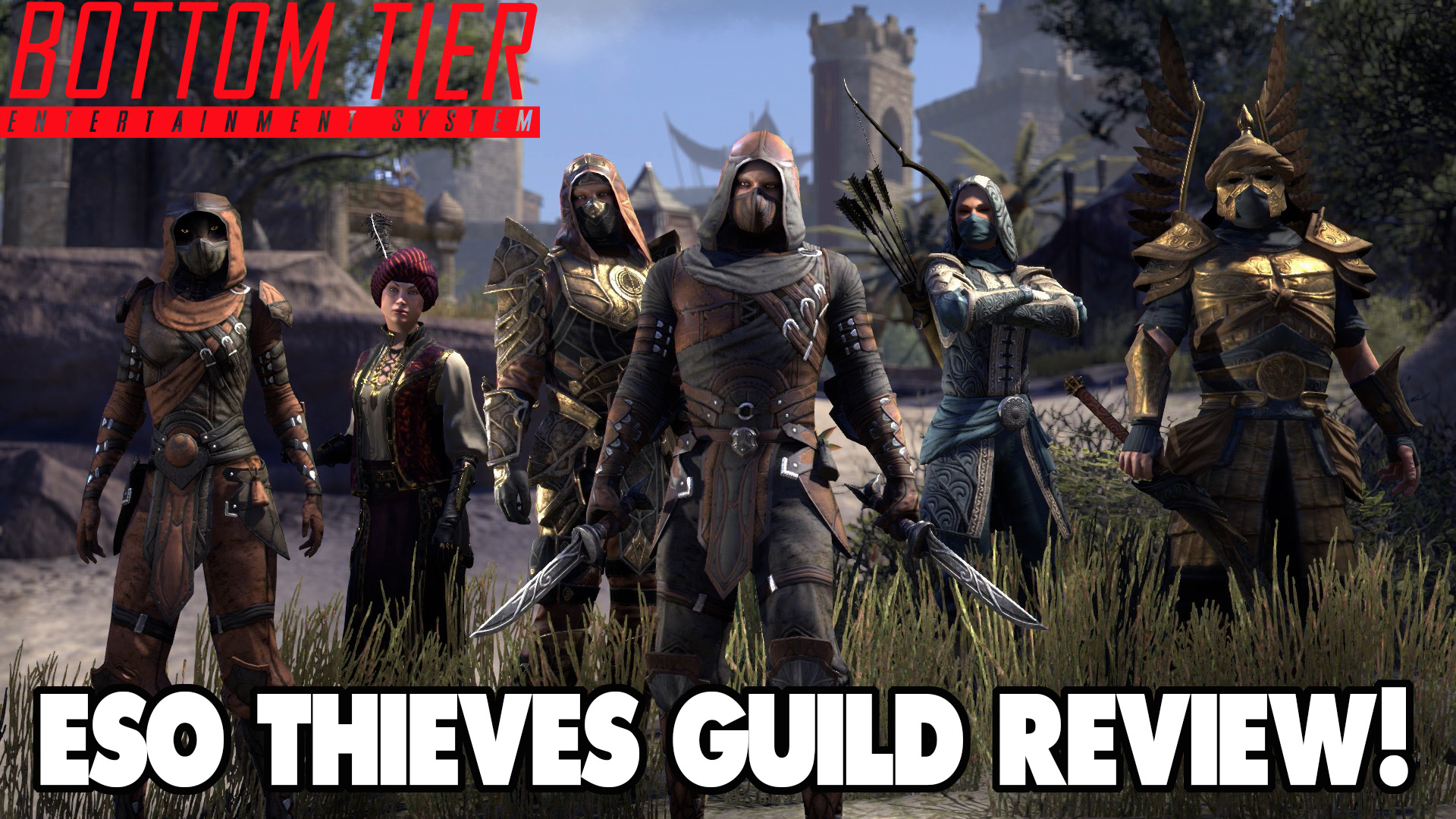