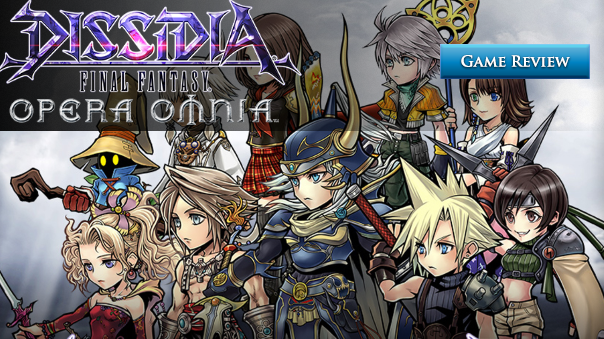 Or, How Square Enix Tries to Cash-In on Final Fantasy

Dissidia Final Fantasy Opera Omnia is a mouthful, but more than that, it’s a relatively fun mobile game. While it’s not exactly the most unique when it comes to features (if you’ve been playing mobile games for the past few years you’ll quickly realize that there’s not much new), it does have a couple of things going for it. First, and foremost, Final Fantasy. With that alone it’s guaranteed to get tons of attention, downloads, and players. Second, it’s a copy-cat game that brings nothing new to the genre, but it does refine what makes this genre of mobile games great time-wasters to mindlessly play while on the train, bus, in the car, lunch, etc. Anyway, without further ado, I’ll jump into the review.

The honest truth is that Dissidia doesn’t have much in the way of customization. I mean, sure, there are plenty of places in the game where you are given choices, but the reality is that unless you make certain choices, you’re going to fall behind other players. The good news is that Dissidia has an awesome story to play through that seems to get a decent amount of content updates. So even if you don’t want to min-max your party, you can still have many hours of fun in this game. 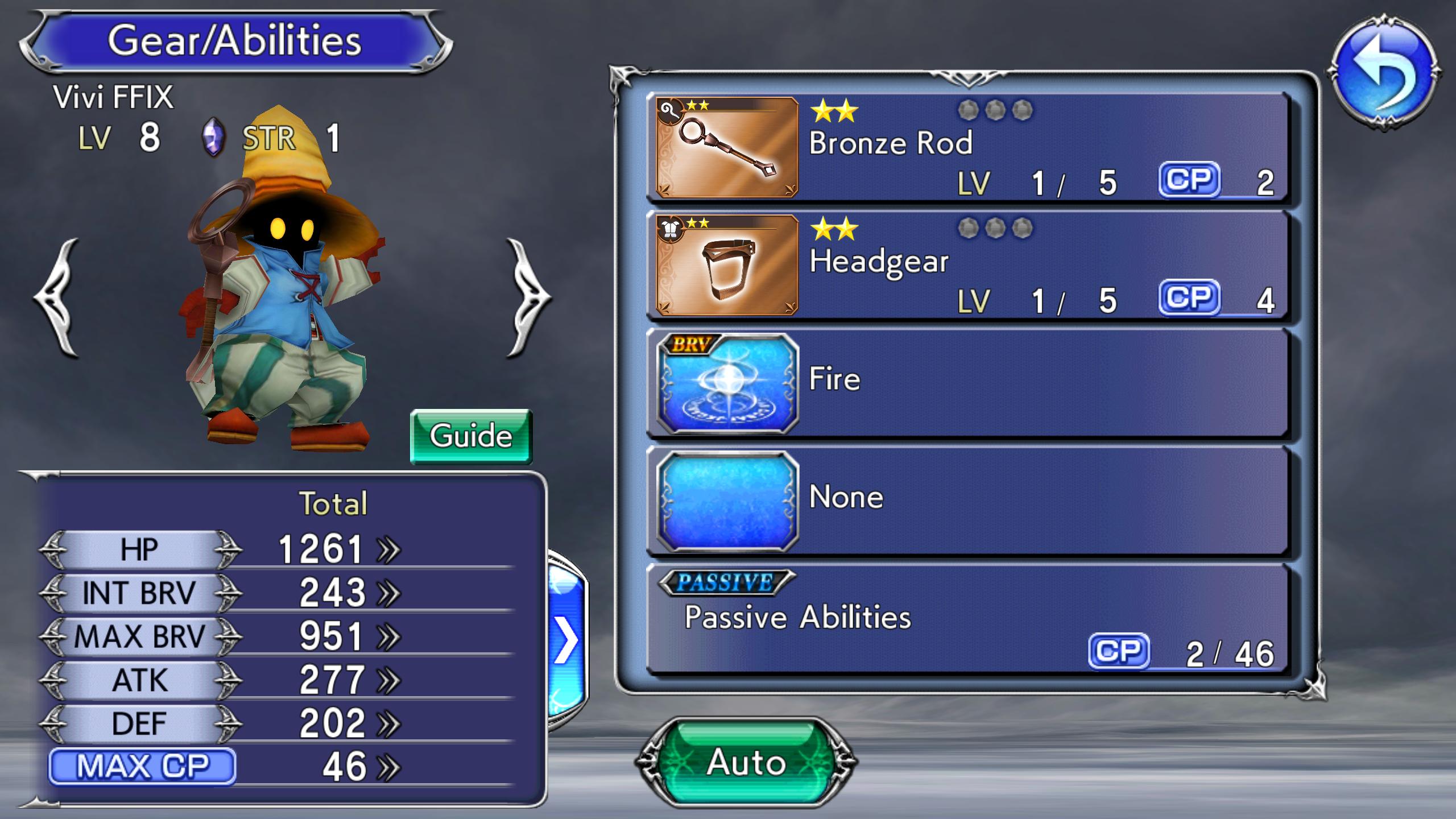 You can customize your party in multiple ways. First, you can choose which characters are actually in your party. These are mostly gained via advancement in the story. This is actually where you’ll have the most freedom. While it’s very clear what the Best-In-Slot gear is (which you’ll want fully and perfectly upgraded), the lines between what makes a good choice for composition in your party aren’t so clear-cut. Other forms of customization are the aforementioned ability to equip gear and upgrade it, as well as upgrade character abilities and a small number of other such features disguised as options for customization but are really just place-holders until you get Best-In-Slot gear/abilities/etc.

The graphics in Dissidia are very nostalgic to the series. If you’ve ever played earlier Final Fantasy games, you’ll find that the UI and art style are very reminiscent of past titles. Judging by the name behind the game (Square Enix), I’m going to say the quality of the graphics were a stylistic choice to help induce that nostalgic feeling, and it definitely succeeds. There are only a small number of exceptions where I can forgive poor UI design and clunky interfaces, and this is one of them. The art in general, though, is quite good even for a mobile game. Sure, the models could probably be a bit more detailed and I wouldn’t be upset at all if the Overworld backgrounds were a bit more vibrant, but I’m definitely not disappointed with what I saw. 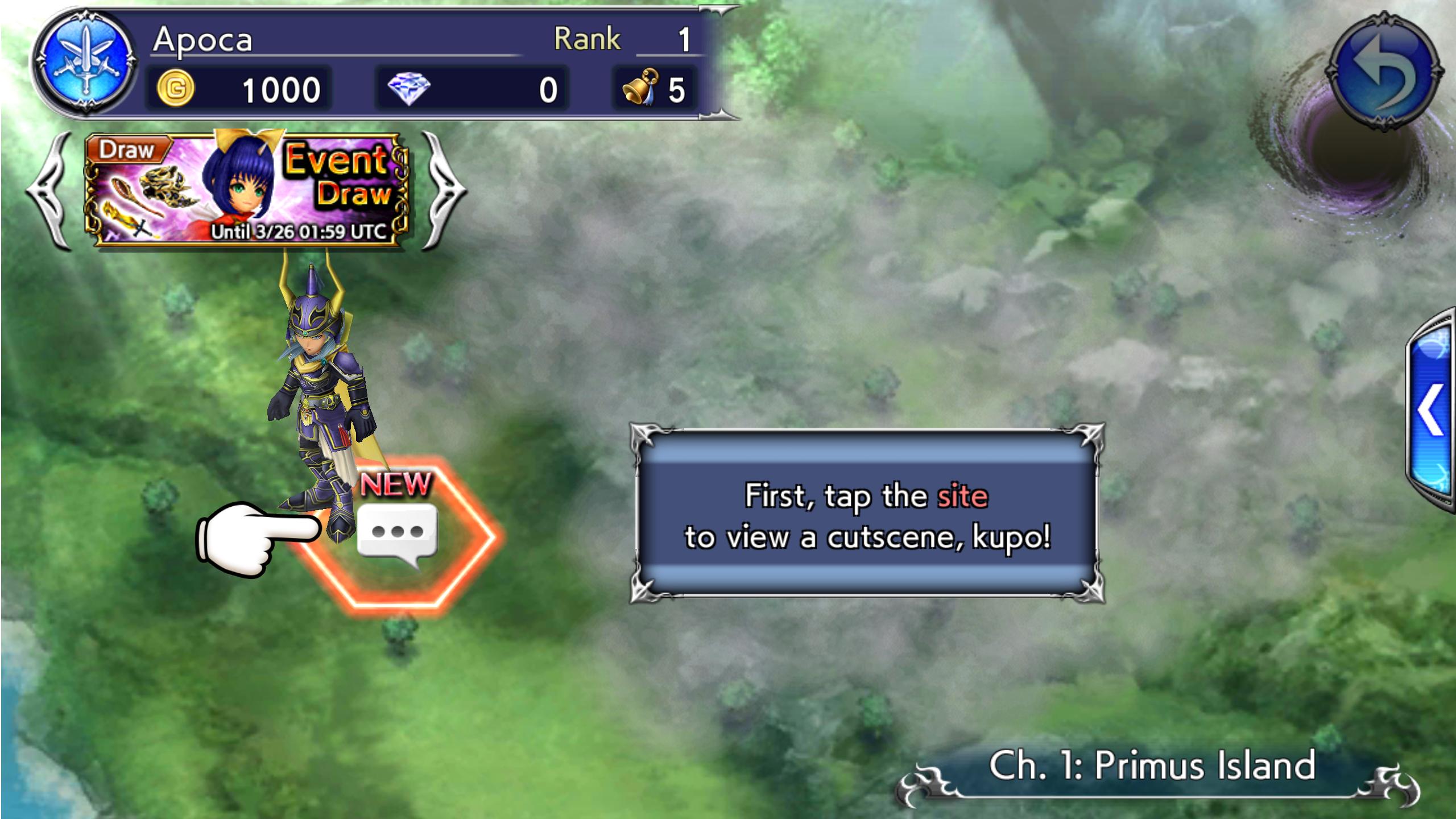 Despite the way it looks, the UI in Dissidia is actually quite responsive. I can’t think of an instance in the three or so months I’ve played the game (it was a great way to spend the down time while at the hospital, which I did a lot the past few months due to a myriad of family issues) where I thought anything negative about the controls. In fact, the only time I did think about the controls was when I was impressed that despite the clunky-looking UI, it was a breeze to get through the menus. If I had to think on it, though, I could say that I wish certain menus would load a tad quicker. But that’s reaching. 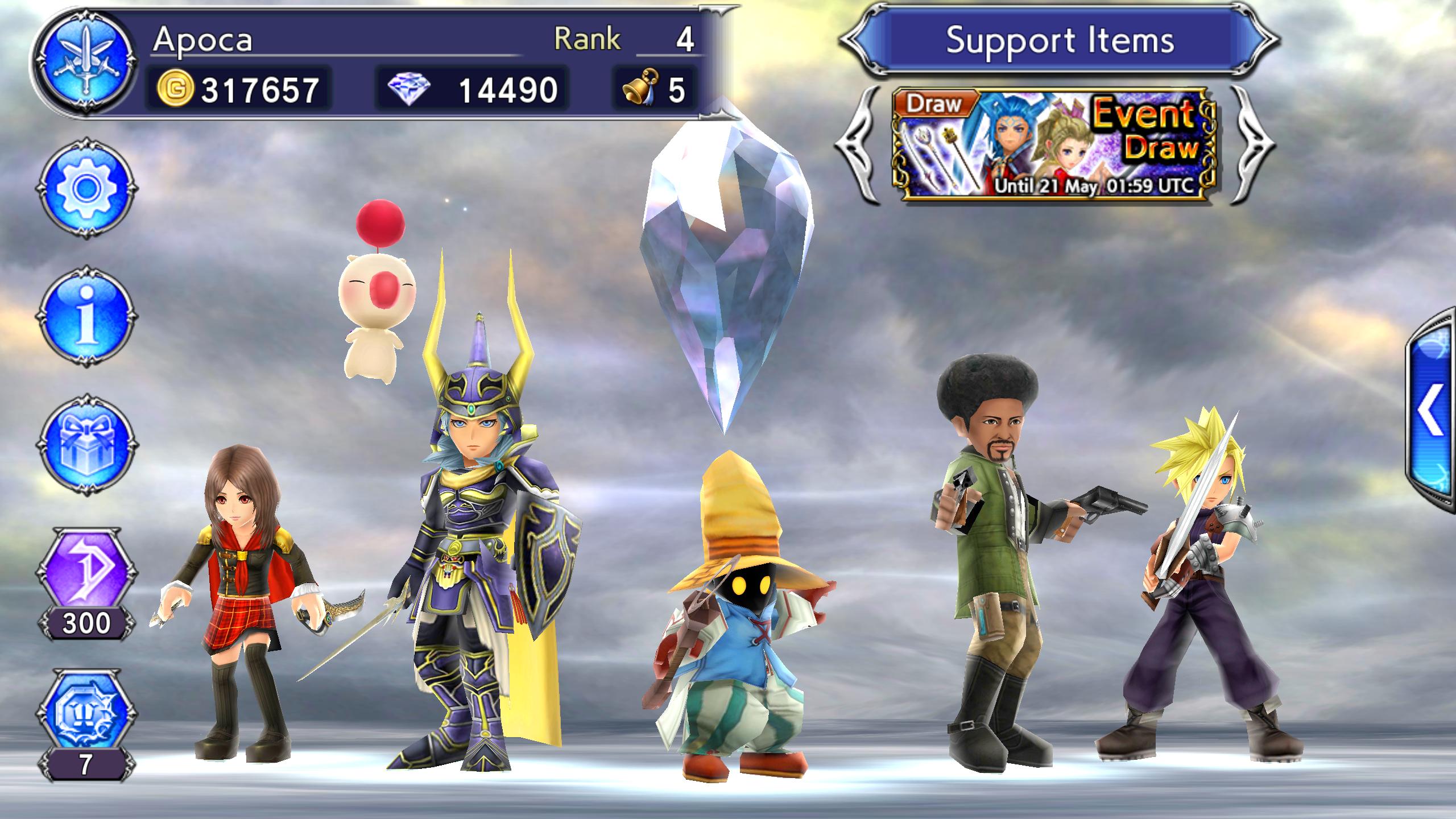 Dissidia is like similar games in this genre of mobile games (think early Summoners War, which is an old favorite of mine). There are technically multiplayer features, but they are not on par with what you would see in a Windows game. Interaction is minimal, with a majority of it being a somewhat confusing (at least early on) ‘friend battle’ feature in which you can pull random strangers (or people you’ve added as a friend) into battle to help you out. Unfortunately (or fortunately?) this can be done when the person is offline and even if they are online there’s no interaction. They may as well be NPCs. Perhaps, though, more features for multiplayer play is on the way. Either way, I don’t mind. I’ve found myself coming back for two reasons: To see how far I can advance and the story/setting. 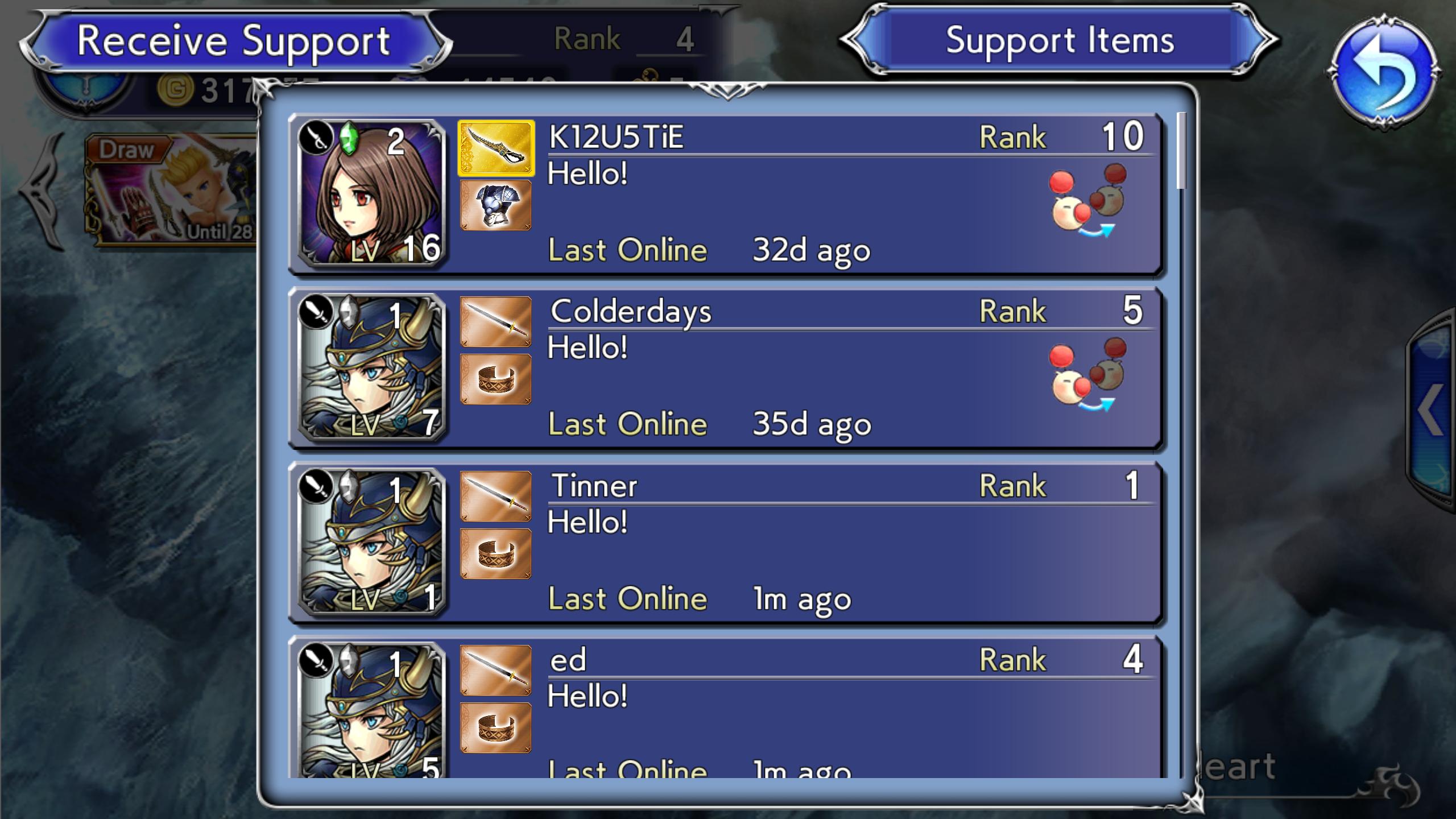 Overall, gameplay is very similar to other games in the genre. You collect characters, level them up, upgrade them, equip them, upgrade their equipment, etc. Your goal is to collect the strongest, closest-to-perfect characters you can get, and then explore the Overworld, unlocking new content by fighting your way to victory. Needless to say, you’re going to be battling a LOT. That is the sole focus of the game as it stands right now, which shouldn’t be a surprise as that is essentially the sole focus of all Final Fantasy titles (and the story, of course). 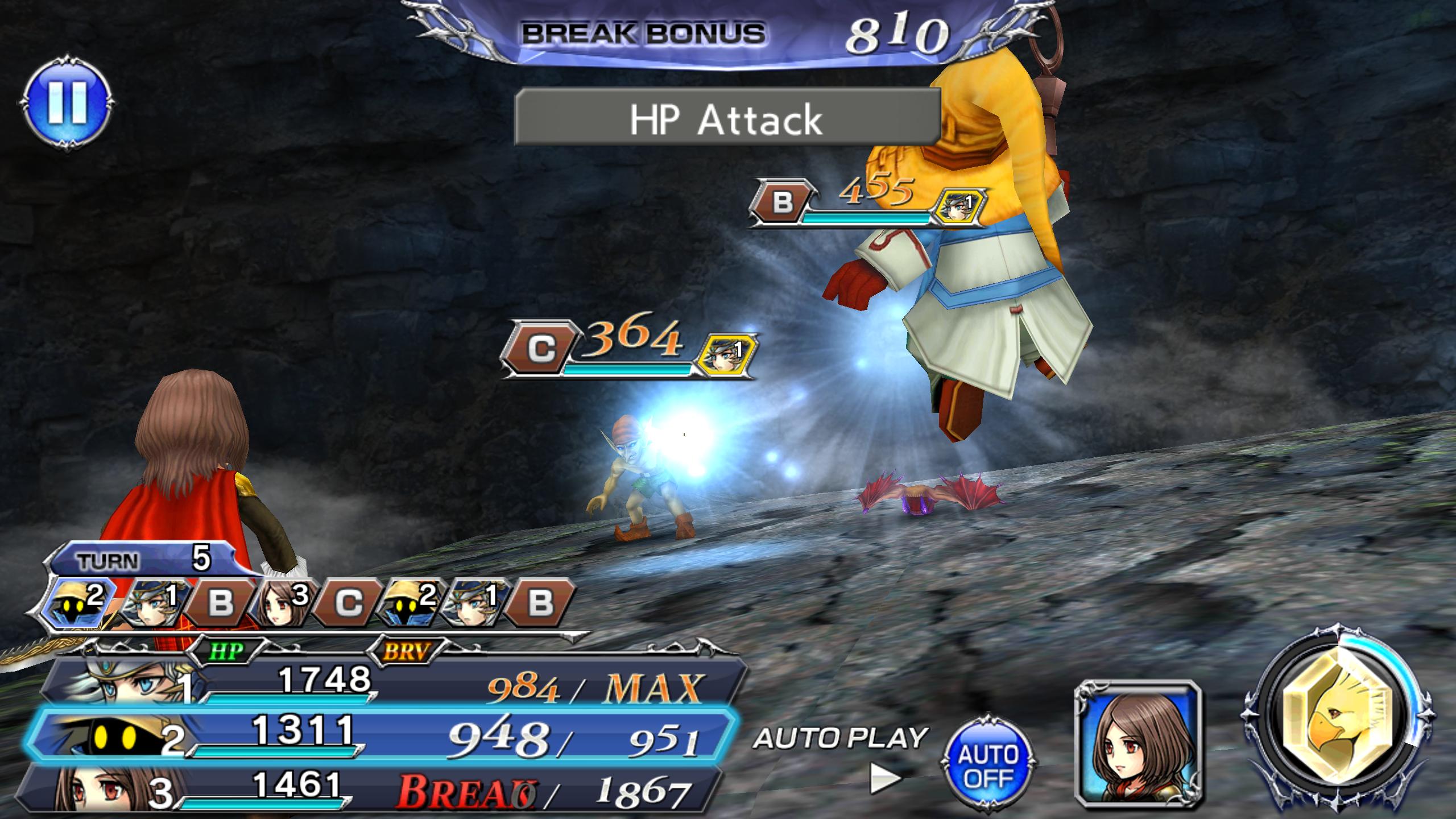 There’s not too much I can say about battle. You can either play it very similar to past turn-based Final Fantasy titles, where members of your party and members of the opposing party take turns activating abilities that will either damage enemies or benefit friendlies; or you can simply activate the fast-paced Auto battle mode which will do just as good as you would have done manually 90% of the time. The game uses a ‘unique’ system of Bravery in order to activate abilities. Attacking an enemy with certain attacks will reduce their bravery, thus reducing their ability to hurt you, while also raising your own bravery. Once you get your bravery to a certain point (dependent on character, each of which has its own separate pool of bravery), you can then activate hard-hitting abilities to damage HP. In a way, it’s strategic. On the other hand, I’ve rarely come across an instance where I actually had to manually battle and make use of that strategy, as the Auto-Battle feature handles almost every encounter stunningly well. Which is a good thing, because this game wouldn’t be nearly as fun for me if all the numerous (and they are numerous) battles required my full attention. 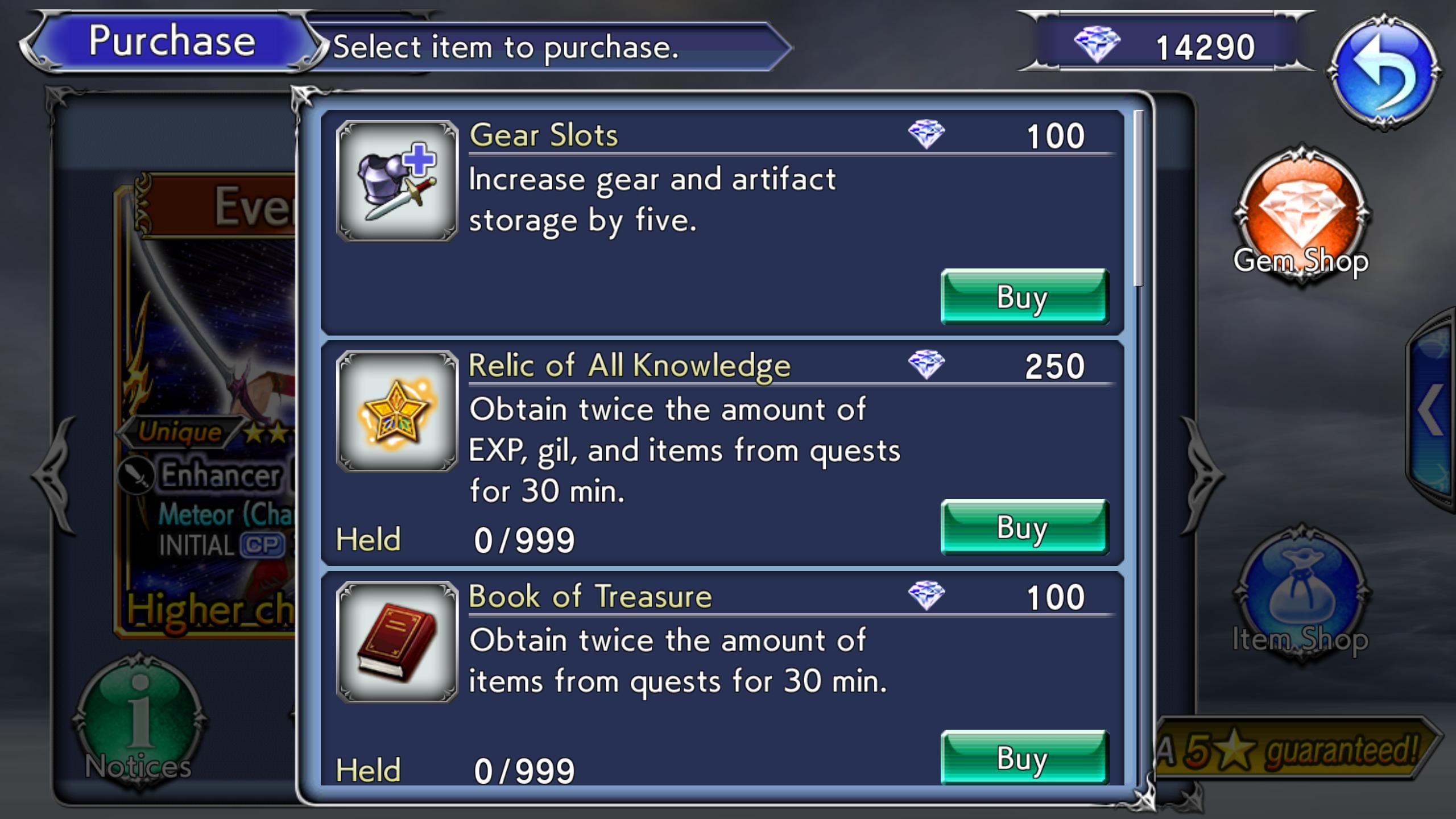 I’d like to close-up by mentioning the cash shop. The game itself is free-to-play, of course, but (as the game likes to warn you when you load it up) you can essentially purchase power by buying currency to use to ‘gamble’ your way to a better party. Personally, I’m not much of a fan of any game that allows me to put in a ton of money, benefiting and advancing because of it. However, as the game currently stands, there’s not too much incentive to try and ‘be the best’ compared to other players. I haven’t found a reason in several months of play to actually put my own money in. Part of that is because the game likes to give you free stuff frequently, part of that is because I unlock most of what I need via general gameplay anyways.

Dissidia Final Fantasy Opera Omnia is a mouthful to say, but it’s also a decent way to spend your time. Would I recommend it over an ‘actual’ game? Not really. I mean you can get Star Wars: Knights of the Old Republic or Jade Empire for $10 on mobile now, and the selection of ‘actual’ games just grows and grows. However, Dissidia IS free, it does have an interesting story to follow in one of the most iconic settings of all time, and we don’t always have the time to play an ‘actual’ game. So is it a good time? Sure. I would have no qualms suggesting someone try Dissidia Final Fantasy Opera Omnia and I imagine they would have a bit of fun.

Overall: 4/5 – It’s been a fun way to spend my free time that was too short to play other games with. If you’re a fan of Final Fantasy, have a phone, and a bit of spare time, there’s no reason not to check out this title.