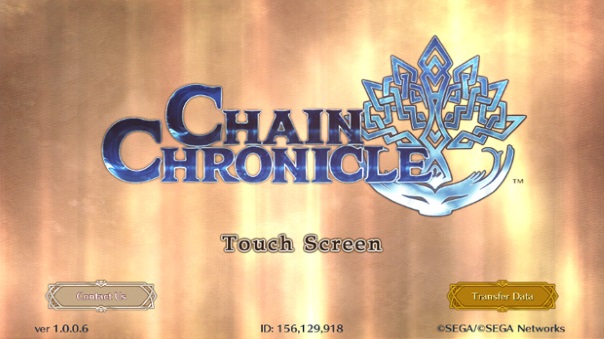 If I were the movie stereotypical mean valley girl of the gaming world, apps would be my flavor of the week boyfriend. I would get a game because it would seem like fun, but get tired of its gimmicks and move on to some other game in eight to ten days tops. If it lasted two weeks, that’s already saying that that game was sort of special. But these days, it’s usually some sort of collectible card Pokemon style with some rock-paper-scissor system and a stamina timer that limits your game time.

Not that I am really picky and unreasonably expectant of free to play games. I know they’re meant to be easy pick-me-ups for casual play and all, but like the movie stereotype valley girl, there will come a time when I would just like to settle for something I can enjoy long-term.

Something I don’t have to uninstall when the beginner advantage curve is gone and the game is too tedious to play after. Sure, I’m not supposed to expect mobile apps to be as engaging as hardcore console games, but lately, some are aiming to be. And one of those games is a little pet project called Chain Chronicle. 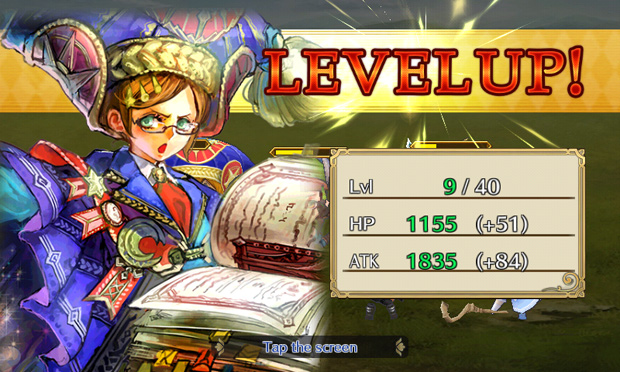 Chain Chronicle is the love child of the legendary Sega and Gumi, creator of the popular app, Brave Frontier. With these two noteworthy parents in mind, one would expect the product to be nothing short of amazing. And, boy, is it epic. Chain Chronicle is a free-to-play line defense RPG.

The game pits you into the boots of a nameless leader of a volunteer army tasked with fighting against the invasion of a demonic force. That may sound generic, but like your main character, there are certain appeals to having a “glove” as a base, as from there you can build up and appeal to anything and anyone. 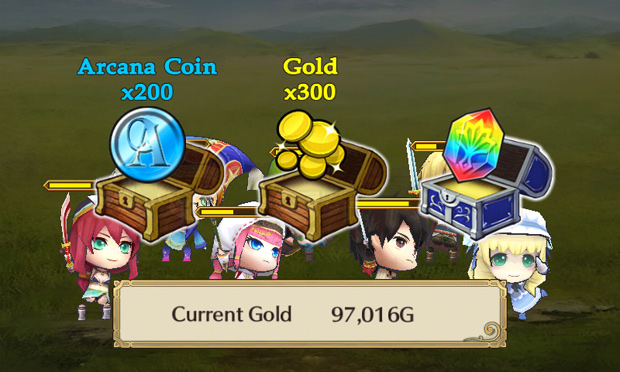 First things first, let’s get the free-to-play aspect clear. True, it means the game has options wherein you can make micro transactions using real world cash to purchase some in-game advantages, like more Prysma (which allows you to purchase rarer units) or stamina fruits (which obviously replenish your energy). Though these allow you to get your character pulls faster and allow you some continuous gameplay, it doesn’t really offer anything that the player can’t get from playing without shelling out some money.

Also, though it may popup some promos and sales from time to time, the game doesn’t exactly harass you into making these purchases, which is okay in my book. 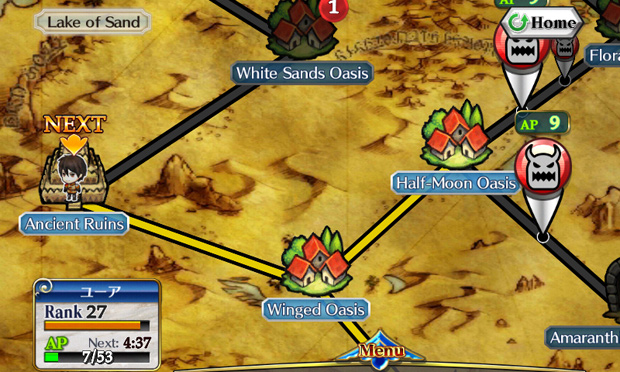 Okay, let’s talk gameplay. The game is mostly played in battles where it is, as I’ve said, a line defense RPG. You take four units with you, along with one friend’s reinforcement unit and two reserves. The reserves only enter the battle when two of your party falls in battle. Your party is initially set in a 3×3 grid while you wait and fight incoming waves of enemies. You can move and switch your characters’ placement anytime in battle, and you can even drag them out of the grid to meet the enemies head-on if you want to take a more aggressive stance.

There’s still the triangle system present, wherein swords beat shields, shields beat ranged and magic, and ranged and magic trumps swords, so unit management is key to beating certain maps. You also have your healer and dancer type classes to provide support. At the start of each wave, you are allotted a random amount of a certain type of mana, denoted by color. Each type of mana is only accessible to their own respective classes. Each character unit is unique and has access to their own set of skills and abilities, which can be activated at any time as long as you still have the right amount and type of mana left in your pool. The round ends when either side is wiped out.

One good thing I like about the game is that you are not required to have the main character in your party at all times. In fact, you can even have him mixed to level up other characters as early as the first chapter (though it’s not really recommended to do so as he does have useful abilities that help beginners adjust to the game). 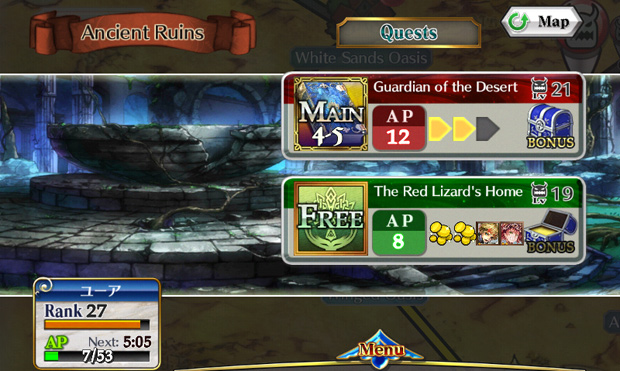 Each character has a story. Seriously!

There is freedom in everything here – who you level, who you add to the party, whose quest you go on first. These are all real questions and decisions you’ll be making in no time. In your first few hours of gaming, you will have access to a lot of unique characters who have their own unique story quests and abilities, thus giving you real options in your gaming experience you wouldn’t really expect from a mobile game. 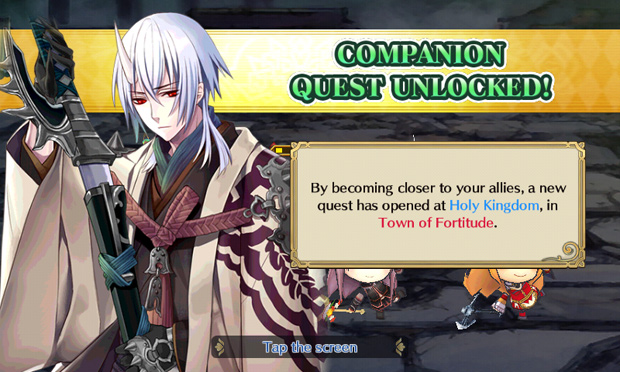 Sure, Brave Frontier or any other unit collecting game offers a wider selection of characters, but Chain Chronicle offers depth for each of them. Each character comes with at least two chapters of their own backstory quests and each instance is episodic and memorable, just like an anime. There are even event story quests and additional chain quests that build on existing social links, that makes the game’s world feel so vast. 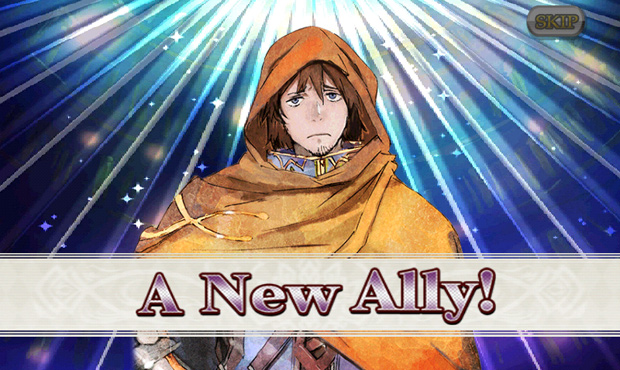 The writing isn’t half-bad either. Each story quest brings out the personality of the characters in question, and the moods range from light-hearted comedy to simple goofiness to some melancholic drama, and none of them disappointing. I can guarantee that you will look forward to everything, even your 1 star units. The closest thing I can compare it with is probably Suikoden or Fire Emblem, which says a lot coming from a free-to-play app. 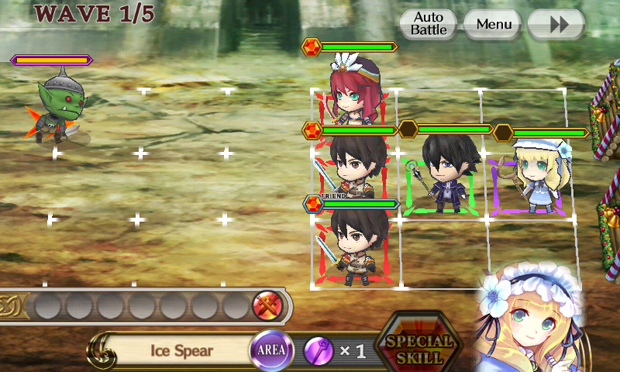 Aesthetically speaking, Chain Chronicle is solid and cutesy. In battle, all your units have a unique Mii-like appearance, rendered and animated beautifully with their own special effects. Same goes for the enemy units. The character art, which appears in splash-ins , story mode, and your ally gallery are all beautifully done by different artists which entices you to expand your hero collection even more.

The story mode develops into a visual novel-like progression so it’s always entertaining to follow the story. Big thumbs up though to the fact that this RPG is also fully voiced. And it’s not with just some random VAs. You have bigshots like Maaya Uchida and Ayane Sakura yelling out for you in battle here. As an otaku and a VA-afficionado, this tickles me the most. 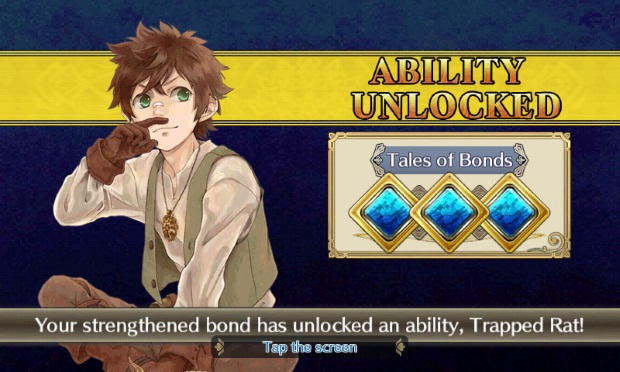 The worst thing I could possibly say about the game is that waiting on the energy system takes too long, but I can’t even complain about that. The eight minute to one energy is actually a good limiter in controlling your game time as it makes the game something you casually pickup every six hours or so and not something that devours your entire life (though I may beg to differ). Even the drop rates for quests and event prizes are generous enough that I really have nothing to complain about.

In terms of social interaction, the most you could get is adding your friends and having them reinforce you in battle. No PVP, no guilds, no arenas. It’s basically just like a good old single-player RPG but with an online login. 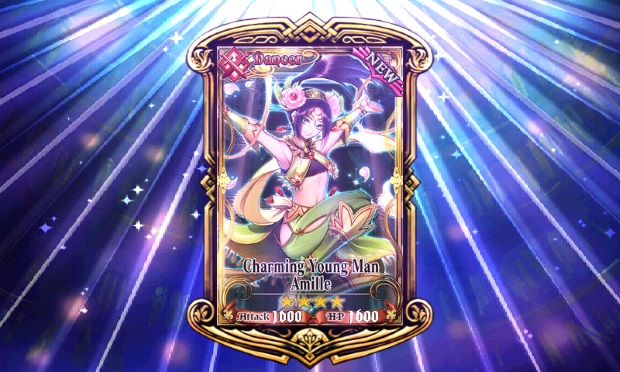 All in all, as you can probably tell from the way I fanboyed from Jamaica to Jakarta, Chain Chronicle is an absolute must-play. Sega and Gumi did a really good job with this game, and I’m actually quite excited to hear that they have tons more content in store for Chain Chronicle. Sometimes I actually don’t want to endorse the game to you guys so I can just keep this to me and my friends, but what the heck, the game is that good that I will call you a loser if you haven’t even tried or heard of it. I rank this game ten stars out of five.