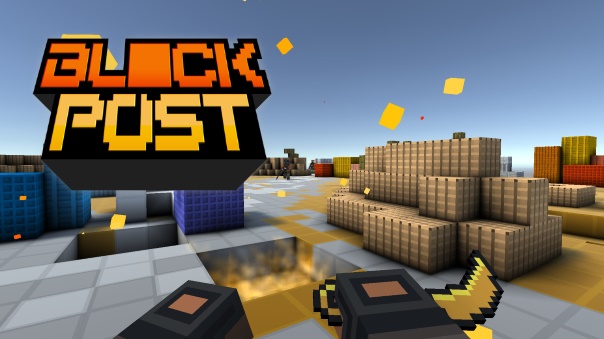 Both in my time as a reviewer of digital entertainment and before, I have come across a number of worthy voxel titles. Minecraft, Castle Miner Z, and Boundless come immediately to mind. There are others, sure, and some less than stellar voxel games. So I wasn’t too terribly hesitant to take a look at Blockpost, based on it being a bloxel FPS game.

As a FPS game, Blockpost is, in the most basic and minimum, decent. You get a primary gun, a backup sidearm, a melee weapon, a choice of grenade or power ups, and a block. Yep, a block. You can actually build during the match. You can also remove blocks. It’s a fairly decent strategy at times, even.

Now, the loot chests themselves are cheap. Goofily so. Buuuuut you also have to buy the key. Which.. is also pretty cheap. The chests are random though, so you can’t count on getting what you’re after from the first one. You may end up spending 5-10 bucks cycling through chests until you get a specific weapon.

Now, you could argue that chests are granted from leveling up, as are keys, and you’d be right. But it doesn’t really even the playing field, as only certain chests are granted this way. Other chests can be gained by completing ‘feats’, such as kill 1,000 enemies by headshot with sniper rifle. That should only take you a few weeks of dedicated play. So long as you don’t repeatedly die from one-shots to the guy who got ahold of his mom’s credit card to buy a bunch of chests.

I don’t mean to sound bitter. I enjoyed my brief little sojourn into Blockpost well enough, I suppose, and it is after all a free to play title. Really though, it combines many of the worst aspects of online arena games such as Paladins and Overwatch, without the production value or originality that make those titles what they are.

Also, while I did mention the combat is okay, I had a real problem with the fact that you can’t even aim with guns. No iron sights, no scopes (even though there are sniper rifles), nothing. Right clicking just doesn’t do anything at all. The movement is also very very twitchy, and a couple times people did things on spawn points that broke my character and wouldn’t let me move or take any actions until someone walked up, shot me, and I respawned again.

My final advice is: Just don’t. The game doesn’t offer enough to offset its pay to win nature. There’s virtually nothing to it that’s even worthy of commenting on. No amazing new arena types, no really engrossing maps. Heck, the store page claims there’s something ‘procedural’ about the game, but I sure didn’t see it. Don’t get me wrong, I understand that cash shops are a necessary thing. I don’t even think they’re evil. There’s cash shop though and then there’s pay to win. What’s most important is that we don’t want to encourage this sort of half-baked cash grab from developers. At the end of the day that’s really all this appears to be.