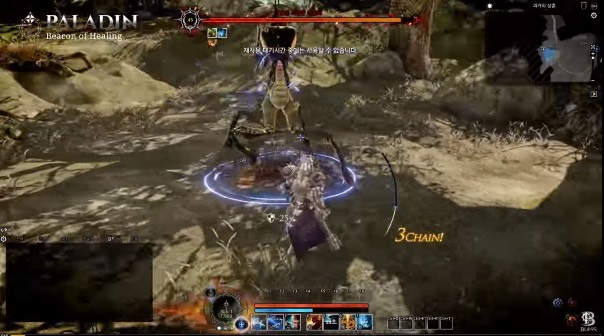 Bless Online is steadily approaching its Steam Early Access launch, and the Neowiz team are showing off all five classes and how they’ve been reworked/rebuilt to be engaging, interactive and far more exciting than they were originally. So today we’re going to go into each of the five classes briefly. Please note, these videos were taken in a development environment. These do not reflect the final versions of the characters. Each of these classes are unique and require different tactics/strategies to exploit their power and gain an edge on their enemies.

Guardians are commanders of the battlefield, protecting both their allies and the front line combatants. Every time a Guardian uses a combo, they will gain bravery (their personal resource). Once that meter has filled, players can change their stance to activate the [Enhance] effect. When Enhance is activated, guardians receive additional effects to help them in their tasks. However, the Guardian needs to use the Enhance effects before they wear off, otherwise, debuffs are applied instead. How well a player uses these powers will determine how potent of a Guardian they really are.

Berserkers have a few ways to approach a fight, depending on what stance they are in. This will apply either the [Blood Leech] or the [Bleed] effect appropriately. Blood Leech is a defense effect that reduces damage received by recovering a portion of health based on damage inflicted. Bleed however is very high-risk, high-reward as it consumes a set amount of your health per use to increase the amount of damage dealt. Players can tackle Berserker however they feel, but have three options for base playstyles: Deadly, Defensive, and Balanced. The more balanced route allows them to be off-tanks, but ultimately it is up to the player how they want to do battle.

Silent but deadly is the motto of the Ranger. Noone will see them coming, but everyone will feel their wrath. After the draw back their bowstring, their presence will be announced with that arrow that is fired. Rangers are capable of either dealing tons of damage or acquiring beneficial effects in combat as you increase the Prudence resource and minimize movement. Prudence is used in stance switches, and making the mechanic work well in combat for the Ranger was the main focus in the redesign.

The Paladin will bring light and justice to the battlefield. The third hit of their combo is always a buff, so by changing the buff used, Paladins can fill the role of a healer or a damage dealer. They have fewer combos than some of the other classes, they also require more tactical skill, choosing the right combo for the right situation. Knowing when to increase your healing powers, despite having low mana and when to use a recharge-mana combo is incredibly important. Understand the combat situation is key for Paladins.

Mages have absolute mastery of the elements and leave quite the dramatic impression upon their foes. Mages use a stance-changing system to move between fire, ice, and air element sand can gain bonus effects by consuming elements through certain skills. These additional effects differ per stance however, and per the element being used. For further depth to this class, mages were redesigned so that players must choose carefully for what situation they’re for various additional effects.