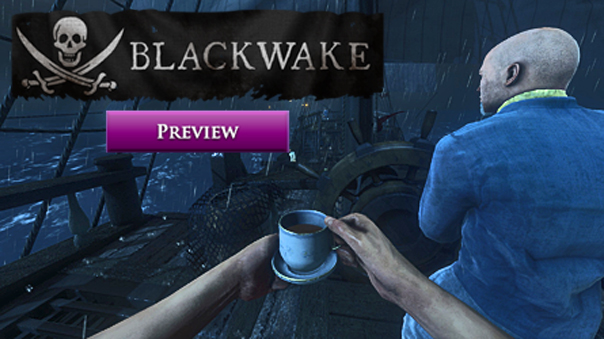 Do you love pirates?  Fancy being a sailor in the Golden Age of sailing?  Perhaps take up arms for king and crown?  Well, even if those days are long past, there are several methods to relive those sordid times.  Blackwake, by Mastfire Studios, seeks to capture that feeling in a way not often expressed:  team based naval combat.  Except unlike most games that put you in control of your ship, Blackwake, instead, thrusts you into the role of a crew member.  The name of the game is teamwork here, but how, exactly, does it fair? 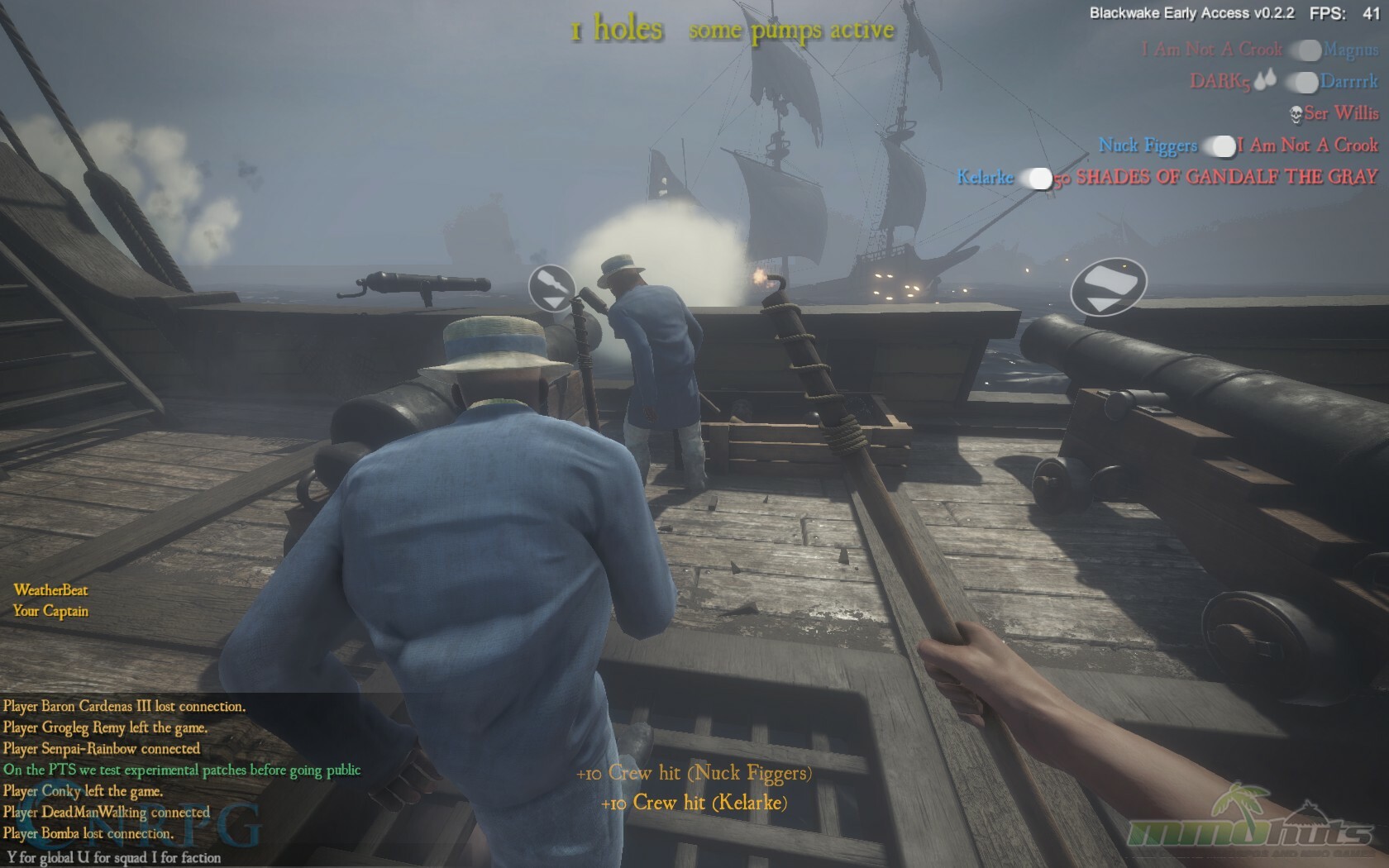 The window of opportunity to fire on an enemy ship is so small, that things get real hectic.

Let me establish one thing real quick:  Blackwake is more akin to Master and Commander than Pirates of the Caribbean.  If you don’t understand that reference, well, I am ashamed of you.  There are some aspects of Blackwake that are simplified, however, don’t expect to fire a cannon just by walking up to it and pressing fire.  Similar to how you’d actually fire a cannon, you’ll need to powder, load, ram, push it forward, then ignite it.  Each of these steps take some time, too.

“All of that to fire a cannon?” I hear you ask.  “How can that be fun?” you might lament.  Keep in mind, Blackwake focuses on a realistic crew dynamic aboard a ship. You’ll have a captain calling out orders and the rest of the crew scurrying about to fulfill them.  Brush up on your nautical terms for this one, guys; you’re going to need them.  A good captain will ensure his crew is working quickly, efficiently, and smoothly.  To wit, don’t try and be the captain when you’re just starting out.  It’s a quick way for a mutiny to break out (literally, the vote to remove your captain position is a mutiny — a nice touch).

On that note, at times I wish the mutiny option was more readily used. When you get two green captains going head to head, and neither side understands the power of the hook shot to wreck the enemy’s respawn time, you will end up in ship duels that go on for 20+ minutes until one side simply runs out of the respawn tokens and is forced to surrender before their ship sinks. The game is fun… but when you go into a 20 minute all out brutal war with no real tactics involved, it can become exhausting. 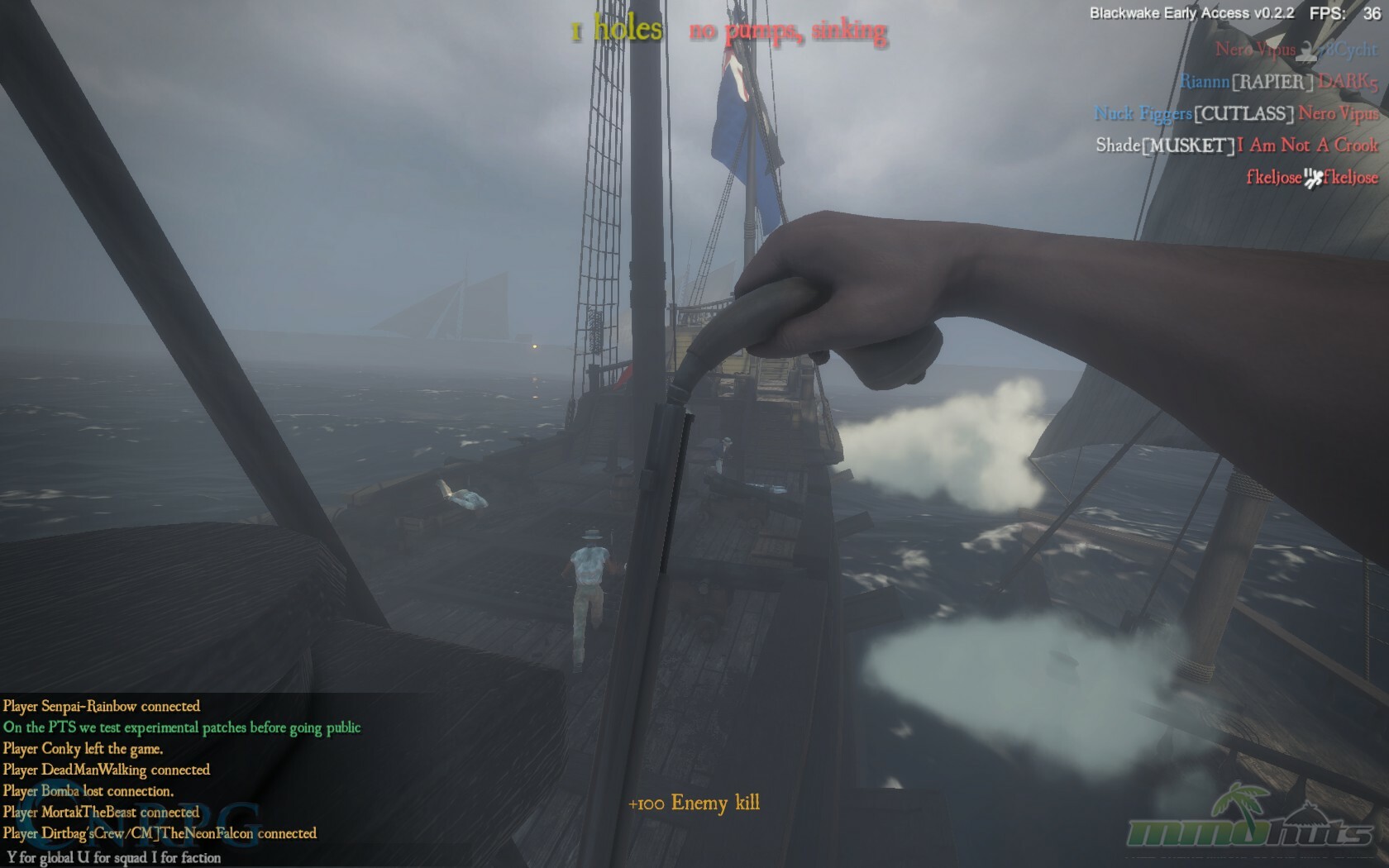 Aim your shot carefully. It can take roughly 20 seconds to reload some of the weapons!

The obvious objective here is to sink enemy ships.  There’s also those pesky enemy crew members to deal with too, so you’re going to have to rely on guns and swords to get the job done further.  A lot of the guns in the game have various advantages and disadvantages in crew combat, and everyone will have a different feel for which is good or not.  That’s one of the nice things I’ve found about Blackwake: taking away the reliance on having certain classes allows more balance to be made with the guns and swords instead.

Everyone also has access to a repair hammer, which is essential in keeping your ship afloat.  You see, cannons have this nasty habit of blowing holes through wooden hulls, so it’s up to you and your crew to repair them in the very likely event you’re facing off against a fleet of enemy ships.  Also, holes in ships tend to have a nasty habit of letting water below deck.  Taking on water is the number one cause of ships sinking, so man the pumps once you’ve repaired your ship!  Repair is one of the more simplified actions you can take, too, so don’t be ashamed to toil away. Chances are when you’re starting out, you’re flat wasting your time shooting cannons. So make yourself useful and repair a hole or pump some water to let the crew that know what they’re doing make themselves more useful. 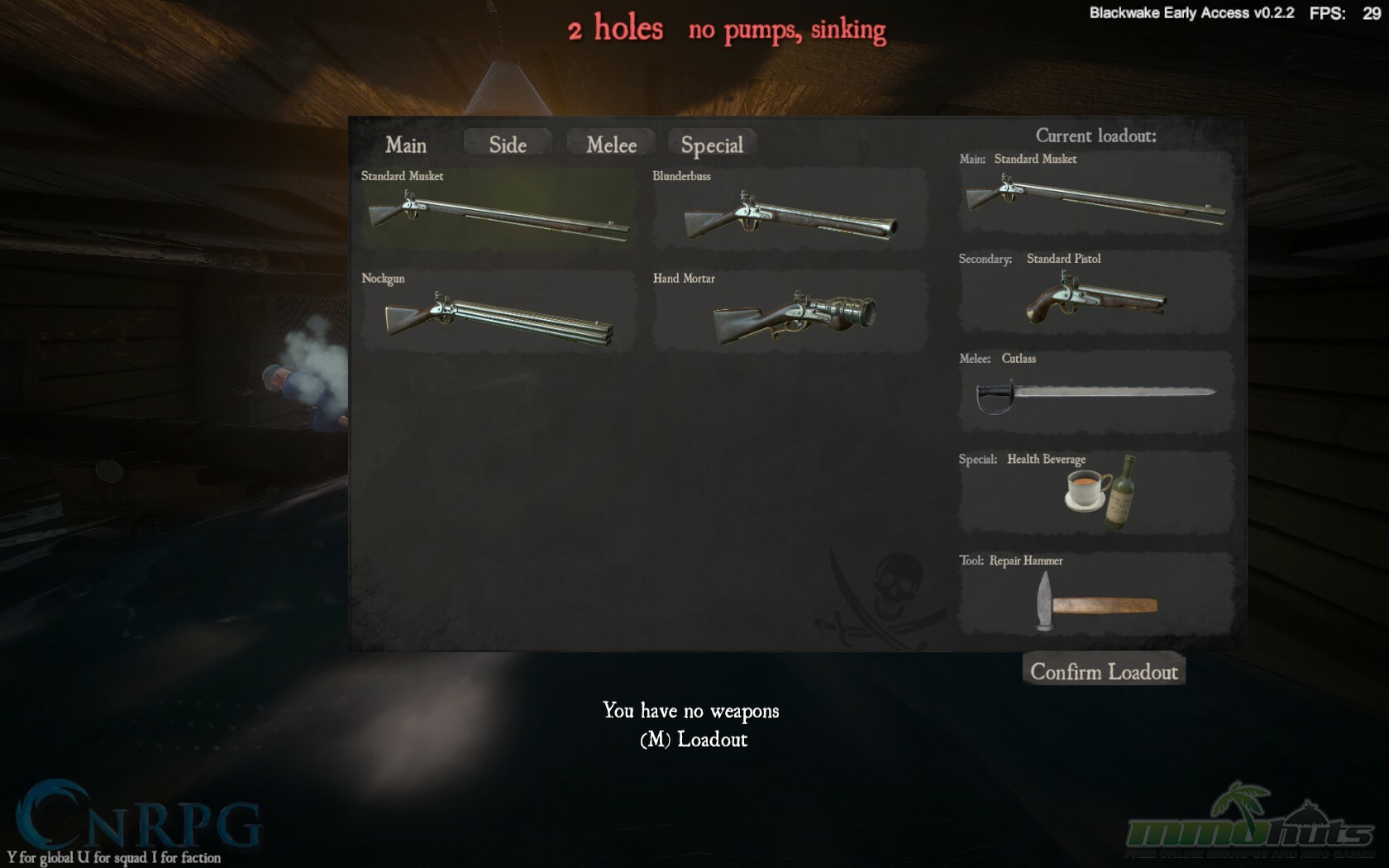 Each weapon has unique perks and quirks. Try them all and see what works best for you.

At the time of this article, there are only two game modes in Blackwake: Team Deathmatch, and Capture the Booty.  The developers do promise more will be coming as the game goes further in development.  Even in the TDM format, they have quite a bit of options though.  You can have a full fleet, or just a couple of ships facing off against each other.  I’ll be curious to see how they handle additional modes in a similar fashion.

Capture the Booty is a capture-the-flag style mode, except instead of each team having a flag, a central island houses a treasure for either side to claim.  While this mode retains the ship to ship combat system Team Deathmatch poses, there’s also an additional element of when to have your crew disembark to fetch the treasure.  Keep in mind, a ship without a crew is incredibly vulnerable!  The first team to grab that booty and bring it home wins the match.

A rare calm moment amidst the chaos.

State of the Alpha: Good

If you’re looking for a fanciful, easy-going naval combat game, you’re definitely going to want to look somewhere else.  Marketing wise, the game currently shows itself in the light of spectacular plays and amazing comebacks.  The meat of the game is much more challenging, and much more difficult if all you’ve watched are those clips.  Getting a bunch of people together without a strong leader to guide them can be an exercise in futility.  Exacerbating the problem are any number of problem players whose sole purpose is to make everyone’s lives more challenging.  That was one of the biggest pitfalls for me while I was checking the game out.

It is also incredibly new player unfriendly.  You’re not going to be able to walk into the game and know what to do in your first match, because you’re literally thrown in without any tutorial of any sort.  I’m not advocating the use of tutorials in everything, but it’s definitely helpful to check out a couple discussion threads on what to do in the game first.  Blackwake is currently in Alpha testing, and updates semi-frequently.  Keep an eye out for more news and information as the game develops.