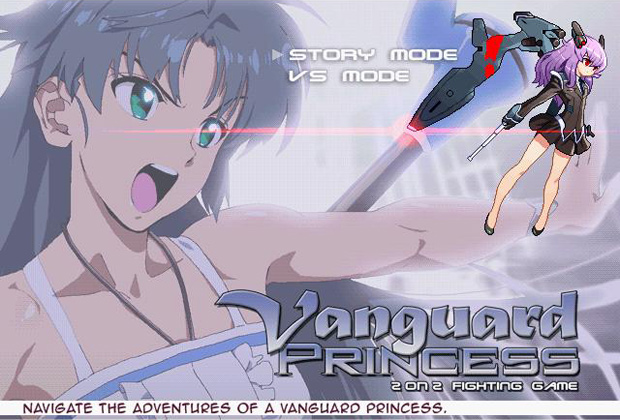 Vanguard Princess also known as VG is a P2P 2D fighter available on Steam. Created by former Capcom developer Tomoaki Sugeno and published by eigoMANGA the game transports players into a world of super-powered female fighters after a blotched government experiment results in a massive cosmic shock giving young girls special abilities. While some ladies embraced their newfound gifts others felt cursed and seek revenge. It’s up to players to battle against an all-female cast of skilled fighter and save the entire human race in the process. In this 2-on-2 fighter players can choose from 10 different characters. Each femme fatal has an assigned assist character that will fight alongside them in battles. Currently Story and Vs Mode are the only two playable modes available in the game. 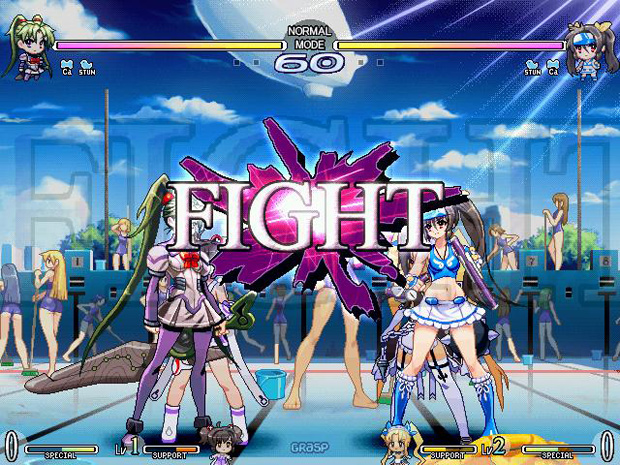 Don’t Bring a Knife to a Gun Fight, the Gameplay

Players get to jump right into the action in Vanguard Princess. After a short cut scene introduction players are taken straight to the menu options screen where they can select femme fatal and desired game difficulty mode. Easy, Normal, and Hard are the three available options. The first thing you’ll notice about the game is the awkward controls. Honestly, I recommend using a PC gaming controller with VG. There’s a steep control learning curve and the commands are way too lengthy and complicated for the quick arcade-like pace of the game. Button mashing is key for a victory but manually holding down arrow buttons while tapping Ctrl J +B just to execute a single ‘Liberty’ or combo move is a pain. Even if you gain a knack for the controls, the progressively rising difficulty will surely rise faster than you can increase the speed of your combo inputs. Attempting to perform awesome moves like the Heavenly Thunder, Wind God Two Step, Super Blazing Gale, or Hizakura Eye while two other opponents are coming at you is tough if you’re fumbling at the designated keys on your keyboard to attempt them. 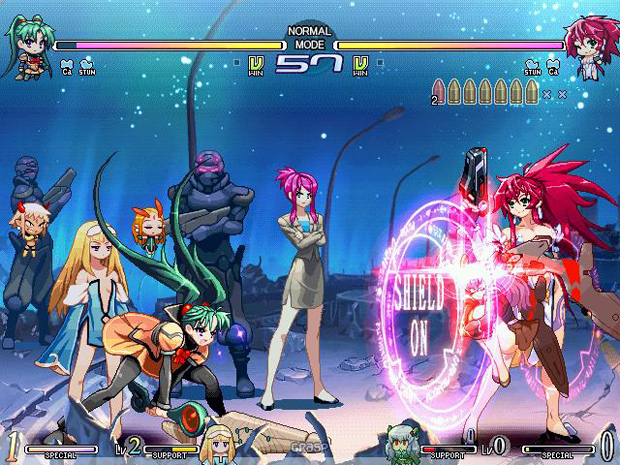 One of the coolest but most frustrating elements in the gameplay is the disparity in each of the character’s weaponry and fighting abilities. For example the character Luna is armed with guns while Yui only has a sword and some characters rely solely on magical attacks or martial arts tactics for combat. The variety makes the gameplay interesting but extremely challenging at the same time. As the saying goes, don’t bring a knife to a gun fight because most likely you’re going lose. Players will find themselves up against some pretty and deadly women who won’t back down. At one point I found a team consisting of one fighter blasting rounds of bullets at me while her tag team partner was blocking interference with a defensive spell, and their assist character was supporting with lightning bolts. The chaos definitely adds to the fun factor of the game. 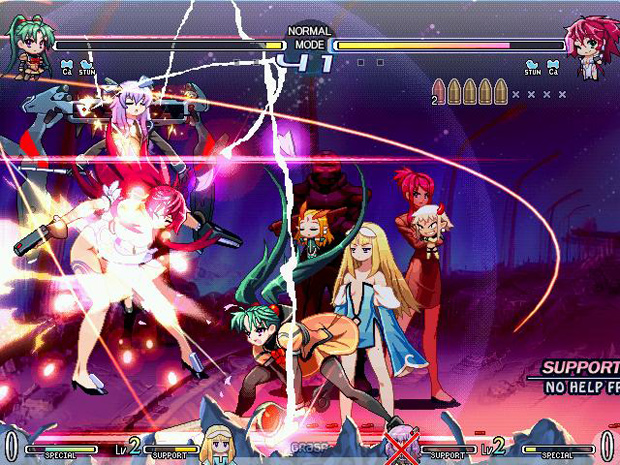 VG feels like a seductive version of one the old school Capcom fighting games that we’re all familiar with. As players progress they’ll fight their opponents in new environments like a park-setting with lush greenery, busy downtown market places, inside an empty pool, at night in the war torn city streets, and on a hilltop in the midst of a bad thunderstorm. The graphics are impressive for a 2D fighter. Similar to the game Rival Schools, during high-powered combo moves camera viewpoints automatically zoom in and out. Periodically, random face close-ups of the characters almost leaping out of the screen appear too. 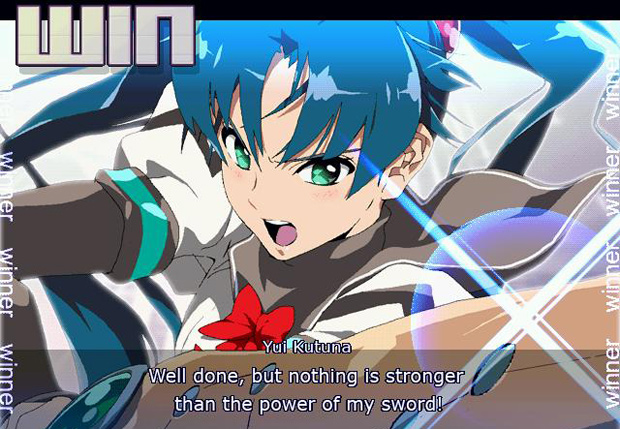 The only difference from Story mode and VS is the amount of text dialogue. Experience in the game is momentary. A player’s XP and current level earned in each round diminishes with every hit and often resets which makes the objective of the game more about winning streaks than evolving the character.

Much like the Dead or Alive fighting game series and their sexualized characters like Kasumi, Vanguard Princess features a complete ensemble of female characters. Luna Himeki is promoted as the only lady in the game that doesn’t wear panties. When she performs a particular move randomly you’ll get a glimpse of her unmentionables, slightly masked with a heart tattoo. A wardrobe malfunction that is seldom seen in traditional fighters but VG seems to pull it off. 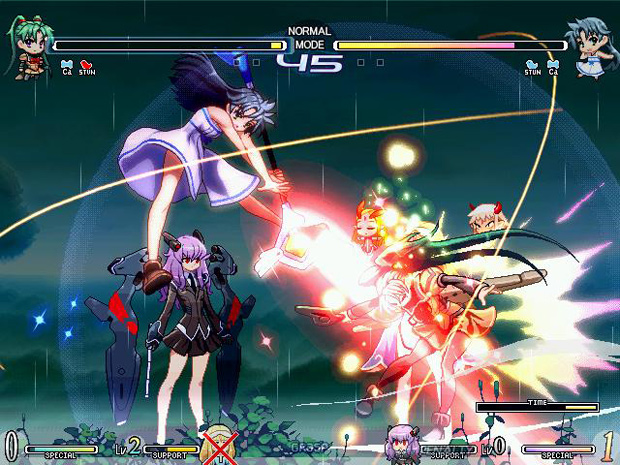 As the famous Porky Pig so eloquently put it, “That’s all Folks.” Vanguard Princess isn’t one of those games with heavy storylines or in-depth gameplay. It’s a really difficult to beat PC fighter available on Steam that you can play if you’re into hot anime chicks and kung-fu. The texted-based dialogue and cut-away scenes, in my opinion didn’t mesh well with the rest of the gameplay’s fast-paced action style. 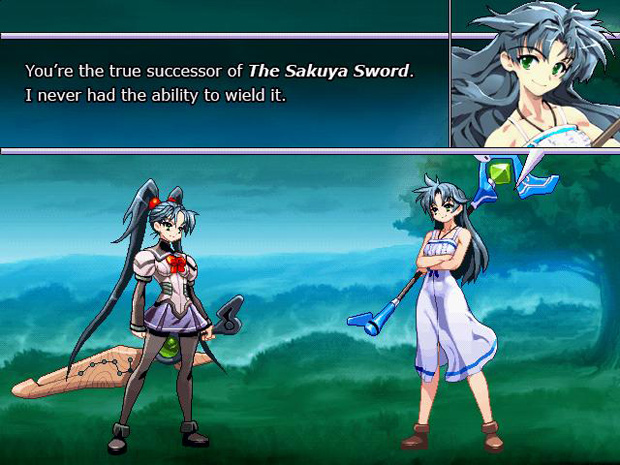 You have this intense balls-to-the-wall melee match with bullets flying and magic fairy dust powder bombs getting dropped, lots of Japanese banter or maybe some trash talk going on in-between who knows, and then you’re taken to a still image and forced to read drawn out dialogue that’s doesn’t actually tell you anything as far as the plot or character progression goes. For character customization, there is none. The lack of ability to gain additional life, purchase potions or an upgrade makes the game a little one dimensional. It follows the old school style of Street Fighter in which players will eventually face-off against themselves. Ryu versus Ryu and in the case of Vanguard Princess it’s Kutana Yui battling another Kutana Yui. It’s the quintessential 2D PC fighter with a sexy spin to it. 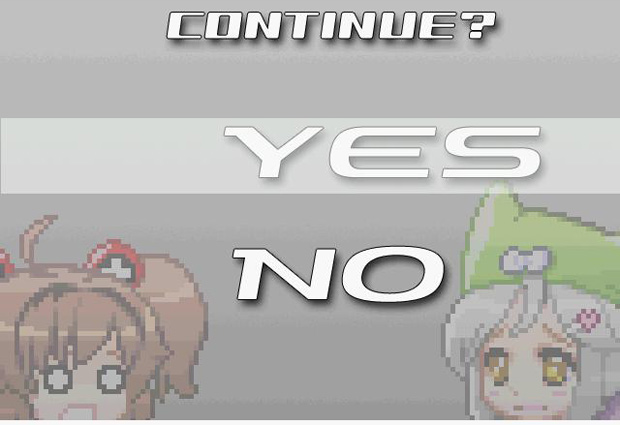 Overall Vanguard Princess is a fun game. The scenery and gender is different but the action is the same. Players become a super-powered female fighter on a mission to destroy an evil villainess planning on exterminating the human race. Apparently that’s all you need to know. Players choose their character, game mode, and then commence battle. It’s a sexy revamp of Street Fighter. Although it has a muddled control system that players have to work with, the game is fast-paced and challenging. Anyone that’s a fan of Capcom, fighters, and Anime will enjoy playing Vanguard Princess.